Both Bloomberg and Sanders have teeny tiny leads over former Vice President Joe Biden, who took a beating in both Iowa and New Hampshire.

The Florida poll shows Bloomberg with just a one-point lead over Biden, with the ex-mayor receiving 27 per cent support from Florida Democrats compared to Biden’s 26 per cent support. 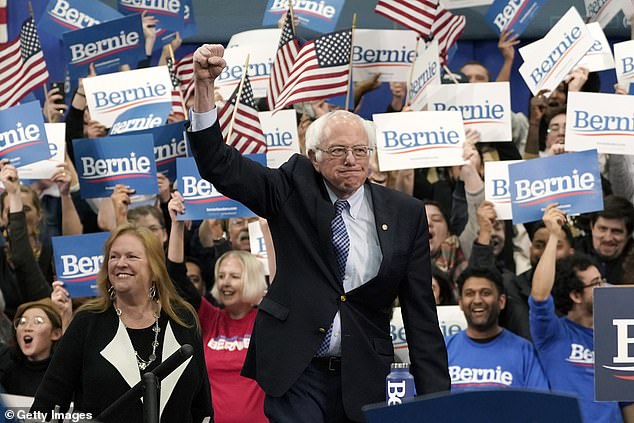 Meanwhile, Sen. Bernie Sanders is now in the lead in Texas, acording to a new poll from the University of Texas and the Texas-Tribune

Sunshine state voters like the three leaders in New Hampshire about evenly.

Eleven per cent like former South Bend Pete Buttigieg, who won the delegate percentage in Iowa and came in second in the New Hampshire primary.

Buttigieg is followed by Sanders, who gets just 10 per cent support, despite slowly emerging as a national frontrunner.

She had a good night Tuesday, finishing third place in New Hampshire after a disapppointing fifth place close in the Iowa caucuses.

Bloomberg’s edge comes from having about a 10-point lead over Biden among white survey respondents. The former mayor gets the support of 28 per cent of white Floridians,  versus the 18.5 per cent who selected Biden as their first choice for Democratic nominee.

White Floridians made up 48.4 per cent of the poll.

Biden comes in that close second thanks to black voters, as he wins the support of 41.5 per cent of that bloc.

But Bloomberg does better than every other candidate – with 22.7 per cent of black voters selecting the former mayor as their candidate of choice.

The poll was conducted Wednesday and Thursday of this week as Bloomberg was taking heat for a recording that had been shared online of him talking bluntly about his stop-and-frisk policies.

‘Ninety-five percent of your murders – murderers and murder victims – fit one M.O. You can just take the description, Xerox it and pass it out to all the cops,’ Bloomberg is heard saying in the recording. ‘They are male minorities, 16 to 25. That’s true in New York. That’s true in virtually every city.’

‘And that’s where the real crime is. You’ve got to get the guns out of the hands of the people that are getting killed.’

President Trump reacted to the story in all caps: ‘WOW, BLOOMBERG IS A TOTAL RACIST!’ the president tweeted, as he tries to woo black voters to the Republican side.

On Thursday, the former mayor apologized for endorsing the stop-and-frisk policy.

‘There is one aspect of approach that I deeply regret, the abuse of police practice called stop and frisk,’ Bloomberg said. ‘I defended it, looking back, for too long because I didn’t understand then the unintended pain it was causing to young black and brown families and their kids.’

‘I should have acted sooner and faster to stop it,’ he continued. ‘I didn’t, and for that, I apologize.’

Beyond Biden and Bloomberg, no other Democrat gets double-digit support among Florida’s black voters.  Sanders comes in third place getting 9.8 per cent, Buttigieg earns 4.6 per cent, Warren gets 4.3 per cent and Klobuchar has 3.8 per cent. 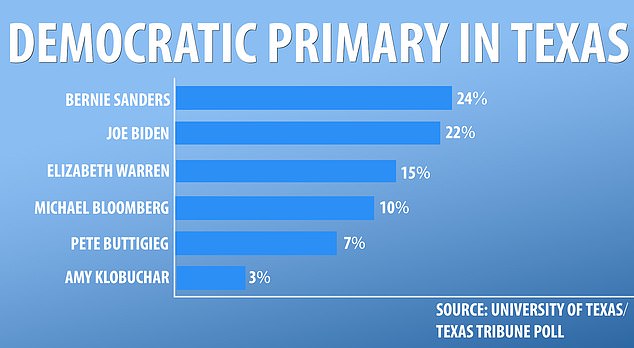 In a University of Texas/Texas Tribune poll released Friday, Sanders leads Biden 24 per cent to 22 per cent among Democratic primary voters in the Lone Star State.

Sanders’ lead is within the 4 point margin of error for the Democratic part of the survey.

Sanders has doubled his support in the state since the last University of Texas/Texas Tribune poll was conducted, back in early November.

Then, Sanders was the choice of just 12 per cent of Texas Democrats – and was in fourth place behind Biden, Warren and former Texas Rep. Beto O’Rourke, who was still running for president at the time.

Now Sanders has leapfrogged not only Biden but Warren who currently has the support of 15 per cent of Texas Democrats.

She’s followed by Bloomberg with 10 per cent.

Bloomberg didn’t enter the 2020 race until late November, after the last Texas Tribune survey was conducted.

Buttigieg gets 7 per cent and Klobuchar gets 3 per cent in the new Texas poll.

While a slight majority of all Texas voters – 52 per cent – said they would like to see the president not win re-election, none of the Democrats beat him in the state – though some of the losses are close to the 2.83 per cent margin of error for the full survey.

Sanders performs best in the state against Trump, but it’s close.

Biden then loses to Trump by 4 points and Bloomberg loses to the current president by 5 points, the survey shows.