Blue dinosaur eggs could change what we know about birds

It was assumed that early birds and the dinosaurs they evolved from, produced simple white eggs.

But researchers have found that a feathered dinosaur laid blue-green eggs instead.

It’s believed that the dinosaur laid colored eggs to help camouflage its eggs in open, dug-out ground nests, as darker eggs are less visible to predators than white ones.

The research suggests that dinosaurs evolved colored eggs before birds evolved, and some species of birds that lay blue eggs, such as emus and robins, inherited this trait from their dinosaur ancestors.

Researchers at Yale University and the University of Bonn discovered pigments that give rise to a blue color in the egg shells of a feathered dinosaur, Heyuannia huangi

The finding is one example of a dinosaur trait that was though to be unique to birds, for example have feathers and wishbones.

This is the first time that the color of dinosaur eggs has been examined in detail, despite numerous pieces of research about the hue of the ancient beasts’ feathers and scales.

Mark Hauber of Hunter College in New York, previously found that colorful bird eggs are the result of the way two pigments – biliverdin and protoporphyrin – blend with each other along with calcium carbonate in the shell. 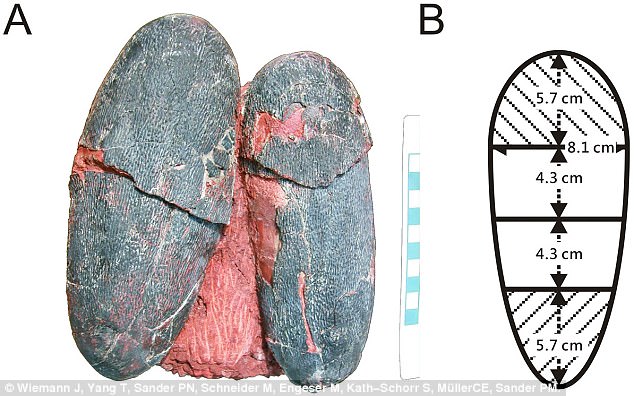 Researchers have found that some dinosaurs laid blue eggs. They examined 66 million-year-old eggs (one example pictured left) laid by oviraptor dinosaurs called Heyuannia huangi to find that they contain the same pigments as the colorful eggs produced by some modern birds

Now, researchers based at Yale University and the University of Bonn found the same two pigments in the eggs of Heyuannia huangi.

‘Once the idea that colored eggs evolved in birds and were a trait of modern birds had been suggested, no one thought about it again or dared to ask if dinosaur eggs had been colored,’ said Jasmina Wiemann, a researcher at Yale University and the co-author of the study, told National Geographic.

‘I was originally taught that all the weird colors you can get in fossils, like the blueish-green hue, may be due to mineral precipitation.

The feathered dinosaur was first described in 2003 and is thought to have had an elaborate plume around its head, degenerate wings on small arms and fanned tail. 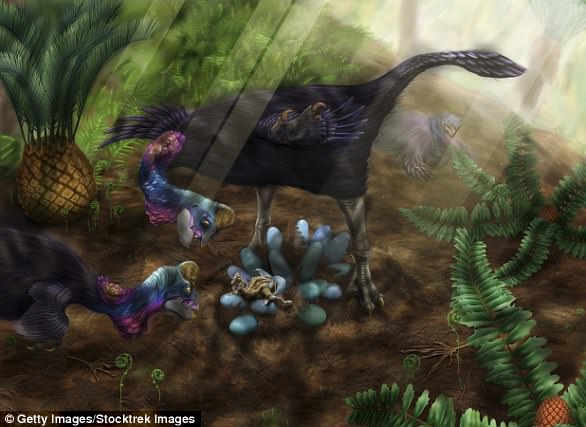 It was a medium-sized oviraptor at around five feet (1.5 metres) long, weighing 23 lbs (10.5kg) and was the first to be found in China.

The creature had no teeth, making its diet a mystery.

This species is a close relative of modern birds and laid and is thought to have watched over its eggs in open nests in a similar way, based on the discovery of preserved clutches of eggs and shell measurements.

It’s now thought that its eggs were a blue, green color, perhaps so they were easily hidden in nests.

‘We screened through lots of eggshells, and one day had a positive result for these oviraptor eggs.

‘It was a huge surprise.

Now, it’s been shown that colored eggs date to as far back as the Late Cretaceous period, which spanned from 100 to 66 million years ago.

It is believed that these feathered dinosaurs laid colored eggs to help camouflage their eggs in open, dug-out ground nests.

The researchers suggest this would have lent the reptiles an advantage because darker eggs are less visible to predators when left in a nest than white ones. 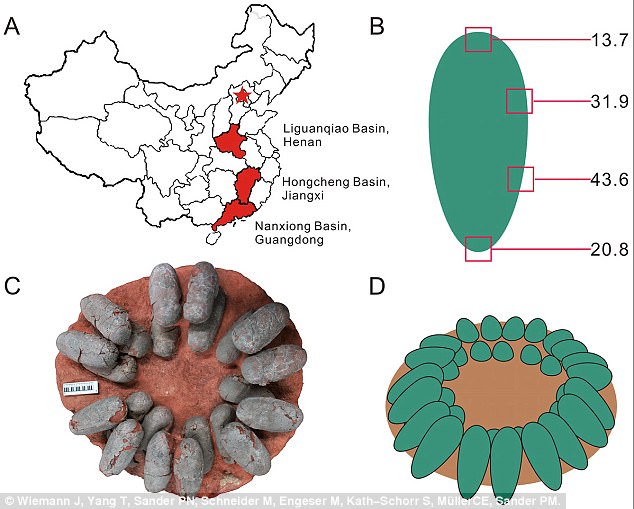 (A) Map of China. Red shaded provinces indicate the localities where the specimens were collected. (B) The reconstructed color if the Heyuannia huangi egg (C) Top view of an oviraptor clutch. This clutch illustrates how eggs are arranged in pairs with their blunt ends pointing to the clutch center. The eggs are arranged in layers separated by sediment. (D) Reconstruction of a partially open oviraptorid nest

This would have helped to protect the eggs if a parent had to leave them unattended to find food.

The coloration may also have allowed parents to recognize their eggs and eject others left by different species for them to raise.

‘Egg camouflage represents a major character of open-nesting birds which accomplish protection of their unhatched offspring against visually oriented predators by cryptic egg coloration,’ the authors of the research paper wrote.

The feathered dinosaur was the first oviraptor to be found in China and is thought to have had an elaborate plume around its head, degenerate wings on small arms and fanned tail. 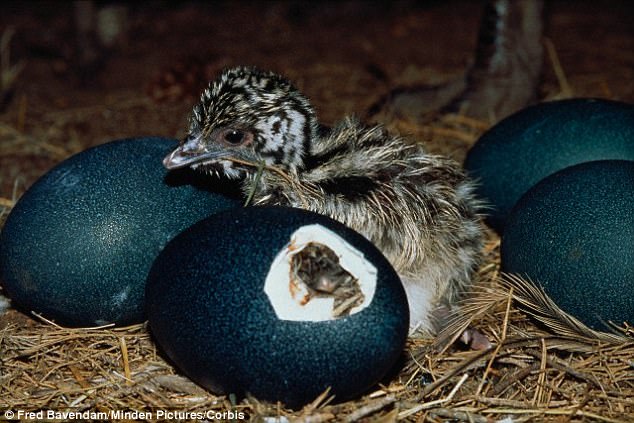 Some of the oldest species of birds, such as emus, lay colored eggs (pictured), with a previous study pinpointing the chemical origin of the dark turquoise color. Now, it’s been shown that colored eggs date to as far back as the Late Cretaceous period 100 to 66 million years ago

‘Many birds are open-nesting, but protect their eggs by continuous brooding, and thus exhibit no or minimal eggshell pigmentation.,’ the researchers wrote in their study.

‘Their closest extant relatives, crocodiles, protect their eggs by burial and have unpigmented eggs.’

However, the researchers traced the origin of colored eggs to birds’ dinosaur ancestors by providing the first record of the avian eggshell pigments, protoporphyrin and biliverdin, in the eggshells of Late Cretaceous oviraptorid dinosaurs. 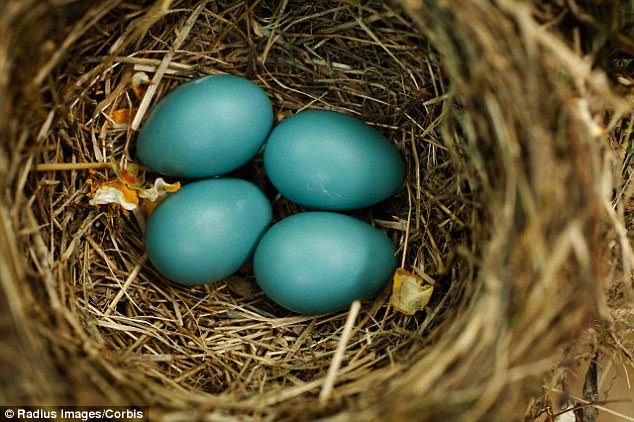 Colored eggs date to as far back as the Late Cretaceous period, which spanned from 100 to 66 million years ago. It is believed that these feathered dinosaurs laid colored eggs to help camouflage their eggs in open, dug-out ground nests. Pictured are blue robin eggs