A former foreign policy adviser to Margaret Thatcher has said that the return of blue British passports was an act of ‘nostalgia’ driven by ageing Brexit voters.

Charles Powell said it had been Mrs Thatcher’s Conservative government which phased out the old passport and brought in the EU-style burgundy version in the 1980s.

The new blue passports will start to be issued a few months after the UK leaves the European Union in March 2019.

Mr Powell told the Daily Express that the move to restore blue passports was ‘part of the nostalgia on which the predominantly elderly Brexit constituency thrives’.

He said: ‘So long as they are content with symbols, rather than substance, I see no harm in letting tham have their way.

‘If we get their agreement to full alignment with the single market in return, it’s a good deal.’

Mr Powell was a foreign policy aide to Mrs Thatcher from 1983 until she left Downing Street in 1990. 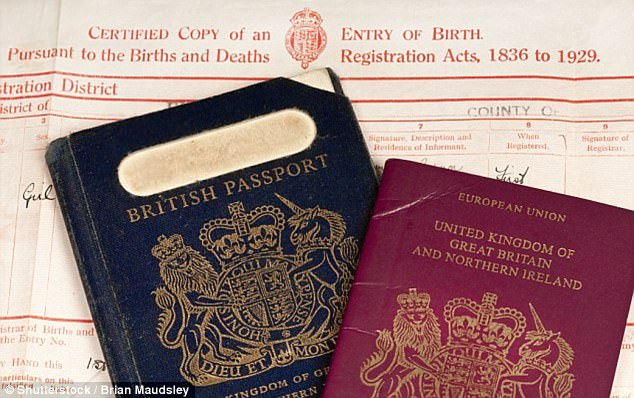 The new blue passports will be phased in from October 2019, when the current supplier’s contract expires and soon after the UK leaves the European Union

Theresa May said the new passport would be an expression of the UK’s renewed ‘sovereignty and independence’ as it leaves the EU, as the switch was announced last week.

The current passport supplier has a contract until October 2019.

British passports were due for a redesign regardless of the colour change, as a routine update for the travel document in order to improve its security features.

The colour changed in 1988 when Mrs Thatcher was Prime Minister. There is no specific EU law requiring member states to have a burgundy passport.