Police have issued a warning over the ‘Blue Whale Challenge’ that encourages teenagers to take part in 50 tasks over 50 days that culminate in suicide.

The challenge allegedly originated in Russia in 2016 and is linked to numerous deaths around the world.

‘Blue whale challenge’ tasks can range from watching horror movies to waking at strange hours, and eventually progress to self harming.

On the 50th day, the controlling manipulators behind the ‘game’ reportedly instruct the youngsters to kill themselves. The game is heavily linked with the name Jonathan Galindo, a man that may also be seen with his face painted like Mickey Mouse or a dog.

Northants Police today issued a warning on social media about the game and told parents to be mindful of what children are accessing online.

The game is heavily linked with the name Jonathan Galindo, a man that may also be seen with his face painted like Mickey Mouse or a dog

The force said: ‘We are aware of a disturbing social media challenge circulating called the ‘Blue Whale Challenge’ which encourages teenagers to take part in a series of 50 challenges that culminate in committing suicide.

‘This challenge first appeared in 2016 and tasks are given online or through text messages, instant messages or posts on Instagram and Twitter.

‘Please talk to your children about the dangers and tell them not to open any messages or challenges of this kind.’

In a lengthy Facebook post today, Northants Police recommend parents look out for  children receiving messages or posts relating to Jonathan Galindo, a man that may also be seen with his face painted like Mickey Mouse or a dog.

And also receiving or making references to #f57, #f40 or #IMawhale.

The warning comes just days after an 11-year-old British schoolboy was blackmailed into cutting his own wrists by an anonymous Instagram user after an apparent resurgence of the sinister game. 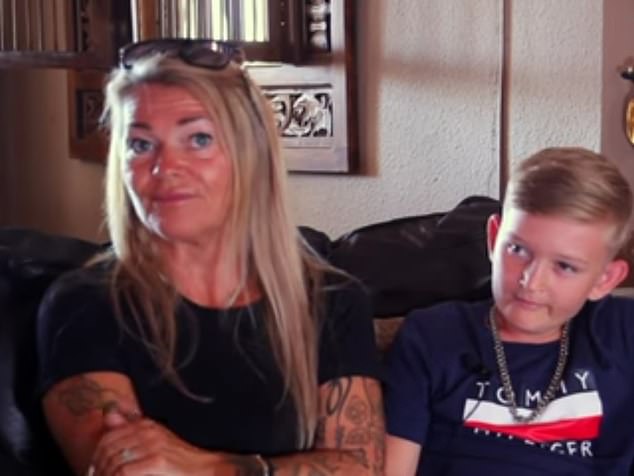 Rocky Gyoury, (right) who lives on Spain’s Costa Blanca, used a needle to make three gashes in his right arm last Thursday after the account threatened to kill his mother Victoria Mcleish, 45, (left) if he did not comply

Rocky Gyoury, who lives on Spain’s Costa Blanca, used a needle to make three gashes in his right arm last Thursday after the account threatened to kill his mother Victoria Mcleish, 45, if he did not comply.

The user – who went only by Johnothan – revealed details of Rocky’s age, school, address, mother’s name, model of phone and data such as his IP address before asking him to ‘play a game’.

Rocky told MailOnline: ‘I made three cuts and sent a picture, but he said it wasn’t deep enough and if I didn’t do it again he would hurt my mum. So I went deeper.’

His next challenge was to carve a ‘blue whale’ on his arm – which he refused to do.

Ms Mcleish, 45, found the scars on his arm later that day. Northern Ireland police last week issued a fresh warning about the dangers of the so-called ‘blue whale challenge’.

Scotland-born Ms Mcleish said she is spending the next 50 days raising awareness about the challenge’s dangers.

She said: ‘I would never, ever have thought my son would participate in something like this, but that’s the influence these sick people have over our children.

‘I didn’t know the internet was such a dangerous place to be. I was tucked up next door thinking my son was alright, but he wasn’t.’

Despite reports of the game in countries including Ukraine, Russia, United States, Spain and the UK, there is still considerable scepticism in its existence, or tangible proof young people are being led to suicide by an online game.

The challenge is thought to have originated in Russia, however when academics looked at the message boards linked to the deadly game, they found most of the memes and posts were posted by children.

Alexandra Arkhipova, a professor in Folklore Studies at the Russian State University for the Humanities told the BBC all the ‘curators’ turned out to be ’12 to 14 years old’.

Any people they did find playing the game were copycats who had only acted out parts of the game already reported by the media.

Arkhipova added: ‘In all these groups people, mainly young people, were waiting for this game. This game never starts.’