One of the voice actors from popular Australian television show ‘Bluey’ has shared the parenting advice fans can’t get enough of.

The wholesome cartoon about six-year-old blue heeler pup Bluey and her family touches on a diverse range of topics, from deafness to infertility and even ADHD.

Actress Melanie Zanetti, who plays the voice of Bluey’s mum Chilli, says the show is educational for both children and parents alike.

‘I have heard parents say that there is an episode where Chilli is just like ‘I need 20 minutes’,’ she told 7Life.

‘Parents tell me that this episode has really helped their conversations with their children.’

Actress Melanie Zanetti (pictured) plays the ‘mum’ from hit Australian children’s show ‘Bluey’. The wholesome cartoon about six-year-old blue heeler pup Bluey and her family touches on a diverse range of topics, from deafness to infertility and even ADHD 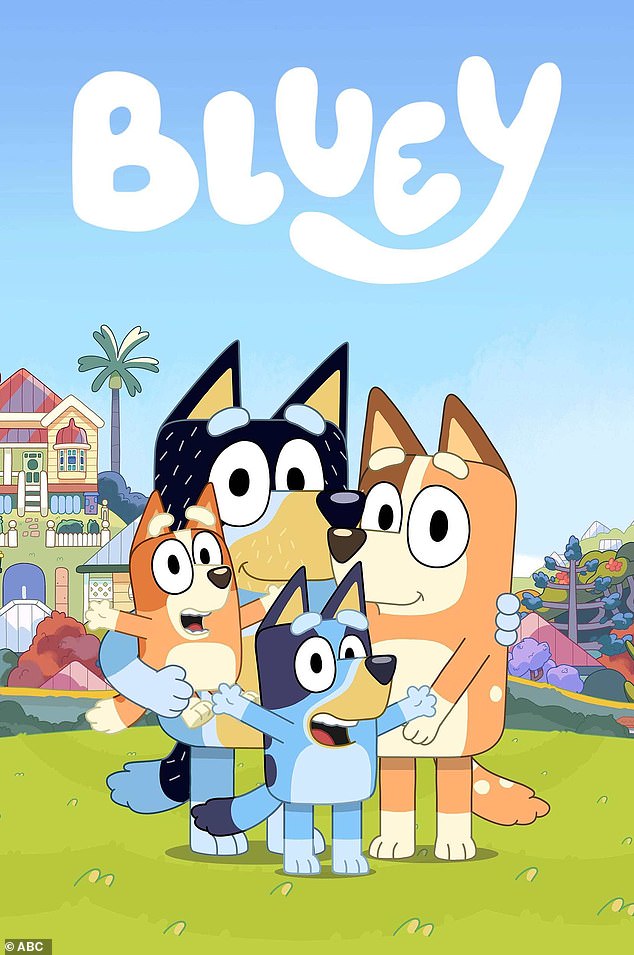 Now Ms Zanetti revealed the parenting advice fans have learnt from the show. ‘I have heard parents say that there is an episode where Chilli is just like ‘I need 20 minutes’,’ she told 7Life

In one episode Bluey’s dad Bandit explained the concept of the ‘tactical wee’ – when parents encourage kids to visit the bathroom before leaving the house.

‘The advice changed their lives. Brilliant, I love it,’ Ms Zanetti said.

The show also touches on infertility through Chilli’s sister Brandy who is unable to have kids herself.

Since the show began in 2018 Bluey gained a worldwide following, and in 2020 when Series 2 aired it attracted an overnight metropolitan audience of more than one million viewers.

The show also initially created confusion as it characters appeared somewhat similar to those in other popular animated shows Family Guy and Peppa Pig.

‘Not many people knew what to think of it,’ Daley Pearson, Bluey’s executive producer, told BBC in 2019.

‘People were not sure if it fell in sort of prime time comedy, you know, Family Guy or if it fell somewhere towards Peppa Pig.’

It comes after Ms Zanetti and her co-worker David McCormack, who voices the character Bandit, met for the first time in person only last month.

The two actors are one of the world’s most successful on-screen couples and appeared comfortable when sat side-by-side in an interview with Jimmy Fallon.

But it turns out they only just met that day. 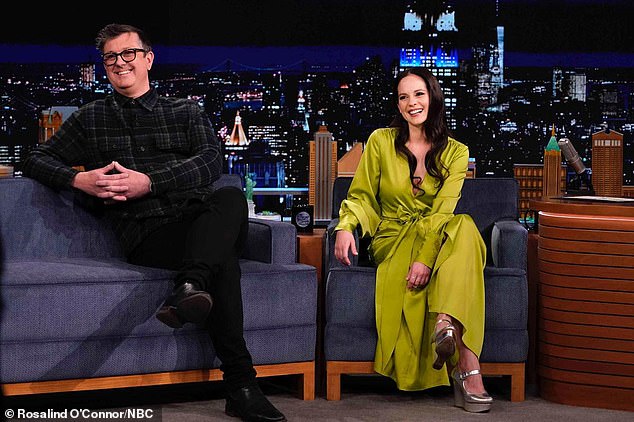 It comes after Ms Zanetti (right) and her co-worker David McCormack (left), who voices the character Bandit, met for the first time in person only last month 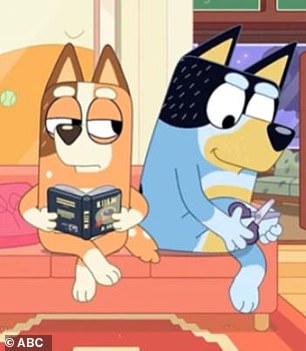 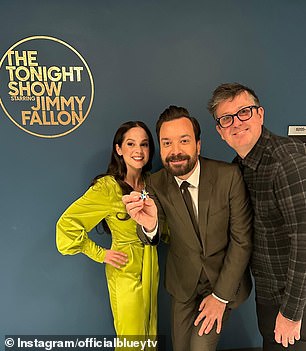 Chilli, left, and Bandit, right in left, are one of Australia’s most popular on-screen couples, Jimmy Fallon was excited to meet them and claimed Bluey is his favourite show

‘(We met) two days ago, for the first time,’ Zanetti told the host, smiling.

‘We record separately, we live in different cities and I travel a lot for work,’ she explained.

This was something which appeared to shock the host, as they have both been core members of the popular children’s show’s cast since 2018.

McCormack agreed the arrangement was not what he had expected when he signed up for the show.

‘I thought it would be all of us sitting around a table, you know, like in the movies,’ he said.

‘But we’re just isolated in our booths,’ he added.

McCormack lives in Sydney, while Zanetti travels between Brisbane and Los Angeles for work, this added with state lockdowns meant they never had a chance to get together.

The stars also spoke about how they managed to score the parts of Bluey’s parents.

McCormack said he was in a lift one day when someone asked him to take part. He pushed back and said he couldn’t act but then finally agreed to have a go.