The bodies of Vietnamese migrants who died when human traffickers locked them in a refrigerated lorry have been repatriated to their home country today and taken to their families.

The 39 men, women and children were discovered frozen after being trapped in the metal container which was found in Essex in October.

The bodies of 16 victims, some of whom who were as young as 15, arrived on a flight in Hanoi, Vietnam’s capital, where a fleet of waiting ambulances transported them to their home provinces south of Hanoi.

There were harrowing scenes as loved ones sobbed while carrying the coffins of their relatives through the Southeast Asian country today.

Officials move coffins containing the bodies of 16 of the 39 victims found dead in a refrigerated lorry in Essex, at the Noi Bai International Airport in Hanoi, Vietnam 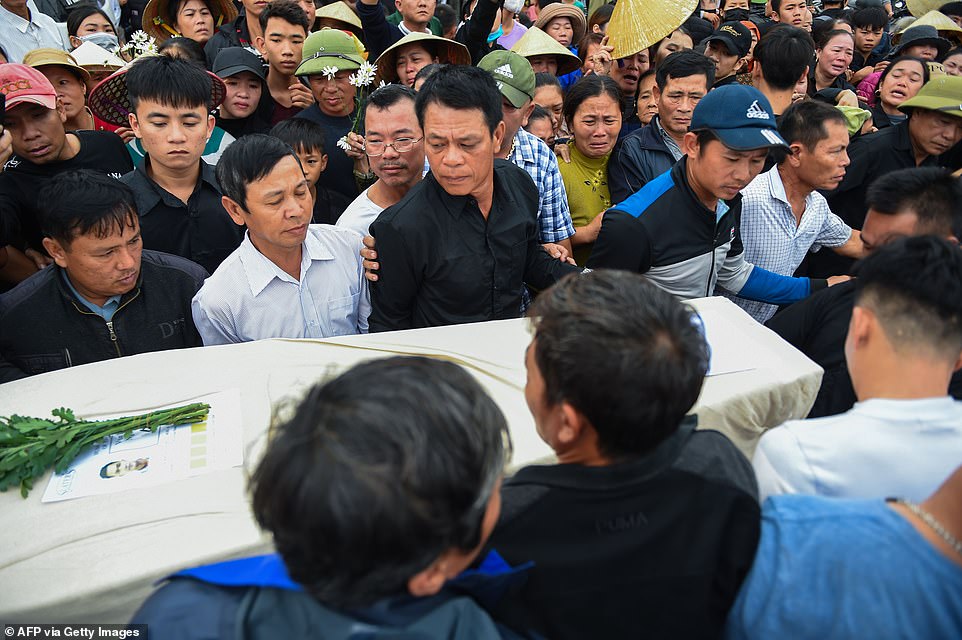 Relatives carry the casket bearing the body of Nguyen Van Hung as it arrives in Dien Chau district, Nghe An province 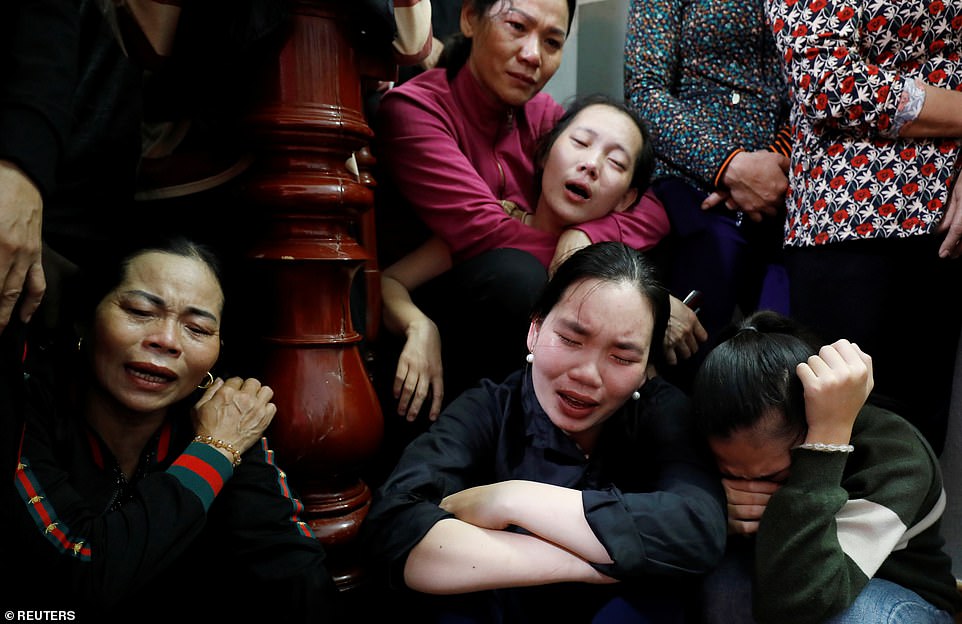 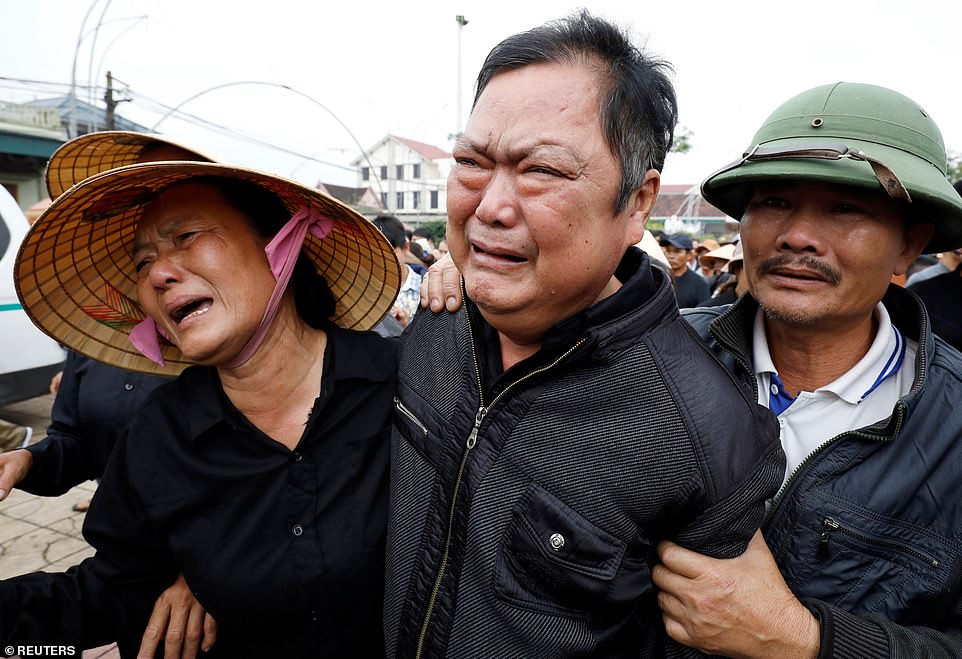 Nguyen Dinh Gia, whose son Nguyen Dinh Luong was among those found dead, told Reuters: ‘After waiting for so many days, my son has finally arrived. We are deeply saddened, but we have to hold back the emotion to organise the funeral for my son.’ 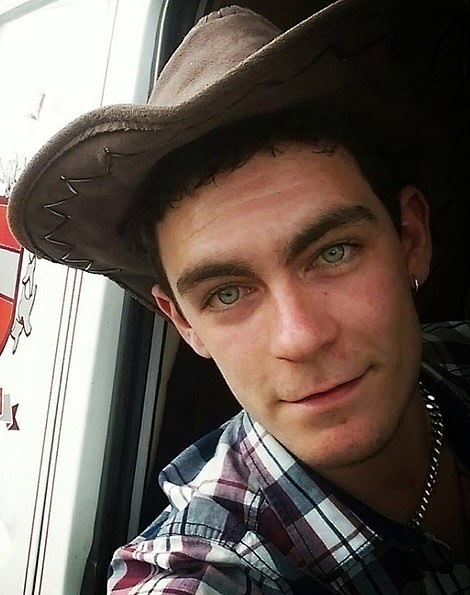 Maurice Robinson, 25, who is accused over the deaths of 39 migrants, has pleaded guilty at the Old Bailey to plotting to assist illegal immigration

He was speaking from Ha Tinh province, where another 10 victims were from.

The container had been loaded onto a ferry in Zeebrugge in Belgium in a people smuggling operation, before the horrifying discovery at an Essex port last month.

Vietnamese woman Pham Thi Tra My sent her mother a series of harrowing messages telling her she ‘loved her’ and was ‘dying because she couldn’t breathe.’

Her family claim the 26-year-old paid people smugglers £30,000 to travel to the UK via China ‘in search of a better life.’

The bodies were found on October 23 in the town of Grays, Essex. Police say the victims were aged between 15 and 44.

The 31 men and eight women are believed to have paid human traffickers for their clandestine transit into England. Several suspects have been arrested in the UK and Vietnam.

Hoang Lanh, father of 18-year-old victim Hoang Van Tiep, was informed by a local government official that his son’s remains would be brought home today, along with those of six other victims from Dien Chau district in Nghe An province, including Tiep’s cousin Nguyen Van Hung. 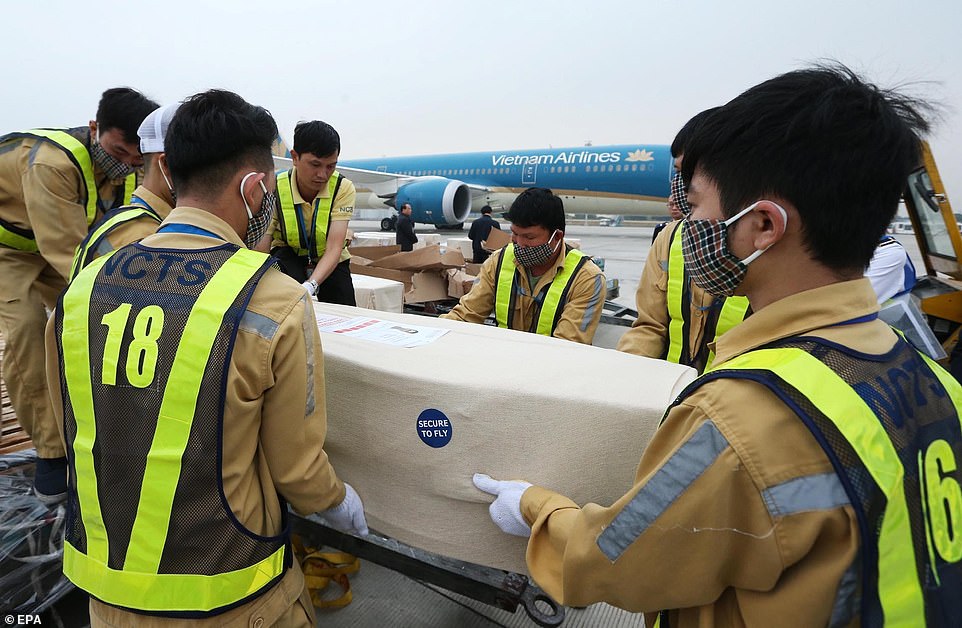 Officials had the difficult task of repatriating the bodies at the Noi Bai International Airport in Hanoi, Vietnam 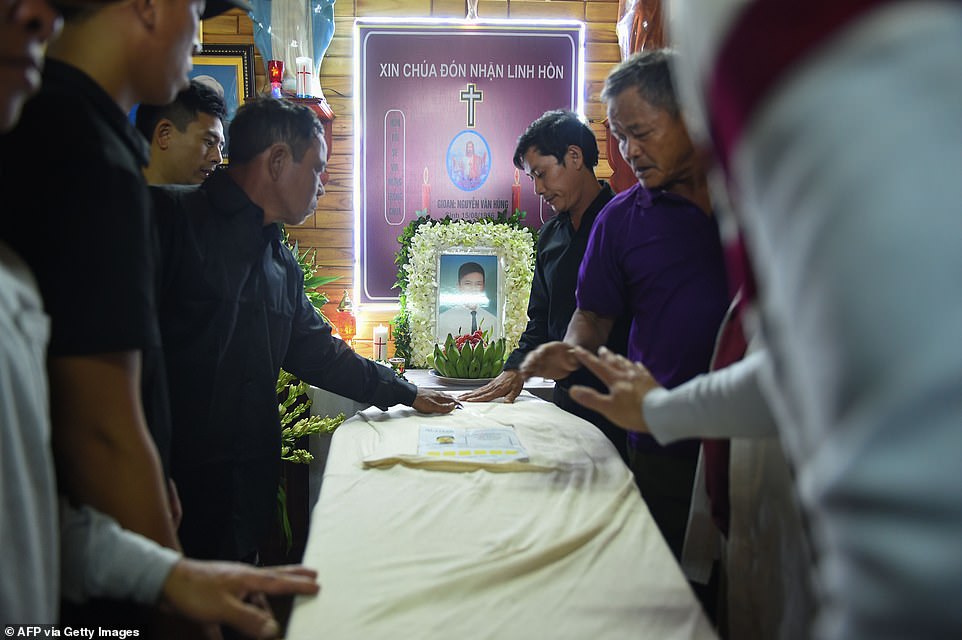 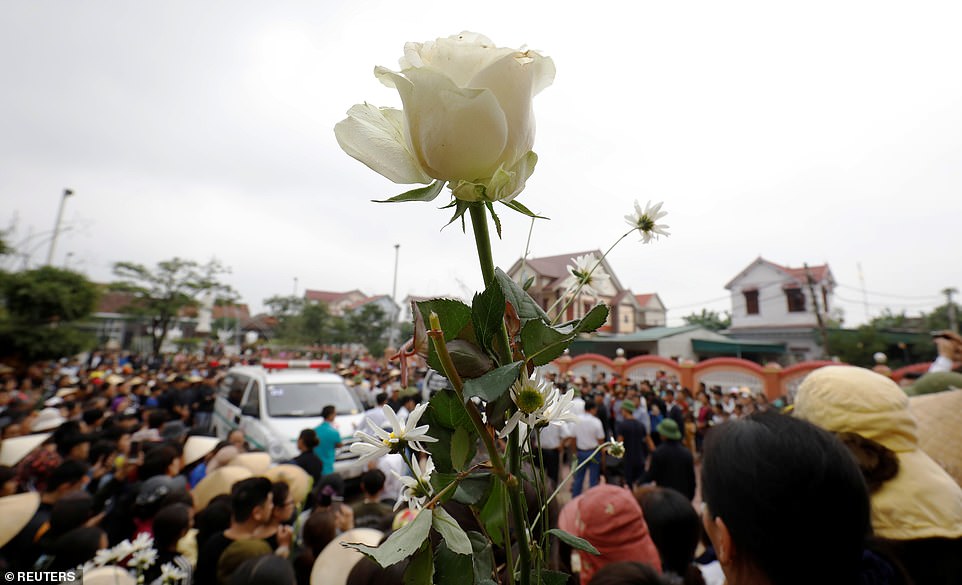 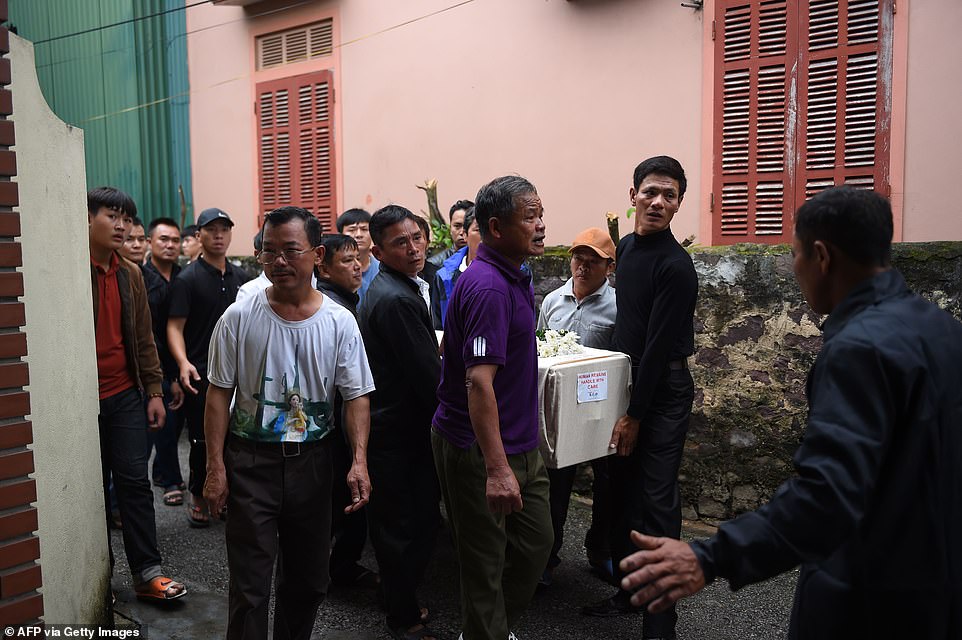 Some 39 men, women and children died as temperatures plunged to freezing in the refrigerated lorry container 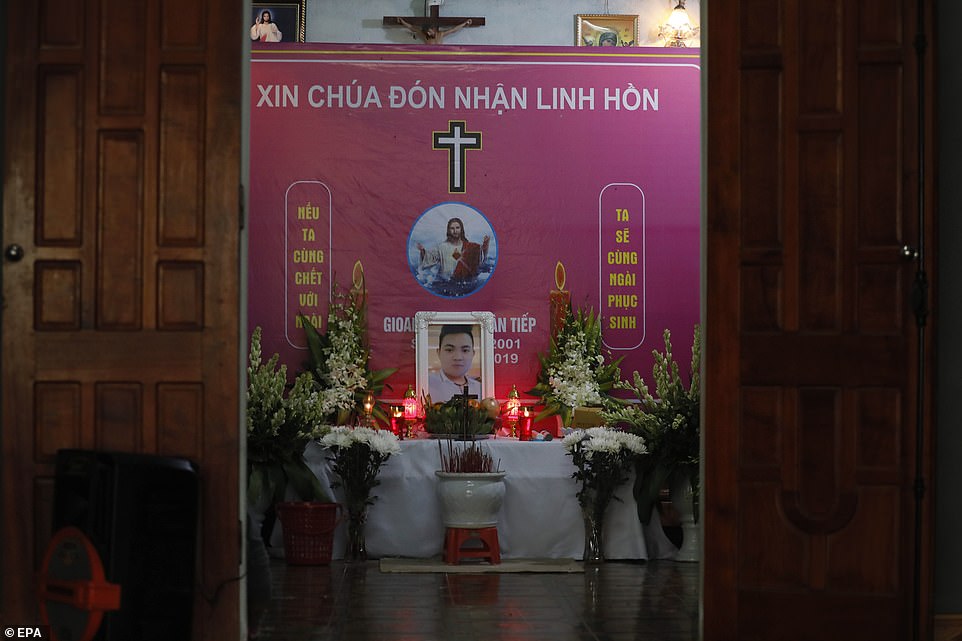 A portrait of 18-year-old Hoang Van Tiep who is understood to have left home two years ago after his family got a £13,500 loan to pay for him to travel to Russia and on to France. He had left his family in Yen Thanh to risk his life getting into the UK 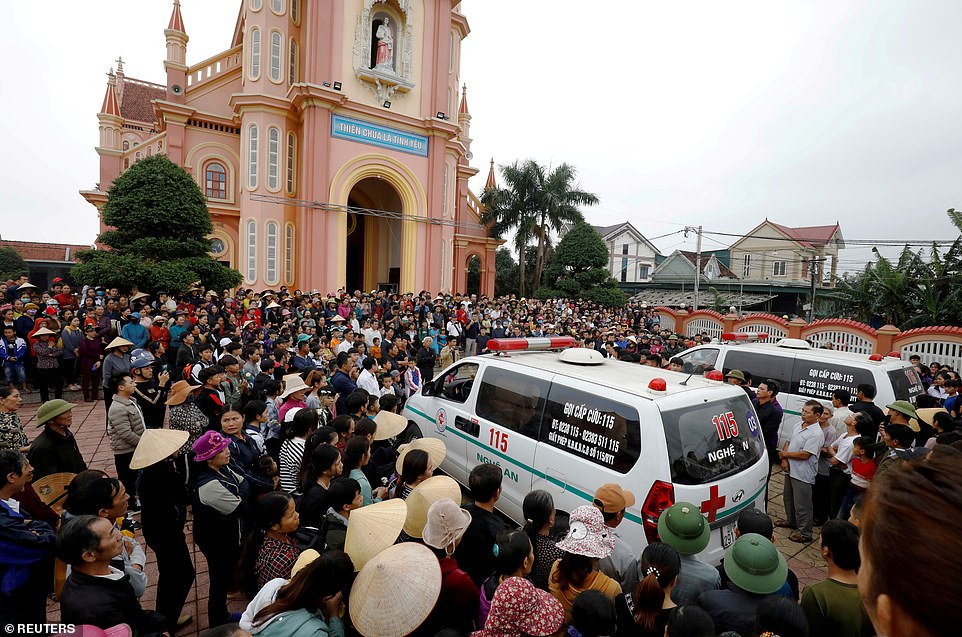 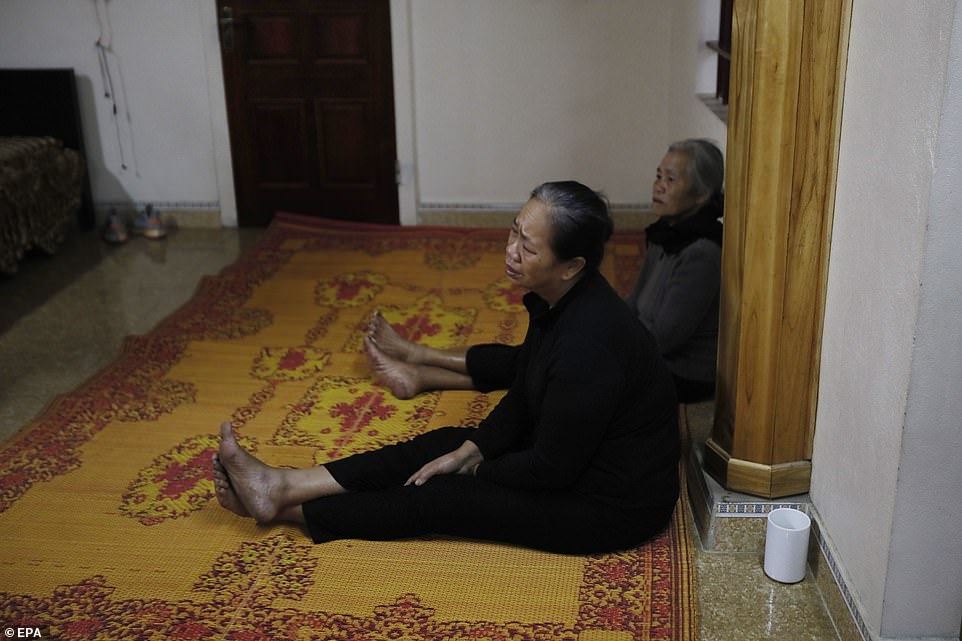 Pham Thi Lan (in the foreground), is the mother of 33-year-old Nguyen Van Hung 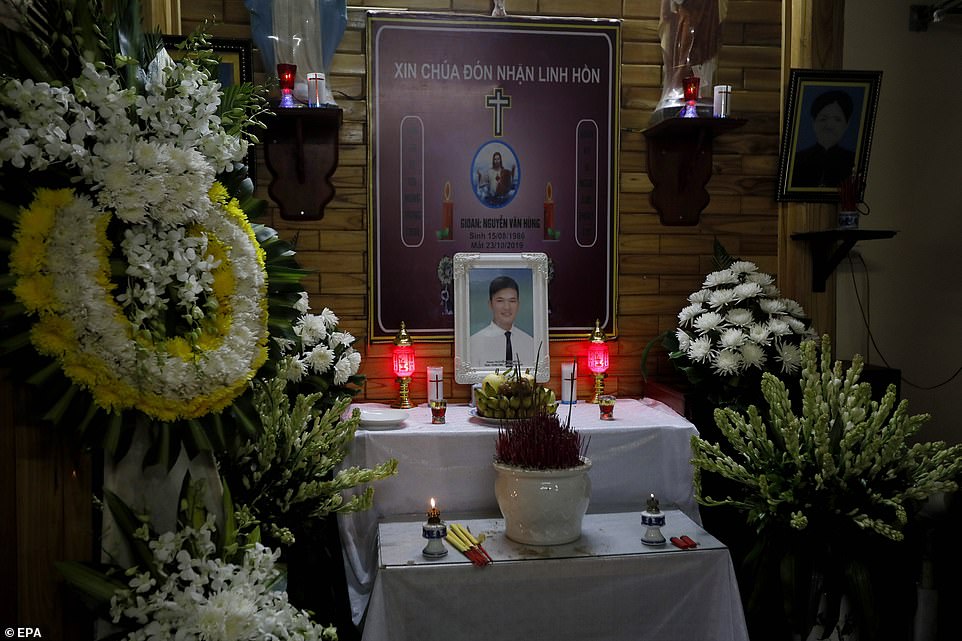 Nguyen Van Hung, 33, last messaged his parents on October 21, telling them he was ‘going by taxi’ to the UK 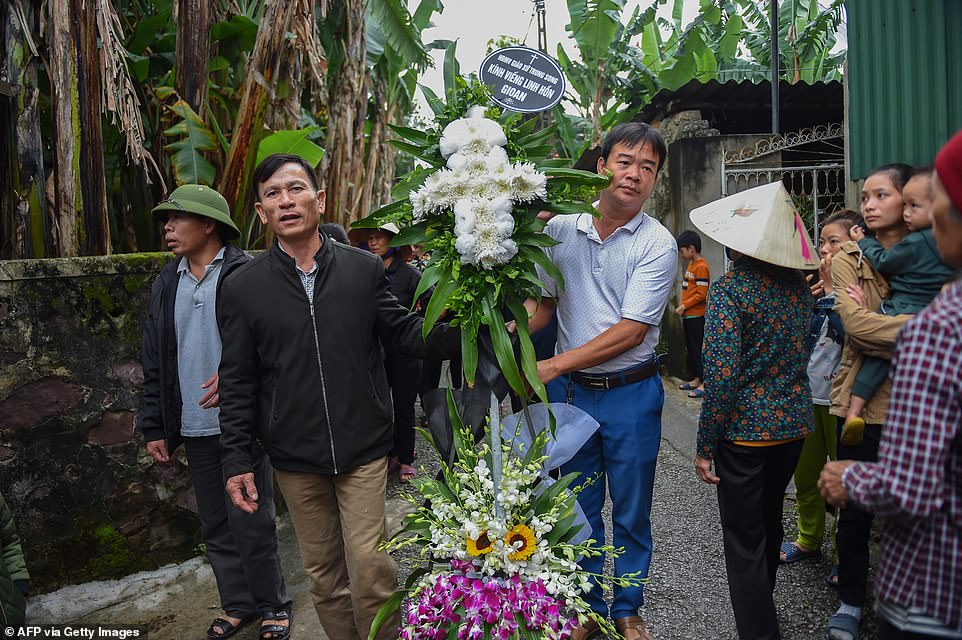 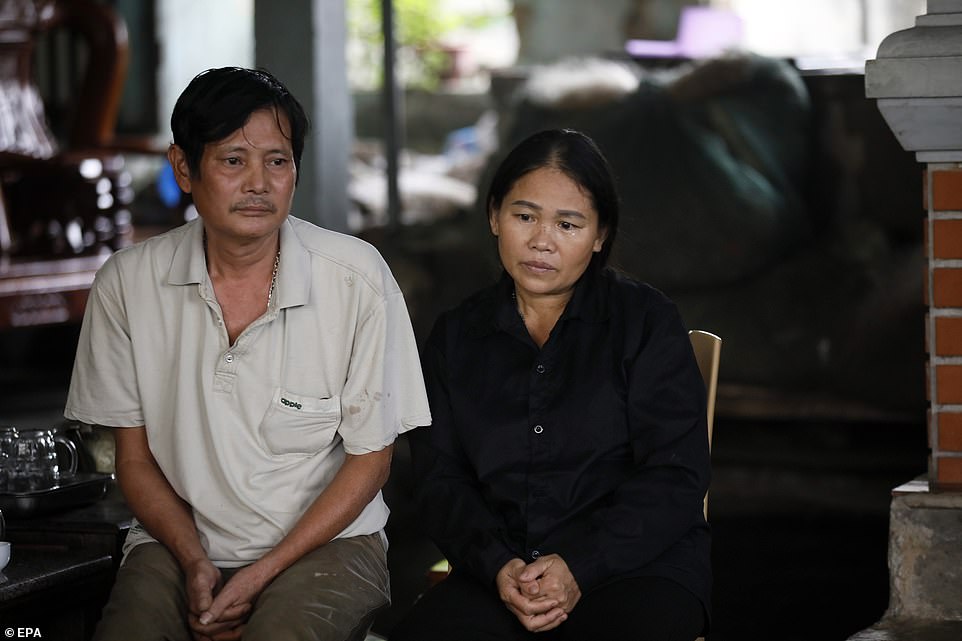 ‘It’s bittersweet, I can’t believe I would have to welcome my son back like this,’ Lanh said. ‘I’m devastated but I am happy to have him back with us soon.’

Another victim’s family expressed their sadness ahead of receiving the bodies of their loved one.

‘I have been sad for a month and I can’t eat anything,’ said Nguyen Thanh Le, father of 33-year-old Nguyen Van Hung. ‘My son died far away from his home and I had to wait for a long time, but today his body is coming back and tomorrow is the funeral.’

Legal proceedings in the case are continuing in England.

On Monday in London, a lorry driver accused over the deaths of 39 migrants pleaded guilty to plotting to assist illegal immigration.

Maurice Robinson, 25, who was allegedly part of a global smuggling ring, is also charged with the manslaughter of a group of men, women and children found dead in a refrigerated trailer.

He was arrested shortly after the bodies of eight females and 31 males were discovered in the container attached to his Scania cab in an industrial park in Grays, Essex, early on October 23.

Robinson, who is known as Mo, appeared at the Old Bailey via video link from Belmarsh prison for a plea hearing. He faces 39 counts of manslaughter, a count of conspiracy to traffic people, and one charge of concealing criminal property.

He admitted acquiring criminal property and conspiracy to assist unlawful immigration, but entered no pleas to the other counts. He will appear in court again next month.

On Monday British police said they had arrested a 36-year-old man on suspicion of manslaughter, conspiracy to traffic people and conspiracy to assist unlawful immigration. Two other men have been arrested in Britain and Ireland in connection with the case. 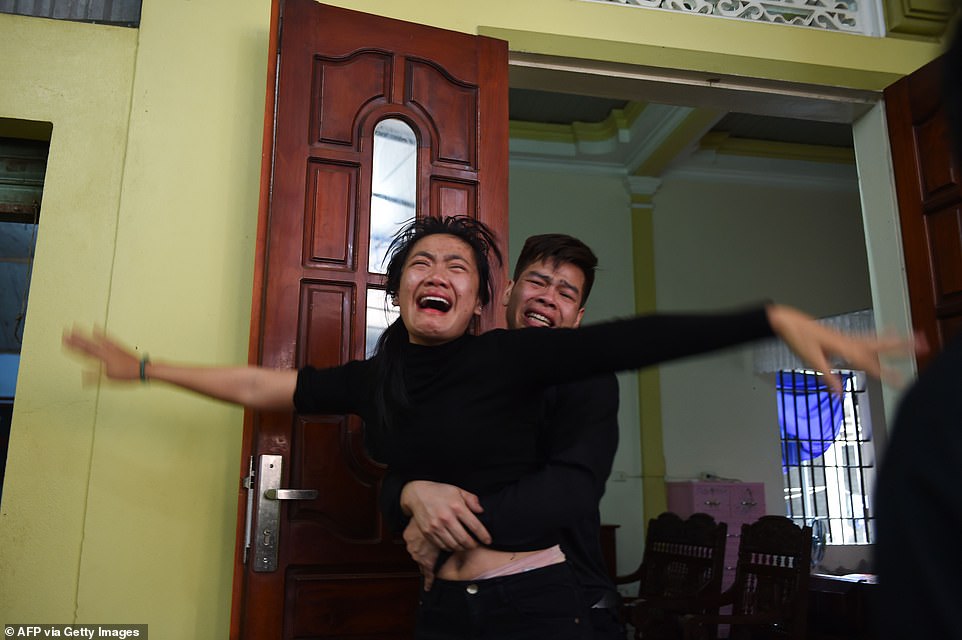 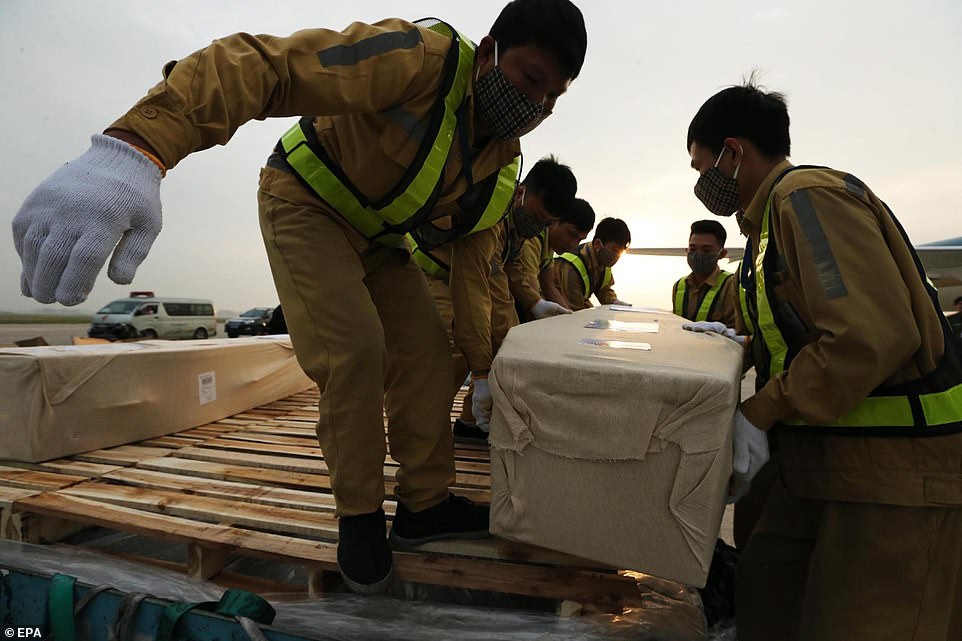 Some 16 of the 39 victims were returned to their homes in Vietnam today, to be properly laid to rest 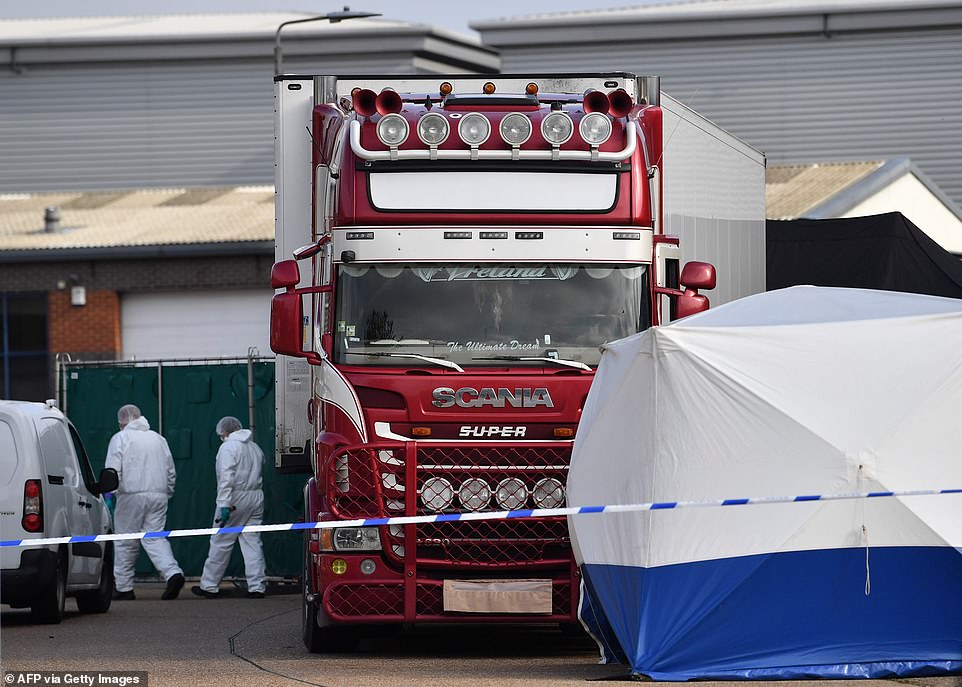 The bodies of eight females and 31 males were discovered in the trailer attached to his Scania cab in an industrial park in Grays, Essex, early on October 23 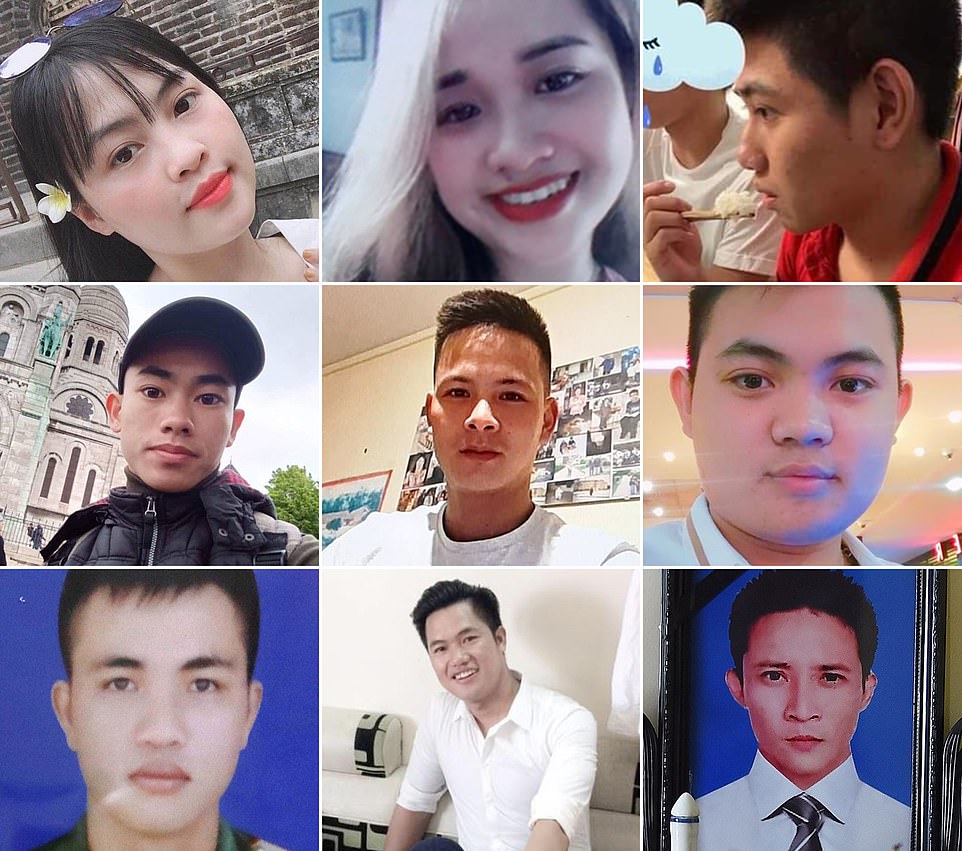 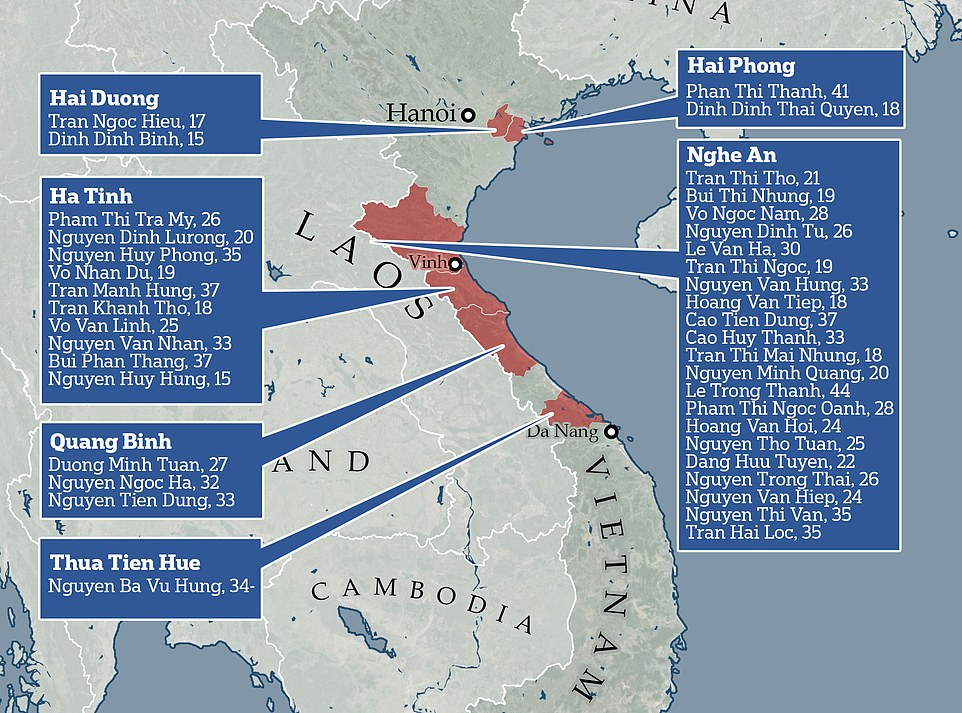 The group were were from five provinces in the central, coastal area of Vietnam and two provinces near Hanoi

Who were the 39 people who died in the Esssex lorry container?

These are the names of the victims of the Essex truck tragedy are:

Pham Thi Tra My, a 26-year-old woman from Ha Tinh

Tran Khanh Tho, a 18-year-old man from Ha Tinh

Tran Thi Tho, a 21-year-old woman from Nghe An

Bui Thi Nhung, a 19-year-old woman from Nghe An

Nguyen Dinh Tu, a 26-year-old man from Nghe An

Tran Thi Ngoc, a 19-year-old woman from Nghe An

Nguyen Van Hung, a 33-year-old man from Nghe An

Hoang Van Tiep, a 18-year-old man from Nghe An

Cao Tien Dung, a 37-year-old man from Nghe An

Cao Huy Thanh, a 33-year-old man from Nghe An

Tran Thi Mai Nhung, a 18-year-old woman from Nghe An

Nguyen Minh Quang, a 20-year-old man from Nghe An

Pham Thi Ngoc Oanh, a 28-year-old woman from Nghe An

Hoang Van Hoi, a 24-year-old man from Nghe An

Nguyen Tho Tuan, a 25-year-old man from Nghe An

Dang Huu Tuyen, a 22-year-old man from Nghe An

Nguyen Trong Thai, a 26-year-old man from Nghe An

Nguyen Van Hiep, a 24-year-old man from Nghe An

Nguyen Thi Van, a 35-year-old woman from Nghe An

Tran Hai Loc, a 35-year-old man from Nghe An