By Tom Sargeant and Kevin Airs For Daily Mail Australia

A fatal house fire which killed a 14-year-old boy could be linked to a street fight earlier in the evening, police claim.

A mother and her five children managed to escape the inferno as it ripped through the Montana Way home in Macquarie Fields in Sydney’s south-west.

But the body of the teenager was reportedly found under a bed in the burnt out shell of his bedroom at the rear of the house.

Now detectives are investigating if there is any connection between the earlier brawl and the deadly blaze which erupted at 1.35am on Wednesday.

A teenage boy died but a mother and her five children managed to escape the inferno as it ripped through the Montana Way home (pictured) in Macquarie Fields in Sydney’s south-west.

Fire chiefs were also trawling through the ashen remains to see if there was any trace of accelerant having been used to start the fire.

‘Investigations are continuing,’ said a NSW Fire and Rescue spokesman.

The boy is believed to have been trapped in his second floor bedroom when the heat and flames cut off any hope of escape.

‘We had a very, very intense fire with flames coming out of the windows several metres,’ Fire and Rescue Deputy Commissioner Jeremy Fewtrell said at the scene.

‘Being upstairs would have been very unpleasant.’

Firefighters attempted to enter the house, but the smoke and intensity of the blaze were too strong for them to get past the front door.

Crews fought the blaze from outside and were able to enter once the blaze was brought under control.

The boy’s identity is being withheld until he is formally identified and a post mortem is carried out later this week.

The home was declared a crime scene, as officers from Campbelltown City Police Area Command launched their investigation into the fire.

Any connection between the fight and the fire will be part of the probe. 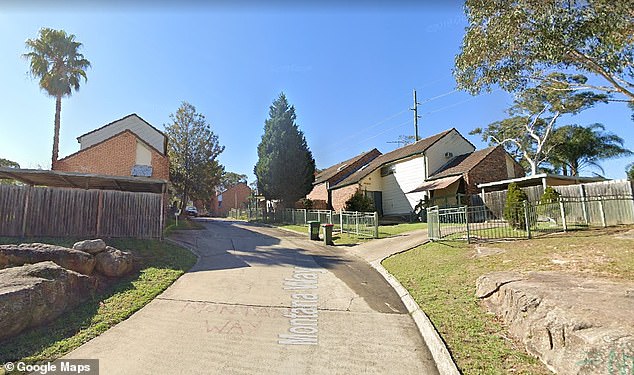 Detectives are investigating if there is any connection between an earlier street fight and the deadly blaze which erupted at 1.35am on Wednesday. Seen here is the street where the fire erupted

Campbelltown City Commander Superintendent Julian Griffiths added: ‘It is being made aware to the investigators and will be encompassed into the scope of the investigation.’

Neighbours revealed how they woke to terrifying screams as the fire took hold in the middle of the night.

‘I was in bed, I heard a lot of screaming and yelling, looked out the door and the house was on fire,’ one local told the Daily Telegraph. ‘My neighbour was screaming, “Get the kids out, get the kids out”‘.

The mother and children who escaped were woken up and alerted to the fire by a smoke alarm, said Deputy Commissioner Fewtrell.

He added: ‘One of the best defences people have in a fire is a working smoke alarm.’