By Luke Kenton and Andrew Court For Dailymail.com

The body of a budding New York YouTube star was found in the East River on Monday evening, nearly a week after he completely vanished.

Desmond Amofah, better known by his online name of Etika, was last seen in Brooklyn on Wednesday, hours after he posted an ominous eight-minute video in which cryptically hinted that he may commit suicide.

And tragically on Tuesday, NYPD officials revealed that they had located the 29-year-old’s body near South Street Seaport yesterday evening, at around 6:20pm.

‘We regret to inform that Desmond Amofah aka Etika has been found deceased,’ a tweet from the police department read.

The body of Desmond Amofah, better known by his online name of Etika, was found on Monday evening near South Street Seaport the evening before, at around 6:20pm 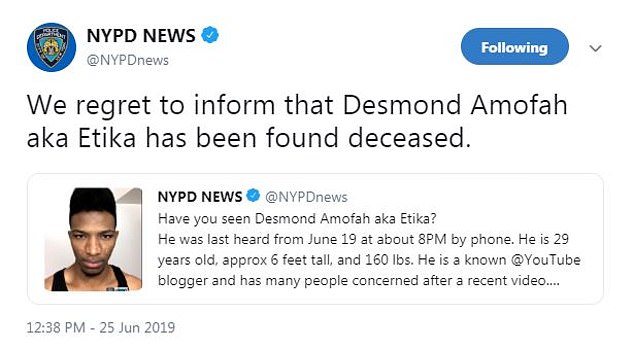 NYPD confirmed the news in a Tweet on Tuesday afternoon

A medical examiner will now perform an autopsy to determine the gaming vlogger’s specific cause of death.

He was last heard from on the evening of June 19, where he was contacted by phone after uploading what would prove to be his final video.

‘I’m sorry for leaving such a stained legacy,’ Etika can be heard saying in the distressing clip. ‘I hope that my story maybe helps to make YouTube a better place in the future where people know boundaries and limits and how far things should go.

‘You know I wasn’t suicidal before — I really wasn’t. But one thing I didn’t realize was that the walls were closing around me so fast. I really had no intention of killing myself but I’d always push it too far,’ he adds. ‘I guess I am mentally ill.’ 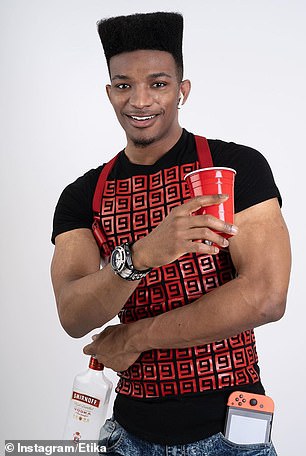 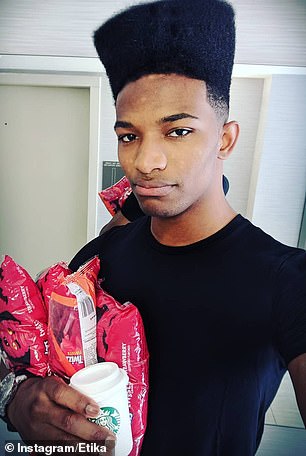 Fears for Etika’s safety grew on Wednesday evening when his wallet, cell phone and Nintendo Switch were all found by the side of the Manhattan Bridge

Concerned fans flocked to the star’s Instagram account – where he boasts 239,000 followers – to express their concern for the 29-year-old.

‘Please be safe, we can’t lose you,’ one pleaded in the comments sections beneath his most recent photo.

‘We love you from the bottom of our hearts!’ another stated.

Etika’s former girlfriend has told Inside Edition that the star has a history of mental illness, and was hospitalized as recently as April. 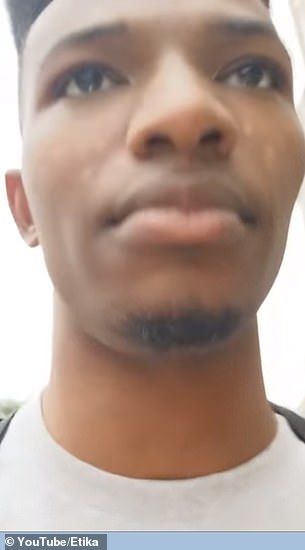 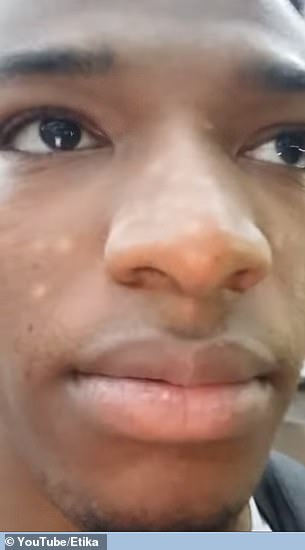 Before his disappearance, Amofah posted an eight-minute video in which he revealed he was suicidal

The woman – who dated the star from 2011 until 2017 – said he has been hospitalized several times in the past.

Fears for Etika’s safety grew on Wednesday evening when his wallet, cell phone and Nintendo Switch were all found by the side of the Manhattan Bridge.

‘Let my story be one that advises caution on too much of the social media s**t, man,’ Etika said in his final upload.

‘It will f*** you up and give you an image of what you want your life to be and it can get blown completely out of proportion, dog. Unfortunately, it consumed me.’