Bodybuilder, 28, has a pacemaker fitted weeks before her first bikini competition

A semi-professional bodybuilder has had a pacemaker fitted just weeks before her first bikini competition – despite being just 28-years-old.

Kristin Renae Hayza, from Michigan, USA, was diagnosed with a heart defect at just six-months-old.

At the time, doctors warned she only had weeks to live due to the severity of her condition.

But now, after undergoing four open-heart surgeries, she has amazed medics by overcoming her congenital disease in dramatic style.

Strength: Kristin Renae Hayza, from Michigan, USA, was diagnosed with a heart defect at just six-months-old – and narrowly avoided death after doctors initially failed to spot her state

At 10 days old, Kristin’s parents took her to the hospital as they’d noticed that she stopped breathing while nursing. Doctors remained calm and said nothing was wrong with her and that she was just a fussy baby.

‘The surgeon told my parents that I was just weeks away from suffocating in my sleep,’ Kristen says.

‘My parents were in total shock at the diagnosis because doctors said I was fine.’

To correct this, she has had four open heart surgeries – the first aged six-months-old, then at three and five years-old, before the final one at age 27.

During her final heart surgery in 2017, Kristin had a pacemaker fitted after going into complete heart block, meaning her heart was beating too slowly. 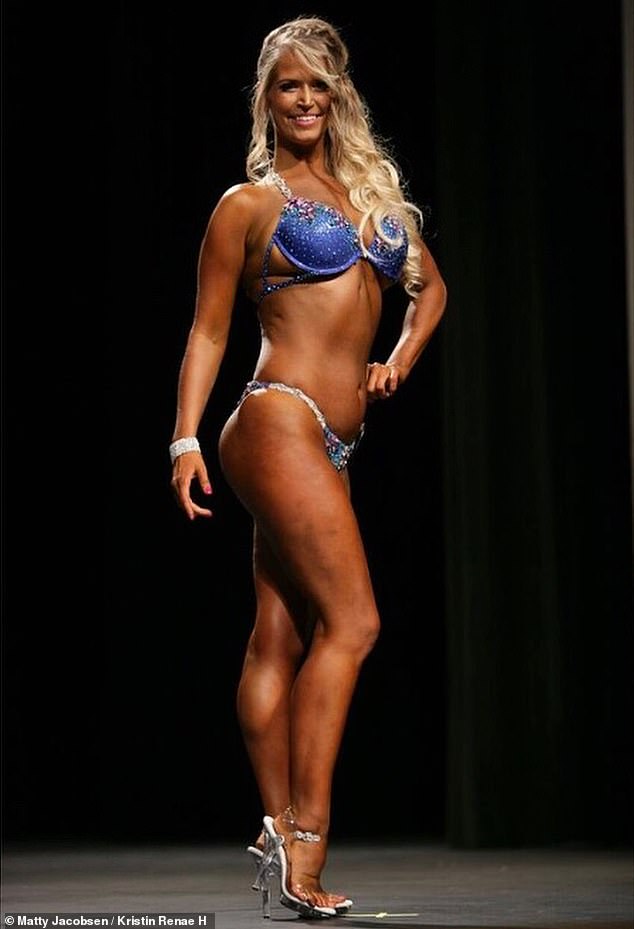 Performing in her first bikini competition: After undergoing four open-heart surgeries, she has amazed medics by overcoming her congenital disease in dramatic style

Despite enduring pain for weeks following her most recent open-heart surgery, she has worked on rebuilding her strength as she works out six days a week, and even entered her first bodybuilding competition just two months after the operation.

‘I don’t remember the recovery for my first three operations as I was so young, but the fourth was horrific to be honest. The pain and the frustration that went with the recovery was awful,’ she says.

‘I had a pacemaker put in during my fourth heart surgery after going into complete heart block. I was so disappointed about needing one and I really struggled with it for months.

‘Trusting my pacemaker has been the hardest thing for me as I’d taken heart medication my whole life until after that surgery, so to abruptly stop taking medication was difficult mentally, and then I had to trust the device on top of that.

‘I’ve been ill my entire life. I’ve had great years and tough years when it came to my health. I’ve had doctors’ appointments, test after test and limited myself out of fear of something bad happening.’ 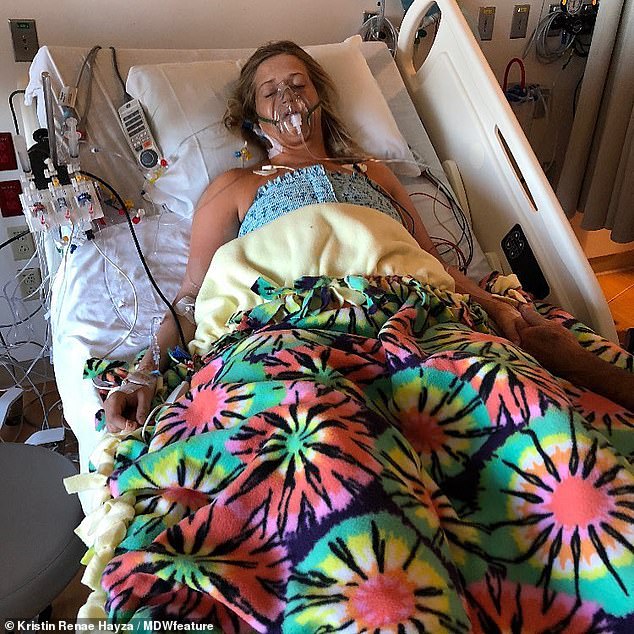 Post-surgery: Kristin is pictured in recovery after having a pacemaker fitted last year 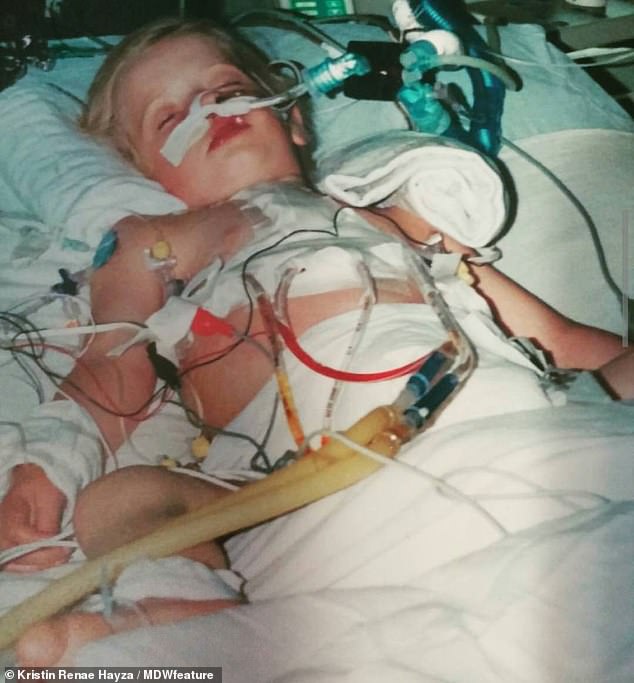 Childhood: Kristin in 1995 after the Fontan procedure, which involves involves redirecting oxygen-poor blood from the top of the body to the lungs

‘I was told not to do sports or anything that would raise my heart rate too much, so I didn’t do a whole lot of strenuous activities growing up,’ she said.

‘When I got a new cardiologist in 2013, he told me to make my own limits because I know my body better than anyone else, so I started pushing myself more.

Some days I can barely walk on the treadmill without having to take breaks, but for the most part I do well. I’m always going to have a bit of a setback because of what I’ve been through and living with only half a heart, but I do what I can

‘I never thought I’d be where I am now. I’m the healthiest I’ve ever been, and I can keep up with people at the gym. My life’s been non-stop health issues – if it wasn’t my heart it was my blood platelet issues, or if not that it was my colitis.

‘I feel like I never truly had a break from appointments and tests. Now though, I am in such good shape physically and mentally, and I hope to push the boundaries a little more.’

Taking it one step further, she then embraced body-building with the help of her brother, Jake.

‘For most of my life I had struggled with depression and anxiety attacks due to being ill and not knowing what would happen in the future. It put a huge mental, physical and emotional toll on me.

‘I did some research and found that working out can help with mental health, so in 2014 I decided to give it a try. As I got more involved in fitness and started to achieve more, it began to be more of an obsession.

‘I decided about a month after my fourth heart surgery that I was going to enter in a competition and I prepped for 36 weeks after. It was extremely hard and challenging but I’m so glad I did it despite wanting to give up at points. 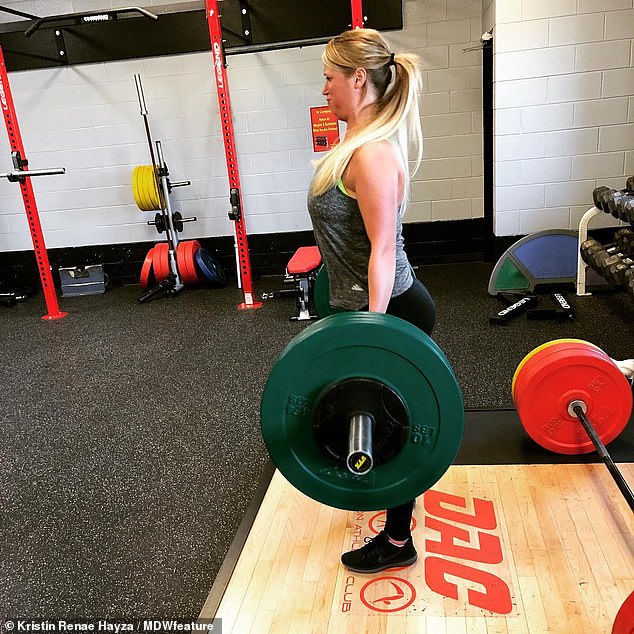 ‘I can lift heavy for a person who has had her chest cracked open multiple times. It depends how I’m feeling each day, but chest days are tough. I still have a lot of pain from the most recent heart surgery, so I do light weights on chest day.’

‘I work out six days a week doing training and cardio, then one rest day. My training is usually an hour long and I do about half an hour of high intensity interval training (HIIT) every day.’

Now, by sharing her story, Kristin hopes to inspire others who have been diagnosed with congenital heart disease and who spend their entire life feeling restricted.

‘The past will always affect my training. If I’m having a bad day then I have to take things slower or lighter,’ she added.

‘Some days I can barely walk on the treadmill without having to take breaks, but for the most part I do well. I’m always going to have a bit of a setback because of what I’ve been through and living with only half a heart, but I do what I can.

‘Having a pacemaker does have an impact because I can feel it when I do abs, deadlifts and while running. It’s such an awful feeling and I absolutely hate it. 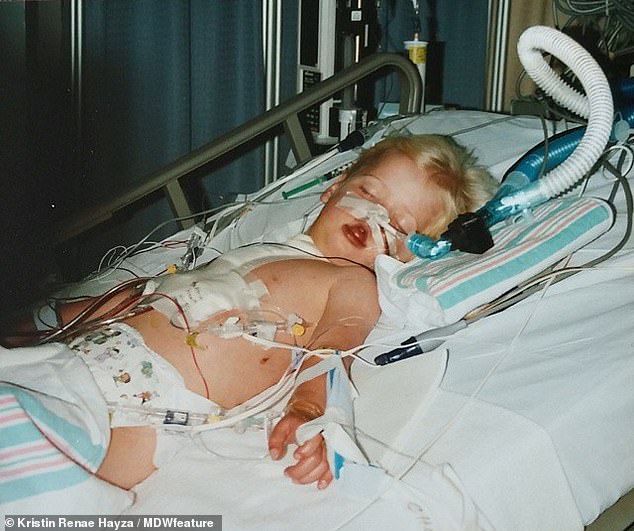 ‘When someone’s child is diagnosed with congenital heart disease, the parents aren’t always given much hope, or they’re told their child won’t have a great life. So, I do this to give them just a little bit of hope for what their child may be able to do in the future,’ she says

WHAT IS CONGENITAL HEART DISEASE?

Congenital heart disease is a general term for a range of birth defects that are present at birth.

The most common heart defects include:

Septal defects: When there’s a hole between two of the heart’s chambers, which is known commonly as a ‘hole in the heart’.

Coarctation of the aorta: Where the main large artery of the body, is narrower than normal

Pulmonary valve stenosis: When the pulmonary valve is narrower than the normal. This valce controls the flow of blood from the heart to the lungs.

Transposition of the great arteries: When the pulmonary and aortic valves and the arteries they’re connected to have swapped positions.

‘I’ve even spoken with my cardiologist about having it moved to another part of my body, which we’re still discussing now. I’m hoping to adjust to having it and learning to feel more comfortable with it.

‘My friends and family have always been very proud of me. Hearing the cheers from them as I walk on stage is very comforting.

‘When someone’s child is diagnosed with congenital heart disease, the parents aren’t always given much hope, or they’re told their child won’t have a great life. So, I do this to give them just a little bit of hope for what their child may be able to do in the future.

‘It’s usually an invisible illness and just because we don’t look sick doesn’t mean we aren’t.

‘It’s a tough sickness to have and to cope with, so please be compassionate when you hear that someone has congenital heart disease because they will be struggling.’