A bogus handyman who battered a 96-year-old D-Day veteran with a hammer and left him for dead has been sentenced to 20 years in jail.

Joseph Isaacs, 40, knocked on Jim Booth’s door and offered him a good rate on roof repairs on November 22 last year.

When Mr Booth refused, Isaacs launched his attack, hitting the veteran with a claw hammer on his head and arms while shouting ‘money, money, money’.

He suffered life-threatening injuries including ‘five deep lacerations’ to his skull, with a ‘number of underlying skull fractures’.

Brave and stoic Mr Booth, who joined the Royal Navy aged 18 and served throughout the Second World War, said of the attack: ‘Yes well, worse things happen at sea as they say, in war.’

Isaacs stole his bank card and went on a shopping spree the following day, spending £6.48 in McDonald’s, £13 in Asda and £7.75 on cigarettes.

D-Day hero Jim Booth was ‘left for dead’ after being hit with a claw hammer by a robber who stole his bank card. Speaking out after the experience he said ‘worse things happen at sea’ 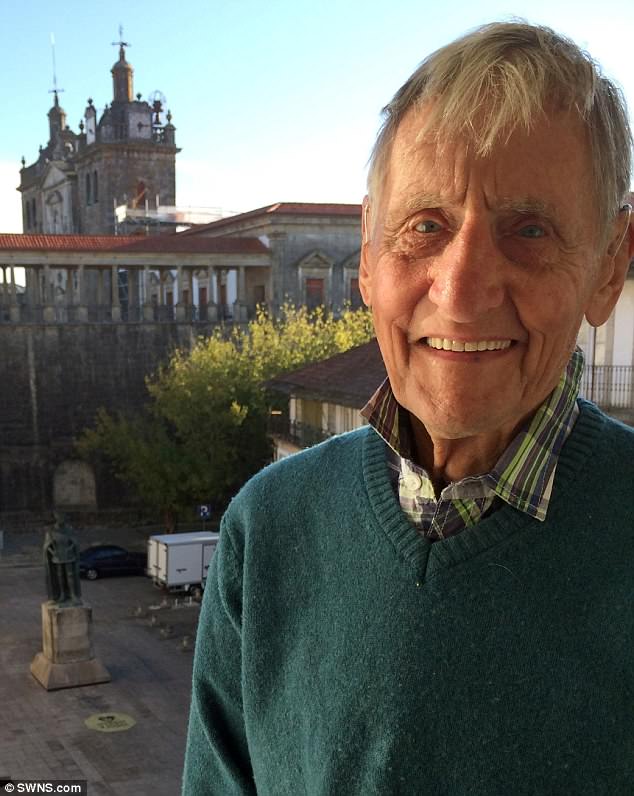 The Duchess of Cornwall dances with Royal Navy veteran Jim Booth, 94 from Taunton, in August 2015 at a veterans’ day celebration

Sentencing, Judge David Ticehurst said Mr Booth was an ‘extraordinarily remarkable gentleman’ who Isaacs ‘savagely attacked with a claw hammer which you took with you for that purpose’.

He said: ‘It was a brutal and utterly senseless attack on him. Jim Booth was 96 years old, living on his own but with remarkable independence and vigour. Joseph Isaacs, pictured in a court sketch as he appeared via videolink, denied attempted murder

‘The affect upon him and his family has been devastating as is clear from Mr Booth’s victim impact statement.

‘His daughter Victoria Pugh also spoke of the affects of your crimes on them.

‘That your crimes have had such a devastating and damaging impact on them is something you should reflect upon in the years before you.’

Judge Ticehurst said he considered Isaacs, who had committed the crime for a ‘paltry’ amount of money and then showed an ‘apparent lack of remorse or concern’, to be dangerous and therefore meet the criteria for an extended sentence.

Mr Booth was later told that one of the injuries on his arm showed that he had hit back.

Playing down his resistance, he said: ‘I think I probably just defended myself.

‘But I’m very much saying, I blame myself because I was special services you know, I think I should really have known how to deal with this but I didn’t, I was too old obviously.’

During the war Mr Booth joined the Combined Operations Pilotage and Reconnaissance Parties (COPP) and trained for covert beach explorations at a wartime military base set up on Hayling Island in Hampshire in 1943 under the instruction of Lord Mountbatten.

Mr Booth’s daughter, Vicky Pugh read a family victim impact statement to the court, at times becoming so emotional that she struggled to continue.

She said: ‘Our father has always been our own family hero, our captain of the gate and we are immensely proud of him every day … (he is) soon to celebrate his 97th birthday. He remains unbowed.’

Ms Pugh said her father was a ‘wonderful person’ who for 10 years had dedicated himself to caring for his wife Berry, who was diagnosed with Alzheimer’s disease, for 10 years prior to her death in 2009.

She said: ‘She couldn’t have had a a more loving and devoted husband. In the years since we lost our mother, our father has immersed himself in taking an active part in the community, leading an extremely busy and independent life.’

Ms Pugh said since the attack he had been forced to miss family events and could no longer use his bicycle while there seemed to be no treatment for his debilitating head pain.

She added: ‘Our father has shown extraordinary courage, determination and resilience as he battled with the effects of these injuries.’

Mr Booth became a submarine pilot for the X-craft, tiny submarines that waited on the seabed for days at a time, at the age of 23.

His team sailed from Portsmouth to Normandy to scout out where the British could safely land and on D-Day, Mr Booth climbed into a fold-up canoe and shone a beacon out to sea to guide Allied craft safely to shore.

Mr Booth was later awarded a Croix de Guerre military medal by the French for his gallantry.

Describing the attack, Mr Booth said the doorbell had rung – something which he was used to because ‘in those days I never bothered about security’.

He said: ‘There was this guy outside and in his hand was this obviously brand new, very shiny, claw hammer. He said “oh I’m a builder”.

‘I said “what’s the problem”. He said “well I see that slates up there just by the roof look at bit loose and we could give you a very good deal”.’

He added: ‘And then he started shouting “money, money, money”. He started lifting the thing and advanced on me, pushed me backwards, right up the passage coming into this room, from the front.

‘I now know that he, well I didn’t really remember it, but he hit me six times on the head as well as more on the arms with the claw hammer and the claw side of it too.’

Mr Booth, a keen cyclist, runner and gym-goer prior to the attack, said there were certain things he was no longer able to do because he was suffering from loss of balance but that he would go back to the gym as soon as he could. Isaacs, pictured, hit the veteran with a claw hammer on his head and arms while shouting ‘money, money, money’ He was arrested after police were able to trace the bank transactions and link them to a vehicle which was found to be registered in the name of Isaacs’s father (pictured: Isaacs during the arrest)

Speaking of Isaacs, Mr Booth said: ‘Presumably something terrible happened in his life and who knows what it was and turned him into a near monster.

‘So to that extent I understand but obviously I can’t understand what he did frankly and why, there seems be no reason why. That’s how I am at the moment.’

Rachel Drake, prosecuting, told the jury Mr Booth tried to evade his attacker by retreating into his home but collapsed in his living room.

She said: ‘Mr Booth fell to the floor near a coffee table and he remembers thinking, “Oh God, I am dead”… Once Mr Booth was incapacitated the defendant took his wallet and, the Crown say, left him for dead on his living room floor.’

Isaacs, who appeared at the trial via video link from HMP Long Lartin, denied the charge of attempted murder.

Jurors were told they would hear Mr Booth tell them that he was ‘surprised’ that the hammer in Isaacs’s hands was shiny and new, rather than worn as he would expect from a workman and also that he thought it bigger than a standard hammer.

Ms Drake said Mr Booth initially did not believe he had lost consciousness during the attack but concluded that he may have done after realising he had no recollection of Isaacs searching his things.

The court heard once he regained consciousness Mr Booth tried to find his mobile phone but could not and his landline phone appeared to be out of battery. 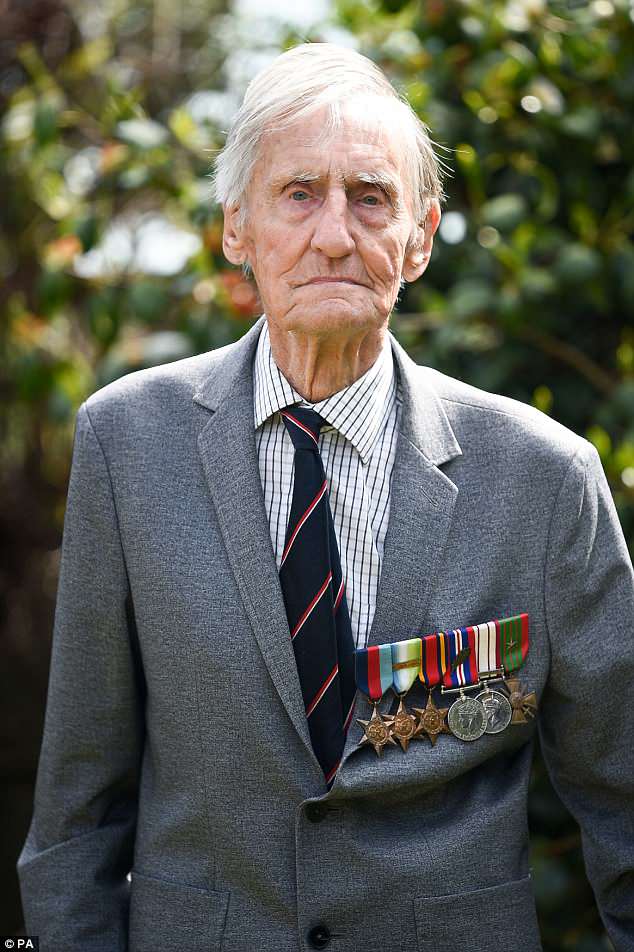 Mr Booth, a keen cyclist, runner and gym-goer prior to the attack, said there were certain things he was no longer able to do because he was suffering from loss of balance but that he would go back to the gym as soon as he could 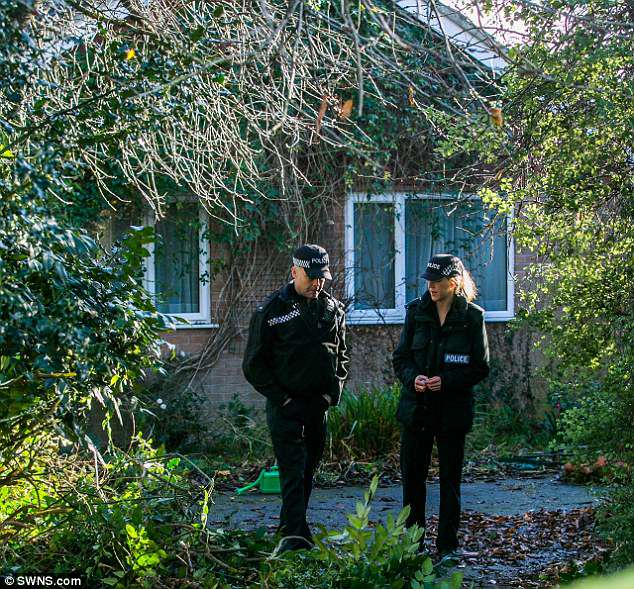 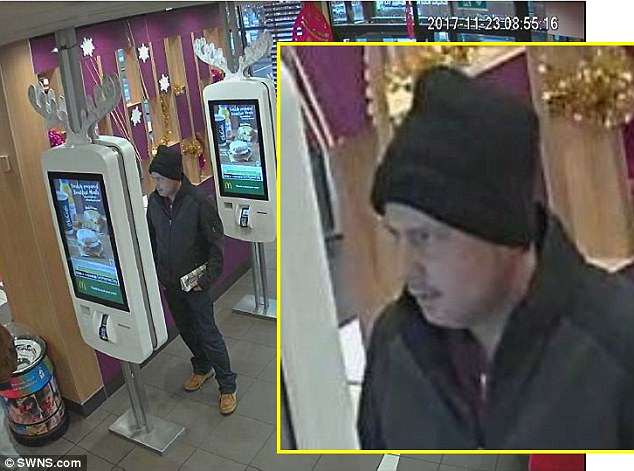 Isaacs used the stolen bank card and went on a shopping spree the following day, spending £6.48 in McDonald’s, £13 in Asda and £7.75 on cigarettes (pictured: Isaacs using the card in McDonald’s)

Eventually he managed to raise the alarm with neighbours after making his way out into the street.

The court heard one neighbour spotted Mr Booth and saw that his head and hands were covered in blood.

Mr Booth was taken to Musgrove Park Hospital in Taunton where Ms Drake said he was found to be suffering from ‘life-threatening injuries’.

He also had lacerations on both hands and a fracture to his right hand.

‘The force required to cause the depressed skull fractures would have been severe,’ she said, adding that the injuries to Mr Booth’s arms were consistent with him having moved them in front of his face and head to protect himself. 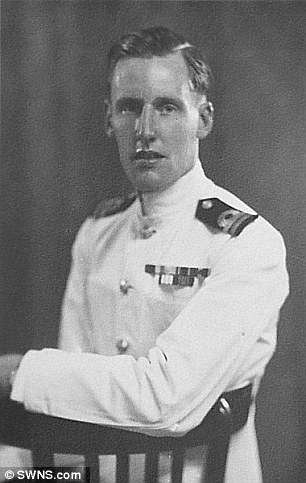 Mr Booth joined the Royal Navy as a seaman at the age of 18, serving throughout the war

The jury heard that shortly after the attack Isaacs used Mr Booth’s NatWest bank card, which had been in his wallet, in Burger King at the Bridgwater Services on the M5.

He also bought a drink in a pub but when he attempted to use the card at 12.30pm in Burnham-on-Sea it was declined, the jury was told.

Ms Drake said officers were able to trace the transactions and link them to a vehicle which was found to be registered in the name of Isaacs’s father.

They spoke to his mother Cathleen Isaacs who told them she had reported her son missing on November 14. Isaacs was arrested on November 24.

On Friday, following a five-day trial at Taunton Crown Court, a jury found Isaacs, of no fixed abode, guilty of attempted murder after deliberating for less than two hours.

The jury had heard how Isaacs, who previously lived at home with his parents, had been sleeping in his car in the days and weeks leading up to his attack on Mr Booth.

He claimed that he was in the middle of a ‘nervous breakdown’ having broken up with his girlfriend and had not eaten for four days when he decided to approach Mr Booth’s home.

The court heard no evidence that Isaacs was suffering from mental health difficulties and Rachel Drake, for the prosecution, labelled his defence ‘a desperate attempt to minimise what he had done’.

After hearing the verdicts Rachel Drake, for the prosecution, told the court Mr Booth would like to be present for the sentencing.

Judge David Ticehurst agreed and said he would sentence Isaacs, who is appearing in court via video link from HMP Long Lartin, at 2pm on Friday.

Isaacs will also be sentenced for causing GBH with intent, aggravated burglary and six counts of fraud, which he earlier admitted in relation to the incident.

As the jury was leaving the court, one of Mr Booth’s family members, who have been present throughout the trial, said of Isaacs: ‘He is out of our lives, thank you.’

‘When Mr Booth declined the work being offered, Isaacs forced his way in, demanded money and subjected Mr Booth to a prolonged and barbaric ordeal.

‘He used a claw hammer to strike Mr Booth repeatedly to the head and body – even hitting him multiple times while he lay on the floor.

‘It was a cowardly act and it’s a miracle Mr Booth survived these horrific injuries.’

Mark Major, from the CPS, said Isaacs had ‘attacked a vulnerable elderly man in his home, leaving him for dead on his living room floor so that he could search his home for money and valuables’.

He added: ‘Isaacs admitted he attacked Mr Booth and used his bank cards following the burglary but denied attempted murder.

‘The CPS showed in court that Isaacs had intended to kill Mr Booth, producing evidence from doctors that showed the force and severity of the attack and his injuries.’