A trove of documents released by Florida prosecutors have revealed gruesome new details related to the murder and dismemberment of Nicole Montalvo, including how  her estranged husband and father-in-law allegedly buried her organs using an excavator, then sent fake text messages from her phone to make it seem as if the mother had abandoned her son and left.

Montalvo, 35, was last seen alive on October 21 when she dropped off her son, Elijah, at the home of her estranged husband’s parents. She was supposed to pick up the child from school the next day, but never showed up.

Officers discovered her remains buried in two to five feet of dirt on two properties in St Cloud associated with her father-in-law and his family, leading to the arrests of Christopher Otero-Rivera, 32, and his father, Angel Luis Rivera, 63. 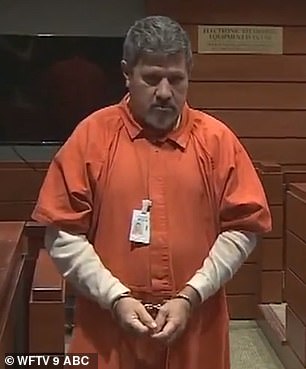 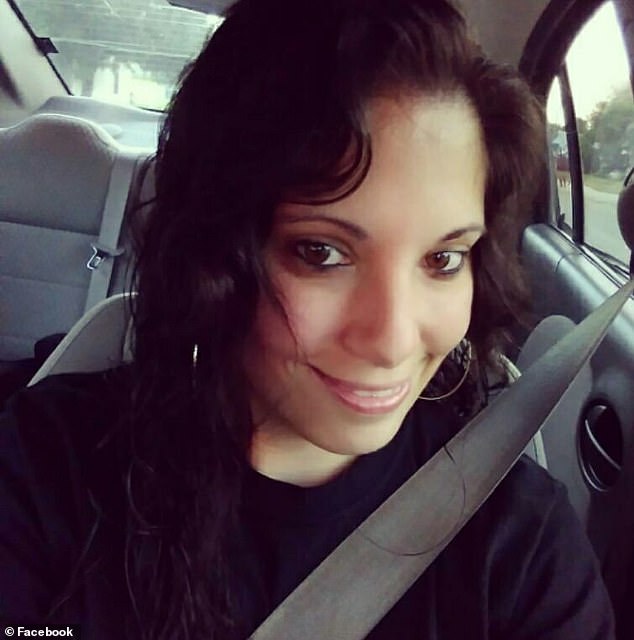 Montalvo, 35, was killed and dismembered on her in-laws’ property in St Cloud, Florida, on October 21, 2019 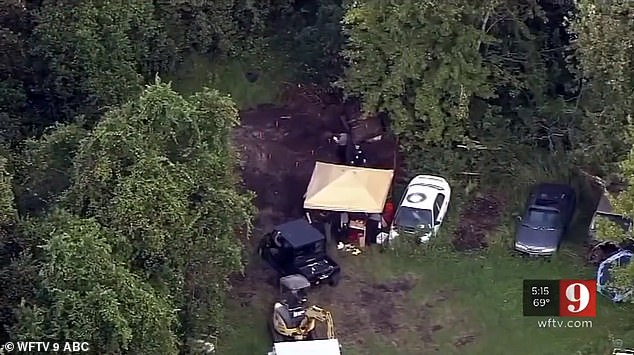 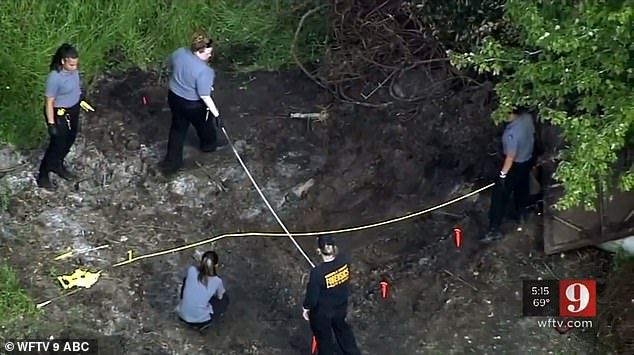 According to 1,160 documents released by the Orange-Osceola State Attorney’s Office on Tuesday, when a detective interviewed Rivera while investigating Montalvo’s disappearance, he told them he received a text message from her on the day she dropped off her son at his home.

‘I’m really sorry about everything,’ the text read. ‘I should have listened to you. I made a bad mistake. I need you and Wanda to take care of Elijah for a few days until I get things figured out. Please do this for Elijah. I am with a friend that is going to help me through this. Tell [him] Mommy loves him.’

But the detective wrote in a report that he believed the message was fake because the location data showed that Montalvo’s phone never left her father-in-law’s home.

According to  the records, investigators established that the suspects used an excavator that Rivera had rented through his non-profit organization to bury his daughter-in-law’s organs.

A woman who was renting a room from the family told detectives that she saw Angel and his son using the heavy machinery in the yard, and that Angel’s wife, Wanda Rivera, would not let Montalvo’s son join them, which struck her as odd because the boy was usually in the company of his father and grandfather whenever they worked outside.

According to the records, data from Otero-Rivera’s ankle monitor, which he was wearing at the time, placed him at the scene where his ex-wife’s remains, including her liver and spleen, were later recovered. 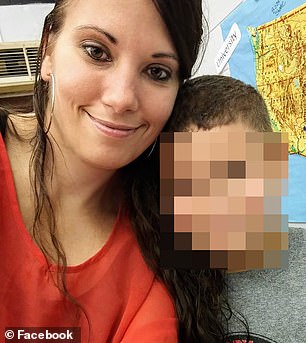 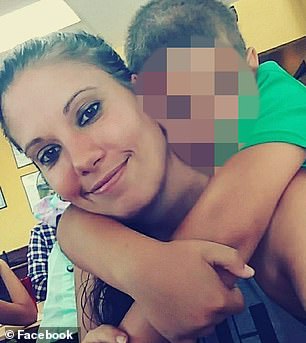 Rivera claimed he had received a text message from his daughter-in-law saying she was leaving her son, Elijah, with his family because she needed to leave to ‘get things figured out.’ Detectives believe it was Rivera who sent the message to himself 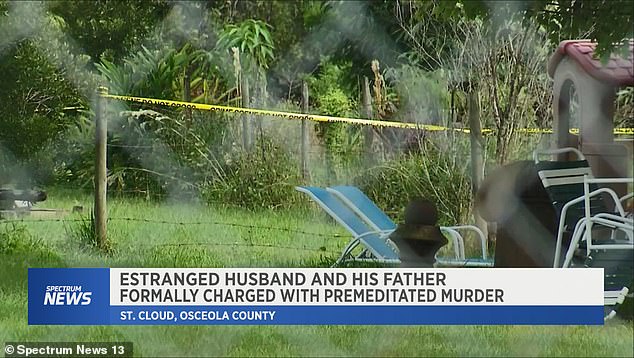 Additional organs were found at the home of his brother, Nicholas Rivera, who was subsequently arrested on child pornography charges.

Under questioning, Nicholas told detectives that he was at his father’s home on the day Montalvo was murdered.

He said that when he entered the garage on the property, he saw his sister-in-law’s lifeless body laying in a pool of blood.

At the urging of his mother, Nicholas left, but returned to the home that evening to find his father driving the excavator back and forth in the yard, then cleaning an orange push cart.

Forensic tests later indicated the presence of blood on the garage floor and door, on the push cart, in the laundry room, as well as on loppers, pruning shears and a machete.

The documents do not clarify how investigators think Montalvo was killed.

According to the Osceola County Sheriff’s Office, at the time of Montalvo’s disappearance and subsequent death, she and her husband were in the midst of a separation.

A year ago, the mother-of-one had her husband arrested on charges of kidnapping, domestic abuse and theft, after accusing him of beating her and stealing her credit cards and cash, according to MyNews13.com. 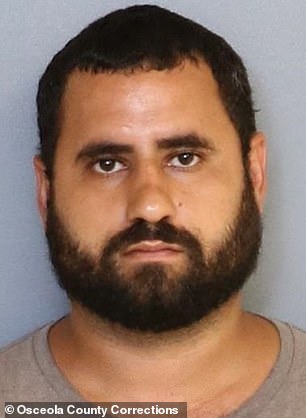 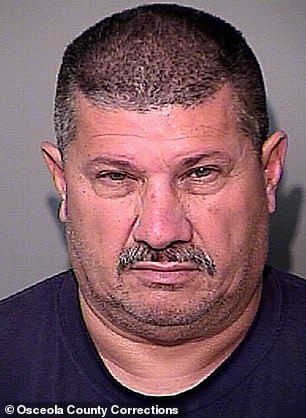 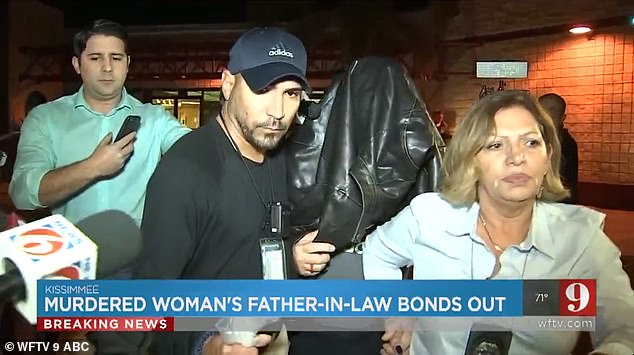 Rivera was released on Monday night (pictured hiding beneath a jacket) after a judge reduced his bond from $350,000 down to $160,000

Montalvo told investigators last October that Otero-Rivera and a woman, identified as 31-year-old Toni Rocker, took her to a remote area, where her estranged husband proceeded to slap her across the face for texting a friend.

He then allegedly hurled Montalvo to the ground, stuffed a rag in her mouth, tried to break her neck and threatened to kill her if she called 911, WESH2 reported.

Rocker, who allegedly held Montalvo at knifepoint during the attack, was later acquitted at trial of kidnapping, robbery, and aggravated assault charges. She is not considered a suspect in Montalvo’s death, according to officials.

Meanwhile, Otero-Rivera pled no contest to hindering a witness’s ability to communicate with law enforcement, unlawful possession of a credit or debit card, and battery. The more serious charges of kidnapping, robbery, and aggravated assault were dropped in the agreement.

Otero-Rivera pleaded no contest to charges of battery, hindering a witness’s ability to communicate with law enforcement and unlawful possession of a credit or debit card. In exchange, prosecutors agreed to drop the more serious charges of kidnapping, robbery, and aggravated assault.

He served just eight months in jail, after getting credit for time served, followed by two years of probation, according to Orlando Sentinel.

Under the conditions of his plea agreement, he was barred from having any contact with Montalvo, except through a parent communication app.

Just weeks before her death, Montalvo sent a letter to a judge asking to dismiss a protection order she had against Otero-Rivera since June 2016, when she accused him of attacking their son. 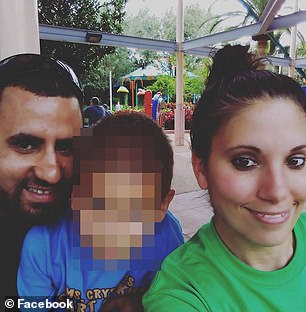 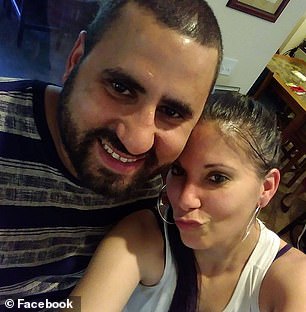 In 2018, Montalvo had her husband arrested on kidnapping and domestic abuse charges. Otero-Rivera ultimately pleaded no contest and was sentenced to probation

In her request to the judge, the mother said it was in the best interest of their son to have the protective order dropped.

According to social media posts, Montalvo worked as a server at a pizza parlor in Kissimmee, Florida.

Her final status update went up on her page on the morning of October 21, just hours before her disappearance.

Montalvo wrote that she was watching the 1997 film Selena, where Jennifer Lopez portrays the eponymous Mexican-American pop star who was murdered by a fan at age 23.

Days earlier, according to the newly released records, Montalvo confided in a friend that her estranged husband and his father threatened to hack into her Facebook account and downloaded a nude photo of hers as part of an alleged plot to have her son taken away from her.

Otero-Rivera remains jailed without a bond on a probation violation charge.

As of Wednesday morning, prosecutors have not indicted the father and son for the murder of Nicole Montalvo, drawing the ire of Osceola County Sheriff Russ Gibson.

‘We’re disappointed with the decision of the State Attorney not to take this case and move forward with it,’ Gibson told Spectrum News 13 earlier this month. ‘I’ve seen cases that there’s not even a body and people are convicted of murder.’