Production of the Learjet, which became synonymous with lifestyles of the rich and famous as the private jet of choice for Frank Sinatra, will halt later this year after nearly 60 years, Canada’s Bombardier announced Thursday.

The aviation company said that it plans to focus on more profitable planes after the Learjet fell out of favor and private-plane buyers switched to larger, more comfortable, longer-range models.

The announcement means the elimination of 1,600 jobs in Canada and the United States, another blow to aircraft manufacturing, which has withered in the pandemic.

The iconic jet, which is made in Wichita, Kansas, was among the first private luxury planes.

Inventor William Lear based his design in part on Swiss military jets which allowed it to fly as fast as a transatlantic Boeing 707 yet remained glamourous. Among Lear’s other inventions was the 8-track cassette player.

However, it became especially iconic in the age of 1960s celebrities Sinatra, Marlon Brando, and Dean Martin.

Sinatra famously let Elvis Presley borrow his Learjet to elope with Priscilla Beaulieu in 1967, as pictured above 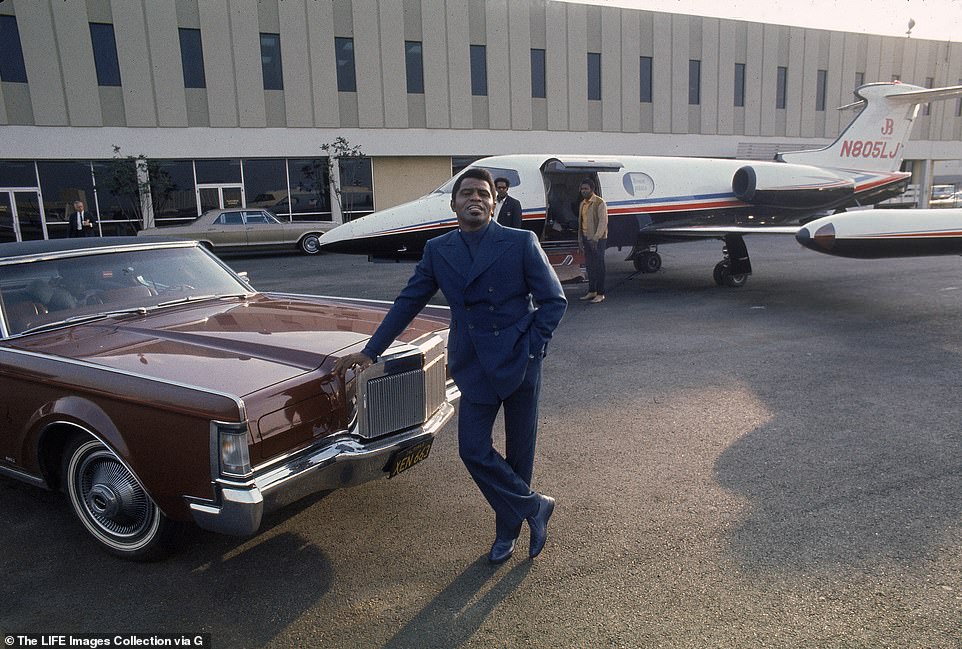 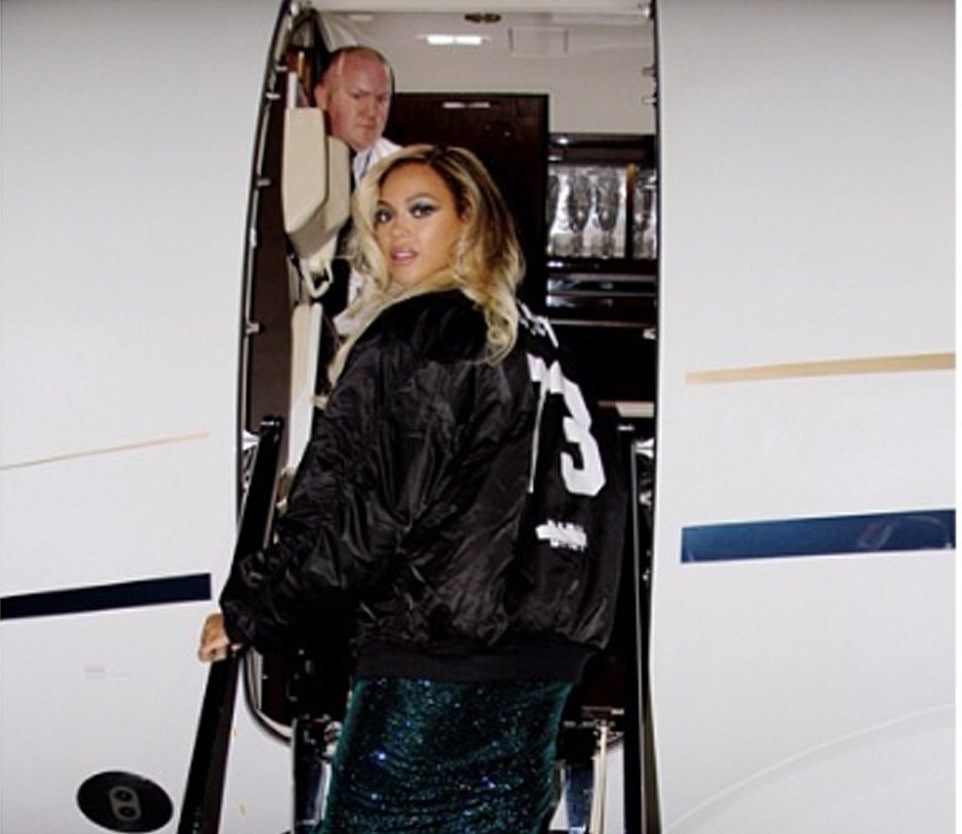 Beyonce as she boards a Learjet.  Jay Z owns a Challenger, built by Canadian conpany Bombardier 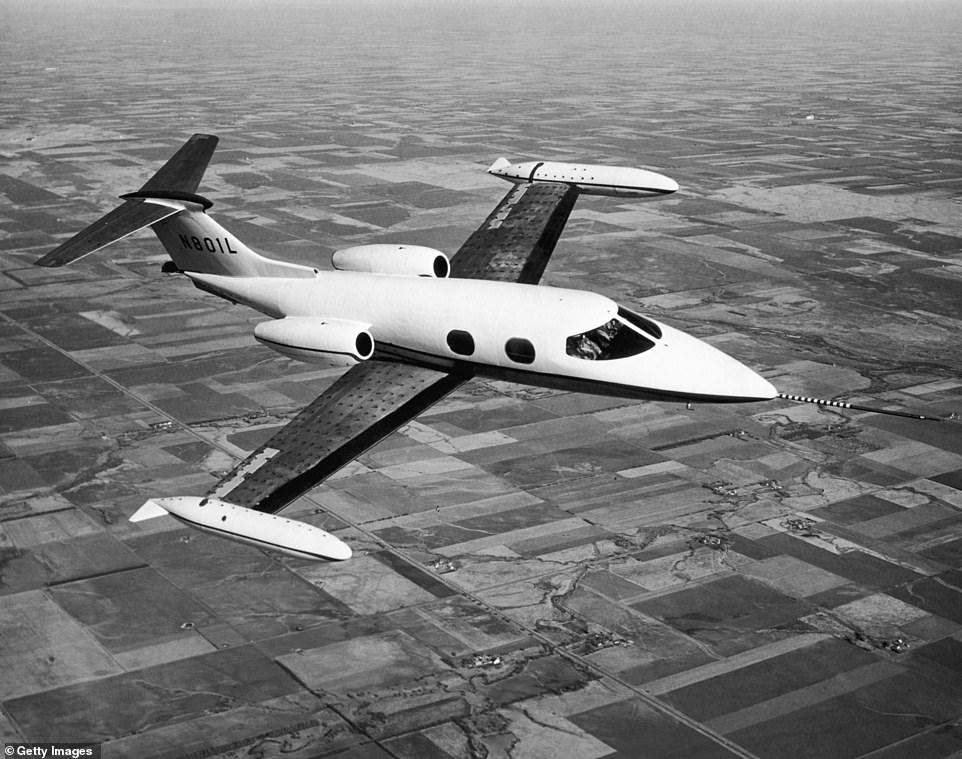 Pictured, a prototype Learjet 23 executive jet on a test flight on February 24, 1964

At the time, Lear and other aircraft builders relied on celebrity endorsements to sell planes and Sinatra became an early adopter in 1965 as he took delivery of a Learjet 23 that he named Christina II, after his youngest daughter.

Prior to owning the snappy six-seater, Sinatra had owned a 40-seat airliner and a Morane-Saulnier MS.760 Paris – a French military trainer used as a business jet.

By this point in his career, Sinatra was already chairman of his own record label, director of his own film company, a major player in real estate and an investor.

The next year, the couple jetted of on their honeymoon to the south of France on the plane.

Sinatra also famously let Elvis Presley borrow his Learjet to elope with Priscilla Beaulieu in 1967. The couple flew from Palm Springs to Las Vegas for their eight-minute wedding ceremony in the jet before it took them straight home again.

And it was on the Learjet that Sinatra allegedly grilled actor Michael Caine over his intentions for his daughter Nancy.

Dean Martin was said to be a regular passenger on Sinatra’s jet, and it was also used to fly Sammy Davis Jr and Marlon Brando to Mississippi to join Martin Luther King Jr on a freedom march.

Along with being a line in Carly Simon’s 1971 hit, ‘You’re So Vain,’ the Learjet showed up elsewhere in pop culture, including the hit TV show ‘Mad Men.’

In the song, Simon stated: ‘You flew your Learjet up to Nova Scotia, to see the total eclipse of the sun.’

It has never been revealed who the song was about, but it was believed to have been actor Warren Beatty.

The jet, the latest version of which $21 million, was also referenced in Pink Floyd’s song ‘Money’. 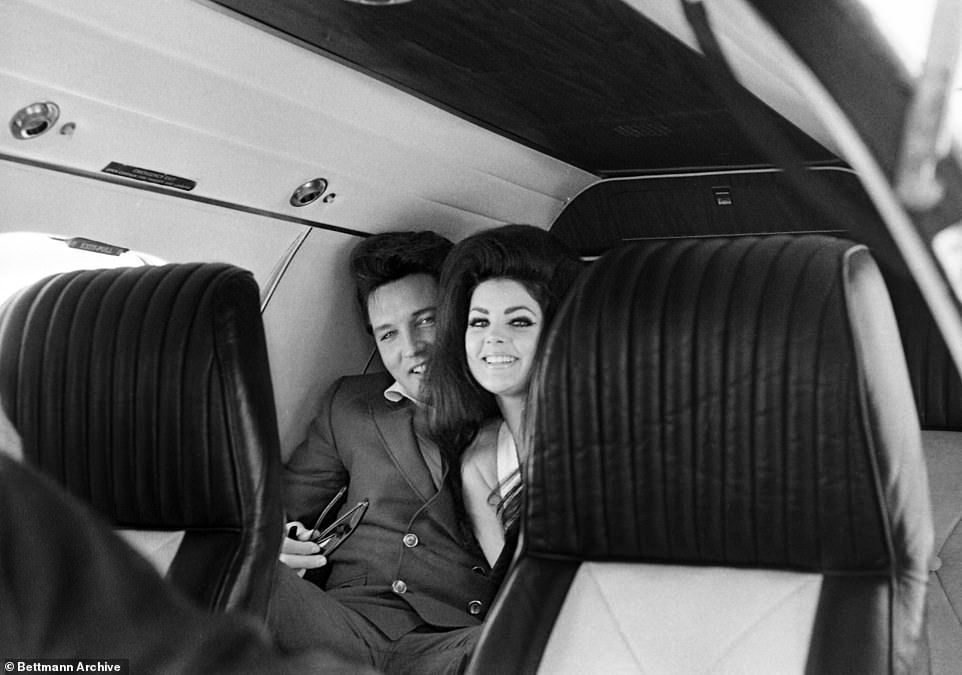 Singer Elvis Presley peeks out from behind his wife, Priscilla Ann Beaulieu, as the couple sit in a chartered jet airplane after their wedding at the Aladdin Hotel in Las Vegas in 1967. The couple had borrowed Sinatra’s Learjet plane to fly to the wedding 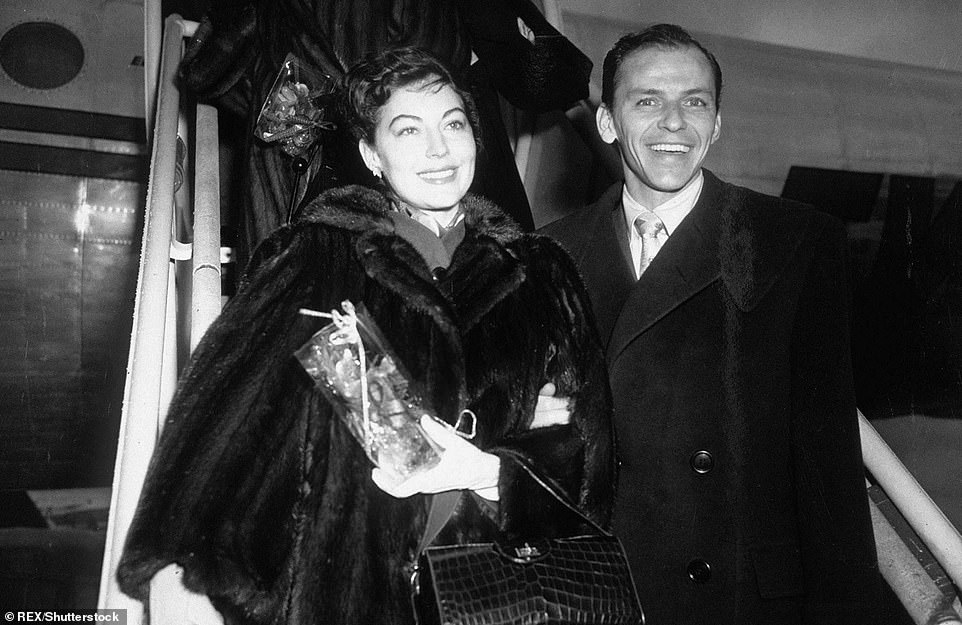 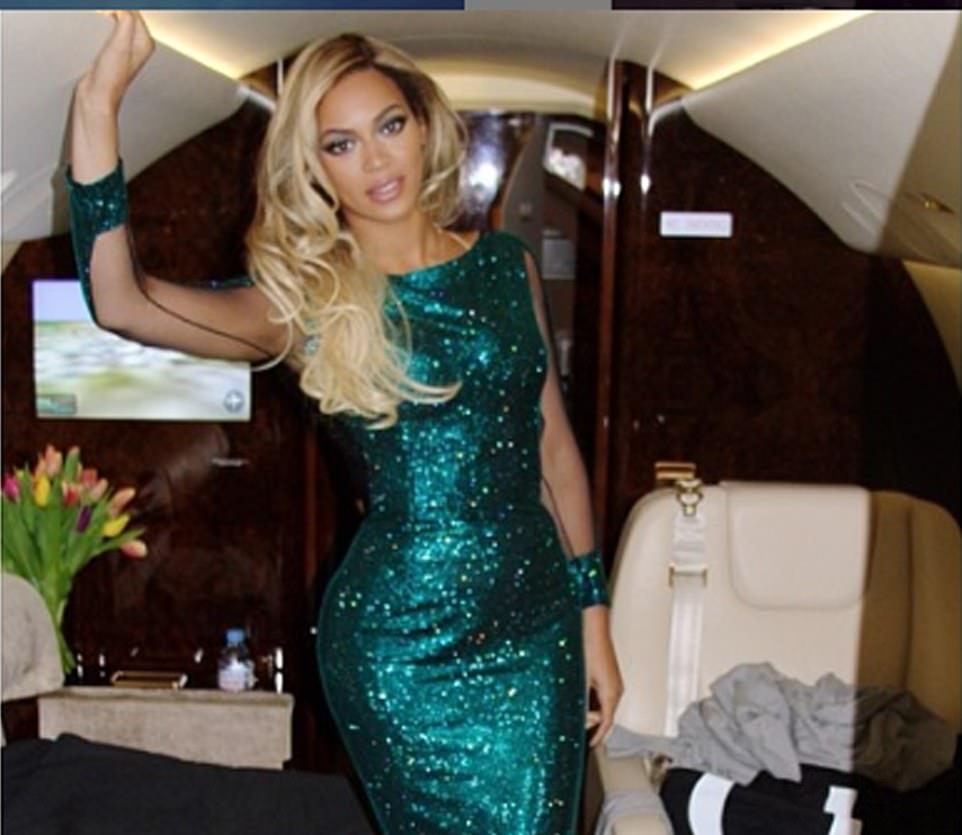 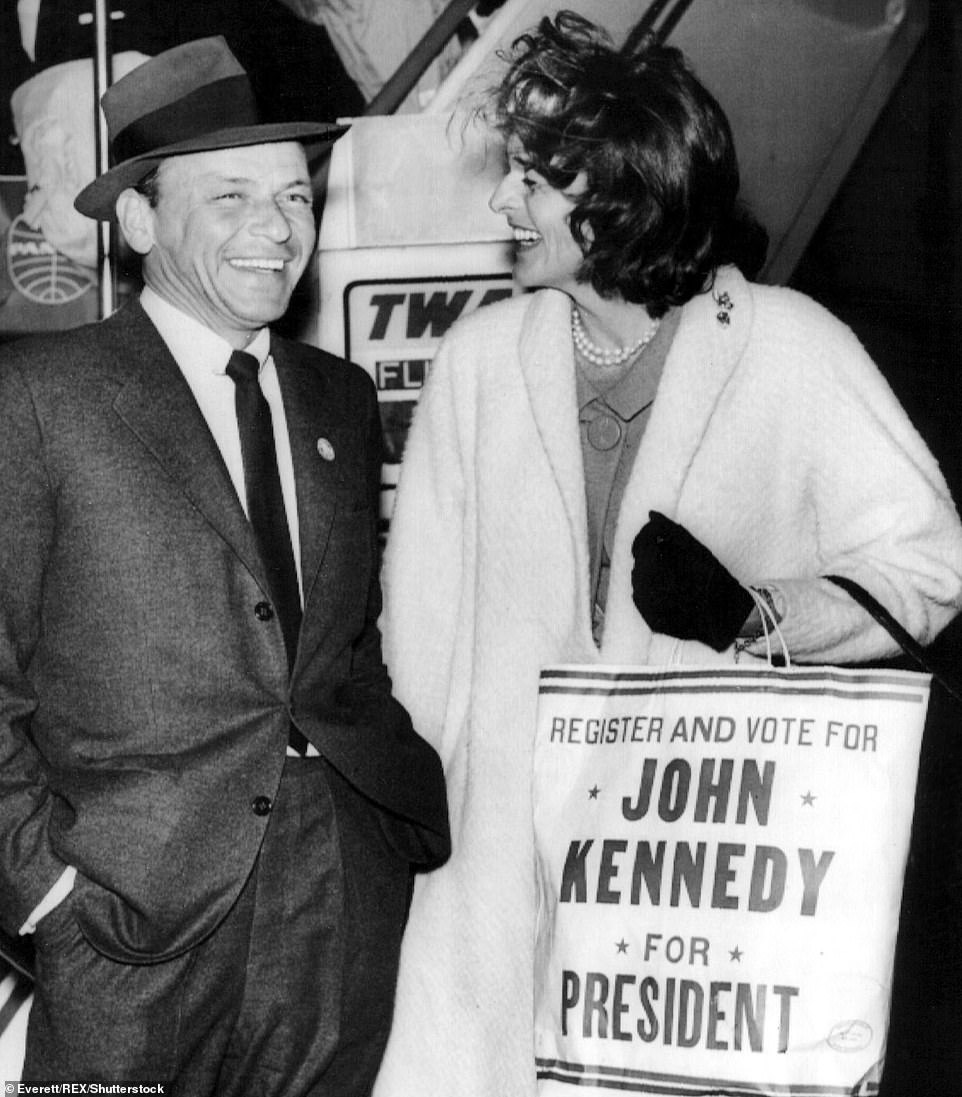 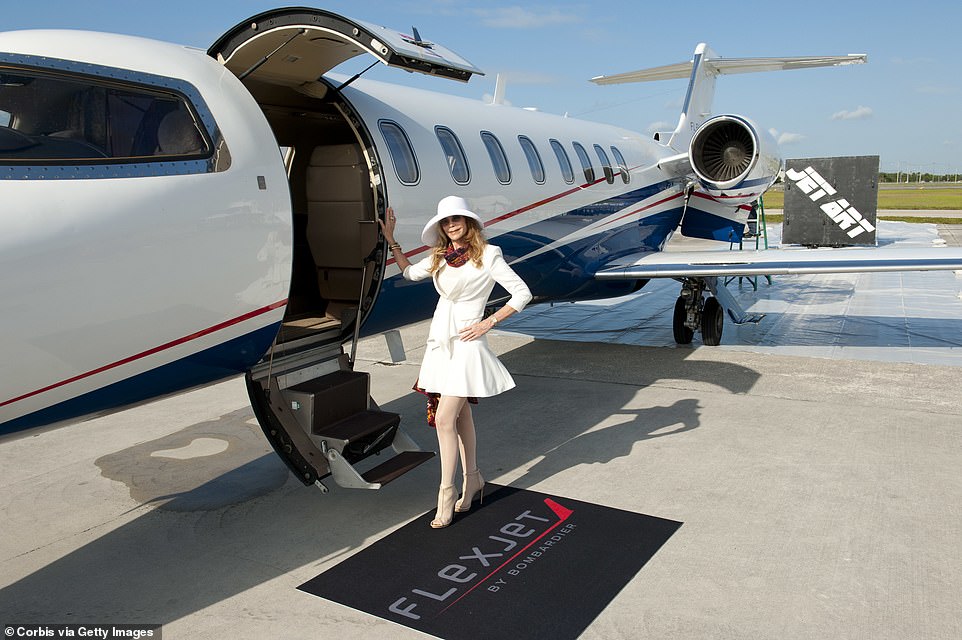 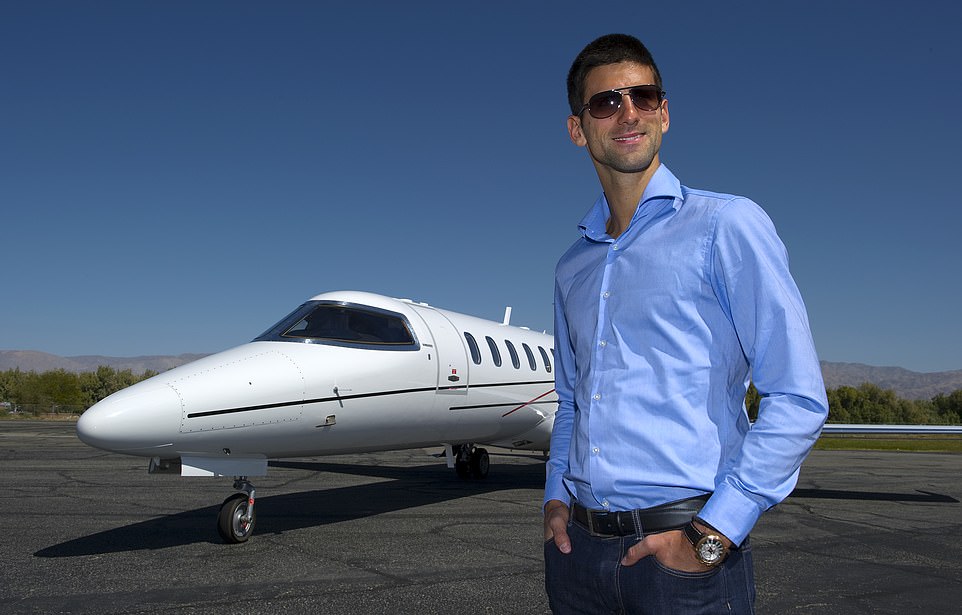 ‘It was sleek, and it had almost a fighter-jet pedigree,’ said Richard Aboulafia, an aerospace analyst for Teal Group.

‘For its time it symbolized personal executive transportation. Besides, Carly Simon put it into a fantastic song – that cemented its place in popular culture.’

In its earliest years, however, the jet was plagued with tragedy with 23 out of 104 Learjet sold in its first three years crashing.

Sinatra’s 82-year-old mother was among one of the victims when the Learjet 24 he chartered to take her from Palm Springs to Las Vegas flew into a blizzard and crashed in January 1977.

Professional golfer Payne Stewart and four others also died in a Learjet crash in South Dakota in October 1999.

Stewart had been flying from his home in Florida to a tournament in Texas. Investigators said the plane crashed after the aircraft failed to pressurize.

Bombardier purchased the Learjet in 1990 but in recent years, production of the plane had slowed to about one a month.

Thursday’s decision was foreshadowed in 2015, when Bombardier pulled the plug on an all-new model, the Learjet 85, citing weak demand. Analysts could see the end of the line.

‘The only thing the pandemic did was accelerate a sad ending,’ Aboulafia said.

Bombardier said it will continue to support the Learjet fleet, and existing jets will fly for many more years. 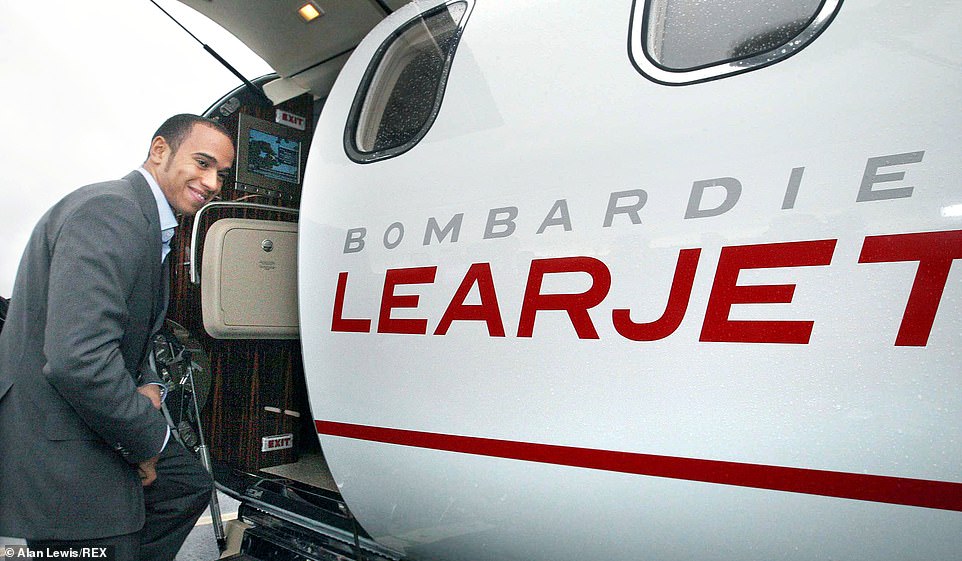 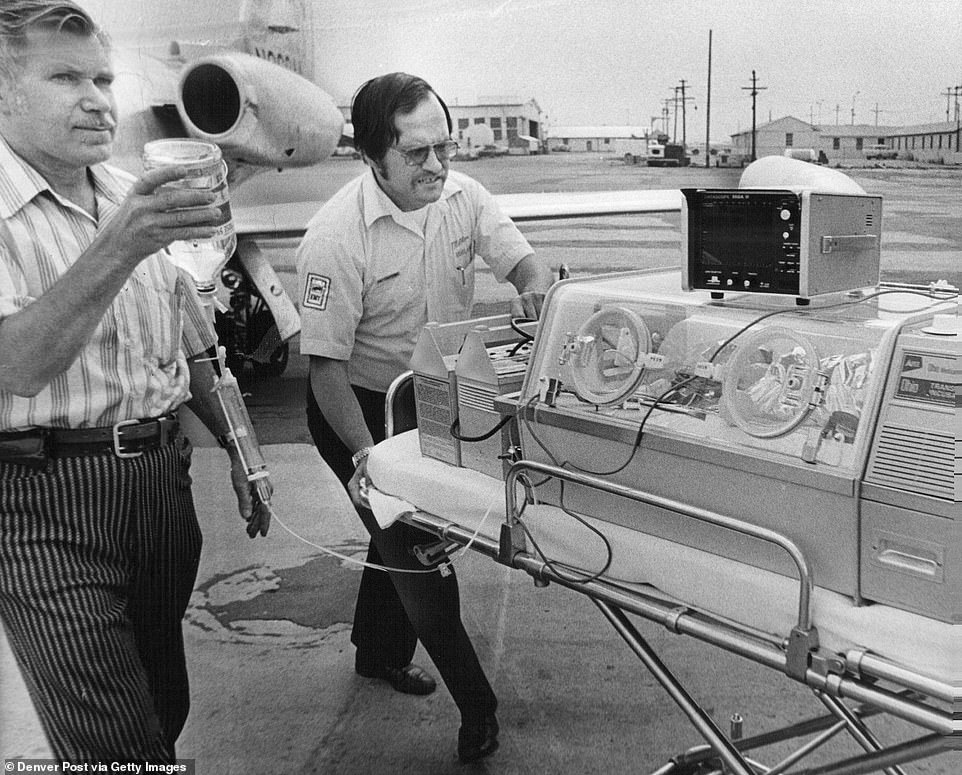 Pictured, a baby being rushed to hospital in Colorado via a Learjet flight in July 1973 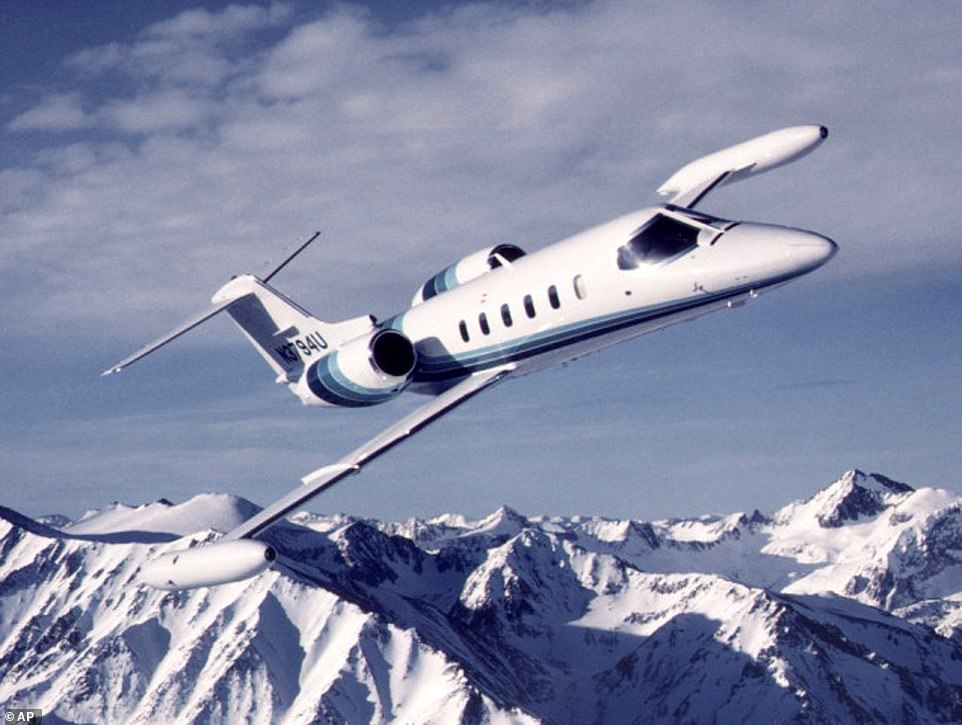 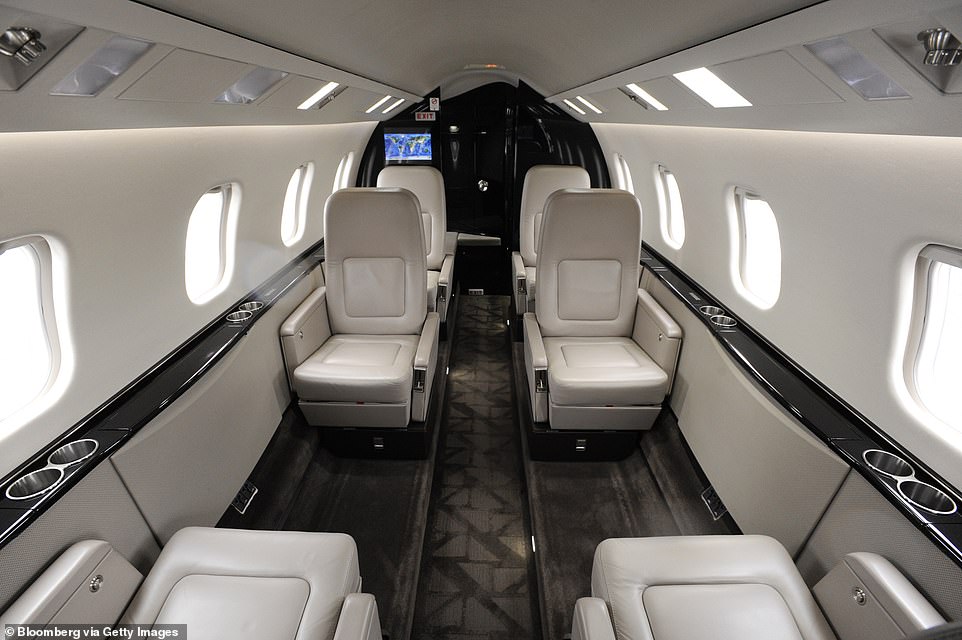 The interior seating of Learjet 60XR business jet, manufactured by Bombardier Inc. in 2011

Most of the projected job losses for Montreal-based Bombardier will occur in Canada, with about 700 planned in Quebec and 100 in Ontario.

The company said about 250 jobs will be eliminated in Wichita this year and next year, with another 100 job losses scattered across the rest of the U.S.

CEO Eric Martel said in a statement that job cuts are always difficult, ‘but these reductions are absolutely necessary for us to rebuild our company while we continue to navigate through the pandemic.’

Air travel has plummeted during the COVID-19 outbreak, causing a sharp drop in demand for new planes.

Bombardier said that ending production of the Learjet later this year will let the company focus on its more profitable Challenger and Global aircraft and accelerate the expansion of its services business.

Oprah is said to be a fan of the Global aircraft while Jay Z owns a Challenger.

Other celebrities have more recently gone for rival companies with Tom Cruise owning a Gulfstream and Drake a full-size Boeing 767 that has been committed for private use.

Despite Cruise’s own preference, it was the Learjet 23 that was used to film Top Gun’s aerial sequences. 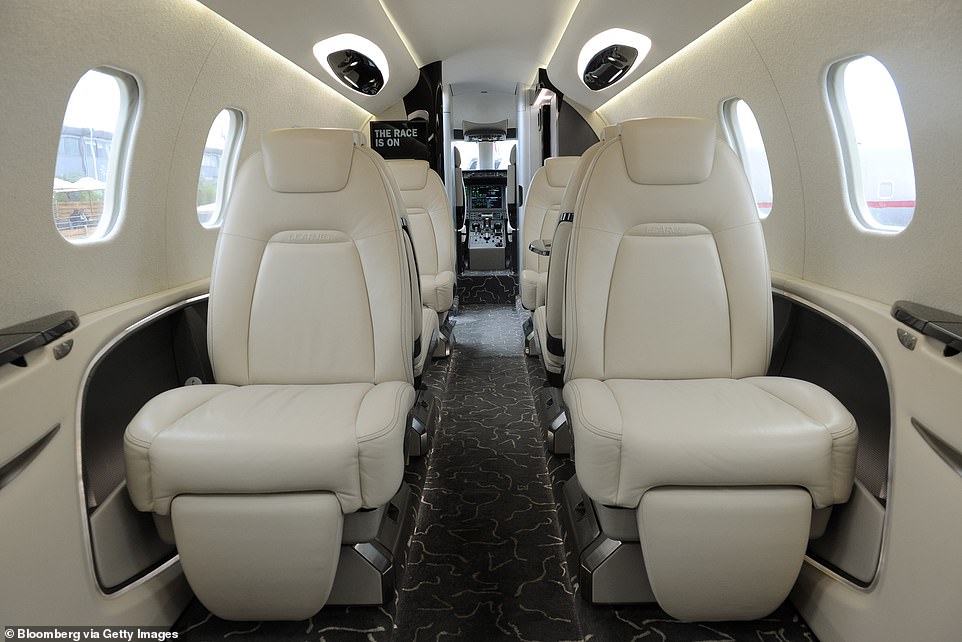 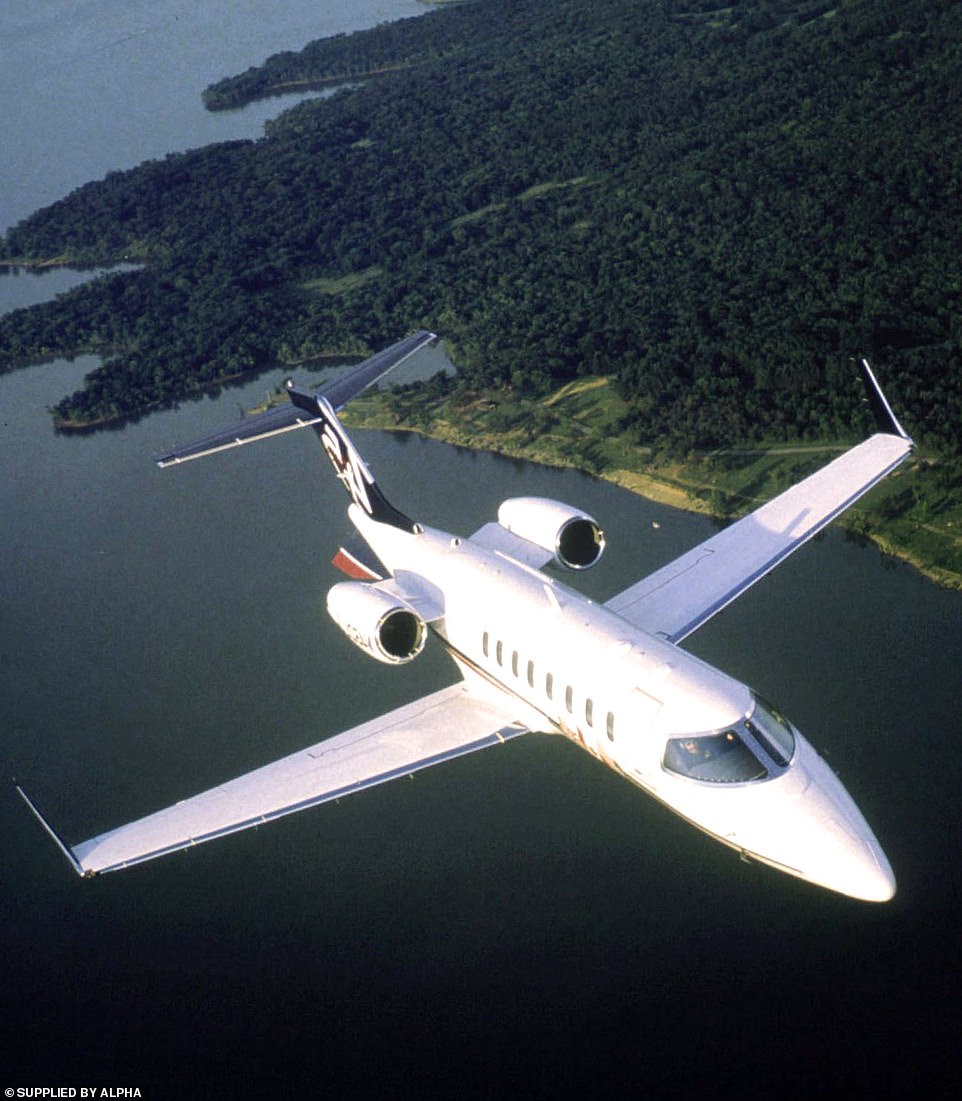 A Learjet plane in flight in undated picture. The plane will go out of production later this year

The announcement came after the company reported an adjusted loss before interest and taxes for the fourth quarter due to the coronavirus pandemic.

After flagging likely layoffs in November, Montreal-based Bombardier announced further cost-cutting efforts to generate $400 million in recurring savings by 2023 and improve earnings this year while increasing its aftermarket business.

‘We view 2021 as a transition year,’ Martel told analysts.

Bombardier, which had previously planned to break even on free cash flow in 2020, now expects to turn cash flow-positive between 2021 and 2023.

The company’s shares were down 11 percent to $0.65 (Canadian) per share in midday Toronto trading after the 10.30am announcement.