The stressful reality of Australia’s rental crisis was laid bare with nearly 100 people queueing to inspect a tiny unit that looked different from the online listing.

The queue to inspect an upstairs studio in Sydney’s Bondi Beach was ‘like lining up to get into a nightclub’.

Potential tenants say they were attracted to the unit’s close proximity to Bondi Beach, which was less than a five minute walk away.

With record low numbers of rental properties available and rents rising steeply, millions of Australians are fighting a losing battle to find a rental home.

The peak body for housing policy in NSW, Shelter NSW told Daily Mail Australia that applying for rental properties has become ‘like The Hunger Games’.

How the property looked at the inspection, after waiting in a 20 minute queue with up to 100 prospective tenants 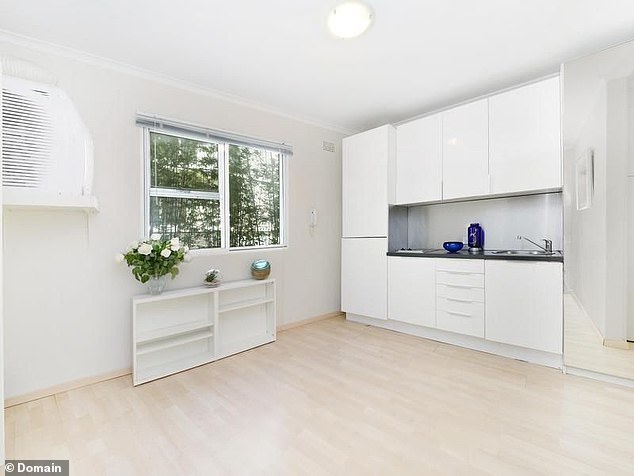 The online listing shows off an airy looking kitchen, but on inspection this area was taken up by a fold-down bed

A man who was interested in renting the Bondi unit but asked not to be named, told Daily Mail Australia the queue stretched ‘from the top of the stairs down the street’ and was turning heads with locals.

Even the agent ‘looked shocked’ at how many people came to see what was advertised as a ‘beach studio’ for a low $380 a week.

But once inside most were disappointed, even at that price.

‘The pictures online showed a bright, airy and clean apartment – but when I finally got to look after waiting 20 minutes I felt claustrophobic after five minutes,’ John told Daily Mail Australia.

‘I was shocked at how different it looked to what was advertised online.’

‘The unit barely fit the double bed, with the kitchen approximately a metre away,’ John said.

The bathroom at the address appeared to look different to how it was photographed in the listing, John said.

Online listings are understandably obliged to show a property in its best light. 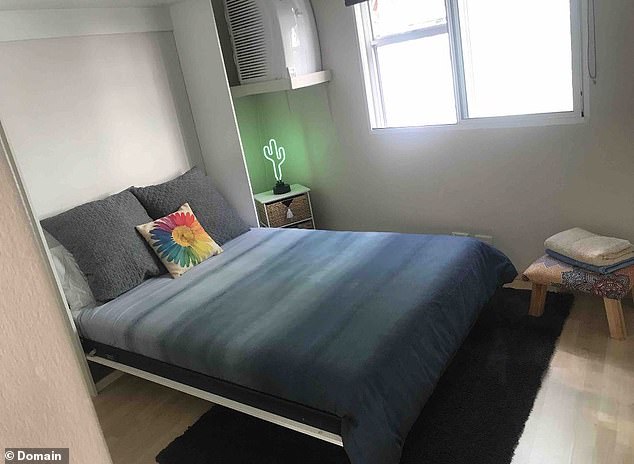 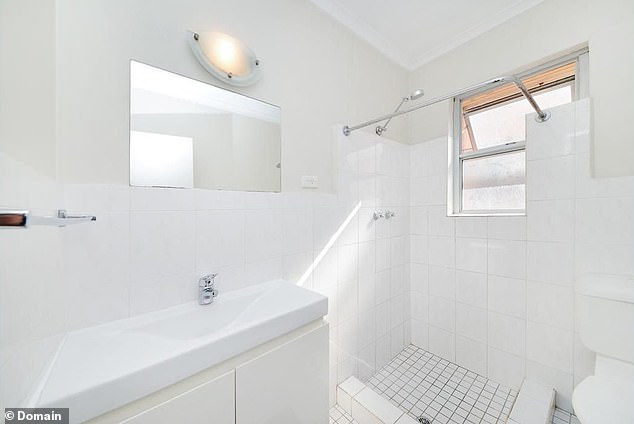 The bathroom as it appeared in the online ad for the the studio at 68 Gould Street, Bondi Beach 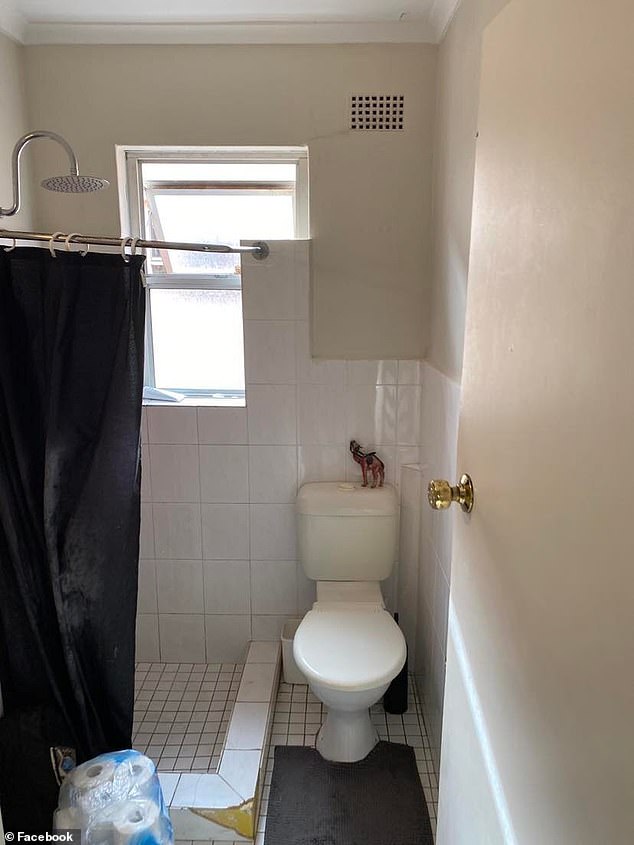 The actual bathroom  looked different from the online photos

The NSW Tenants Union told Daily Mail Australia there’s not much people can do when properties look different in person from the online ads.

‘They know their ability to lock in housing might depend on [putting up with] it.’

It’s an experience played out hundreds – if not thousands – of times every weekend across Australia.

While the difference between agent’s online photos and the in-person reality isn’t new, the current market means trying to get a property is as difficult as its ever been for renters across the country.

Nationally only 0.9 per cent of rental properties are available, while for Sydney the figure is at a record low 1.3 per cent.

That is almost half of the level of July last year, 2.4 per cent.

In Melbourne that rental vacancy rate is 1.4 per cent, while the situation is even worse in Brisbane and Hobart.

In Brisbane only 0.7 per cent of homes are available for rent, while it’s 0.5 per cent.

The cost of renting is arguably an even bigger factor, especially with prices for basics like electricity, petrol and groceries increasing steeply in 2022.

While national property values dropped two per cent in the three months to July, rents went up 9.8 per cent over the year to July.

Cathy Callaghan, of ShelterNSW expects a focus on renters to become an issue in the upcoming NSW election on March 25, 2023.

She said governments need to recognise that renting is no longer ‘a phase’ that people go through.

‘Many people now rent, and a lot of them will rent for life,’ she said.

‘Over a third of households rent in NSW. 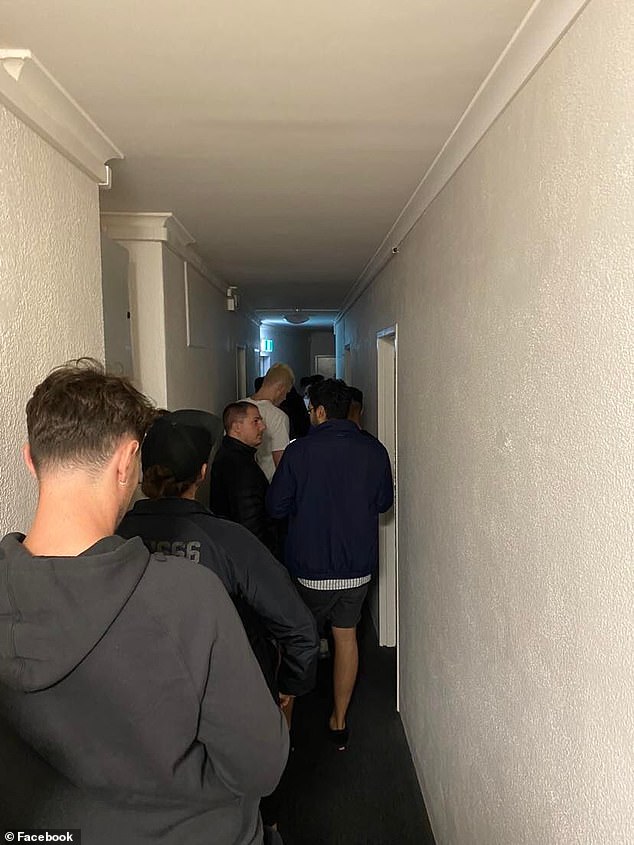 The queue to inspect an upstairs studio for 68 Gould Street, Bondi Beach, with each person waiting up to 20 minutes to get inside, was ‘like lining up to get into a nightclub’ 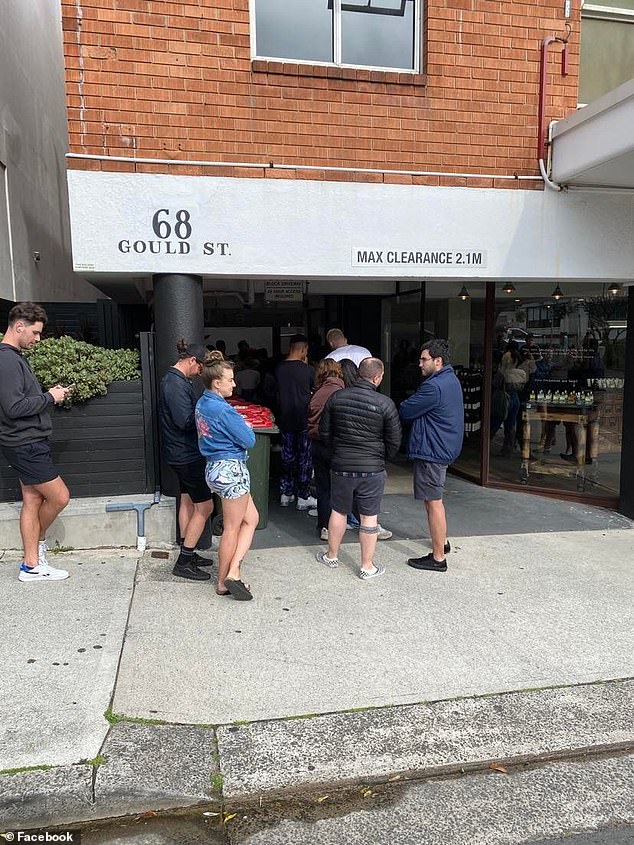 The peak body for housing policy in NSW, Shelter NSW told Daily Mail Australia that applying for rental properties has become ‘like The Hunger Games’

‘Renting ought to be a reasonable alternative to homeownership – in terms of affordability and security.

‘Instead we’re seeing the hunger games being played out – with unfair evictions, price gouging and highly stressful application processes’.

‘If governments started to see housing as an essential service then they would be stepping in and regulating the rental housing market when the market fails,’ Ms Mowbray said.

‘This example is just another example of how the private rental market is currently failing renters in NSW.’

ShelterNSW called on the NSW government to increase the percentage of so-called ‘social housing’ options (public or community-run housing stock capped at around 30 per cent of income) to over five per cent of the total housing stock.

The availability of affordable rental stock has been in steady decline for the last decade in NSW.

What can renters when photos on ads don’t match the property?

The NSW Tenants’ Union said people who need a home are in no position to complain about the ‘bad behaviour’ of agents and landlords.

‘This [behaviour] can look like photos of the property that just don’t match up with the listing, as well some agents – especially where the market is tight – encouraging renters to outbid one another to secure the housing.

‘While [it is] unprofessional, and in some cases unlawful and a very clear breach of an agent’s code of conduct, renters are not in much of a position to complain.

‘They know their ability to lock in housing might depend on it.’