They roamed the Earth during the last Ice Age, dominating an area that stretched from Europe to South Korea before mysteriously going extinct 10,000 years ago.

It’s thought that over-hunting by early humans may have contributed to the decline of the woolly rhino, along with disease and the changing climate – but now, researchers may have uncovered new clues on their downfall.

A study on neck vertebrae from the extinct species and modern rhinos has revealed evidence of a rare condition in the Pleistocene-era bones, suggesting abnormalities from inbreeding and difficult pregnancy may have played a role in their demise.

A new study suggests a ‘vulnerable condition,’ revealed by the presence of a neck rib, may have contributed to the woolly rhino’s downfall. While the rib may not cause much harm on its own, the experts say it’s often linked to inbreeding and harsh conditions during pregnancy

The study, led by researchers from the Naturalis Biodiversity Center in Leiden, Netherlands examined bones from American and European museums to compare the extinct and living species.

In doing this, they discovered the presence of a ‘cervical’ (neck) rib in many rhinos from the North Sea.

But, the modern rhinos did not have this feature.

According to the researchers, this suggests the extinct beasts may have been afflicted with a ‘vulnerable condition.’

While the rib may not cause much harm on its own, the experts say, in modern animals, it’s often linked to inbreeding and pregnancies that occur under harsh environmental conditions.

The ‘neck rib’ has been seen in previous research on late-Pleistocene creatures, as well, where Frietson Galis, one of the authors on the new study, noted a high percentage of the feature in the extinct woolly mammoth. 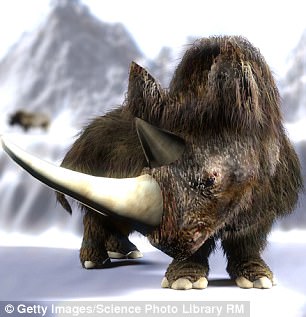 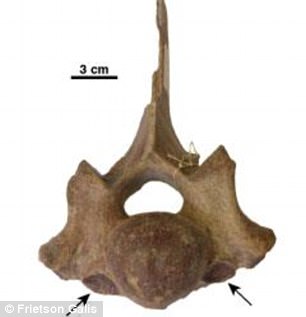 A study on neck vertebrae from the extinct species (illustrated left) and modern rhinos has revealed evidence of a rare condition in the Pleistocene-era bones. They found many had a ‘neck rib’ (right)

‘This aroused our curiosity to also check the woolly rhino, a species that, like the woolly mammoth lived during the late Pleistocene and similarly died out,’ said Alexandra van der Geer, one of the authors of the study.

‘The woolly rhino bones were all dredged from the North Sea and river deltas in the Netherlands.

‘We knew these were just about the last rhinos living there, so we suspected something could be wrong here as well. 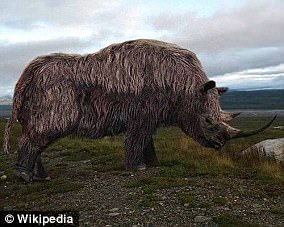 The woolly rhinoceros is an extinct species of rhinoceros that was common throughout Europe and northern Asia during the Pleistocene epoch and survived the last glacial period.

The last of the species is thought to have died out around 10,000 years ago.

In the Pleistocene epoch, the woolly rhino roamed across Europe and Asia from Scotland and Spain in the west, to South Korea in the east.

It was well adapted to its environment, with stocky limbs and a thick woolly fleece to suit the icy tundra.

Previous studies using DNA from the ancient creatures have found that its closest modern relative is the Sumatran rhino.

Based on skeletons and cave paintings, scientists believe that adult woolly rhinos were up to 13ft (4metres) long and weighed as much as 4,400lbs (2,000kg).

The two horns on the skull were made of keratin – the longest being 24 inches (61cm) – and the woolly rhinoceros used them for defensive purposes and to attract mates, but spent most of its time grazing on grasses.

The reason for their extinction around 10,000 years ago is not fully understood, but like woolly mammoths, they may have been over-hunted by early man and affected by the receding Ice Age and the spread of disease.

‘Our work now shows that there was indeed a problem in the woolly rhino population.’

And, the western black rhinoceros has totally gone extinct.

As the modern bones used in the study were collected at least five decades ago, the researchers say the new insight could help to predict risks among populations before it’s too late.

According to Galis, ‘Our study suggests that monitoring the health of the vertebrae in rhinos has the potential to timely detect developmental errors that indicate the level of extinction risk.’