But many descended into violence as thugs shot each other with missiles in London, a vet got trapped in her practice when a gang shot fireworks at police in Holloway and pyrotechnics were sent out of a car in Birmingham.

Meanwhile yobs pelted police and firefighters with bottles after an illegal rave was broken up early in the night in Greenock, Scotland.

It comes after people were warned about potentially illegal fireworks by the industry’s biggest trade body as it revealed a boom in sales had been fuelled by Covid restriction curbs. 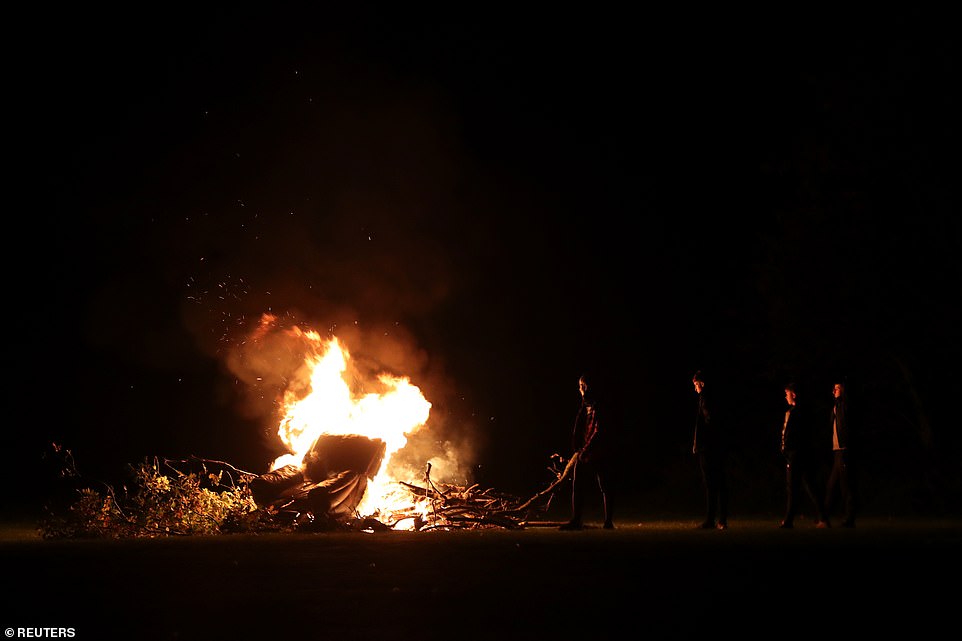 Four people tend to a small bonfire in Ouston, Durham County, on a cold night in the north of England on Thursday

Shocking footage shows two groups of youths shooting fireworks at each other on a street in Stamford Hill, in north London.

One man was seen raising his arms shouting ‘what, what, what’ as a member of the public ran for cover with his dry cleaning.

Elsewhere in Hackney a firework was launched in the street outside a Sainsbury’s as a group of youths fled before police arrived.

Video shows a large group of men firing the missile then running towards the superstore and past it and the cameraman as officers gave chase.

A veterinary nurse claimed Holloway had turned into a ‘war zone’ as yobs blasted fireworks at a Met police car in a vicious shootout.

The woman, who has not been named, posted a clip of police reversing as she and her colleague were stuck in RSPCA Harmsworth Memorial Animal Hospital.

Another horrifying video showed a hooligan shooting fireworks out of a car as it drove down a busy road in Birmingham.

The thugs sped past traffic while sending sparks across the A45 towards the Platinum Executive Travel building in the Yardley area of the city. 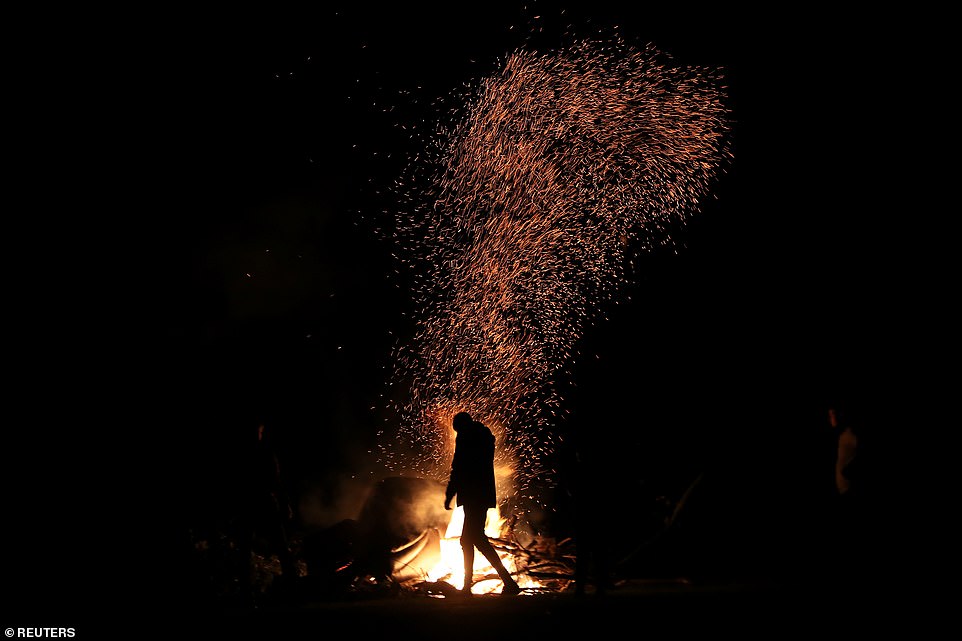 A person is seen in silhouette in front of a bonfire, in Ouston, Durham County, in the north of England on a cold November night 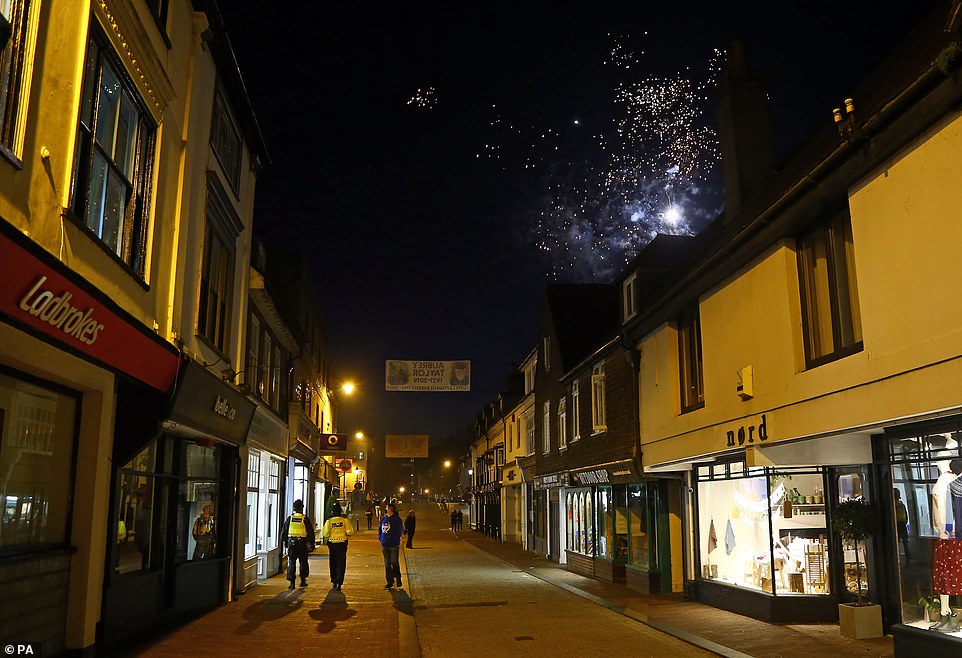 A firework explodes above the empty High Street in Lewes in East Sussex, which would normally be packed with bonfire societies parading through the town, after the main bonfire night parades were cancelled due to the Covid-19 pandemic and following the start of a four week national lockdown for England 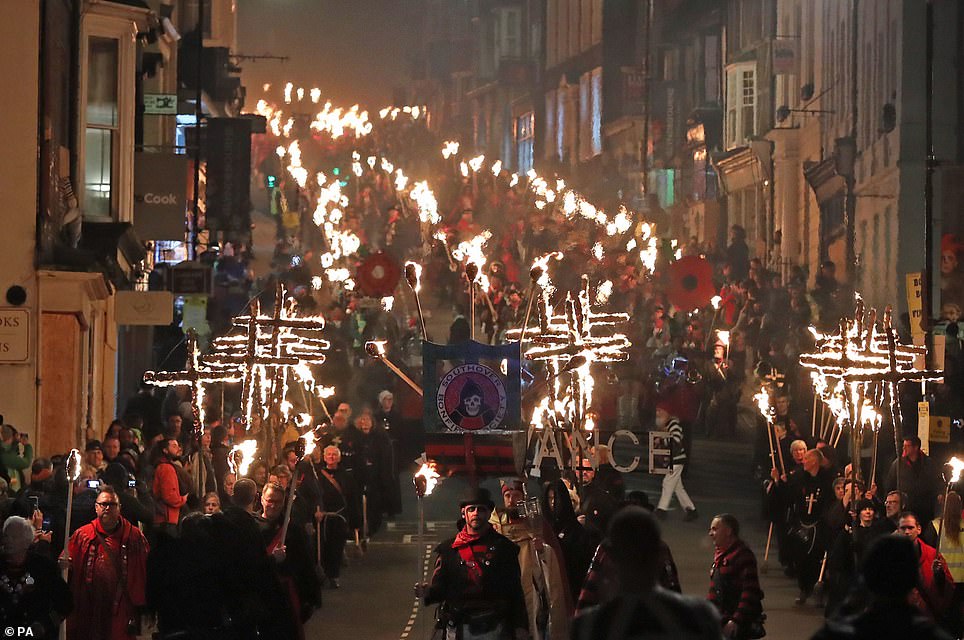 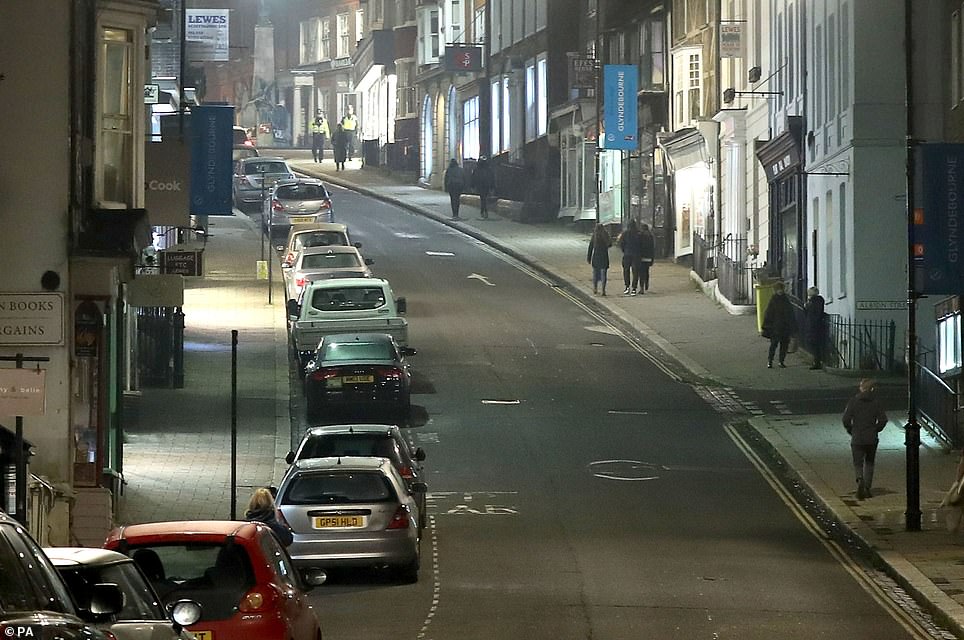 Left: last year – Participants parading through the town of Lewes in East Sussex. Right: this year – the town remained empty

In Scotland police swooped on a huge illegal rave in Greenock as crowds gathered for an illegal fireworks and bonfire display.

The mob turned rowdy as officers approached and they reportedly pelted servicemen and firewmen with bottles during the night.

Video shows a DJ blaring out music on decks for a street party as fireworks and a large bonfire light up the night sky behind him.

St Andrew’s Church, which is near the site, posted on social media saying one of their members had tried to confront the group.

It posted: ‘Hundreds have gathered for fireworks and are using the church wall as a public toilet. Father Danny has tried to keep them out but has just been advised by the police, for his own safety, to stay inside.

‘Both fire service and police have had bottles thrown at them.’ There was also claims one person had been attacked with a bottle.

A Scottish Fire and Rescue Service spokesman said: ‘We were alerted at 7.47pm on Thursday, November 5 to reports of a bonfire in Greenock.

‘Operations Control mobilised one appliance to Auchmead Road, where firefighters requested the assistance of their police partners after encountering antisocial behaviour. There were no firefighter injuries.’

While the latest Covid-19 measures coming into force for England on November 5 have driven sales for some UK firms, curbs on traditional big public displays have left many seasoned show operators facing a bleak 12 months.

Covid restrictions mean many spectacular events have been cancelled, with some skilled pyrotechnics show-runners reporting a 90 per cent drop in turnover.

Steve Raper, chairman of the British Fireworks Association (BFA) which represents retailers, said those same curbs had driven ‘a massive spike in sales’ as part of a shift to ‘back-garden displays’.

He also sounded a health and safety warning to people turning to online retailers to get fireworks, which might even be illegal under the UK’s tight explosives regulations.

The rise in sales started as soon as the UK’s autumn fireworks season began on October 15 and the relaxation of sales licensing rules, he added.

Mr Raper said there had been a ‘robust start’ to trade, with people ‘letting their hair down’ and keen to mark Bonfire Night and Diwali, the Indian festival of lights on November 14. 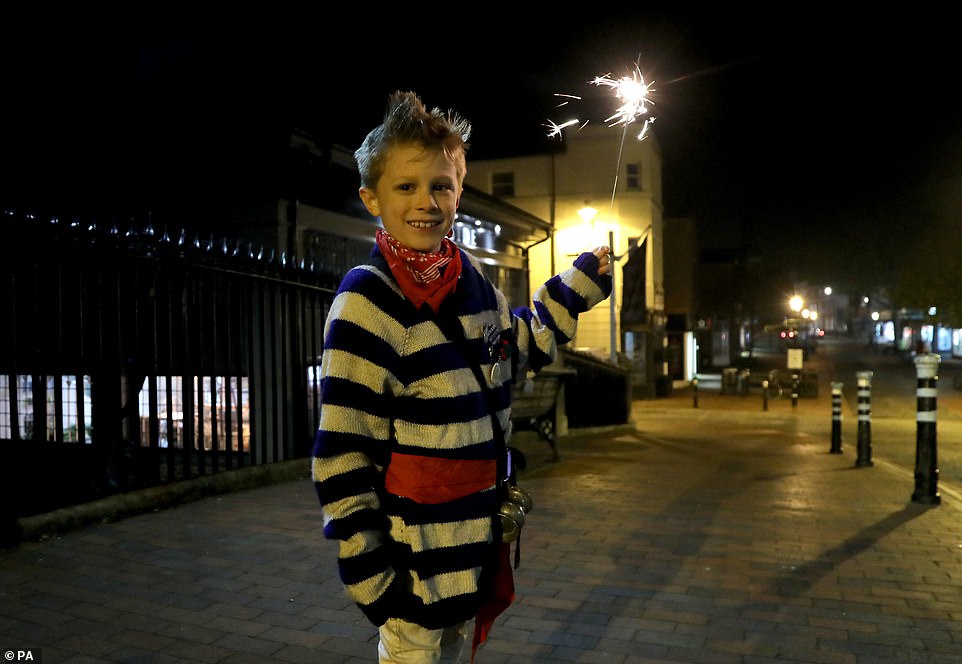 A young member of the Lewes Borough Bonfire Society in East Sussex, marks bonfire night with a sparkler in the empty High Street 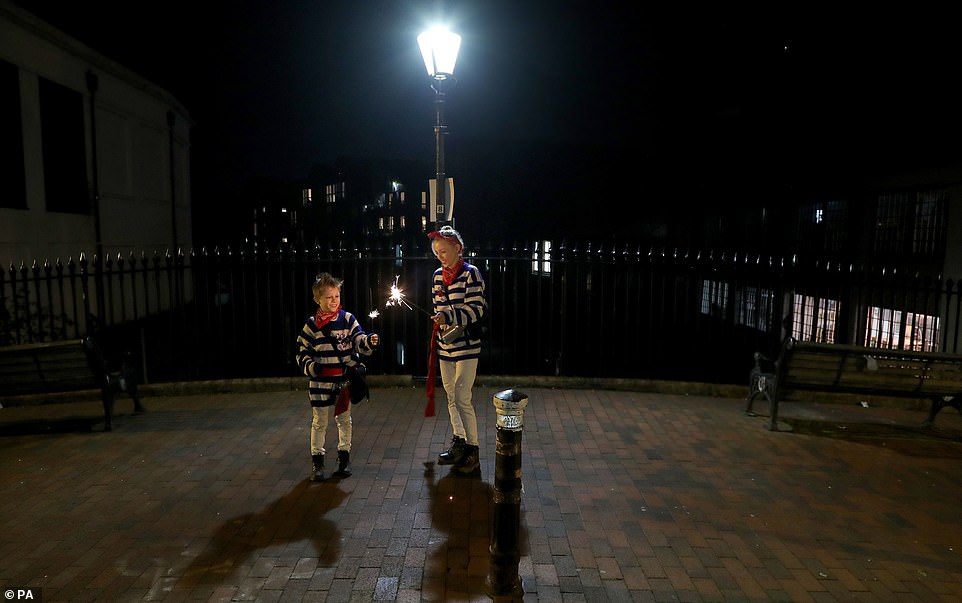 Members of the Lewes Borough Bonfire Society in East Sussex, mark bonfire night with a sparkler in the empty High Street

A suggestion by Manchester’s regional mayor Andy Burnham that fireworks could be banned as part of a deal with Government to remain under Tier 2 controls sparked the surge, Mr Raper said.

‘Our phones lit up,’ he said. ‘People in Manchester were calling up immediately saying ”we want fireworks”. It was the toilet-roll effect, people were panic-buying.’

Then the announcement of Wales’s two-week lockdown had a similar effect for retailers there.

Mr Raper knew of two stores in Cardiff and Swansea who had a ‘600 per cent – 980 per cent increase’ in fireworks sales, based on last year’s numbers. He said: ‘We’ve been driven by a massive spike in sales.’ 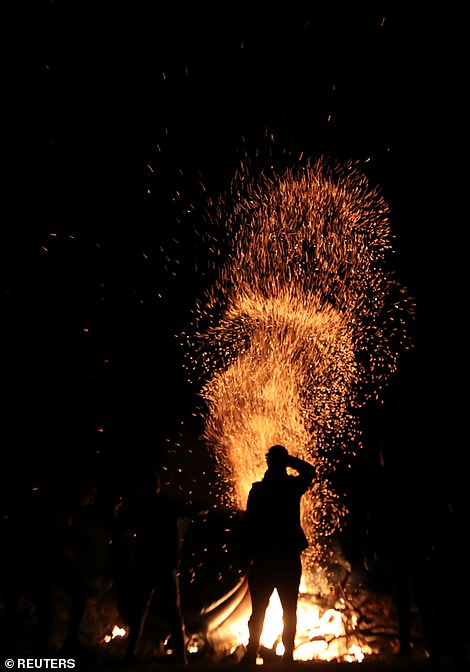 A person is seen in silhouette in front of a bonfire, in Ouston, Durham County

However, independent smaller-scale retailers, such as those who run pop-up shops just for the fireworks sales period which runs from October 15 to November 10, as well as selected dates around New Year, Diwali and Chinese New Year, were now suffering as they were deemed non-essential under the new lockdown guidance.

He said an unforeseen impact on the industry was customers who bought illegal fireworks ‘being shipped in from places like Poland and the Czech Republic’.

Mr Raper said many of these illicit fireworks were filling the gaps in demand, but customers were often unaware they could be in breach of the UK’s extremely tight regulations on ordnance.

‘Many do not conform to noise standards, and the instructions aren’t in English so you won’t know fuse timings, for example, and that could cause a spike in injuries,’ Mr Raper said.

He also branded recent incidents of anti-social behaviour with fireworks, such as those seen in the West Midlands where cars and police officers have been targeted, as ‘abhorrent’.

‘Many of the fireworks being used in those situations will be illegal, brought on the internet.

‘Because of Covid and lockdown, a lot of people have moved from buying fireworks over the counter at a trusted retailer to getting them online.’

Mr Raper said the problem was not new, citing a 2019 example where a flight shipment of 20kgs of illegal fireworks was uncovered at an unnamed airport in England during a routine customs check.

He added it was critical people sourced fireworks from established UK retailers and followed the BFA’s online fireworks code of conduct to ensure safe handling.

Tom Smith, the secretary of the British Pyrotechnists’ Association (BPA), which represents the majority of the major display companies, said only 5 per cent of the planned big fireworks shows had taken place this year.

‘If it went on until November next year, I can see 80 per cent of display companies giving up,’ he said. ‘The game we’re in, realistically it will be one of the last things to return to normality.’

Chris Pearce, managing director Jubilee Fireworks based in Kingswinford, West Midlands, said: ‘It’s been a disastrous year to be quite honest. We anticipate a fall in turnover of 80 per cent – 90 per cent.

‘We lost a majority of our shows and the summer was equally bad.’ The firm had not anticipated the timing of the second wave, adding ‘the November season is pretty well dead for us’.

He said the firm, which makes 80 per cent of its business by putting on professional displays, had done five this year compared to 200 in a normal year.

Mr Pearce added it would ‘require some very careful management’ of finances to survive the next year, adding there were ‘bound to be casualties’ in the trade.