Bonfire of the billionaires: £267bn wiped off net worth of world’s richest

Bonfire of the billionaires: Year of turmoil wipes £267bn off net worth of world’s wealthiest people

Some of the world’s richest people have seen their wealth fall as soaring inflation, Russia’s invasion of Ukraine and spiking interest rates sent global stock markets into meltdown.

By far the biggest loser has been Elon Musk, who in 2022 saw his net worth plunge by £115billion to £110billion, according to the Bloomberg Billionaires Index.

Musk’s wealth was hit mainly by a sharp drop in the value of his 13.4 per cent stake in electric car maker Tesla, which has fallen 68 per cent since the start of 2022.

The biggest loser of 2022 is Elon Musk, who saw his net worth plunge by £115bn to £110bn, according to Bloomberg Billionaires Index

The decline has been mostly attributed to Musk’s antics at social media website Twitter, which he bought for £36billion in October following a drawn-out legal battle after he tried to walk away from the purchase.

The hit also knocked him off his perch as the world’s richest person.

He has been replaced in the top spot by Bernard Arnault, the head of French luxury conglomerate LVMH, the owner of brands including Louis Vuitton and Moet, who has a net worth of £135billion.

Second to Musk in terms of losses was Amazon boss Jeff Bezos, who had £73billion wiped off his net worth as the value of shares in the e-commerce giant dropped 51 per cent.

Another big loser was Changpeng Zhao, the chief executive of the cryptocurrency exchange Binance whose net worth fell £70billion to £9.6billion following a meltdown in crypto markets.

The sector saw a sharp sell-off when fears for the global economy and the end of cheap money caused investors to flee from highly speculative assets such as bitcoin and other digital currencies, which had boomed in popularity during the pandemic thanks to a cocktail of celebrity endorsements and savings which had been built up during lockdown.

Things went from bad to worse last month when FTX, a rival crypto exchange to Binance, collapsed into bankruptcy after a surge in withdrawals it was unable to fulfil. 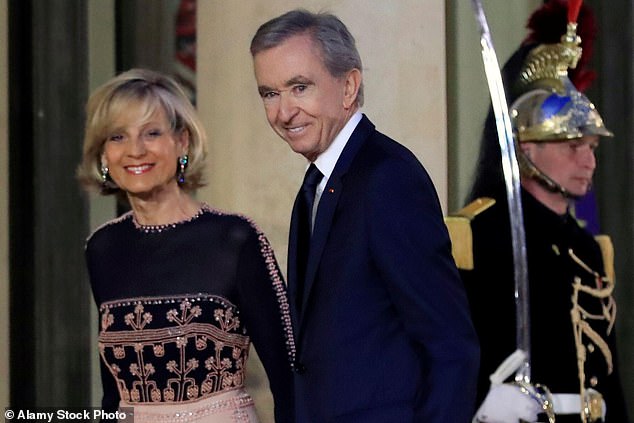 Top spot: Bernard Arnault (pictured with wife Helene) the head of French luxury conglomerate LVMH, is now the World’s richest man with a net worth of £135bn

The implosion marked a spectacular fall from grace for FTX founder Sam Bankman-Fried, who saw most of his £21billion in personal wealth disappear and is now facing allegations of fraud.

Other tech titans clocked up huge losses as concerns about the growth prospects for the sector sparked a stock market bloodbath, hitting the value of their stakes in various firms.

Mark Zuckerberg, the head of Facebook’s owner Meta, has suffered a £68billion loss to his fortune. Meanwhile, Google founder Larry Page lost £39billion and his co-founder Sergey Brin has taken a £38billion hit as shares in the search engine’s parent Alphabet have crashed 41 per cent.

Microsoft founder Bill Gates has lost £24billion after shares in the computing giant tanked 30 per cent this year, while investing legend Warren Buffett is down £2.7billion.

The world’s ten wealthiest people, who include Musk, Gates, Bezos and Buffett, suffered a combined net loss of £267billion.

While most of the top-ten fat cats have seen declines in their fortunes, one notable exception is the Indian industrial tycoon Gautam Adani.

His net worth actually jumped £35billion this year, making him the world’s third-richest person.