Three more boats of migrants have been stopped off the Dover coast overnight, bringing the number of people trying to reach Britain above 800.

The second boat that was intercepted had 11 migrants on, it is not yet known how many were on the other two.

It comes after two separate groups of 21 migrants have been intercepted after attempting to reach Britain yesterday.

The second boat contained nine adult men and one boy and it was taken back to Dover where the migrants were interviewed. They presented themselves as Iranian, Afghan and Nigerian nationals.

The Home Office said it was ‘currently dealing with a number of small boat incidents in the Channel.’

So far this year, some 793 suspected migrants have been caught by British officials and since the start of November, more than 1,050 have crossed the Dover Strait – the busiest shipping lane in the world.

This morning the first boat was towed into the Kent town where the migrants -thought to be mostly middle aged men in their 40s and 50s – were intercepted and questioned by Border Force officials.

Two migrants in less than a month are now feared dead after trying to swim the Channel to the UK. 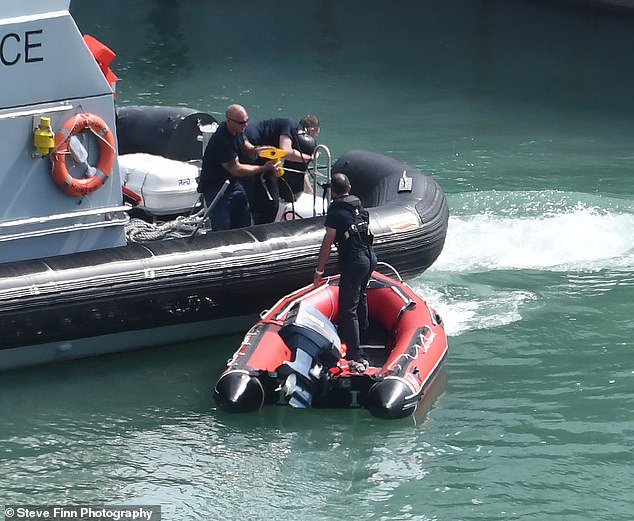 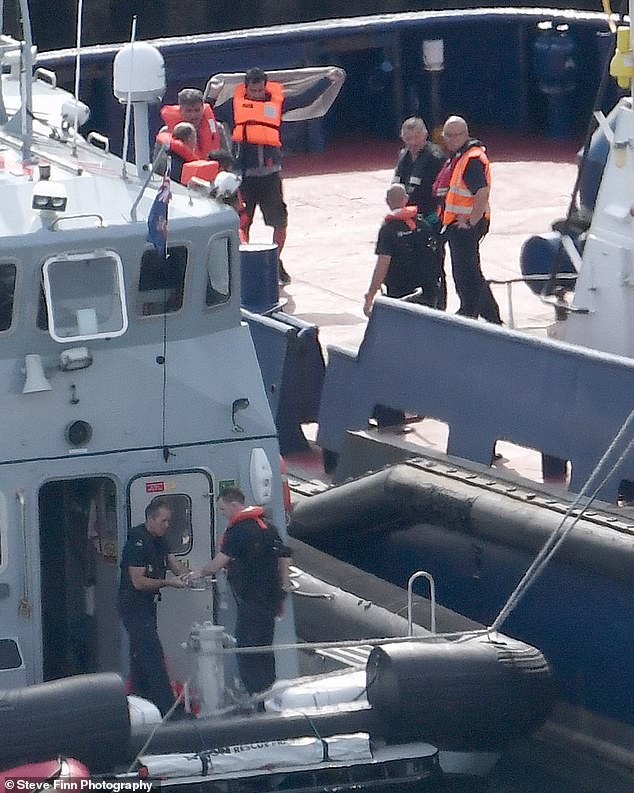 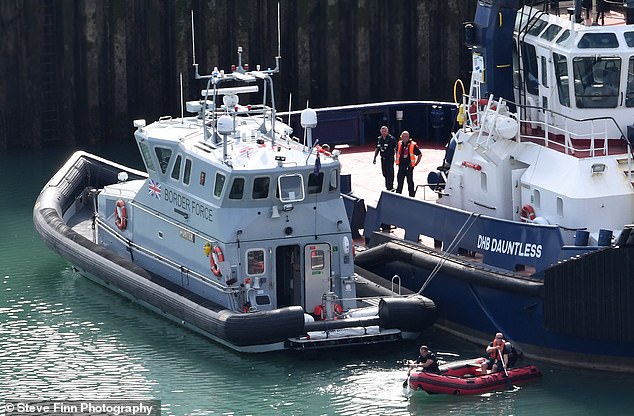 Dozens of officials were at the scene in Dover yesterday 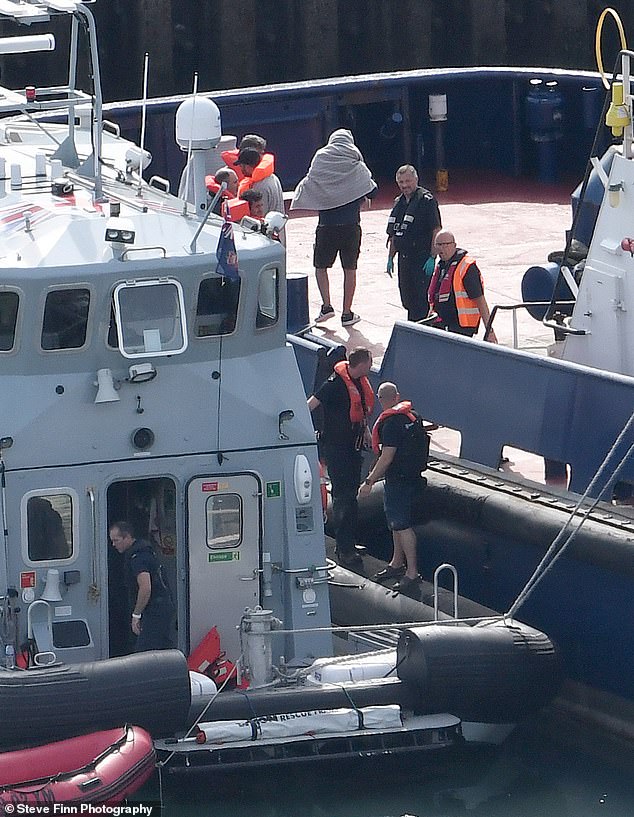 On August 9, a woman fell from a dinghy and is presumed dead when she and other migrants were in the boat around 20 miles off Ramsgate.

The Iranian woman who is missing and presumed drowned was named by the Mail on Sunday as Mitra Mehrad, 31, who was studying for a PhD in psychology.

Ms Mehrad arrived in Dunkirk on Tuesday, August 6, and was registered at the Espace Jeune du Moulin, a gymnasium in the suburb of Grande-Synthe that has been converted into a sprawling migrant camp.

On the same day more than 60 migrants were rescued in the English Channel – including two people in kayak – as they made desperate attempts to reach the UK in five separate incidents.

They were saved on both sides of the channel as they tried to cross the 21 mile stretch of water to reach the UK.

And officials in France say a male swimmer who tried to cross on Sunday night is ‘probably’ a migrant.

A Belgian national who was sailing on a boat on Sunday told officials in France that he could see a ‘man in the water calling for help in English’, with a belt, empty plastic bottles and fortune palms 13 miles off Dunkirk.

A judicial source told the France Info news website, the man is ‘probably’ a migrant.

The sailor said: ‘He started to drift. It must have been a migrant trying to swim across the English Channel, that’s the most likely assumption.’

The search for the missing man started on Sunday evening but was stopped by the French authorities after midnight. 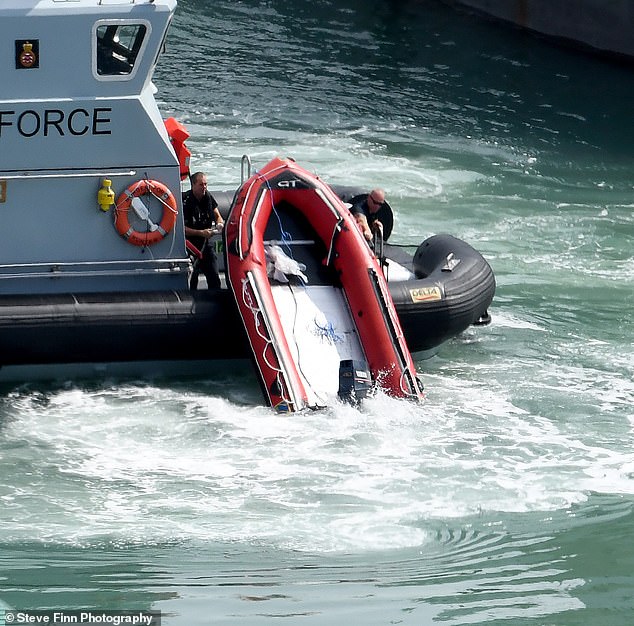 The Home Office said it was dealing with a ‘small number of boats in the channel’ today. Pictured, the second boat recovered in Dover 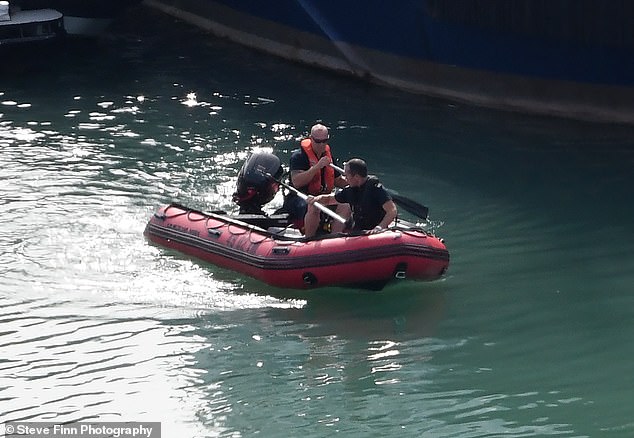 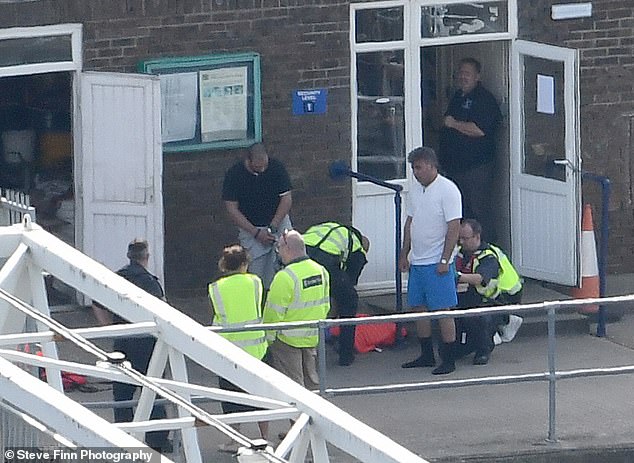 It has been reported that migrants are being forced to get into small boats and cross the Channel at gunpoint by human trafficking gangs.

A Home Office spokesman said: ‘Anyone crossing the Channel in a small boat is taking a huge risk with their life and the lives of their children.

‘Since December, two cutters have returned to UK waters from overseas operations, we have agreed a joint action plan with France and increased activity out of the Joint Coordination and Information Centre in Calais.

‘It is an established principle that those in need of protection should claim asylum in the first safe country they reach and since January more than 60 people who arrived illegally in the UK in small boats have been returned to Europe.’

A spokesman for the coastguard said: ‘HM Coastguard has been coordinating a search and rescue response to a number of incidents off Kent, working with Border Force, Kent Police and other partners.

‘We are committed to safeguarding life around the seas and coastal areas of this country.