This is the incredible moment a bored boyfriend pulls off a ‘one in a million’ trick with a pen lid.

Australian Kevin Monson was sitting next to his girlfriend Jordanne Gold when he tried the audacious stunt.

The couple, who now live in Medicine Hat, Alberta, Canada, were on the sofa as she talks across him to an unseen friend.

His girlfriend Jordanne Gold, who he lives with in Medicine Hat, Alberta, Canada, sees the trick out of the corner of her eye and laughs

An apparently bored Mr Monson flips the lid off a pink highlighter and sends it spiralling into the air, with it somehow landing perfectly back on the piece of stationary without him having to move.

His priceless reaction is one of utter shock as he tenses his hands and lets out a loud gasp.

Even Ms Gold, who had been deep in conversation beforehand, stops to appreciate her boyfriend’s incredible trick.

Her eyes dart from her friend to the top of the pen and she laughs at the achievement.

But by this point Mr Monson appears stunned by what he has done as he stares at the camera with his mouth wide open, before cutting the recording.

Mr Monson said: ‘I’ve spent a lot of time with bottle flip challenges, so I thought I would step it up!’

He added: ‘Forget the bottle flip challenge, this is the pen lid challenge.’

The bottle flip challenge was a craze that involved flipping a plastic water bottle – partially filled with liquid – to try to get it to land upright.

Mr Monson’s short clip was shared on social media and went viral, with comments flooding in from awestruck users. 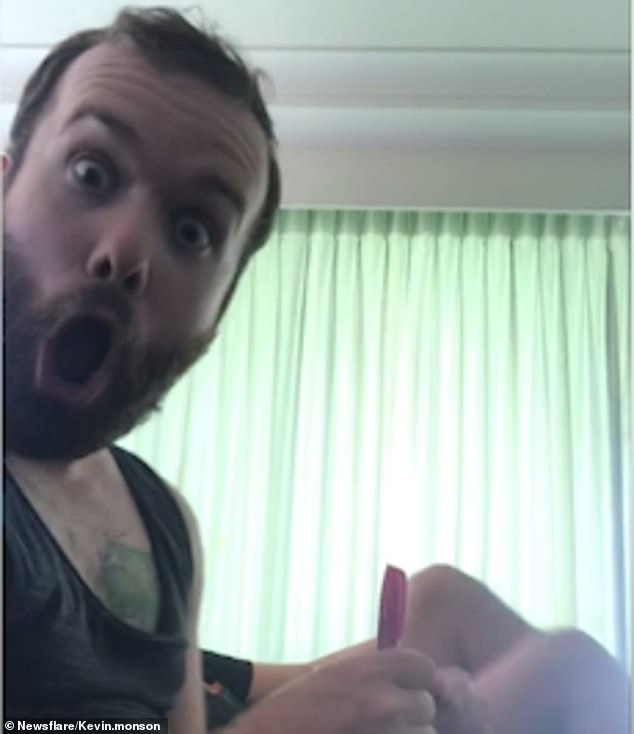 But Mr Monson’s reaction is priceless and one of utter shock as he tenses his hands and lets out a loud gasp. He looks at the camera with his mouth wide open and appears stunned by the stunt

One commented: ‘I’m booking time off work until I do this.’

Another wrote: ‘I love this man’s instant sense of achievement.’

Yet one person added: ‘How many times did he actually try before it actually landed?

‘Not a skill at all, just how many attempts until it actually goes the way you want it to go.’