As an act of self-sabotage, it is hard to beat. The now-infamous photograph of would-be PM Boris Johnson and Carrie Symonds, passed to the Press on Monday, was intended to scotch rumours that after their dramatic screaming match the couple had kissed and made up.

Today, not even Boris’s staunchest defender could say that it helped.

For the picture – apparently taken in Sussex, in an undisclosed location by an anonymous photographer – has thrown up far more questions than it has answered. And rightly so.

I can reveal that even senior sources in Boris’s camp believe the photograph was taken long before the row between Boris and Carrie in her south London flat last week.

The clues are certainly there.

Controversy: This picture of Boris Johnson and Carrie Symonds, apparently taken in Sussex by an anonymous photographer, has thrown up more questions than it has answered

Not only could any casual observer clearly see that Boris’s trademark blond mane appeared longer and more unruly than the coiffured new look he has been displaying since the first leadership hustings.

But even more damningly, the photograph bears an uncanny similarity to one released to the Press in similar circumstances (and also with no named photographer) last September.

This too featured Carrie sitting outdoors at a wooden table, surrounded by greenery, although her companion that time was an unnamed female friend.

The photograph was released days after she had been named as 54-year-old Boris’s new girlfriend, and a week after his divorce from Marina Wheeler, the mother of four of his children, had been announced.

Whatever the truth of the matter, such is the furore unleashed by the picture, I understand that his campaign is in a state of near-panic. Some of his allies are asking frank questions about the role that Symonds, 31 – a former Tory Party director of publicity – is playing in proceedings.

Despite having no official role, she is apparently helping to steer both the direction and the content of the stuttering Boris campaign, including the release of that ill-judged photograph.

In doing so she is ruffling more experienced Tory feathers. One exasperated Boris supporter complained to me last night: ‘You don’t have to tell me how many bad decisions she’s taking.’ 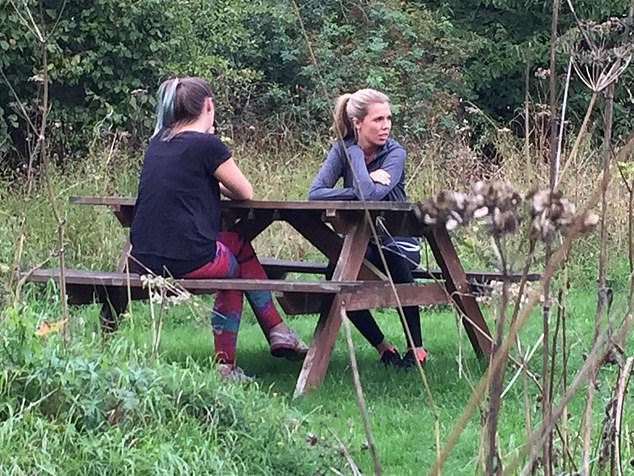 Familiar: The latest photograph bears an uncanny similarity to this photo of Carrie Symonds, released to the press in similar circumstances last September

Boris’s campaign had already begun terribly. He had been ’empty-chaired’ in a Channel 4 debate, had refused almost all media interviews, was widely said to be lacking much of his usual bonhomie, had been accused by rival Jeremy Hunt of being ‘cowardly’ and, of course, his domestic row had been splashed all over the newspapers. The photograph was meant to re-establish control.

Needless to say, it failed – and a rethink was required.

It resulted in two rare media appearances for Boris. The first was a lacklustre performance on Monday evening in an interview with BBC political editor Laura Kuenssberg. And then, yesterday morning, Boris was slated to appear for 30 minutes on Nick Ferrari’s LBC radio show.

The interview was a disaster. Ferrari asked Boris 23 times if the photograph was taken on Sunday, the day before its release, or earlier. Again and again an increasingly irritable Boris refused to answer, blustering: ‘It’s just something I don’t want to get into. Why should I?’

One Boris supporter told me: ‘If they thought going to Ferrari would be an ‘old pals’ act’, it was a big mistake. It was not a car crash for Boris: it was a multiple motorway pile-up. We should be honest and say we think the photo is weeks old. What were they thinking of?’ 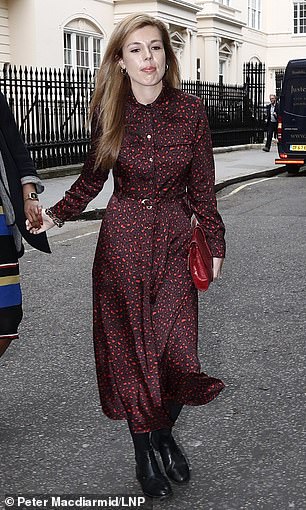 Miss Symonds, pictured in central London earlier this month, is apparently helping to steer both the direction and the content of the stuttering Boris campaign

As if this scene was not chaotic enough, I have learnt that, in an extraordinary admission for a man campaigning to be the next prime minister, Boris was barely aware of the impact the photograph had had when he arrived at the studio shortly before 9.30am as he admitted he hadn’t read any of the newspapers this week.

This succession of unforced errors has exposed serious strains in the Boris camp. I understand that at one strategy meeting last week there were about 20 men in the room and not a single woman.

One supporter told me: ‘[Both] the row and the police being called over Carrie are doing terrible damage to Boris’s standing with women voters.’ But Boris has, of course, been listening to one woman: Carrie. ‘She sees him first thing [in the morning] and last thing at night. She gets the first word and the last,’ added the same friend.

Yesterday, as a number of senior supporters complained privately that Boris’s team was not up to the job, former Tory leader Iain Duncan Smith was brought onboard to help run things.

Gavin Williamson, dramatically sacked by Theresa May last month as Defence Secretary for leaking a discussion from the National Security Council to the Press, is another senior politician on Team Boris.

Meanwhile, the campaign ‘manager’ is James Wharton, just 35, an MP for seven years until 2017 and once a junior minister. Even MPs who like Wharton say he wasn’t noted for his political nous or cunning. On Monday night, one Boris supporter rhetoricaly demanded: ‘Who is James Wharton? Why haven’t they got a genuine heavyweight running the campaign?’

In fact there is one heavyweight backing Boris – but only from a safe distance. Sir Lynton Crosby, the political guru who ran Boris’s two successful London mayoral campaigns in 2008 and 2012, is an unofficial adviser.

Crosby was unavailable for comment yesterday. But Boris’s friends insist that he is on the telephone to Boris most days and urged him to try to draw a line under the police incident.

It was suggested that Boris could refer to the police incident in a speech or perhaps make a short statement. But Boris torpedoed both ideas.

‘By insisting that he never talks about his private life he has allowed the police story to derail the entire first week of the campaign,’ the Boris supporter added.

‘We piously say we can’t talk about Boris and Carrie’s relationship, then an old photo is put out and dressed up as new. To call it flawed thinking is an understatement.’

With the postal ballot papers going out to the 160,000 Tory members who will decide on the party’s leader – and our prime minister – in less than two weeks, Tory MPs are urging Boris to take a much closer interest in his campaign.

The supporter said: ‘We joked at the start of this final stage that this is Boris’s to lose. I hope that joke isn’t about to come true.’