Boris Johnson makes himself at home at the Elysee Palace! Critics accuse PM of disrespecting the French by putting his feet on the furniture – but video shows Emmanuel Macron INVITED him to for a joke

Boris-bashers on Twitter have egg on their faces this evening after it emerged the PM put his feet on the furniture in the Elysee Palace at the invitation of the French President.

Social media users labelled the Prime Minister a ‘buffoon’, ’embarrassing’, ‘arrogant’, and ‘a t**t’ after a picture emerged of him resting the sole of his right foot on an occasional table during his meeting in Paris this lunchtime.

Among those to splutter their indignation online were the arch-Remainer editor of politics.co.uk, Ian Dunt, who last month greeted Johnson’s elevation to the premiership by posting: ‘Right lads, let’s f*** him up.’

Today Mr Dunt posted the photo and wrote: ‘This is one of those distilled culture war moments isn’t it. Anyone with civility thinks: No, you unspeakable buffoon. Anyone without thinks: Yeah, sticking it to the frogs.’ 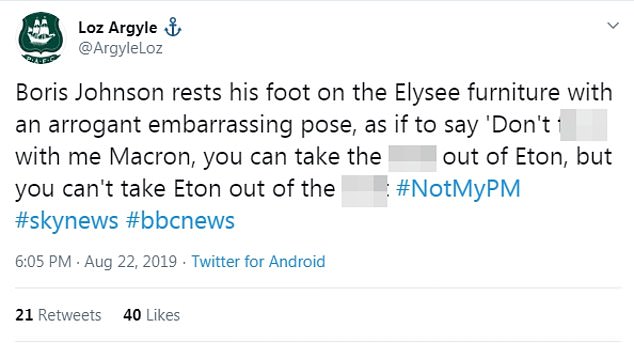 Another Twitter user said the photo made it ’embarrassing to hold the same passport as this PM’ while a third said ‘You can take the t**t out of Eton, but you can’t take Eton out of the t**t.’

However video of the event shows the French President laughing and joking with Mr Johnson immediately before the picture was taken.

In the clip Mr Macron can be seen suggesting the table could be used as a footstool should Mr Johnson wish to put his feet up.

The Frenchman even points to Johnson’s shoe and taps the table, before the Prime Minister responds by doing as invited for a moment, then waving to the press photographers in attendance.

Responding to the video Mr Dunt posted on Twitter: ‘Ah, looks rather different from the video. STAND DOWN GUYS we’re not going to war after all.’

The relaxed atmosphere between the pair at the Palace was in contrast to comments overnight from the French leader, who had suggested a no-deal Brexit could come at the cost of ‘a historic vassalisation of Britain’.

The laid-back tone also echoes Mr Macron’s meeting with Donald Trump in November, during which he was seen squeezing the US President’s thigh.

Mr Macron and Mr Johnson both tweeted warm words following the discussions, held as the PM attempts to re-open talks on the UK-EU Withdrawal Agreement.

Shortly after the meeting, the PM tweeted a picture of himself speaking with Mr Macron, adding: ‘Today I met President @EmmanuelMacron in Paris. Let’s get Brexit done, sensibly and pragmatically and in the interests of both sides.

‘Let’s get on with deepening and intensifying the friendship and the partnership between our nations.’

The President responded in kind, posting: ‘The relationship between the United Kingdom and France is, in my eyes, essential and unalterable.

‘@BorisJohnson, I see in your choice to come to Paris the need to maintain this privileged relationship. Let’s work together!’