Boris Johnson tonight admitted he played a role in Sir Kim Darroch’s resignation as British ambassador – because he failed to defend him from Donald Trump’s onslaught.

The Tory front runner said he knew Sir Kim’s decision to fall on his sword was partly down to his lukewarm support in an ITV debate this week.

But Mr Johnson insisted his position had been ‘misrepresented’ to Sir Kim and the veteran diplomat had not seen the programme personally.

Mr Johnson has been accused of throwing the UK’s ambassador to Washington ‘under the bus’ when leaked memos triggered an extraordinary public row with Mr Trump.

After it emerged the ambassador had described him as ‘inept’ in secret assessments for ministers, the US president branded Sir Kim a ‘pompous fool’ and banned him from the White House.

Theresa May, Mr Hunt and the Cabinet signalled their full support for Sir Kim, saying he was only doing his job of providing an honest view, and had not been reflecting the government’s position.

But Sir Kim then quit the day after the ITV debate, when Mr Johnson refused to say that as PM he would keep him on in Washington until the end of his term early next year.

Mr Johnson said tonight that he had spoken to Sir Kim after his departure was announced, and regretted his decision.

‘He said what somebody had relayed to him had certainly been a factor in his decision,’ Mr Johnson said.

‘Unfortunately what I said in that TV debate was misrepresented to Kim.’

Interviewed by the BBC’s Andrew Neil tonight, Boris Johnson admitted Sir Kim Darroch’s resignation had been partly due to his refusal to defend him in an ITV debate 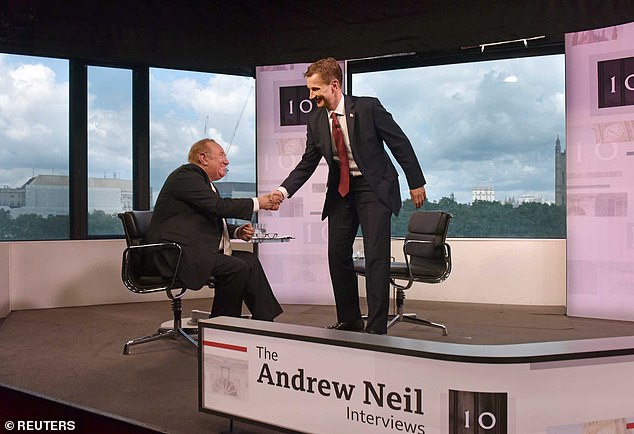 The admission from Mr Johnson comes after Mr Trump made an extraordinary volte face by praising the ambassador and saying he ‘wished him well’.

The president said Sir Kim had said ‘pretty nice things’ about him, days after branding the British envoy a ‘pompous fool’ and ‘a pretty stupid guy’ in an online rant.

But addressing reporters at the White House this afternoon Mr Trump said he had seen a tweet from Republican senator Lindsey Graham, pointing out a line of the leaked messages which could be seen to have praised the US leader.

Hunt refuses to guarantee Brexit will happen by Christmas

Boris Johnson and Jeremy Hunt clashed bitterly over Brexit tonight after the Foreign Secretary refused to guarantee the UK will leave the EU by Christmas.

The rivals swiped at each other as they faced separate grillings from combative BBC interviewer Andrew Neil.

Mr Hunt said he was not giving any ‘commitment’ on Brexit dates, while arguing that he was the candidate with the best chance of getting the UK out of the bloc quickly.

But front runner Mr Johnson insisted he will force through Brexit by October 31 ‘come what may’ and failure to do so would ‘erode trust’.

Sir Kim referenced the Terminator, a science fiction cyborg killer played by Arnold Schwarzenegger – whose catchphrase is ‘I’ll be back’ – in a description of Mr Trump’s ability to keep carrying on.

‘I wish the British ambassador well. Some people just told me – too bad – they said he actually said some very good things about me,’ Mr Trump said.

Mr Johnson was repeatedly pushed tonight on whether he had been ‘craven’ to Mr Trump by refusing to support Sir Kim full-heartedly.

Despite Neil pointing out he had refused to say he should stay in post, Mr Johnson insisted he had backed the diplomat.

‘I thought what was necessary was to give a general statement of support for the right and the duty and the ability of civil servants to convey their views to ministers confidentially, and to have that confidentiality respected.’

During the interviews tonight, Mr Hunt said he was not giving any ‘commitment’ on Brexit dates, while arguing that he was the candidate with the best chance of getting the UK out of the bloc quickly.

But front runner Mr Johnson insisted he will force through Brexit by October 31 ‘come what may’ and failure to do so would ‘erode trust’.

The clash came with just over a week to go before the contest reaches its dramatic conclusion, with the winner getting the keys to Downing Street.

Despite claims most Tory members intended to vote early, MailOnline understands only around half of eligible activists have cast their ballots so far.

Business Secretary Greg Clark today became the latest senior Conservative to signal he will join a mutiny over hard Brexit.

He warned No Deal – which Mr Johnson has said should happen in October if an agreement cannot be struck with the EU – would mean the loss of ‘many thousands’ of jobs.

When Neil demanded to know whether Mr Hunt could pledge that the UK would be out by the end of the year, he replied merely that he ‘expected’ it to be the case.

‘I am not going to give those commitments,’ he said.

Pressed again, he added: ‘Prime Ministers should only make promises they know they can deliver… I’m being honest with people.’

Mr Hunt said his ‘worry’ was that Conservative members would ‘vote with their hearts instead of their heads’.

Boris: I will end prosecution of NI vets

Boris Johnson has pledged to end ‘unfair’ prosecutions of veterans who served in Northern Ireland as part of his push to become the next Prime Minister.

The Tory leadership contender has joined rival Jeremy Hunt in backing a public campaign supporting UK soldiers who served during the Troubles.

A number of veterans are facing inquiries, including Soldier F, who has been charged in relation to the killings of two protesters on Bloody Sunday in Londonderry in 1972.

Mr Johnson, speaking from his campaign headquarters on Thursday, also reportedly promised to appoint a Veterans Minister if he is chosen to lead Britain.  He told The Sun: ‘We need to end unfair trials of people who served their Queen and country when no new evidence has been produced, and when the accusations have already been exhaustively questioned in court.

He insisted the ‘quickest way’ to leave the EU was ‘to send to Brussels a prime minister who can negotiate a deal that will get through Parliament – and I’m that person’.

But in his separate session with Neil, Mr Johnson warned that failure to deliver Brexit by the Halloween deadline would lead to ‘a huge erosion of trust in politics’.

‘I think it’s very, very important that we get ready to leave on 31 October, come what may, and we will.’

Earlier, Mr Clark said he would ‘strain every sinew to avoid that’ alongside colleagues.

The comments underline the challenge facing Mr Johnson if he tries to follow through on his solemn ‘do or die’ pledge made during the campaign.

Mr Hunt has taken a marginally softer stance by saying he would be willing to delay if a deal was in sight – and admitting that Parliament can probably block No Deal.

Speaking to Sky News today, Mr Clark said: ‘It’s evident that if you have the disruption that comes from a no-deal Brexit there will be people that will lose their jobs,’ he told Sky News.

‘It’s many thousands of jobs. Everyone knows that.’

Mr Clark cited evidence from businesses when challenged that some are claiming the UK could weather an exit on World Trade Organisation terms. 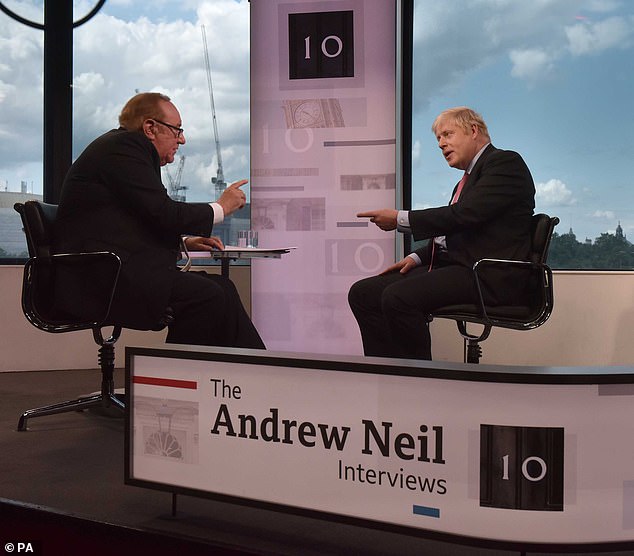 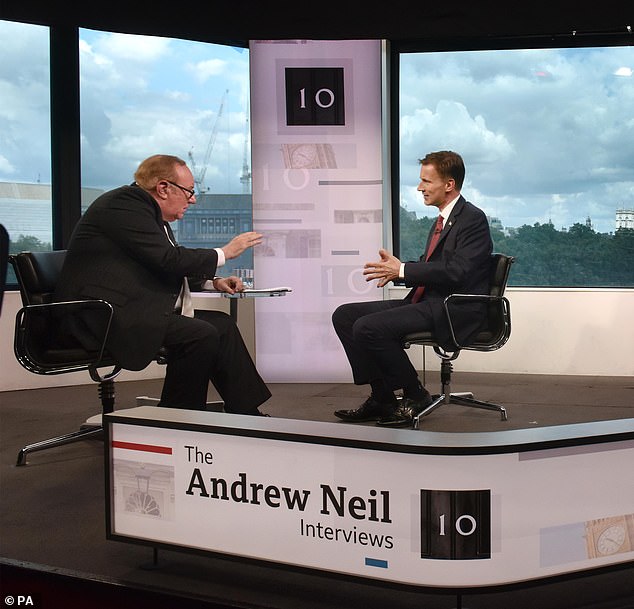 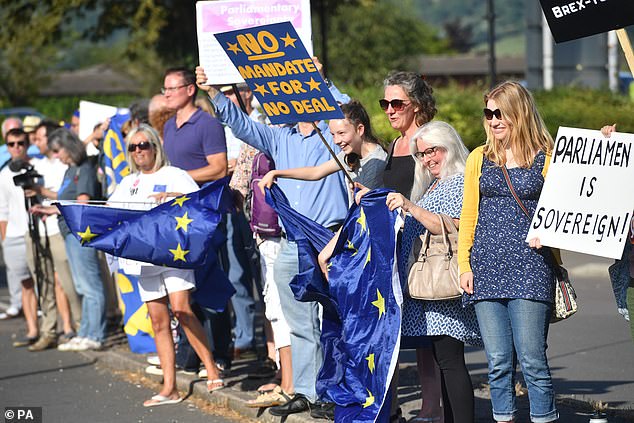 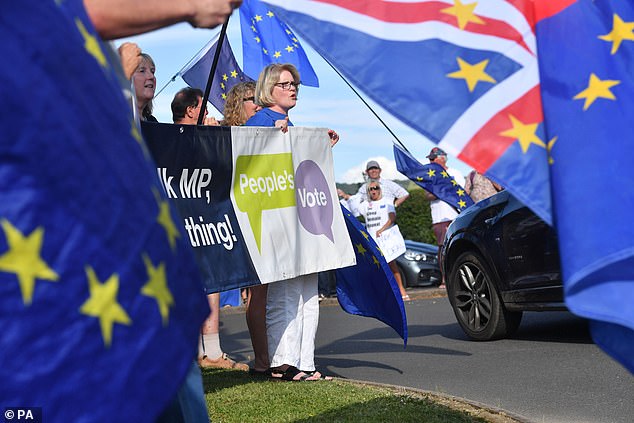 Mr Clark hinted strongly that he will vote against No Deal in Parliament.

‘I will do everything I can in whatever forum,’ he said.

Tension is building in the contest, but Mr Johnson appears to have a commanding lead.

Amber Rudd has appeared to drop her opposition to No Deal Brexit – potentially paving the way to stay in a Boris Johnson Cabinet.

A survey for the grassroots ConservativeHome website yesterday found 72 per cent also said they had either backed or planned to back Mr Johnson.

Mr Hunt has admitted he is the underdog in the contest to replace Theresa May, but vowed to fight to the end.

Mr Johnson was put on notice to expect a legal battle with former prime minister Sir John Major if he tries to suspend Parliament in order to force through a no-deal Brexit. 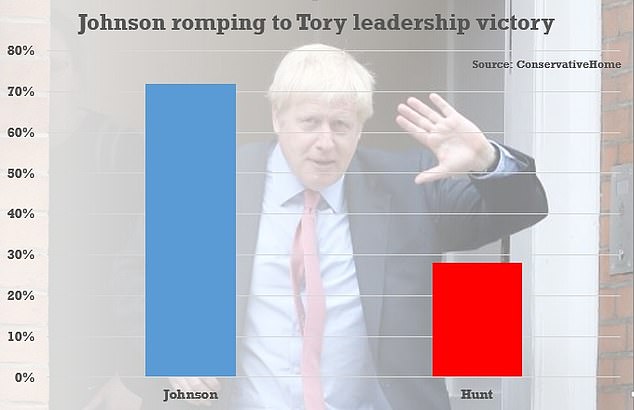 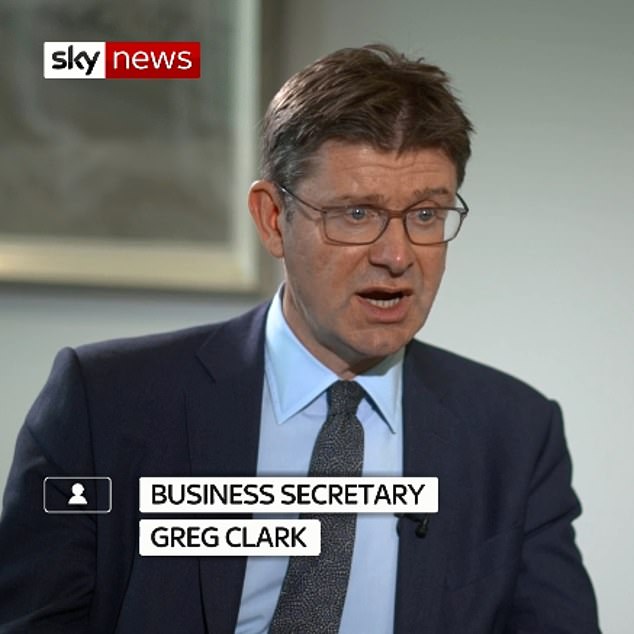 In an interview with Sky News, Business Secretary Greg Clark today became the latest senior Conservative to signal he will join a mutiny over hard Brexit

Today: Leadership contenders put themselves under the microscope in separate TV interviews with the BBC’s Andrew Neil.