Boris Johnson today returned to the House of Commons for PMQs for the first time since his recovery from coronavirus as he admitted the UK’s death toll from the disease is ‘appalling’.

Mr Johnson clashed with the new Labour leader Sir Keir Starmer – their first ever exchanges at PMQs – as the latter accused his counterpart of botching the UK’s response to the outbreak.

Sir Keir said that only last week the government had boasted that other countries were looking at the ‘apparent success’ of Downing Street’s approach to tackling the virus.

But with the death toll now almost at 30,000 and worse than any other country in Europe, Sir Keir asked Mr Johnson: ‘How on earth did it come to this?’

Mr Johnson insisted now is not the time for international comparisons due to differences in the way countries compile their statistics. 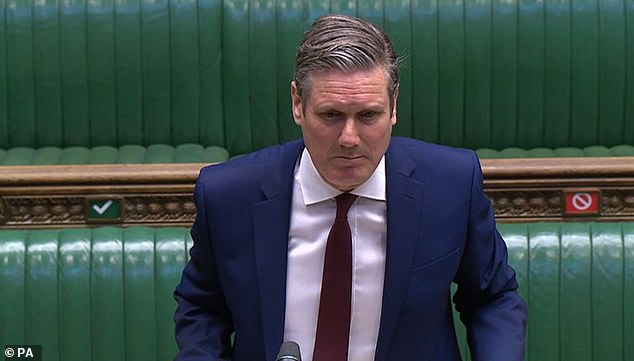 Mr Johnson last appeared in front of MPs on March 25 when the UK’s lockdown was just two days old.

He spent much of the six weeks since then recovering from his own battle with coronavirus before formally returning to work last week.

He had been due to attend PMQs last Wednesday but stand-in Dominic Raab continued to face Sir Keir because of the birth of Mr Johnson’s son Wilfred.

Sir Keir welcomed Mr Johnson back to the chamber before tearing into his handling of the coronavirus crisis.

‘Can I welcome the Prime Minister back to his place and say that it is good to see him back in Parliament,’ he said.

‘Although I have done this privately, can I congratulate him publicly with Carrie on the birth of their son.

‘When the Prime Minister returned to work a week ago Monday he said that many people were looking at the apparent success of the government’s approach.

‘But yesterday we learned tragically that at least 29,427 people in the UK have now lost their lives to this dreadful virus.

‘That is now the highest number in Europe. It is the second highest in the world.

‘That is not success, or apparent success, so can the Prime Minister tell us how on earth did it come to this?’

Mr Johnson replied: ‘First, of course, every death is a tragedy and he is right to draw attention to the appalling statistics not just in this country but of course around the world.

‘I think I would echo really in answer to his question what we have heard from Professor David Spiegelhalter and others that at this stage I don’t think that international comparisons and the data is yet there to draw the conclusions that we want.

‘What I can tell him is that at every stage as we took the decisions that we did we were governed by one overriding principle and aim and that was to save lives and to protect our NHS.

‘I believe that of course there will be a time to look at what decisions we took and whether we could have taken different decisions.

‘But I have absolutely no doubt that what the people of this country want us to do now is as I said just now, to suppress this disease, to keep suppressing this disease and to begin the work of getting our country’s economy back on its feet.’

There are growing fears among some Tory MPs about how the next few months could play out given the current state of the coronavirus crisis and the scale of the death toll.

Some believe Sir Keir could be well suited to scrutinising Mr Johnson and the government’s response to the outbreak given the former’s previous roll as the director of public prosecutions.

One worried Tory MP told Politico: ‘We are in a completely different world now, in terms of the opposition as well as the virus.

‘Starmer is a prosecuting lawyer, and it is going to be the case for the prosecution every week, with Boris as the accused.’