Boris Johnson is hammering home his key messages on Brexit and the NHS today as Tory MPs breathed a sigh of relief that the manifesto had ‘avoided the booby traps’.

The PM is campaigning in Wales after unveiling the ‘safety first’ programme yesterday, focusing on pledges to get the UK out of the EU, recruit more nurses, and cut taxes.

The Tory offer deliberately made no effort to compete with the extraordinary spending splurge proposed by Labour.

Jeremy Corbyn has put forward an eye-watering £83billion a year in day-to-day spending, plus hundreds of billions on nationalisation – including the state seizing chunks of BT to offer everyone free broadband.

In an apparent sign of desperation yesterday, shadow chancellor John McDonnell announced another £58billion would be handed to women pensioners – despite the measure not having been costed in its manifesto.

Boris Johnson is campaigning in Wales after unveiling the ‘safety first’ programme yesterday (pictured), focusing on pledges to get the UK out of the EU, recruit more nurses, and cut taxes Extend the Cancer Drugs Fund into an Innovative Medicines Fund.

Introduction of an NHS Visa so that applications are cheaper and dealt with quicker for health workers who want to come to the UK.

An extra £1bn a year for social care services.

NHS staff on night shifts, disabled and terminally ill patients and their families to be exempt from hospital car parking charges.

CRIME: A pledge to spend £750m to start delivery of the government’s promised 20,000 additional police officers.

Initial funding to start delivery of the government’s £2.5bn commitment to create an additional 10,000 prison places.

Some £700m in extra funding to boost help for children with special educational needs.

Move towards introducing a Right to Retrain with a £3bn National Skills Fund.

DEFENCE: A total of £2.2bn in additional funding for the Armed Forces to pay for further modernisation.

The introduction of a Veteran’s Railcard.

The offer of wraparound childcare for military personnel.

INFRASTRUCTURE: A overall package of funding worth £100bn to improve the UK’s roads and rail network.

Spend £500m to reverse some of the cuts to the UK’s rail network resulting from the 1960s Beeching report.

TAX: Raise the threshold at which people start making National Insurance contributions to £9,500 in April 2020 with an ‘ultimate ambition’ to raise it to £12,500.

Introduce a ‘Triple Lock’ – no increase on income tax, National Insurance or VAT.

Pause a scheduled reduction in the rate of corporation tax, keeping it at 19 per cent.

WELFARE: Keep the existing pensions triple lock so that it continues to rise in line with either wages, inflation or 2.5 per cent, whichever is highest.

A new £1bn fund for wraparound childcare available both after school and outside of term time.

Pressure the BBC to keep free TV licences for over-75s.

ENVIRONMENT: A pledge to reach net zero carbon emissions by 2050.

Introduce a ban on exporting plastic waste to third world countries. to prevent it being dumped in the ocean.

Invest £2.5bn on Home Upgrade Grants so that people can replace boilers and improve insulation.

Launching the Tory document in Telford yesterday, Mr Johnson mocked Mr Corbyn’s decision to take a ‘neutral’ stance in a second referendum, saying: ‘He used to be indecisive, now, he’s not so sure.’

Senior Tories acknowledged that they had taken a ‘safety first’ approach with the manifesto, following the disastrous unravelling of Theresa May’s 2017 prospectus, which is widely thought to have cost her a Commons majority.

Pledges to bring back grammar schools and allow a Commons vote on repealing the foxhunting ban were dropped.

And the social care crisis was fudged, with only a commitment to inject an extra £1billion a year and hold cross-party talks in the future.

One Tory MP in a Northern seat told MailOnline: ‘He avoided the booby traps. He is like a man carrying a ming vase on a slippery floor.’

They said Conservative support ‘felt quite solid’ and was ‘far more positive’ than at the same stage in 2017. ‘As long as they can keep this up over the next 17 days I can imagine that there are going to be some good solid gains,’ the MP said.

Ministers scarred by the row over Mrs May’s ‘Dementia Tax’ said the PM was right to keep the manifesto vague.

One said: ‘If it’s not being talked about by tomorrow evening, that’s a good thing.’

The Tory event came as a string of polls suggested Labour’s manifesto had fallen flat with voters, leaving the Tories with a double-digit lead. One major analysis put them on course for a majority of 48.

The relatively modest nature of the new Tory pledges means that for every £30 Labour has committed to new day-to-day spending, the Tories will spend just £1.

Conservative plans for an additional £100billion in capital spending are dwarfed by Labour’s £400billion proposals, which do not cover the cost of nationalising parts of the economy, such as rail, energy, water and broadband.

The manifesto confirmed a string of pledges, a handful of them new, including:

Many of the biggest commitments, such as billions of pounds for schools and hospitals are already in spending plans and are not included in a financial ‘scoresheet’ accompanying the manifesto.

But neither policy made the cut in yesterday’s manifesto.

And the PM said better-off voters would have to wait for more substantial tax cuts. ‘I have not lost any of my tax-cutting zeal,’ he said.

‘The cut in national insurance helps every taxpayer in the country. But at this juncture, as a result of the economic disaster left behind by the last Labour government, it is right to focus our tax cuts on the people who need them most.’

Paul Johnson, director of the independent Institute for Fiscal Studies, said: ‘If the Labour and Liberal Democrat manifestos were notable for the scale of their ambitions the Conservative one is not.

‘If a single budget had contained all these tax and spending proposals we would have been calling it modest.

Boris Johnson’s blueprint for post-Brexit Britain: From a million more homes to 50,000 new nurses and an Australian-style immigration system, JACK DOYLE assesses how the Tory’s ‘sensible’ manifesto adds up

Compared with Labour’s vast spending spree, the Tory manifesto is a model of fiscal restraint.

Instead of big spending commitments, Boris Johnson’s core messages – on Brexit and public services funding – are aimed at securing victory at the polls.

Get Brexit Done and Unleash Britain’s Potential; Leave the EU before the end of January; No extension to the transition beyond 2020.

Analysis: The central Tory campaign message is aimed to unite frustrated Leave voters and Remainers who just want to move on, and contrast Mr Johnson’s decisiveness with Jeremy Corbyn’s fence-sitting. The tough message on not extending transition is aimed at would-be Brexit Party voters.

Analysis: In a rapid turnaround, some polls show Mr Johnson ahead of Jeremy Corbyn on the NHS, a sign that increased funding – £650million more a week – is more than neutralising Labour’s core message. An unequivocal pledge not to privatise the health service. 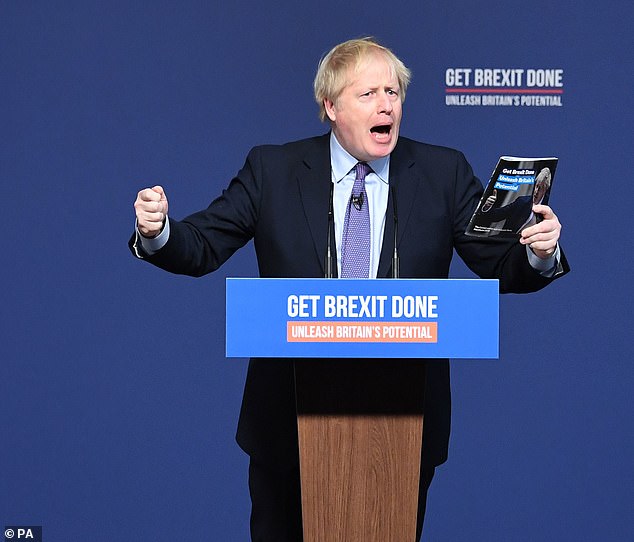 Compared with Labour’s vast spending spree, the Tory manifesto is a model of fiscal restraint

Analysis: Higher earners can be confident their taxes won’t go up, but they aren’t guaranteed a tax cut. Instead Mr Johnson is targeting his limited tax-cutting pledges at lower earners who will get £100 back next year because, he said, they ‘need them most’.

Analysis: Mr Johnson promises to ‘take control’ and get numbers down while letting in the ‘brightest and best’, is designed to show moderation and attract the highly skilled and NHS staff while exposing Labour’s lax open door policy. 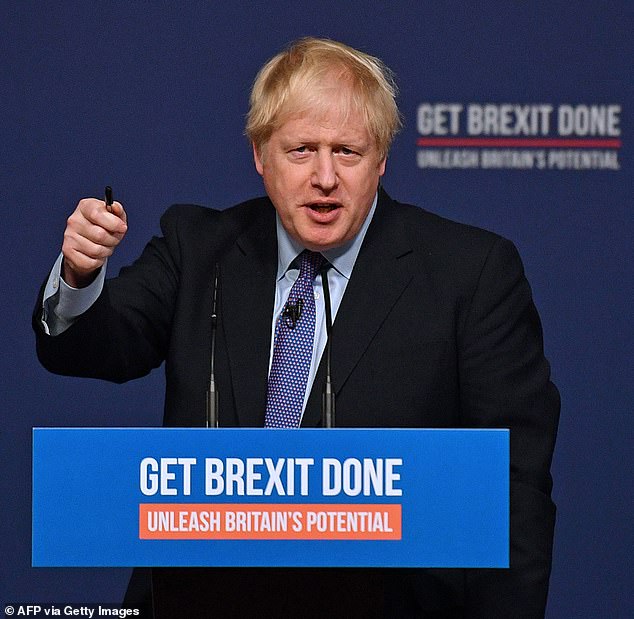 Another big spending promise designed to crack down on rising crime and restore the party’s reputation on Law and Order is the promise of 20,000 more police officers; tougher stop and search powers; tasers; knife crime crackdown

Analysis: Another big spending promise designed to crack down on rising crime and restore the party’s reputation on Law and Order.

Analysis: Protecting the ‘law-abiding majority’ by keeping criminals in jail for longer sends a clear message about Mr Johnson’s priorities.

One billion extra a year for social care; cross party review; promise no-one has to sell their home to pay for care.

Analysis: No fully costed system yet but a ‘cast iron guarantee’ of a new system in five years and a clear signal of intent – more money and a crucial pledge that pensioners won’t have to sell their homes, to avoid the ‘dementia tax’ nightmare of 2017. 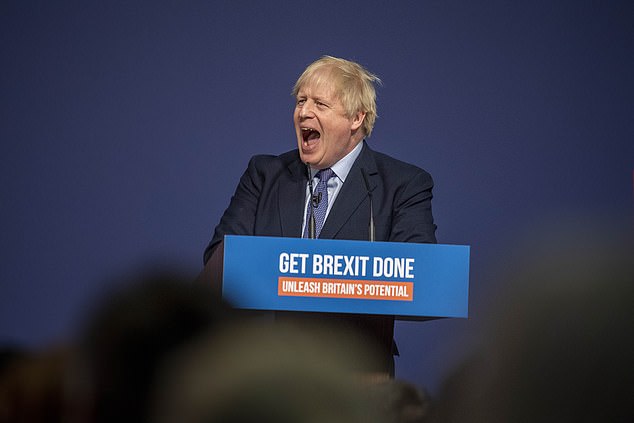 The central Tory campaign message is aimed to unite frustrated Leave voters and Remainers who just want to move on, and contrast Mr Johnson’s decisiveness with Jeremy Corbyn’s fence-sitting

Analysis: Another weak spot in 2017 neutralised with more cash, designed to ‘level up’ funding in ‘left behind’ areas and sustain Mr Johnson’s pledge to spread opportunity. 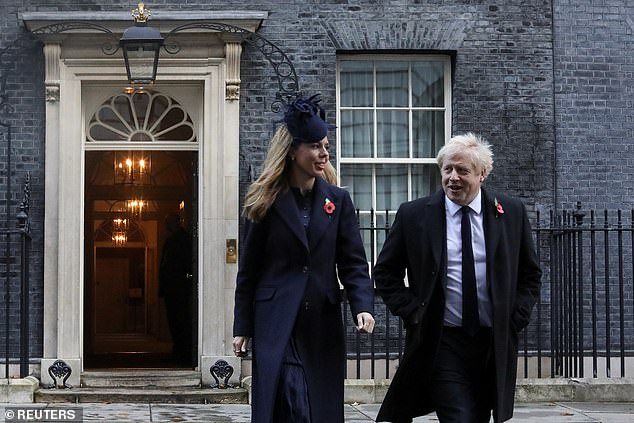 Analysis: A wage boost to millions which also shows low income voters Mr Johnson is on their side, appeals to the young and neutralises a Labour attack. 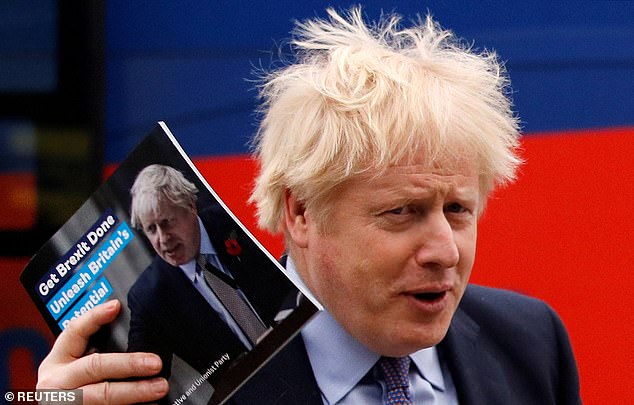 The Tory manifesto promises a wage boost to millions which also shows low income voters Mr Johnson is on their side, appeals to the young and neutralises a Labour attack

Analysis: No repeat of the 2017 threat to winter fuel payments and pensions which alienated core Tory voters.

Debt to be lower at the end of the Parliament; public sector net investment no higher than 3 per cent of GDP.

Analysis: Higher borrowing for capital projects and infrastructure to take advantage of historically low rates, but no Labour-style spending splurge. 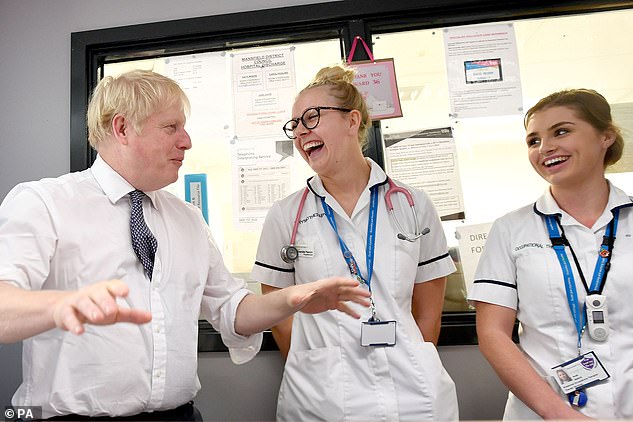 Analysis: Modest increases to defence spending and a vital lifeline to Northern Ireland veterans in an area where Corbyn is weak.

Analysis: Increase the number of new homes to appeal to young voters while not building on protected areas. 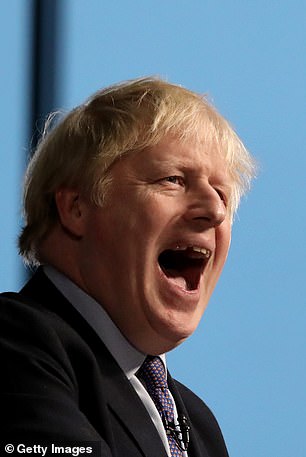 Analysis: Fox hunting dealt Theresa May a damaging blow so there will be no repeat and instead a series of animal friendly policies.

Full fibre and gigabit broadband across the UK by 2025; £5billion to reach far flung places.

Analysis: A key Johnson pledge from the leadership campaign to help businesses in rural areas who complain of slow speeds.

Analysis: A one-off business rate relief and promise of a longer term review to help the struggling high street and billions more for research and development spending.