Boris Johnson and Jeremy Hunt are tonight clashing for the final time in the Tory leadership battle as the Foreign Secretary insisted the race for Number 10 is not over.

The pair are taking part in ‘The Final Showdown’, hosted by The Sun and TalkRadio, as they both make last ditch attempts at persuading Conservative members to support their candidacy.

Mr Johnson insisted he was the best placed candidate to tackle the ‘job destroying lunacy of Jeremy Corbyn’ as he claimed to be the ‘right person to unleash’ on the Brexit impasse.

But Mr Hunt said his record as health secretary showed he was ready to ‘deliver for our country’ and make the UK ‘walk tall in the world’.

The Foreign Secretary also claimed Mr Johnson was ‘guaranteeing something that he knows’ he cannot necessarily deliver over his ‘do or die’ pledge to take Britain out of the EU on October 31.

Mr Hunt said ‘if you get this wrong you will end up in an election’ before Brexit takes place and the UK would then end up with Mr Corbyn ‘the one person who will never ever deliver Brexit’.

But Mr Johnson hit back and demanded to know ‘how many days’ he would be willing to delay Brexit by: ‘Is that three days? Six days? Christmas? Which Christmas is it?’

The latest comments came after Mr Hunt insisted that the race for Number 10 was not over despite Mr Johnson now being viewed as the prohibitive favourite to take over from Theresa May.

The former foreign secretary is thought to be well ahead of his rival in the contest for votes from Conservative Party members with the new PM due to be installed on July 24.

Such is the strength of belief in Mr Johnson wining the battle that Tory heavyweights are now locked in a furious fight for jobs in the former mayor of London’s future Cabinet.

Amber Rudd, Sajid Javid, Matt Hancock and Liz Truss are all already jockeying for prominent posts in the new administration.

Meanwhile, there are also claims that Mr Johnson has now turned his attention to what he will do in his first 100 days in power.

He is thought to be planning an early trip to the US to try to thrash out a post-Brexit trade deal with Donald Trump.

But a defiant Mr Hunt, who spent the day in Brussels holding talks with EU counterparts on the Iran crisis, insisted the result was still up for grabs.

‘Getting back to the UK and reading a raft of stories that assume Boris will be next PM,’ he tweeted.

‘Don’t! We have been getting huge numbers of switchers, won both the ITV debate and Neil interview and this all depends on how far Boris was ahead at start which no one knows… ‘

Mr Hunt will be hoping that tonight’s head-to-head, which is the second and final showdown between the pair, will swing the votes of activists.

Polls show it is Mr Johnson who is the choice of an overwhelming majority of the Tory grassroots.

The last encounter between the two men on ITV last week was a spiky affair dominated by the fallout from the leak of the diplomatic dispatches of Britain’s ambassador to the US Sir Kim Darroch criticising Mr Trump’s White House as ‘dysfunctional’ and ‘inept’.

If he succeeds in gaining the keys to Number 10, one of Mr Johnson’s first acts is expected to be an attempt to reset relations with Mr Trump after he responded to the leaked cables with a furious tirade against Sir Kim and Mrs May. 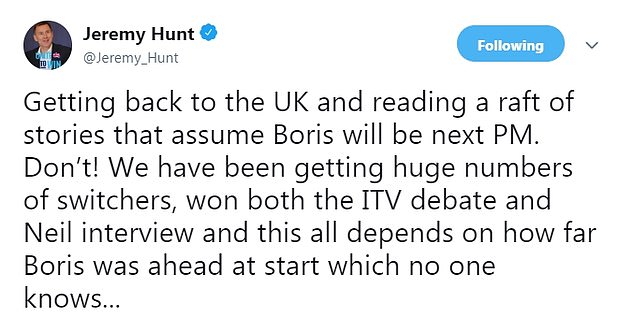 A defiant Mr Hunt, who has spent the day in Brussels holding talks with EU counterparts on the Iran crisis, insisted the result was still up for grabs

Dr Fox, who is supporting Mr Hunt for the Tory leadership, told BBC Radio 4’s Today programme: ‘We can’t negotiate anything with the US until after we have left the European Union. It would be in breach of European law for us to do that.’

Mr Hunt today made clear that he believed Sir Kim’s successor in Washington should be a career diplomat rather than a political appointee.