Boris Johnson was on a collision course with the Church over Brexit last night.

In an extraordinary intervention, the UK’s five Anglican archbishops warned that controversial legislation would set a ‘disastrous precedent’ and undermine Britain’s standing in the world.

The group, led by the Archbishop of Canterbury, Justin Welby, said the Internal Market Bill would ride roughshod over the Withdrawal Agreement signed with the EU last year – and potentially put peace in Northern Ireland at risk.

They added: ‘If carefully negotiated terms are not honoured and laws can be ‘legally’ broken, on what foundations does our democracy stand?’ 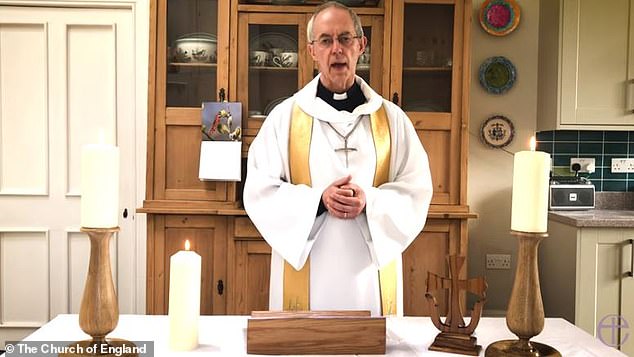 The group, led by the Archbishop of Canterbury, Justin Welby (pictured above), said the Internal Market Bill would ride roughshod over the Withdrawal Agreement signed with the EU last year

The intervention sparked a furious backlash from Tory MPs last night. Former Brexit minister David Jones said the comments ‘betray a lack of understanding of the issues involved’. He added: ‘This is way beyond the remit of the Church. It is a straightforward question of constitutional propriety.

‘Once again, the archbishops seem to have swallowed every scrap of Remain propaganda unquestioningly and are now regurgitating it. It makes my blood boil.’

In a letter to the Financial Times today, the five archbishops appear to side with the EU’s interpretation of events. 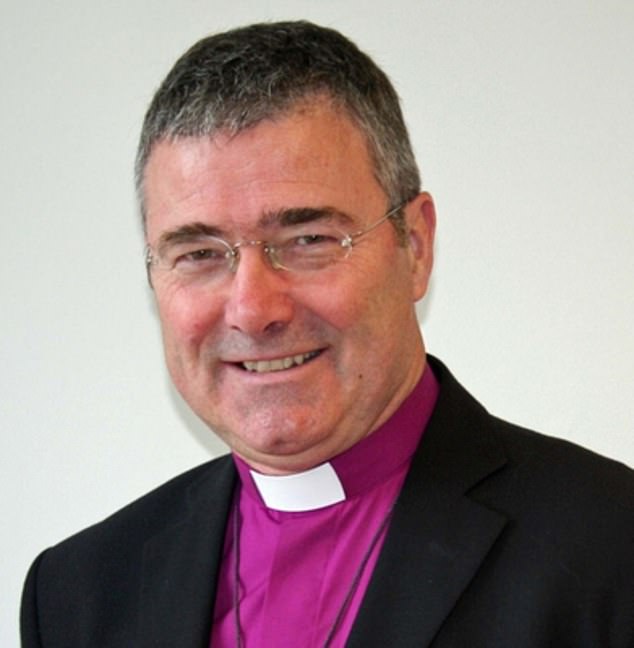 In a letter to the Financial Times today, the five archbishops appear to side with the EU’s interpretation of events. Archbishop of Armagh, John McDowell, pictured above 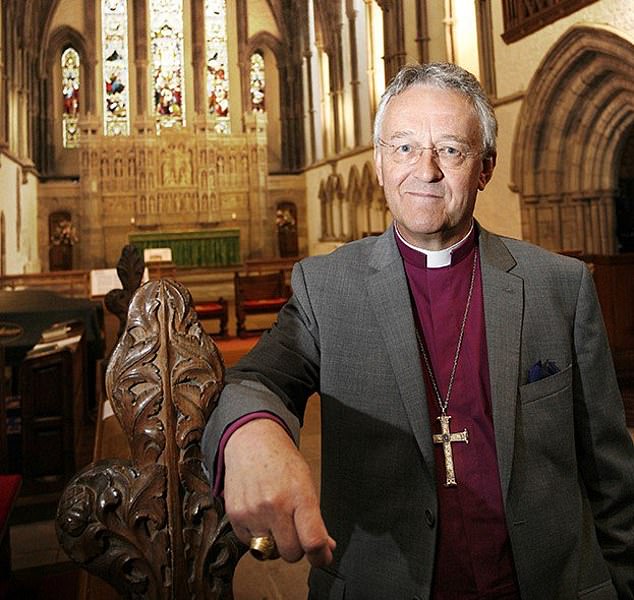 The Archbishop of Wales, John Davies (pictured above),  was one of the five Anglican archbishops to sign the letter 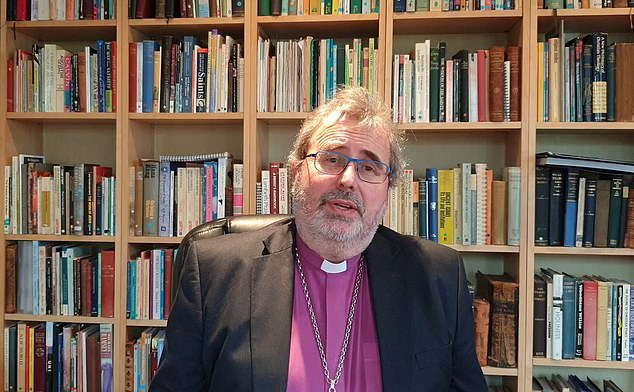 The letter echoes criticism of the legislation from both Brussels and Labour. Primus of the Scottish Episcopal Church, Mark Strange, pictured above

They state that the legislation ‘currently asks the country’s highest law-making body to equip a government minister to break international law’, adding: ‘This has enormous moral, as well as political and legal, consequences. We believe this would create a disastrous precedent. It is particularly disturbing for all of us who feel a sense of duty and responsibility to the Good Friday Agreement.’

The letter echoes criticism of the legislation from both Brussels and Labour and could embolden peers to wreck the legislation, which begins its passage through the House of Lords today.

This would set up a constitutional clash with the Commons and undermine the Prime Minister’s negotiating hand with Brussels.

Steve Baker, another former Brexit minister, said he was ‘extremely disappointed that the archbishops are sowing disunity and division at a time when they could instead build up much needed harmony in our nation’. He added: ‘I pray that the archbishops might be blessed with better legal advice. They would then realise the hysterics of various lawyers are not justified.’

Fellow Tory Andrew Percy said: ‘These unelected bishops have no legitimacy. We shouldn’t be mixing politics and religion.

Downing Street declined to comment, but one Whitehall source said it was ‘no surprise to find the bishops still don’t like Brexit’.

The row comes at a time when Brexit talks with the EU are in crisis. The UK’s chief Brexit negotiator Lord Frost is expected to speak to EU counterpart Michel Barnier today to see if anything can be salvaged from the wreckage of trade negotiations.

The Internal Market Bill triggered a political earthquake when it was published last month. 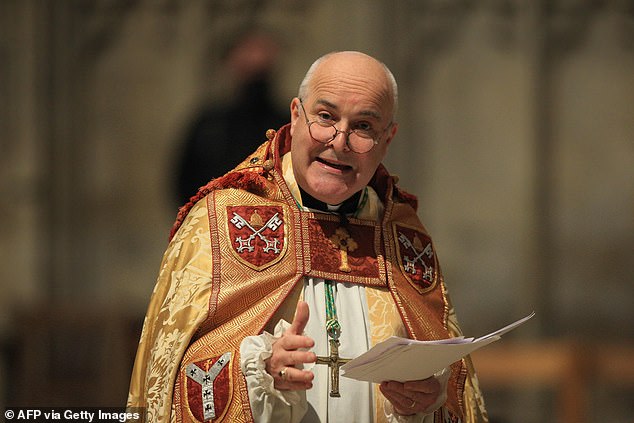 The letter was signed by the Archbishop of York, Stephen Cottrell (pictured above)

The legislation over-rides certain parts of the Northern Ireland Protocol, which was negotiated by Mr Johnson last year as part of his Brexit deal.

Northern Ireland Secretary Brandon Lewis sparked uproar in the Commons when he told MPs the legislation ‘does break international law in a very specific and limited way’.

Mr Johnson insisted the ‘excellent’ legislation was needed to prevent the EU exploiting grey areas in the Brexit deal to drive a wedge between Northern Ireland and the rest of the UK, which he said would undermine the peace process and the integrity of the United Kingdom.

Several senior Tories refused to support the legislation. A major rebellion was only averted when the Government agreed to give MPs a separate vote before the controversial powers in the Bill are used.

The EU says by over-riding the previous deal, Mr Johnson is threatening the Good Friday Agreement. European Commission chief Ursula von der Leyen announced this month that the EU had launched legal proceedings against the UK over the issue.

Boris Johnson’s chief Brexit negotiator will warn Michel Barnier today that the troubled trade talks will resume only if Brussels is willing to make concessions.

Lord Frost is expected to speak to his EU counterpart today to see if anything can be salvaged from the wreckage of trade negotiations which No 10 last week declared to be ‘over’. 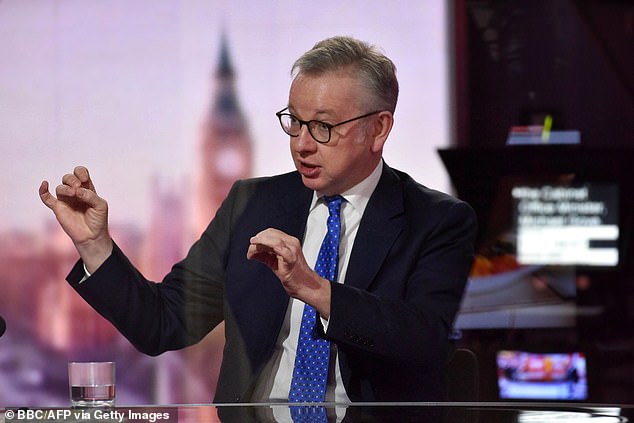 But Mr Gove, who earlier this month said there was a 66 per cent chance of a trade deal, said the prospects were now ‘less’.

He said the EU would have to ‘change their position’ for there to be any further negotiations.

Mr Gove, a leading Cabinet proponent for a deal, acknowledged that failure to strike an agreement would cause ‘turbulence’, adding: ‘I am not blithe or blase about the challenges. But if the choice is between arrangements that tie our hands indefinitely or where we can shape our own future in our own way, then it’s no choice at all.’

Lord Frost held a ‘fractious’ call with Mr Barnier on Friday in which he told him not to bother coming to London today for planned talks.

The two men are expected to speak again today. But sources insisted this was not a sign that the negotiations are back on.