Boris Johnson is on course to win a 48 seat majority at the general election on December 12, a major new poll shows, as the Prime Minister prepares to launch the Tory manifesto today.

Mr Johnson will unveil his blueprint for Britain at an event in Telford this afternoon and he will do so with his Conservative Party riding high in the opinion polls.

A massive new analysis by Datapraxis of 270,000 voter interviews conducted by YouGov predicts the Tories will win 349 seats when the nation goes to the ballot box in less than three weeks.

But the polling is brutal for Labour, with Mr Corbyn’s party set to lose 30 seats and potentially end up with just 213 MPs – that would only be marginally better than when the party was trounced in 1983 when it was led by Michael Foot.

A regular YouGov poll also reveals today that Labour’s manifesto launch last week when Mr Corbyn set out a series of eye-wateringly expensive spending plans has failed to move the dial with the public.

That poll puts the Tories on 42 per cent and 12 points ahead of Labour which is the same margin as was recorded before Mr Corbyn published his manifesto.

Meanwhile, a separate Opinium poll conducted for The Observer gives the Tories a staggering 19 point lead over Labour: 47 per cent to 28 per cent. 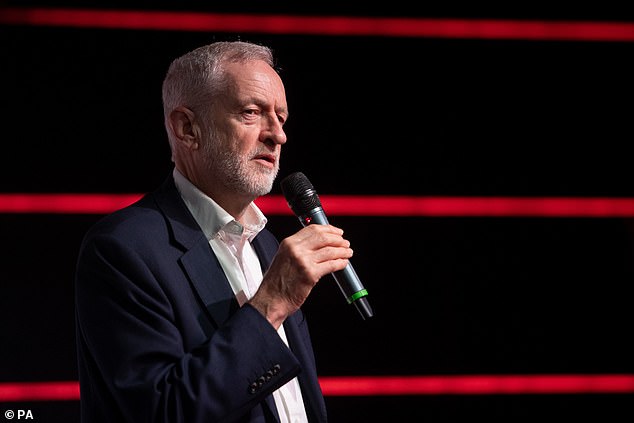 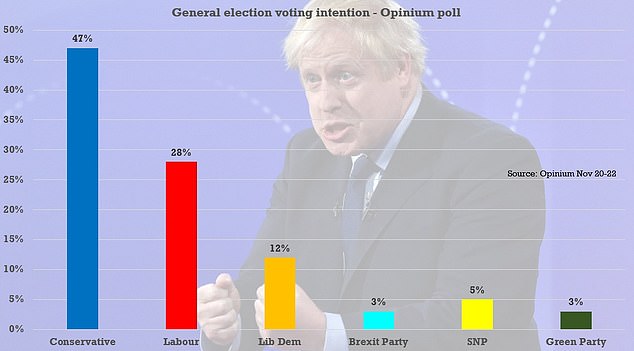 A new Opinium poll puts the Tories 19 points ahead of the Labour Party, 47 per cent to 28 per cent

Mr Johnson will today try to capitalise on and extend his lead over Mr Corbyn by setting out his own spending plans.

However, the PM’s offer will be markedly different to Labour’s offering and will set up a massive tax battle between the two parties.

While Mr Corbyn wants to increase income tax, Mr Johnson will make a cast iron commitment not to increase it and will also confirm he will not allow any hikes to VAT or National Insurance during the life of his administration – a so-called ‘Triple Lock’.

He will also focus heavily on his pledge to ‘get Brexit done’ as will promise to bring his divorce deal back to Parliament before Christmas to make sure the UK leaves the EU by January 31.

In a clear appeal to motorists, the party is also promising the country’s ‘biggest ever’ pothole-filling programme, with an injection of £2 billion as part of the Government national infrastructure strategy.

The poll analysis carried out by Datapraxis suggests that Mr Johnson could make do with a middle of the road manifesto launch.

But the PM will be hoping that his blueprint can deliver a fatal blow to Labour and guarantee him victory on December 12.

The Datapraxis work for The Sunday Times suggests that the Tories could win 349 seats which would give Mr Johnson a majority of 48.

That would represent an increase of 57 seats on where the Conservatives are currently.

Meanwhile, Labour is projected to finish with 213 seats, down 30, a result which would consign Mr Corbyn to history as one of the party’s least successful leaders.

The poll analysis is also bad news for the Liberal Democrats with Jo Swinson’s party due to go backwards from 20 seats to just 14 while the SNP is expected to wipe the floor in Scotland by winning 49 seats, up 14 on the party’s 2017 mark. 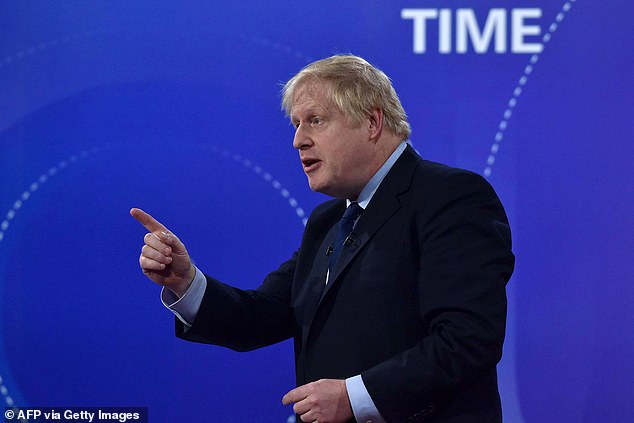 Mr Johnson, pictured during a Question Time appearance on Friday, is on course to win a 48 seat majority

The latest YouGov poll puts the Tories on 42 per cent, Labour on 30 per cent, the Lib Dems on 16 per cent and the Brexit Party on three per cent.

Mr Johnson will today pledge to reintroduce his Withdrawal Agreement Bill (WAB) – the legislation needed to actually make an orderly Breexit happen – in December if he is re-elected as PM.

He said it would be his ‘early Christmas present’ for voters who are fed up with wrangling over Britain’s departure from the EU.

‘As families sit down to carve up their turkeys this Christmas, I want them to enjoy their festive-season free from the seemingly unending Brexit box-set drama,’ he said in a statement ahead of the launch event in the West Midlands.

‘The Conservative manifesto, which I’m proud to launch today, will get Brexit done and allow us to move on and unleash the potential of the whole country.’