Boris Johnson has rushed to congratulate Joe Biden after American TV networks named him as the 46th US President.

The Prime Minister issued a statement earlier this evening which stated the the US was ‘our most important ally’ before stating he would ‘look froward to working closely together on our shared priorities, from climate change to trade and security’.

Nicola Sturgeon and Sir Keir Starmer are among other British political leaders who have taken to social media after CNN, NBC, ABC, CBS, the AP and USA Today all made the call over Biden’s projected victory.

Votes in Philadelphia pushed Biden’s margin in must-win Pennsylvania to 34,558, more than 0.5 per cent – putting the result in the state beyond doubt.

That took him to 273 electoral votes – putting the 77-year-old on a clear path to the White House.

The states of Nevada, Arizona, Georgia and North Carolina were still to be called.

Biden, who will address the nation tonight, has since been congratulated by other UK political leaders.

It was accompanied by a statement that said: ‘Congratulations to Joe Biden on his election as President of the United States and to Kamala Harris on her historic achievement.

‘The US is our most important ally and I look froward to working closely together on our shared priorities, from climate change to trade and security.’ 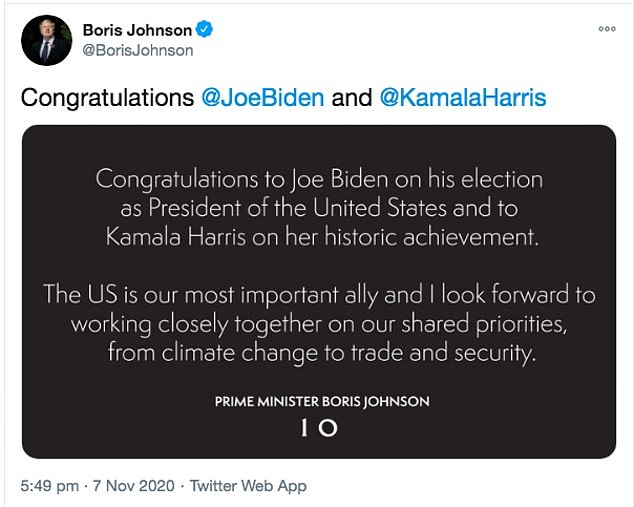 Labour leader Sir Keir Starmer also said: ‘Congratulations to Joe Biden on his election as President of the United States of America.

‘He ran a campaign on the values that we in the United Kingdom share – decency, integrity, compassion and strength.’

‘And I want to congratulate @KamalaHarris on being elected Vice-President, the first woman of colour to take that role.

‘Their victory is one for hope and unity over dishonesty and division. Millions of Americans of all backgrounds and ages have come together to vote for a better, more optimistic future.

‘This is also an important moment for the world. It is a chance to reassert America’s place as a force for good on the world stage. A nation that will work with Britain and other allies to defeat this pandemic and fight climate change.

‘Joe Biden and the Democrats have always shared Labour’s values and the links between our two parties remain strong.

‘I am looking forward to building on this and forging an even stronger relationship between the UK and the USA.’ 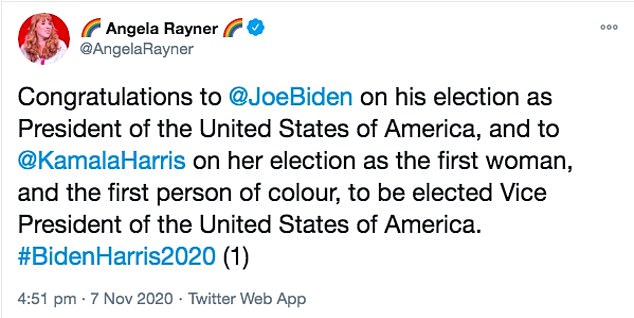 Mark Drakeford, First Minister of Wales, wrote: ‘Congratulations to @JoeBiden on winning the presidential election in a record turnout. And to @KamalaHarris; the first female, black and Indian-American to hold the country’s 2nd highest office.

‘Look forward to working with you to build on the strong links between Wales and USA.’

SNP Westminster leader Ian Blackford congratulated Joe Biden and Kamala Harris on their election victory, saying it ‘gives great hope to progressives here in Scotland and around the world’.

In a series of tweets, he said: ‘The integrity of democracy demands this result is recognised in America and internationally.

‘The Prime Minister must arrange an early call with President-elect Biden to officially acknowledge this result and congratulate him on an historic achievement.

‘In the UK, Boris Johnson must reflect on his own reputation as ‘Britain Trump’.

‘His extreme Brexit policies, and decision to align himself so closely with the narrow politics of Donald Trump have left the Tory Prime Minister increasingly isolated on the world stage.’ 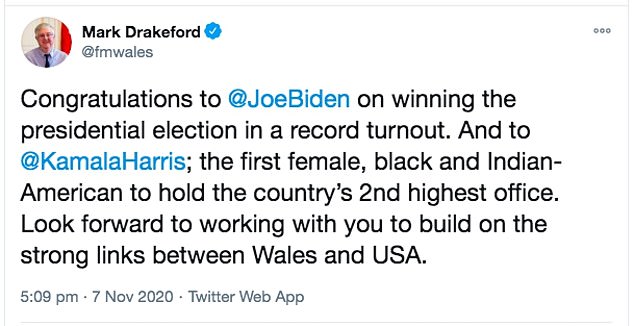 Labour deputy leader Angela Rayner tweeted: ‘A massive congratulations to the 46th President of the USA @JoeBiden and Vice-President @KamalaHarris.’

‘London looks forward to working with you – it’s time to get back to building bridges, not walls.’

‘The world is counting on him to urgently pivot the USA to a trajectory of net-zero carbon emissions and ecological sustainability.’

Irish political leaders have also come out in force to show their support including President Michael D Higgins.

‘Sabina and I, and the staff at Aras an Uachtarain, have the warmest memories of Joe Biden’s two visits to us.

‘The bonds between the peoples of Ireland and the United States are close and strong, and I look forward to our two countries working together to rebuild the much-needed trust in the methods and institutions of national and international solidarity and cooperation.

‘That solidarity is indispensable, if we are to address the urgent challenges of our time, including such diverse issues as the need to address the cause and consequences of the Covid-19 pandemic, climate change, global poverty, hunger, migration and the digitisation of our economies, all issues on which the President-elect has expressed a commitment.

Taosieach Micheal Martin described Mr Biden as a ‘true friend of this nation.’

He said: ‘On behalf of the Government and the people of Ireland, I offer warmest congratulations to Joe Biden on his election as the 46th President of the United States.

‘Ireland takes pride in Joe Biden’s election, just as we are proud of all the generations of Irish women and Irish men and their ancestors whose toil and genius have enriched the diversity that powers America.’

‘Joe Biden has always been a stalwart friend and supporter of Ireland, including of the prosperity, stability and opportunity made possible by the Good Friday Agreement, to which he has pledged his ongoing steadfast support,’ he said.

He added: ‘I also wish to congratulate Kamala Harris on her election as Vice-President and recognise the tremendous significance of her election to the role.

‘I am greatly looking forward to working with the new Administration in the period ahead in progressing international peace and security.’

Mr Martin pledged to make progress on the issue of the undocumented Irish immigrants in the US, of which there are some 50,000.

He said: ‘I also intend to work closely with the new administration and the United States Congress to pursue comprehensive immigration reform, an issue that is so important to tens of thousands of Irish people making a significant contribution to America.’

‘We look forward to working with a £BidenHarris presidency to sustain & strengthen Irish American relations, and so much more.’

Further Education Minister Simon Harris was celebrating his success and that of vice president-elect Kamala Harris, with his young daughter, Saoirse.

He tweeted: ‘Congratulations Mr President-Elect – a man of decency with deep Irish roots. Great to see a Harris going to the White House with you!

‘@KamalaHarris -1st female Vice President of the US. Historic moment & one I will tell my little girl all about. You can be whatever you want to be!’

Boris Johnson has pledged to ‘work closely with whoever’ is US President but Joe Biden’s election victory could present issues on Brexit and the Irish border.

The US-UK relationship has been turbulent under Donald Trump, although he has repeatedly praised Boris Johnson and backed Brexit.

A Biden administration would be expected to put a much greater focus on international diplomacy – including with the UK – than the Trump White House’s ‘America first’ agenda.

While Mr Johnson has enjoyed a largely friendly relationship with Mr Trump – a leader he has been keen to strike up a rapport with since entering Downing Street, likely fuelled by the Government’s desire to strike a trade deal with Washington – he has not met former vice-president Mr Biden. 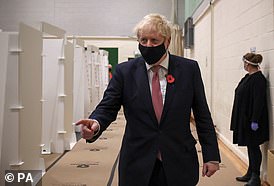 UK efforts to get close to Mr Biden were rebuffed as his campaign team adopted a policy that it would not hold meetings with foreign dignitaries in the run-up to the November 3 polling day.

Speaking to broadcasters on Friday before the election result was revealed, Mr Johnson said: ‘The Prime Minister of the United Kingdom is always going to work closely with whoever is the President of the United States.

‘That’s going to be the case whatever the outcome of this election.’

The Conservative Party leader has been keen to stress that the so-called special relationship will remain unimpeded but there could be trouble ahead given previous utterances from the president-elect about the Prime Minister and Northern Ireland in the past.

In December 2019, Mr Biden labelled the Prime Minister a ‘physical and emotional clone’ of Mr Trump.

Mr Biden has already issued a stark warning about Mr Johnson’s apparent willingness to tear up the Brexit divorce deal over measures aimed at addressing issues around the Irish border.

The 77-year-old, who has Irish roots, has warned the Good Friday Agreement cannot become a ‘casualty of Brexit’ and any future UK-US trade deal would be contingent on respect for the accord.

Foreign Secretary Dominic Raab has sought to play down the Internal Market Bill row, insisting he understood the importance of the Good Friday Agreement to Democrats – Bill Clinton helped broker the deal – and the influence of the Irish lobby.

He said he had met Democrats and ‘explained the UK position and that actually we have been clear all along that there is no threat to the Good Friday Agreement’ from Brexit.

Mr Rifkind told Times Radio: ‘I suspect 10 Downing Street, although it will never say this, will actually also be slightly relieved that they will be dealing with an American president who’ll be predictable, who will not tweet policy when he wakes up in the morning and who will therefore be able to be part of a coherent approach to the issues that we’ll face in government.’

But Lord Kim Darroch, the former ambassador to the US who was forced to quit last year after frank diplomatic cables referring to Mr Trump were leaked, admitted relations would not start in the ‘perfect place’.

Mr Biden is expected to focus on improving US links around the world after Mr Trump strained key international relationships, including with Europe and Nato.

After Brexit, there is speculation that Berlin rather than London may be his main focus in Europe.

Mr Raab has said that while the ‘contours’ of the special relationship will be different under the new president, the ‘bedrock’ – based on strong cultural, economic and security ties – will endure.

One area where things will improve is on the international effort to tackle climate change.

Mr Biden has signalled his intention to rejoin the Paris accord after Mr Trump pulled the US out, something that will be welcomed in Westminster as the UK prepares to host the delayed United Nations Cop26 climate summit.