Boris Johnson left Scotland and Wales fans furious last night after suggesting that Ukraine should get a bye to the World Cup.

The embattled nation is due to play Scotland in a play-off match in June with the winner then going on to face Wales for a spot at the tournament in Qatar in November.

However, a free pass for Ukraine would see both home nations miss out on the tournament. Scotland haven’t qualified for a World Cup since 1998 while Wales’ solitary appearance came way back in 1958.

Asked if Ukraine should be given a bye to the tournament, Mr Johnson said it ‘sounds like a good idea to me’.

Admitting football wasn’t his strong suit, the PM added that he ‘doesn’t see why not’ when pressed on Ukraine’s automatic qualification.

The comments caused fury on social media, with Scotland and Wales fans slamming the PM.

One said: ‘Boris Johnson is saying Scotland or Wales should move over so Ukraine can go to World Cup finals? I don’t think so. Yo Boris, let England give up their place, alright there?’

Another commented: ‘If Boris wants Ukraine to get a World Cup bye, England should retire from the competition!! Why should we be put out.’

While a third added: ‘Boris can do one. Ukraine get ‘BYE’ to Finals? Shows how much he watches football, that screws both Scotland and Wales up.’

Asked about Mr Johnson’s words, an unimpressed Mark Drakeford, First Minister of Wales, said: ‘I don’t imagine that their [Ukraine’s]  thoughts are much preoccupied by football.’ 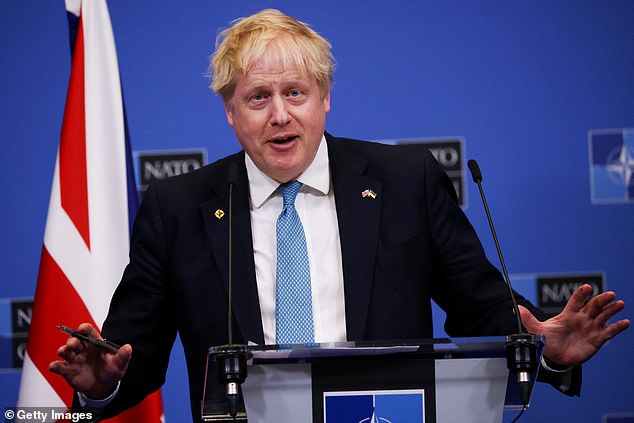 The PM looked alarmed as reporters pointed out a potential bye for Ukraine would be at the expense of Scotland, prompting Mr Johnson to say he is ‘not going to comment on that’.

He added: ‘Let me put it this way. Given what Ukraine has been going through, given the privations that Ukrainian footballers have had to endure, I’m sure that every possible sympathy, and allowances should be made for them.’

The PM made the comments while attending a NATO summit in Brussels yesterday.

He used a press conference to dismiss personal Moscow attacks linked to growing sanctions on its economy and increasing military aid for Ukraine.

Britain committed to a new package of 6,000 more missiles for Ukraine, plus fresh punitive measures against a further 65 individuals and entities.

Among those hit with travel bans and asset freezes were the Wagner Group, a Russian paramilitary organisation accused of plotting to assassinate Ukrainian president Volodymyr Zelensky. 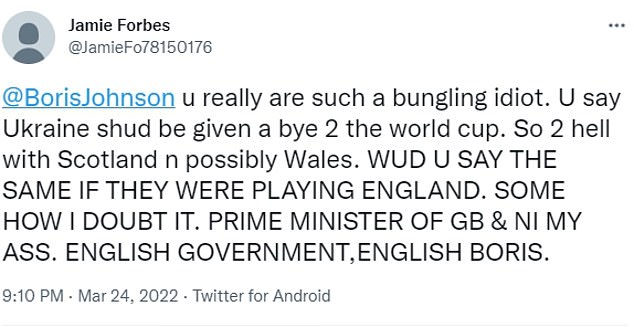 Britain’s response in particular appeared to be riling Mr Putin. Kremlin spokesman Dmitry Peskov was quoted by the state-owned RIA news agency as saying: ‘As for Mr Johnson, we see him as the most active participant in the race to be anti-Russian. It will lead to a foreign policy dead end.’

But speaking in Brussels, Mr Johnson said he was no anti-Russian but ‘deeply hostile’ towards leader Vladimir Putin.

And he joked: ‘I think I’m probably the only Prime Minister in UK history to be called Boris, I think I have that distinction, and I’m not remotely anti-Russian.’

He became serious as he added: ‘But I think what we all agree is that what Vladimir Putin is doing, the way he’s leading Russia at the moment, is utterly catastrophic, that his invasion of Ukraine is inhuman and barbaric.

‘And the conduct of that invasion is now moving into the type of behaviour that, as I said before, we haven’t seen in the continent of Europe for 80 years, and it’s horrific.

‘So you can be sympathetic towards ordinary Russians, who are being so badly led, but you can be deeply hostile to the decisions of Vladimir Putin.’