The Prime Minister is reportedly ‘impressed’ with Ms Stratton who joined the Chancellor’s team as his director of communications earlier this year.

However, the former BBC and ITV News journalist has not formally applied for the position, according to The Times.

Number 10 is aiming to start the new daily televised press briefings in October with the recruitment process ongoing.

There are thought to be about half a dozen candidates in the frame for the role which is expected to come with a salary of more than £100,000.

A process of interviews and screen tests is expected to whittle the field down to two.

Mr Johnson will then be asked to choose who he wants to become the face and voice of the Government.

A Downing Street source told The Times: ‘There is going to be a full and proper process. We wouldn’t comment on any of the candidates.’ 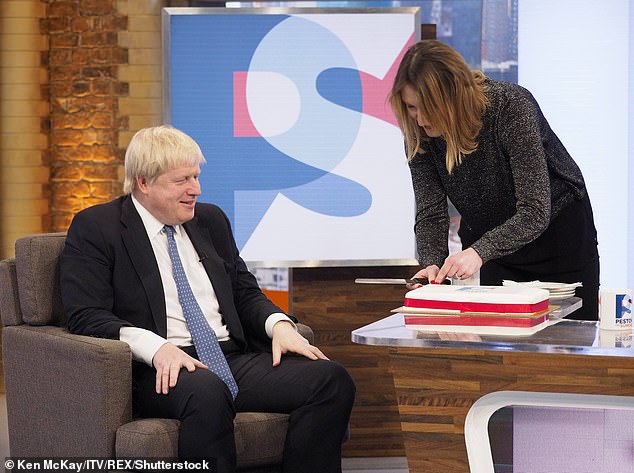 Ms Stratton, pictured on ITV with Mr Johnson in December 2016, is currently Rishi Sunak’s director of communications at the Treasury 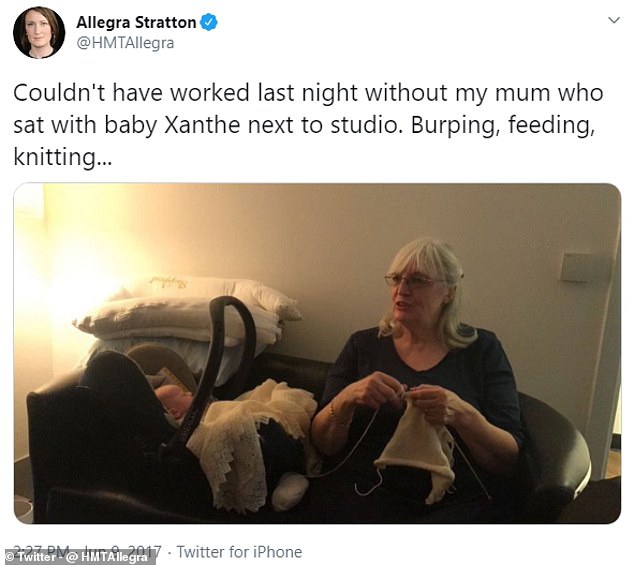 Ms Stratton, who joined the Treasury in April this year, went back to work at ITV six weeks after giving birth in 2017

Allegra Stratton is a former ITV journalist who has been Rishi Sunak’s director of strategic communications at the Treasury since this April.

But one senior minister told Politico: ‘Allegra is brilliant. There is no contest and no one else who could do it better.’

Ms Stratton left her role as co-presenter of the Peston on Sunday programme on ITV in April 2018 after two years in order to spend more time with her two young children, Vaughn and Xanthe.

She had reportedly returned to the show just six weeks after the birth of Xanthe in May 2017, initially taking her baby with her to work.

She also served as national editor at ITV News, a role she left in April this year in order to become Mr Sunak’s director of communications at the Treasury.

She has been credited with helping to boost the Chancellor’s public profile and increasing his popularity during the coronavirus crisis.

Downing Street’s plans to introduce the briefings suffered a set back at the end of August after it emerged that Sky News and the BBC may not always cover the events.

The UK’s two major broadcasters are expected to only show the briefings based ‘on merit’ which means they could cut away early or fail to show them at all if they are judged not to be newsworthy.

The decision to introduce the afternoon TV briefings was made by Number 10 as part of a bid to communicate more directly with voters.

The Government is keen to replicate the success of the daily Downing Street coronavirus press conferences which saw millions of people tune in for the latest updates.

The afternoon TV events will replace an existing off-camera press briefing currently carried out by the PM’s official spokesman.

A similar off-camera briefing which takes place in the morning will continue as normal.

The new briefings will take place in a revamped Number 9 Downing Street which is currently being turned into a media centre.