Boris Johnson today warned there is going to be ‘more of this wretched Covid still to come’ as he convened his Cabinet and told ministers ‘bit by bit’ the UK is ‘getting back on its feet’.

The Prime Minister told his top team that ‘we know there will be more outbreaks’ but he is ‘absolutely confident’ the Government will be able to deal with them.

He also claimed that ‘huge numbers’ of people are now returning to offices and ‘quite right too’ amid fears that Professor Chris Whitty could quit over the Government’s push to persuade workers to ditch working from home.

The Prime Minister will be hoping that the meeting, which came on the morning that Parliament returned from its summer break, will set an example to workers across the nation.

Mr Johnson is encouraging employees to head back to their offices but it was claimed today that ministers are holding back on the drive because of fears the Chief Medical Officer could resign.

Prof Whitty is said to be hampering the Government’s efforts to get more workers back to their normal commutes and to physically return to their workplaces.

Cabinet sources told The Telegraph ministers are afraid that if they push too hard on the issue, resulting in a wave of staff returning to town and city centres, then Prof Whitty could opt to resign because of safety fears.

Such a move would likely cause massive damage to public trust in the Government. 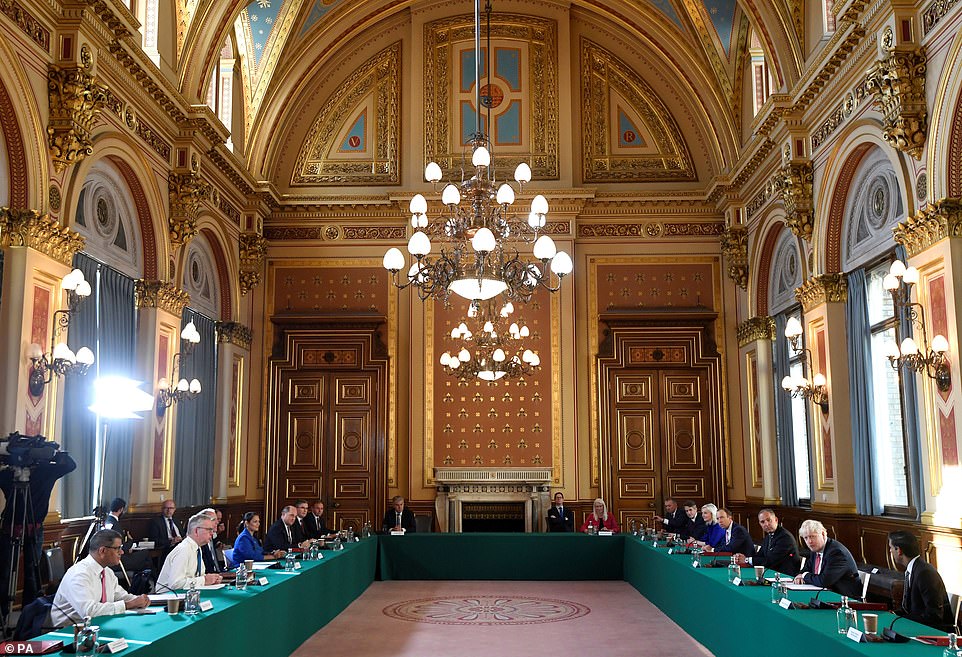 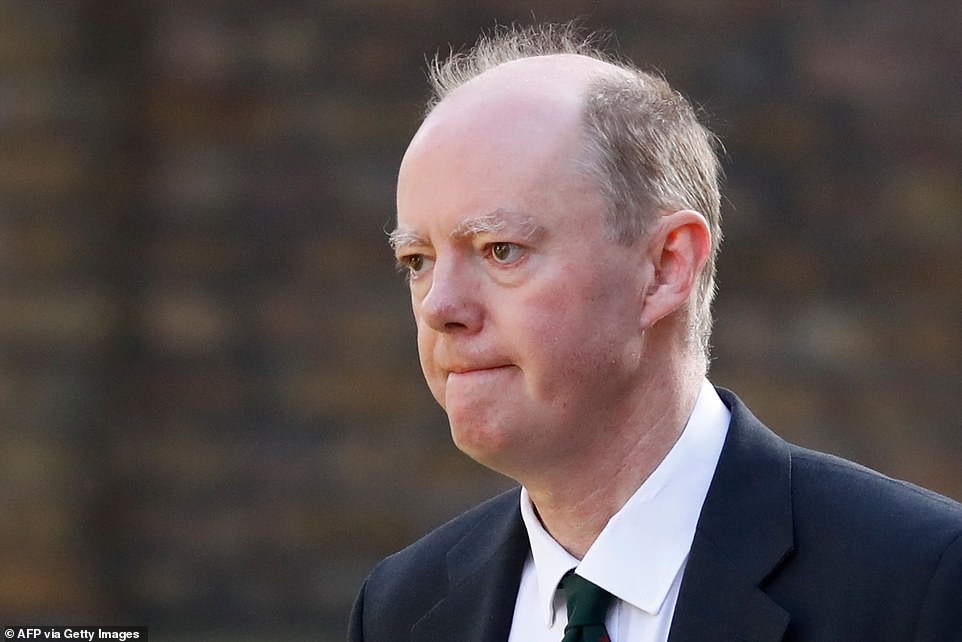 Parents tried to socially distance as they queued up outside schools across England and Wales today with their children as millions of pupils returned to classes from the coronavirus lockdown for the first time in six months.

Some blasted what they described as a ‘shambles’ at the gates this morning, while a newly-qualified teacher revealed his fear at being back in school with no personal protective equipment on his first day in the job.

One parent based in Bexley, South East London, tweeted a picture of crowds of parents and pupils at the school gates today, saying: ‘So much for social distancing when we arrived at school today.

‘My daughter has just started year three, never been to the school before and only met her teacher for a few seconds to arrive to this on her first day #whatashambles #absolutejoke #socialdistancing #sortitout.’

And Labour supporter Adam Woodward, 23, who is starting teaching at Horizon Community College in Barnsley, South Yorkshire, tweeted: ‘I’m about to begin my career as an NQT (newly qualified teacher) English teacher.

‘I will be teaching with no PPE, in an environment where social distancing is impossible. I am scared and so are the students. This Government has failed me and every child in every school. Shame on them.’

Britain’s rush hour started to get back to normal again today as the return to work following the coronavirus lockdown was stepped up – with more than 370 jams totalling 200 miles across London during rush hour.

Congestion levels on the roads in the capital were at 36 per cent at 8am today according to TomTom data, up from 31 per cent this time last week – which is a rise of five percentage points or 16 per cent (a sixth).

However, traffic congestion in London is still well below the average level of 67 per cent last year. Elsewhere, the figure in Birmingham was at 23 per cent at 8am, which was down from 25 per cent at the same time last week.

Meanwhile major train stations in the capital still appeared to be empty, with photographs taken during rush hour at the London terminals of Victoria, Waterloo and King’s Cross showing hardly anyone on the concourse.

Mr Johnson’s address to his Cabinet came as:

Mr Johnson told his ministers this morning: ‘People are going back to the office in huge numbers across our country and quite right too.

‘And though of course we know that there is still going to be more of this disease, this wretched Covid still to come, and although we know there will be more outbreaks, we are also absolutely confident that we are going to be able to deal with those outbreaks and bit by bit this incredible country is getting back on its feet and recovering from this crisis.’

The PM said there is ‘still going to be some turbulence ahead’ but that ‘if we continue the way that we have there will be calmer days, brighter days and calmer seas ahead of us’.

‘In the last few months we have been sailing into the teeth of a gale, there is no question,’ he said.

‘And sometimes it is necessary to tack here and there in response to the facts as they change, as the wind changes.

‘But we have been going steadily in the direction, in the course, that we set out. In that, we have not been blown off that course and that is thanks to you, the Government, but also overwhelmingly it is thanks to the efforts of the British people and the way they have come together, the way our whole country has come together to defeat the virus.’

The Chief Medical Officer has struck a cautious tone throughout the coronavirus pandemic, playing a key role in Downing Street press conferences.

He has previously warned that he believes social distancing will be required long into the future and ministers fear he could walk away from his role if he views the Government’s approach to the return to work as being too cavalier.

Prof Whitty said in July: ‘There are some things which we started right at the beginning, which absolutely have to continue for a prolonged period of time, washing hands, isolation, household isolation.

‘And these are issues of, and issues around distancing, which have been varied but the reality is distancing remains an important part of this mix and how it’s interpreted in different governments has evolved.

‘But it has not gone away. So, all of those need to continue for a long period of time.’

However, a Department of Health source rubbished the suggestion that Prof Whitty could quit, describing the claim as ‘a complete invention’.

‘Chris is not threatening to resign, and hasn’t threatened to resign,’ they said.

The Government is increasingly concerned that continued working from home will deal a lasting hammer blow to struggling businesses in town and city centres which are reliant on commuter footfall. 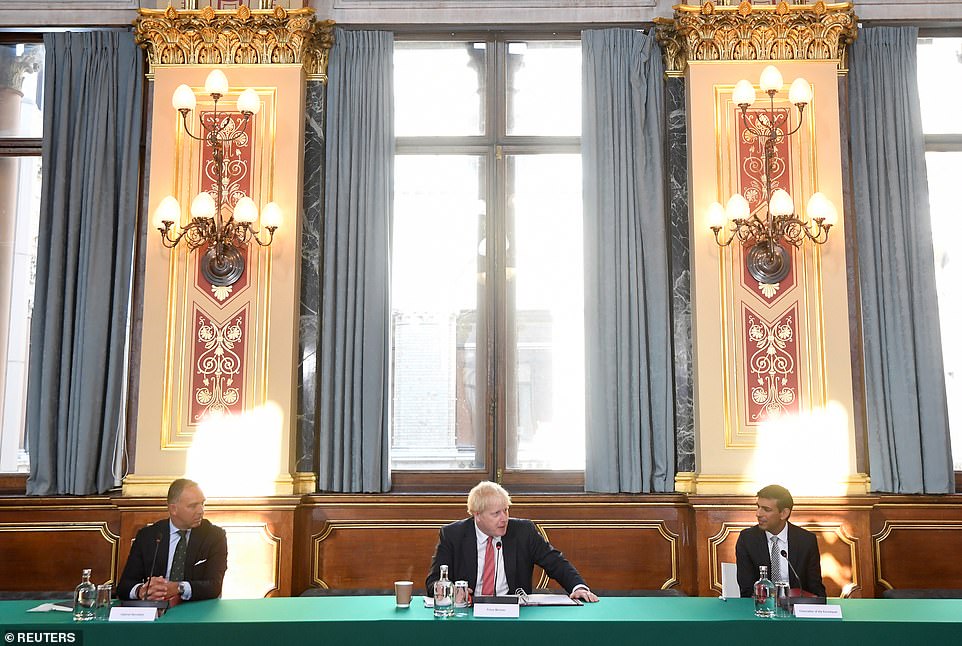 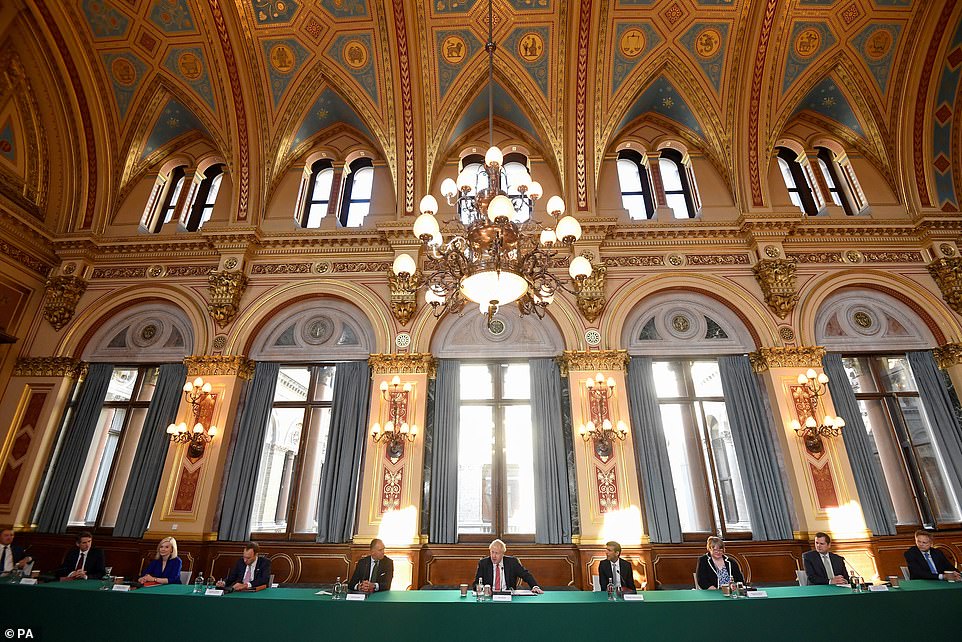 Staff working from home do nearly an extra hour a day, sending more emails and attending more meetings than when they are in the office, research shows.

Despite the Government’s desire for Britons to go back to work, people are spending 49 minutes longer at their desks each day – an extra four hours per week – according to a report by the National Bureau of Economic Research.

Before coronavirus started only 6 percent of us worked from home, compared to 43 percent of the population at the height of the outbreak in April, The Times reported.

Ninety percent of staff say they would like to continue working from home in some form or another, even if that means they have to work longer hours, while 70 percent claim that they’re more productive than they are in the office.

But despite claims that workers are kicking back in front of the telly with their laptops, researchers at Harvard and New York University found that staff are attending more meetings and sending more emails.

Nickie Aiken, Tory MP for Cities of London and Westminster, said as many as 50,000 people in the capital’s retail sector faced losing their jobs due to the lack of visitors.

She said the loss of international visitors had majorly impacted London’s economy.

Speaking to BBC Radio 4’s Today programme: ‘Almost half of the £10 billion annual spend in the West End is from overseas travellers and then the lack of office workers who have not been back at their desks since March, that has a huge effect on the overall turnover of West End shops and hospitality.

‘Between about 70-80 per cent – you’re basically looking at about 50,000 job losses retail job losses in West End retail alone.’

Ms Aiken said she suspected a ‘huge fall off in confidence’ regarding the perceived safety of public transport was partly behind the drop in shoppers, adding: ‘We’ve got to get that back, we’ve got to get businesses, the Mayor of London and Government to work together to provide that confidence to get people back in.’

Mr Johnson is encouraging staff to return but his efforts have risked being undermined by some of his ministers who have made comments which appeared to be at odds with the PM’s stance.

Environment Secretary George Eustice yesterday revealed no target has been set for the return of more civil servants to his Whitehall department.

He said that ‘we don’t have a target’ for the return of staff and that the priority is to ‘make sure that it is safe for people to return’.

Last week Health Secretary Matt Hancock suggested he did not care where his staff worked as long as they are productive.