Pausing to remove an errant dab of pink lipstick at the corner of her mouth, she checked her reflection in the lobby mirror. Then, furtively, she glanced out of the hotel’s side entrance and caught a glimpse of the waiting paparazzi.

At this stage, it would have been easy to slip out of the side door unnoticed.

But if anyone thought Boris Johnson’s pole-dancing, rumoured ‘lover’ Jennifer Arcuri was going to make a discreet exit from the Royal Horseguards Hotel on Friday morning they could think again.

With a defiant toss of her tumbling blonde mane, she adjusted her movie-star dark shades (despite the gathering rainclouds) and clacked across the marble lobby floor in her £800 gold-embossed Ferragamo boots.

Then, head held high, she strode out of the front door to the delight of waiting photographers and continued posing and smiling during the short walk to her meeting in Whitehall which, conveniently, saw her strut past the gates of Downing Street.

Arcuri has privately told friends in the US that she has ‘loathed’ the attention the scandal has brought to her family and was forced to leave her rented home for a while because of the paparazzi attention. But last night an eyewitness told The Mail on Sunday: ‘This is a woman who wanted to be noticed. She could have sneaked out of the side door and no-one would have been any the wiser. Instead, every eye was on her.’ 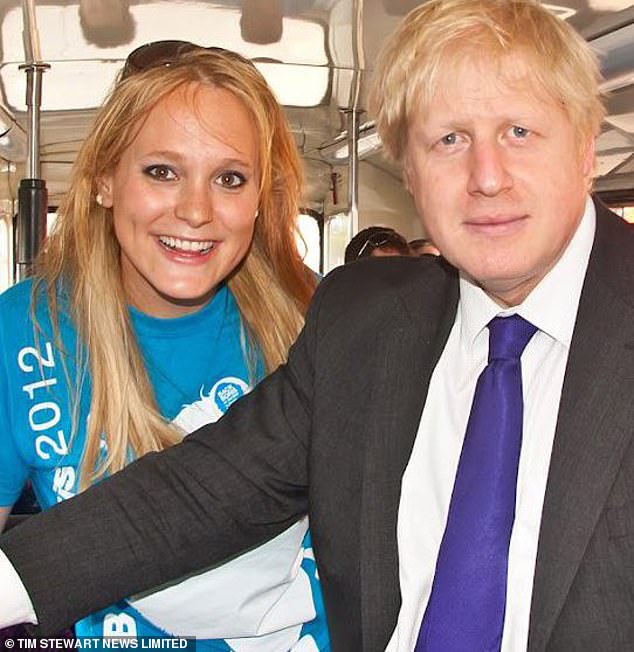 Ms Arcuri, 34, who styles herself as the PM’s former ‘tech adviser’. Pictured with Boris Johnson on his mayoral campaign in 2012

While no one can know what the Prime Minister and his girlfriend Carrie Symonds think of the fact his alleged one-time paramour is now ensconced in a five-star hotel a stone’s throw from No 10, one thing is abundantly clear. The Jennifer Arcuri circus has hit town, with an ITV documentary tonight, ‘Exposure: When Boris met Jennifer’ allowing her to air explosive allegations about her relationship with the Prime Minister. Plugging the show, in typically self-effacing style, she told reporters it was called ‘When Jennifer met Boris’.

The Mail on Sunday watched the drama unfold as the Californian mother-of-one arrived in London for a series of meetings and public appearances which, one LA friend says, ‘are solely aimed at furthering the career of Jennifer Arcuri’.

At 8.50am on Friday, Ms Arcuri, dressed in black trousers and a frilly white blouse, sat down for coffee and croissants with a cyber security expert under the magnificent crystal chandeliers in the hotel’s dining room.

An onlooker said: ‘She was telling her companion in a very loud voice about possibly appearing on the Victoria Derbyshire show, before discussing how she wanted to come across. At one point she said loudly, “I don’t wanna be too American.” ’

By this stage someone – perhaps Ms Arcuri’s representatives – had tipped off the Press. A crowd of photographers and camera crews gathered outside.

After finishing her croissant, Ms Arcuri disappeared to her room before emerging ten minutes later, make-up touched-up to perfection, wearing a dramatic fur-trimmed cape. At this point she looked out of the side entrance.

The witness said: ‘I thought she’d spotted the paparazzi and was ready to leave through the side door. In fact, she had exactly the opposite in mind. She looked in the mirror, dabbed her lipstick, adjusted her sunglasses, nodded at her male friend and then sashayed through the lobby and gave the waiting photographers the shot they were waiting for. ‘She acted more like a movie star than someone embroiled in a political scandal.’

Lest anyone forget, Ms Arcuri, 34, who styles herself as the PM’s former ‘tech adviser’, received £11,500 in sponsorship from a mayoral organisation when Mr Johnson was Mayor of London, a further £15,000 Government grant for foreign entrepreneurs in Britain and her company Hacker House was awarded another £100,000 grant by the Department for Culture, Media and Sport in January.

The PM denies any impropriety in the awarding of funds during his time as London mayor, saying all proper procedures were followed.

As she posed for the cameras on Friday, she was on her way to a 90-minute meeting at the DCMS.

It is thought Ms Arcuri is preparing for a ‘return match’ on Good Morning Britain with this newspaper’s columnist Piers Morgan, who famously asked her nine times if she had an affair with the PM, a question she refused to answer when she appeared on his show last month, claiming she would not allow others to ‘weaponise’ her answer.

On Friday, Ms Arcuri joked with reporters about ‘popping in’ to No 10 and implied her visit during the Election campaign was coincidental. But one source told the MoS that Arcuri has meetings planned with ‘high ranking’ Conservative bosses and may even meet members of the Labour Party.

‘The reality is that Jennifer feels scorned by Boris. He hasn’t reached out to her since the scandal erupted,’ an LA-based friend explained. ‘Clearly the Tories are nervous and Labour will try to exploit this as much as they can.

‘He [Boris] is supposed to be sending someone very high up in his camp to meet with her while she’s in the UK. But she’s also saying she will meet up with Labour MPs.

‘When it comes down to it, this is all about furthering the career of Jennifer Arcuri.’

September 22: The Sunday Times reports that Labour MP Jon Trickett wants Prime Minister Boris Johnson to explain the allegation that he failed to declare potential conflicts of interest while London mayor in relation to the allocation of public money to Ms Arcuri.

Members of the London Assembly give the PM a two-week deadline to provide “details and a timeline of all contact with Jennifer Arcuri including social, personal and professional during his period of office as mayor of London”.

September 26: Conservative Party chairman James Cleverly hints that Mr Johnson could refuse to appear before the London Assembly to explain links to the American businesswoman.

September 27: The Prime Minister says he will comply with a London Assembly order to explain his links to Ms Arcuri.

He is referred to the Independent Office for Police Conduct (IOPC) to assess whether he should be investigated for the criminal offence of misconduct in public office while he was mayor of London.

September 28: Mr Johnson arrives at the Tory Party conference in Manchester after being referred to the police watchdog, a move Downing Street calls a “nakedly political put-up job”.

September 29: The Sunday Times reports that Ms Arcuri had told four friends she had an affair with Mr Johnson while he was London mayor. The Prime Minister tells Andrew Marr he had no interest to declare.

September 30: Mr Johnson insists allegations over his private life, including his links to Ms Arcuri and the allegation he squeezed the thigh of a female journalist, will not overshadow the Tory Party conference.

October 1: The Prime Minister tells LBC radio that allegations over his personal life had only come out because of some people’s intent to “frustrate” Brexit.

October 3: Ms Arcuri tells the Daily Mail she had “every right” to go on trade missions with Mr Johnson. She calls all the allegations false, saying she is a “legitimate businesswoman”.

October 6: The Sunday Times reports that leaked emails showed that Ms Arcuri had listed Mr Johnson as a reference in her application for a role in Tech City.

October 7: Ms Arcuri appears on ITV’s Good Morning Britain and refuses to deny she had an affair with Mr Johnson. She says the politician had visited her Shoreditch flat a “handful” of times and called him “a really good friend”, but denied he ever showed her favouritism. Refusing to answer questions about the nature of her relationship with the then mayor of London, she said: “It’s really not anyone’s business what private life we had.”

October 8: Mr Johnson fails to meet the deadline to respond to questions by the London Assembly over his relationship with Ms Arcuri. The two-week deadline expired at 6pm without a response, the assembly said.

October 9: The London Assembly says it has received a response through Mr Johnson’s solicitors that it was asked not to publish. But it says it saw nothing in the submitted papers that “reflects the need for confidentiality”.

October 10: The London Assembly asks Mr Johnson to explain by October 21 why his response to a probe into his links to Ms Arcuri should be kept confidential.

October 16: The London Assembly pauses its probe into Mr Johnson and Ms Arcuri’s relationship following a request from the Independent Office for Police Conduct. The police watchdog said it was “acquiring material” to determine whether the matter should be criminally investigated and asked the committee to “give precedence” to its inquiry.

October 31: A £100,000 grant awarded to Ms Arcuri’s Hacker House firm is considered “appropriate” following a review by the Government Internal Audit Agency. The Department for Digital, Culture, Media & Sport provided Ms Arcuri’s company with the money after she applied for £273,000 in October 2018 under the Cyber Skills Immediate Impact Fund.

November 17: Ms Arcuri appears on ITV Exposure and says she wished Mr Johnson had declared their relationship as a potential conflict of interest so she could avoid the “humiliation” she has faced. She claims Mr Johnson cast her aside as though she was a “gremlin” after she tried to contact him for advice on how to handle the media attention.