Jeremy Hunt last night said the UK needed a ‘trustworthy’ PM as he responded to Boris Johnson’s challenge to match his ‘do or die’ pledge to get Britain out of the EU by Halloween.

Ramping up his rhetoric on Brexit, Mr Johnson even suggested he would resign as PM if Britain is still a member of the European bloc on November 1.

In an open letter to his leadership rival, he challenged Mr Hunt to match his commitment, warning that failure to deliver Brexit on time would have ‘devastating’ consequences for both the Tories and the country.

He wrote: ‘The central question in this leadership contest is whether the next prime minister agrees to honour the referendum result and commits to leaving the EU on 31 October. If we fail to deliver once again, the consequences for our party and our country will be devastating. 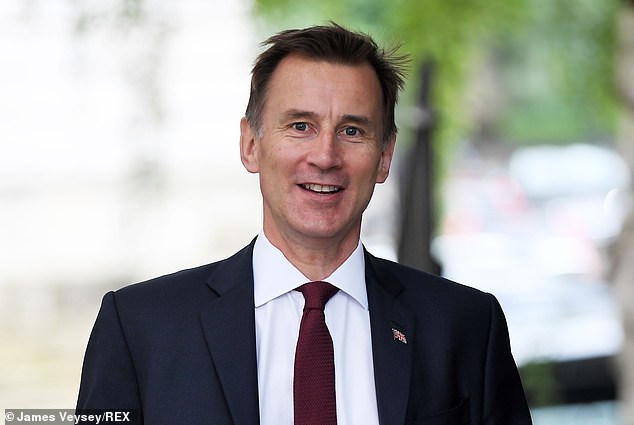 Responding to the ‘do or die’ challenge, Mr Hunt (pictured in Downing Street yesterday) called the October 31 date a ‘fake deadline’

‘We must not kick the can down the road again. The British people have had enough of being left in limbo. So both of us have a responsibility to provide clarity on exactly when we believe the UK should leave the EU.’

My hobby? I paint model buses

First he brought back the Routemaster to London’s streets, and then there was his infamous £350million Brexit bus – and yesterday Boris Johnson’s love affair with public transport took a surprising new twist.

The Tory leadership frontrunner revealed the hobby that keeps him busy in his spare time – crafting wooden wine crates into model buses.

He said he likes to relax by painting passengers ‘enjoying themselves’ on the sides of the crates.

Asked about his hobbies on Talk Radio, Mr Johnson replied: ‘I like to paint or I make things. I get old wooden crates, and I paint them. I suppose it’s a box that’s been used to contain two wine bottles. It will have a dividing thing, and I turn it into a bus. I paint the passengers enjoying themselves on the wonderful bus. Low carbon, of a kind that we brought to the streets of London that reduces CO2, reduces nitrous oxide, reducing pollution.’

It was revealed earlier this month that Mr Johnson enjoys spending the evening painting with his partner, Carrie Symonds, and some of the couple’s paintings hang on the walls of her flat in south London.

Mr Johnson’s Brexit bus introduced the discredited claim that leaving the EU could lead to £350million more a week being spent on the NHS.

Mr Johnson said he was ready to take the UK out on time ‘do or die, come what may’ – and even suggested he could quit if he failed to deliver on his central pledge.

Asked directly whether he would resign if he failed to get Britain out on time, he replied: ‘I think that follows from everything that I’ve said – I think politics is at a crossroads in this country. And it is fundamental to trust in politics that we come out of the EU.’

Responding to the ‘do or die’ challenge, Mr Hunt called the October 31 date a ‘fake deadline’ that could ‘trip us into a general election and hand the keys to Jeremy Corbyn and we will have no Brexit at all’. He said that while he was prepared to leave without a deal on that date, he would not pursue No Deal if there was ‘a prospect of a better deal’ within reach.

He also declared the next PM needs to be someone trustworthy or the country risks a general election and no Brexit. In a swipe at Mr Johnson, the Tory leadership hopeful argued the ability to negotiate a better Brexit deal ‘is about the personality of the prime minister’. Mr Hunt made the jab as he revealed how he has wanted to be prime minister for 30 years.

In an interview with the BBC, he said that both he and Mr Johnson wanted to get changes to the agreement negotiated by Theresa May.

But he said: ‘The judgment is, who is the person we trust as PM to go to Brussels and bring back that deal?’

‘It’s about the personality of our PM. If you choose someone where there’s no trust, there’s going to be no negotiation, no deal. And quite possibly a general election which could mean we have no Brexit either.’ When asked whether he was implying that Mr Johnson was untrustworthy, Mr Hunt insisted he would ‘never’ make those comments about a fellow candidate. 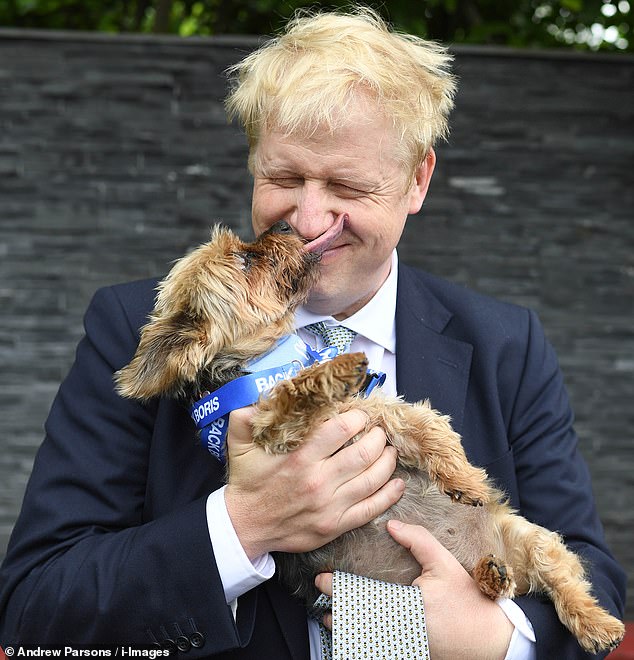 We’ve got this licked: Boris Johnson hold Lucky the dog on a visit to the Surrey Hills yesterday amid concerns over the Tory frontrunner’s campaign strategy

‘No, I’m saying I am trustworthy and I believe that I can be trusted to deliver that deal,’ he added. ‘But obviously members of the Conservative Party need to make their choice about who will come back with that deal.’

Mr Hunt claimed that he had never thought Mrs May’s deal, which included the controversial backstop to avoid a hard border on the island of Ireland, was the right approach.

‘What Theresa May tried to do was a deal involving the backstop,’ he said. ‘I was in Cabinet at the time and I supported her loyally, but I never thought that was the right approach. What I’m talking about is a deal that doesn’t involve the backstop as it’s constituted, so it would be different.’

On his ambitions to be prime minister, Mr Hunt said he had been ‘waiting for this moment for 30 years of my life’.

‘I have been sitting around that Cabinet table thinking how I want to transform our country,’ he added.

Boris presses the panic button: Tory frontrunner brings in Iain Duncan Smith as new campaign chief and hits the road to seize initiative back from Hunt

In a surprise move, the former Tory leader was appointed as Mr Johnson’s campaign chairman with the task of steering him into 10 Downing Street next month.

Sources told the Daily Mail that Mr Duncan Smith has been given a wide-ranging role in which he will also advise Mr Johnson on the make-up of his No 10 team and on planning for his first 100 days, during which he has pledged to deliver Brexit.

The appointment came amid growing divisions within the Johnson camp about a strategy that has allowed Jeremy Hunt to seize the initiative in recent days.

Former minister James Wharton and former defence secretary Gavin Williamson, who masterminded Mr Johnson’s success in the first round of the contest, have both been moved aside.

Instead, Mr Duncan Smith will now be responsible for setting campaign strategy, assisted by Mark Fullbrook, an associate of Australian campaign strategist Sir Lynton Crosby, who has been offering Mr Johnson informal advice for weeks.

Mr Johnson’s campaign to succeed Theresa May was rocked on Friday when it emerged neighbours had called the police after hearing his 31-year-old girlfriend Carrie Symonds scream ‘get off me’ and ‘get out of my flat’ during a midnight row.

In the following 48 hours, Mr Johnson’s team was forced on to the back foot as he resisted pressure to offer an explanation for the blazing argument. At that point, Mr Johnson called Mr Duncan Smith to ask him to take charge. 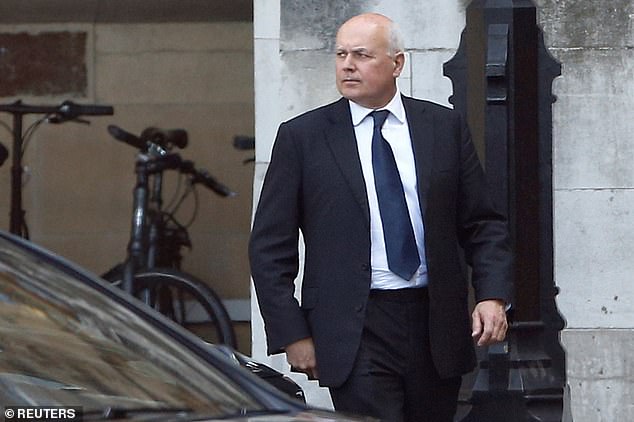 Mr Johnson yesterday dismissed claims that his campaign was in crisis, telling reporters: ‘I think that question is beyond satire. We’re out campaigning and we’re getting a fantastic response.’

But insiders yesterday acknowledged that he had lost momentum in the wake of revelations about his domestic row.

One said: ‘I don’t think anyone would deny it’s been a bumpy few days. The transition from the parliamentary campaign, which was a great success, to the campaign in the country has proved to be harder than people thought. We need to reach a different audience now.’

Another senior figure on the team said: ‘It is not a question of panic, but we do need to get this thing back on track.

‘There is time to do it, but there is not time to waste. The incident at the weekend knocked things off course. There wasn’t really a plan for dealing with it.’ 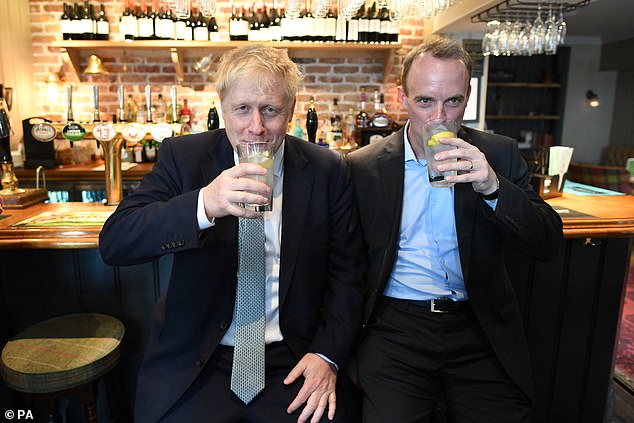 Thirsty work: Mr Johnson has a drink in Oxshott, Surrey, with former leadership rival Dominic Raab who was eliminated from the contest at an earlier round

One source yesterday insisted that Mr Wharton, who has held the post of campaign manager since the start, would remain closely involved in strategy.

But Mr Duncan Smith’s appointment led to an immediate change of gear yesterday, with Mr Johnson toughening his rhetoric on Brexit and breaking free from the ‘submarine’ strategy that saw him fight shy of the media in the first phase of his bid for the leadership.

£1million earnings in a year

In the year since he quit as foreign secretary, Boris Johnson has earned more than £1 million, the Daily Mail can reveal.

The Tory leadership frontrunner has pocketed the huge sum by making a string of lucrative speeches, penning newspaper articles and royalties from various books.

He has also been given hundreds of thousands in donations from political supporters. Since early July 2018, when he resigned as foreign secretary, Mr Johnson has received £1,020,861 in earnings, gifts, donations and loans.

For his weekly column in The Daily Telegraph, Mr Johnson has received £275,000, and he has earned £400,000 for making just eight speeches. The most lucrative was at Living Media India in New Delhi, for which he was paid £122,900.

He is said to have been stung by Mr Hunt taunting him as a ‘coward’ for avoiding TV debates and interviews. Having previously agreed to just one broadcast interview since Mrs May announced she was stepping down, Mr Johnson has now conducted three in 24 hours, as well as carrying out a number of carefully controlled campaign events.

During a visit to Oxshott in Surrey yesterday he was joined by former Brexit secretary and leadership rival Dominic Raab, who is now one of his supporters.

Although he was still dogged by questions about his row with Miss Symonds, and claims that a photograph of the couple gazing lovingly at each other was staged, the interviews have also given him the opportunity to push his message that he is the only candidate who can be trusted to get Britain out of the EU by October 31.

Yesterday, he challenged Mr Hunt to match his ‘do or die’ pledge to deliver Brexit on time.

Mr Duncan Smith is said to have advised Mr Johnson that he needed to get out in public and remind Tory activists why they wanted him to lead the country in the first place.

A source said: ‘Iain’s very clear view is that we need to get Boris out more. It is no good being defensive – it just doesn’t suit him. We need to play to his strengths.

‘Boris now needs to breathe some fresh air into the campaign, and show the party he is the only one who can deliver Brexit and consign Corbyn to the dustbin of history.’ 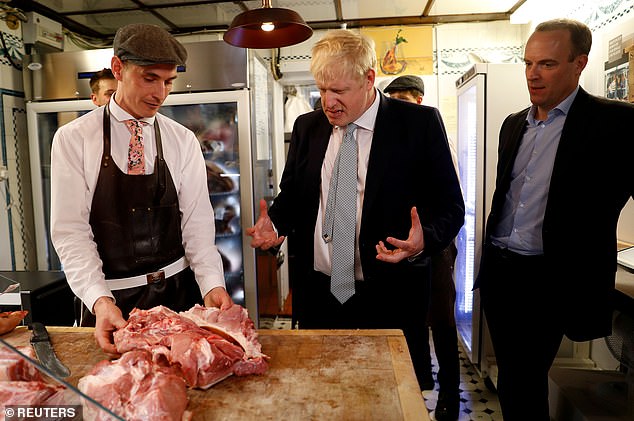 Mr Duncan Smith’s appointment appears to scotch claims by pro-Remain supporters of Mr Johnson that he is a ‘malleable’ figure who might be persuaded, once he is in office, to pursue a softer line on Brexit. Mr Duncan Smith’s term as Tory leader was characterised by infighting and ended after just two years.

However, he remains a popular figure with grassroots activists, and friends say he has an ‘instinctive’ feel for the views of party members.

The appointment of Mr Fullbrook is also likely to raise eyebrows following his involvement in Zac Goldsmith’s failed campaign for London mayor.

Footage also emerged yesterday of Mr Johnson at a garden party with Tory activists in Sutton Coldfield in the West Midlands at which he appeared to hint he is gearing up for an early election.

He said his plan was to ‘get Brexit done, relaunch our party as the party of modern progressive conservatism and then get ready to wallop Jeremy Corbyn’.