Boris Johnson is plotting to hold an early general election once Brexit gets over the line so that he can face off against Labour ‘while Jeremy Corbyn is still around’, it has been claimed.

The Tory frontrunner, who will enter Number 10 next week if he defeats Jeremy Hunt in the leadership race, is said to have told aides to prepare for an election as early as next summer.

The next election is not due until 2022, but the government’s instability over recent months has prompted frequent speculation of an early poll.

Speaking to The Times, Boris aides said the Tories wanted to exploit the ‘groundwork’ they had already done for a campaign against Mr Corbyn.

‘There’s a desire to get this done while Corbyn is still around. Labour is utterly divided Brexit is killing them,’ one insider told the newspaper.

‘Labour is in no fit state to fight a general election.’

Mr Corbyn, who turned 70 earlier this year, has not shown any sign that he intends to stand down as Labour leader.

However, he has been under growing pressure after a disastrous performance in May’s European Parliament elections in which Labour fell to third behind the Liberal Democrats.

Many of his party colleagues have urged him to give his full-throated backing to Remainer demands for a second referendum to cancel Brexit.

Mr Corbyn has inched ever closer to that position but his party’s policy still allows for the possibility of leaving with a Labour-negotiated deal.

Mr Johnson’s team are reported to be under instructions to make sure the Tories are on an ‘election footing’ once Britain has left the EU.

They are said to regard Mr Corbyn’s beleaguered leadership as a ‘positive’ for the Conservatives in any campaign. 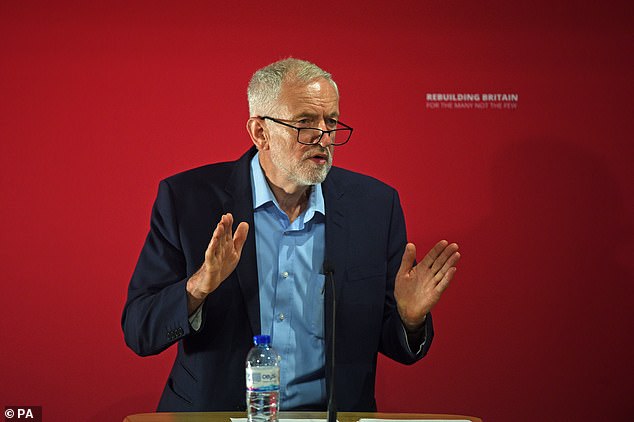 However, they will be wary of what happened in 2017, when Theresa May hoped to cash in on a huge poll lead at a snap election – only for Mr Corbyn’s standing to surge during the campaign.

Even if a new PM does not seek an early election, it could take place anyway if the government loses a vote of no confidence.

Yesterday Tory MP Dominic Grieve warned that he would vote against his own party in a confidence motion if the new PM was pursuing a No Deal Brexit.

The government currently has no majority and relies on Northern Ireland’s DUP to survive key parliamentary votes.

The Boris campaign has refused to rule out the controversial step of proroguing Parliament in order to stop MPs blocking No Deal.

Nigel Farage has threatened to unleash his Brexit Party on the Tories at a general election – after he relegated them to fifth in May’s EU elections – sparking Conservative fears over what would happen if a poll took place before Brexit is delivered.

Recent Westminster polling has shown Mr Farage’s party only a few points behind the Conservatives and Labour.

Mr Johnson’s rival for the Tory leadership, Jeremy Hunt, has said he does not want an election before October 31, when Britain is due to leave.