A group of bouncers have been sacked after shocking footage emerged of them restraining and battering an unconscious man outside a popular nightspot.

Shocking footage shows the bouncers holding a man, who was laying motionless on the floor, while two other doorman took turns to land punches.

The incident, which took place outside a Players Bar in Birmingham Monday 23, saw the security staff dismissed by their external contractor. 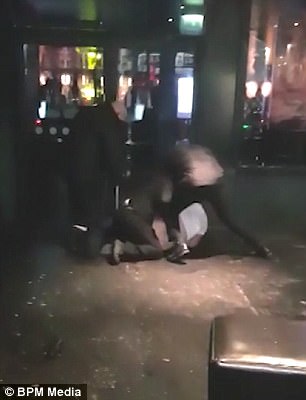 The footage was recorded by a witness who can be heard identifying them as body guards in Players.

‘It was a lot worse than the video suggests, one of them stamped on his head, it was horrible to see,’ a witness told the Birmingham Mail.

‘He wasn’t fighting back so they pushed him to the floor, then they started nailing him, three of them on top of him.

‘You can see two of them hitting him and one’s just holding him, he looks like he’s not there to be honest.’

The man, who previously worked as a doorman, added: ‘In the pubs that I’ve worked for, I’ve never seen anyone beat someone the way they beat him.’

The witness claimed one of the bouncers involved took his phone and kicked it across the street after he was spotted making the recording.

After retrieving it, the witness continued trying to film. ‘The video we got was when we went back and they were carrying on beating him, beating him even more,’ he said. 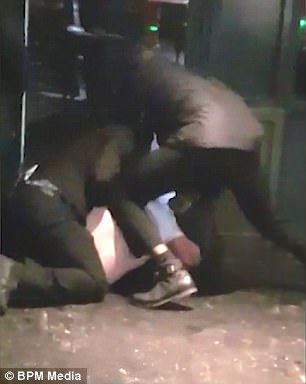 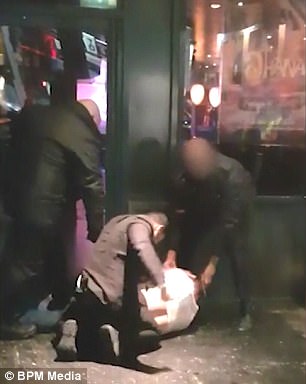 The incident, which took place outside a Players Bar in Birmingham Monday 23, saw the security staff dismissed by their external contractor

Police and ambulance services were not called to the scene as the witness claimed the man was put in a taxi by him and his friend after the incident.

Operations director for Players Bar, Shaun Jenkinson, confirmed the bouncers worked for an external security firm and had been sacked.

He said: ‘We have viewed the CCTV footage of the whole incident, which lasts over five minutes, including the fracas leading up to the mobile footage received.

‘It involves a member of the public and an external security company, which occurred outside our premises on Broad Street and spilled into our smoking area.

‘We have reported the incident to Professional Security UK Ltd, who were the company involved in the incident and they have agreed to terminate the contracts of the employees involved.

‘Players Bar Group and the Birmingham branch will continue to ensure that the safety of the public is priority in all of our venues and the surrounding areas.’