When the goal finally came, it was alarming in its simplicity. Alvaro Morata held the ball up superbly, as he did all evening along, ghosted away from a couple of defenders and pitched a pass into the left channel.

Eden Hazard gave chase, Simon Francis tumbled over in hot pursuit, and the Belgian fired the ball through Asmir Begovic and into the goal.

For Chelsea manager Antonio Conte, a surge of relief. This had been a reasonable enough away performance but for 51 minutes, a sense of frustration grew as Chelsea spurned a catalogue of openings. 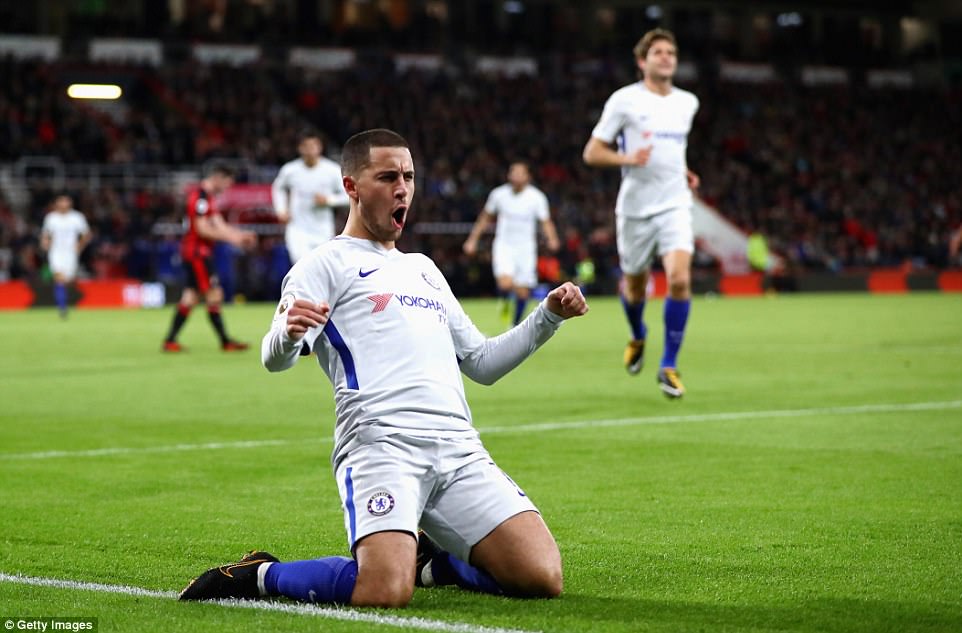 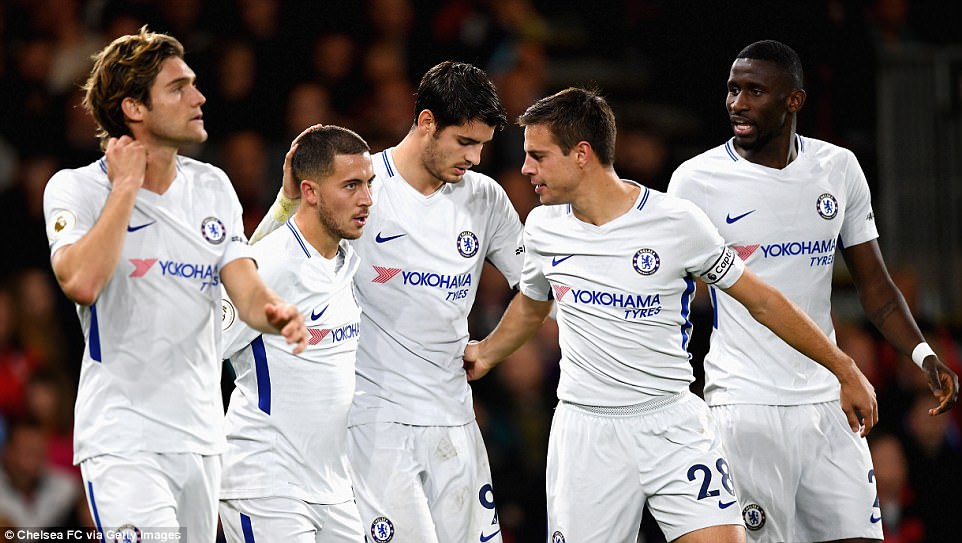 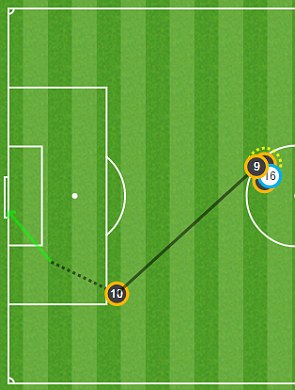 Eden Hazard fires Chelsea ahead in the second-half. CLICK HERE for more from MATCH ZONE

Conte responded to Hazard’s strike by throwing his arms out in celebration but his thoughts immediately turned. He pointed his index fingers towards his head and told his players to concentrate.

If Chelsea retain the merest aspirations of defending their crown, this was a game they dare not lose. Indeed, as Conte suggested, they could barely afford a draw.

As Chelsea’s team coach pulled into the south coast, the players were firmly aware that they sat 12 points behind Manchester City. Jose Mourinho’s Manchester United were seven ahead and the former Chelsea manager returns to Stamford Bridge next week.

The prospect of Mourinho repeating his shush gesture and tearing the blue ribbons off the Premier League trophy should be motivation enough for that Bonfire Night clash. Here, at least, Chelsea ensured their ambitions remain relevant for next week’s duel.

Chelsea started this game with purpose. Their passing was crisp and their build-up play well thought-out, if a little ponderous at times. Yet Chelsea’s dominance was such Conte’s side could have been home and dry by the half-time whistle.

Instead, an exasperating period for Conte saw Chelsea denied first by their own carelessness, then by the assistant referee’s errant judgement and finally by the courage of the Bournemouth goalkeeper Begovic. 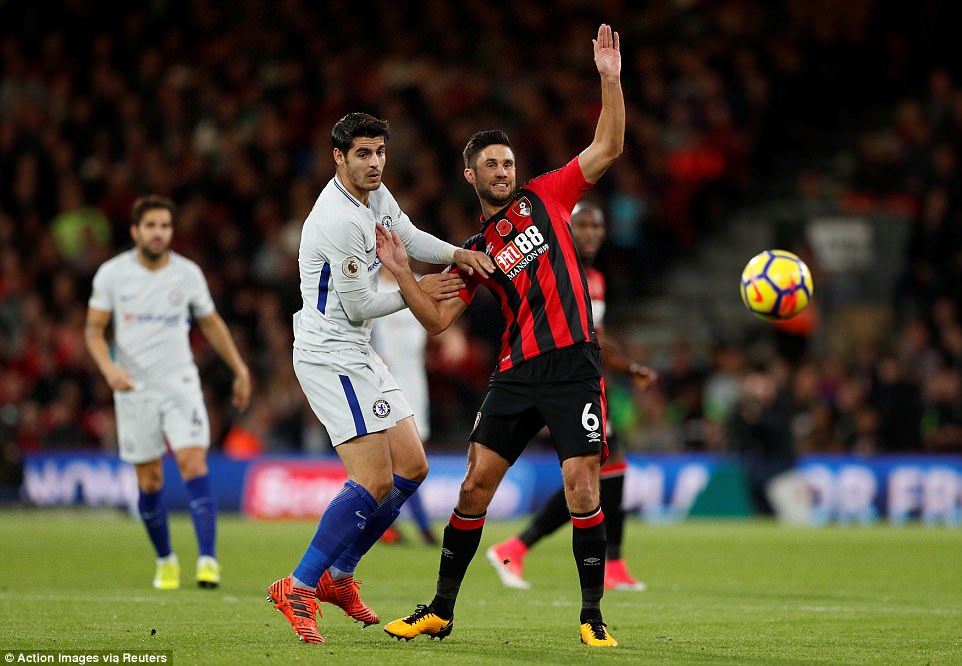 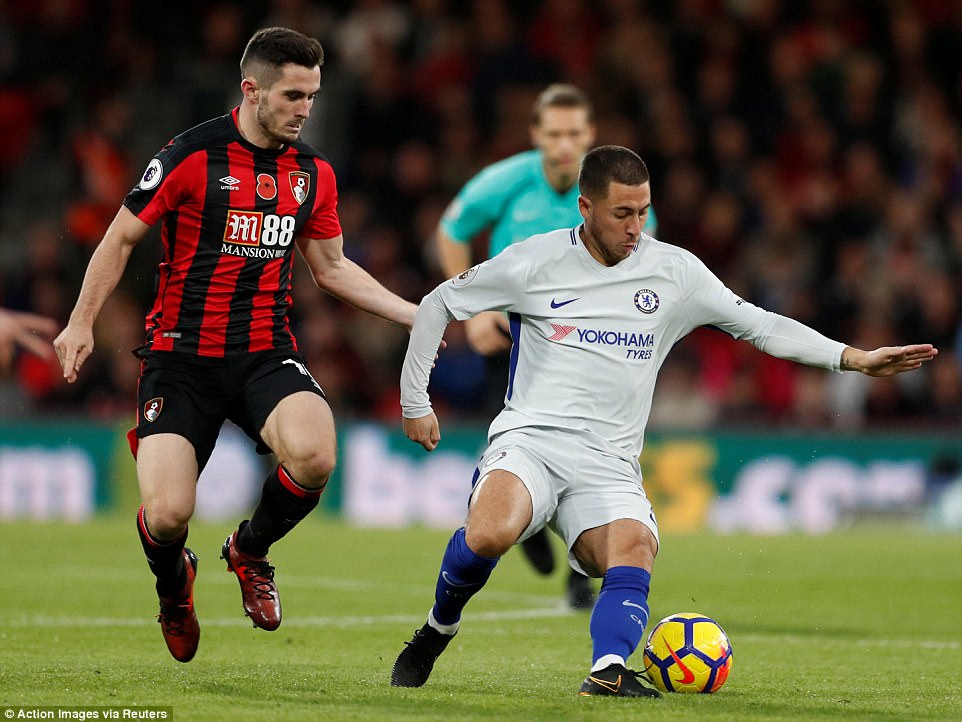 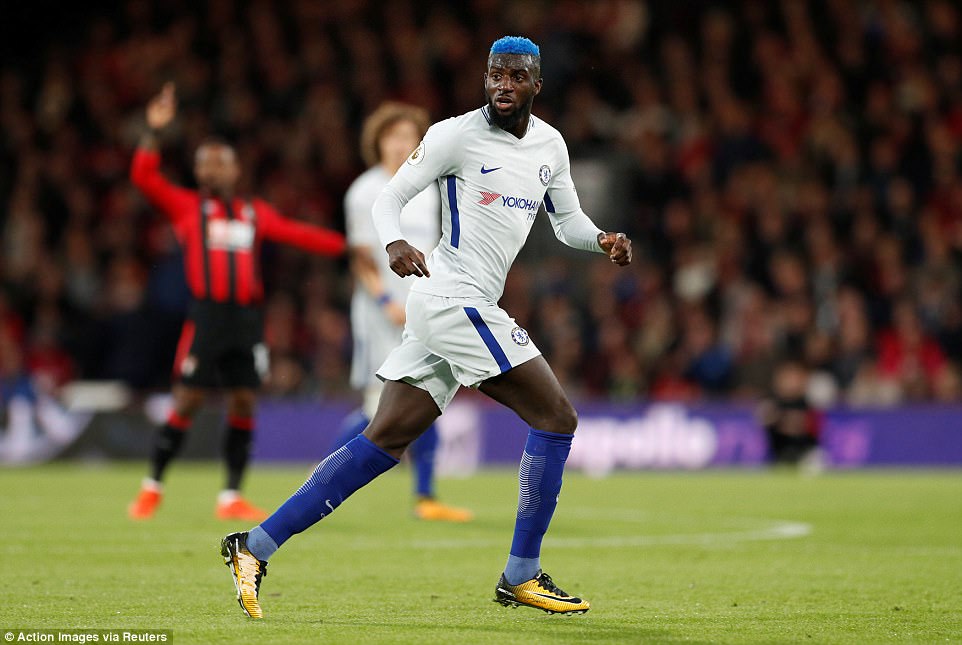 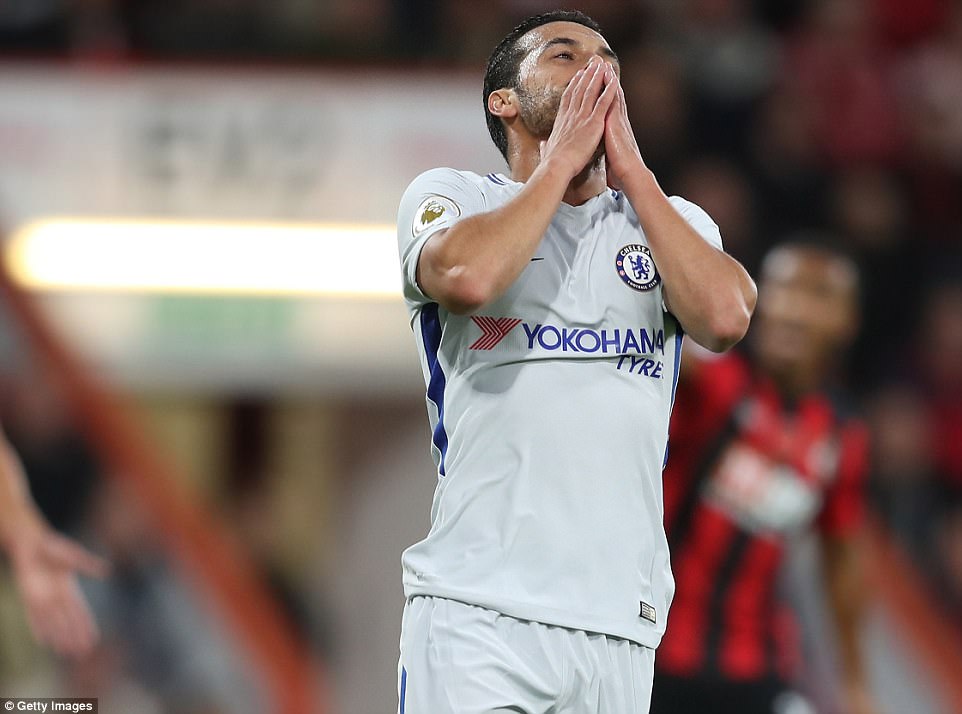 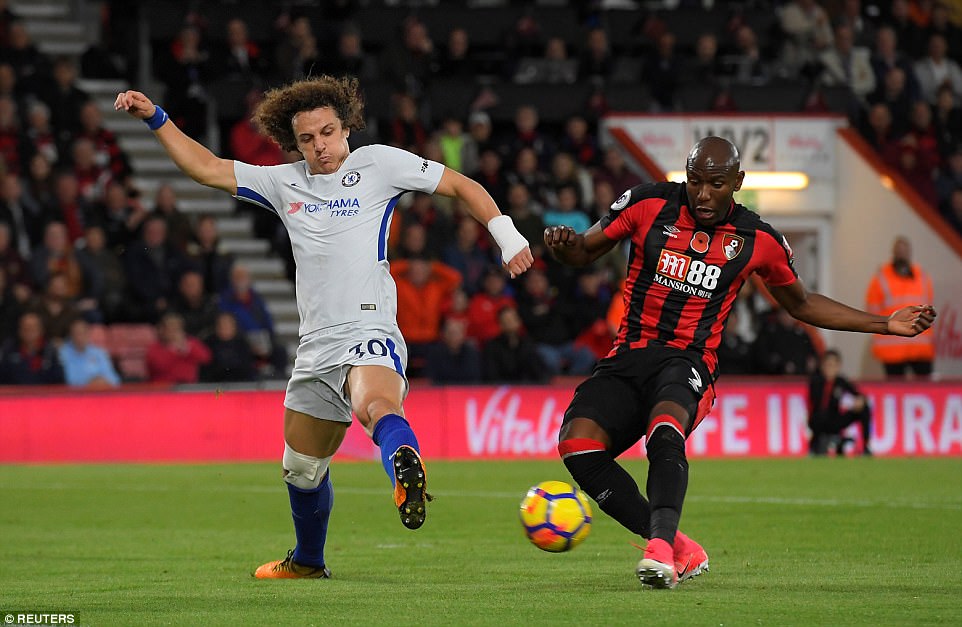 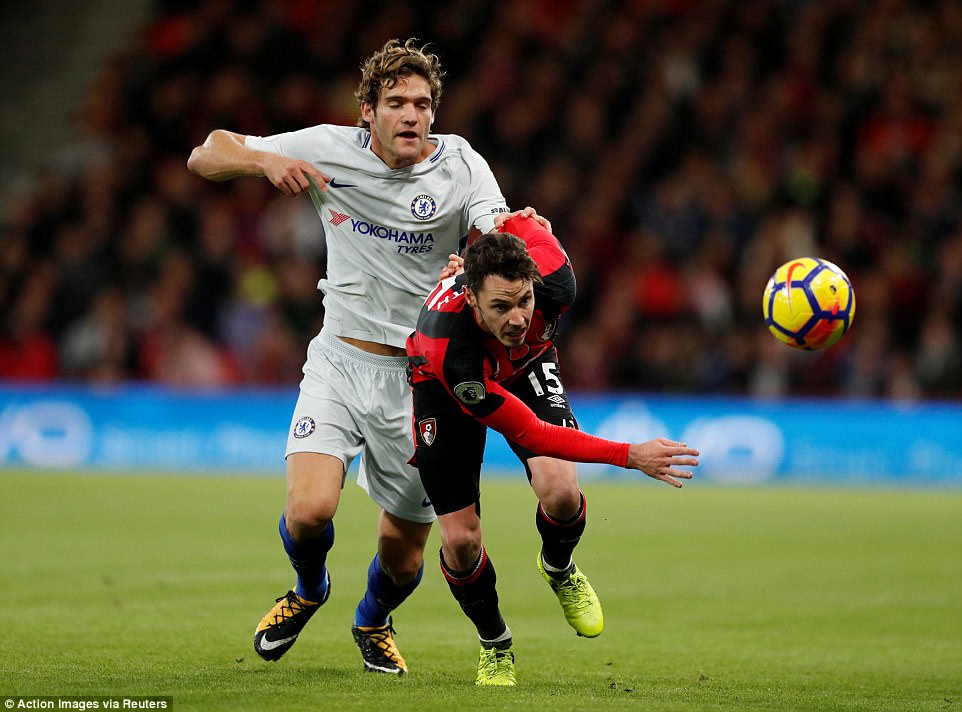 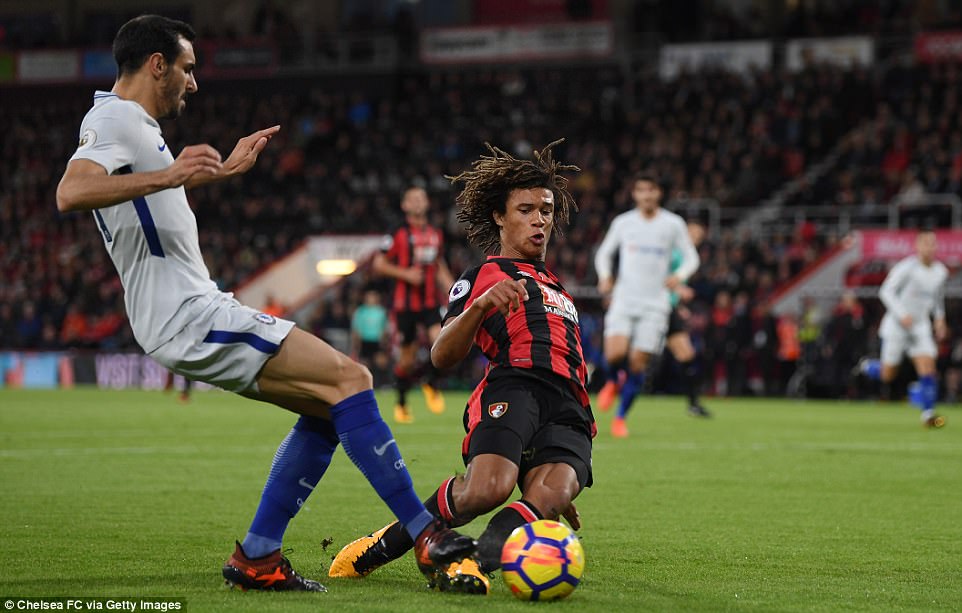 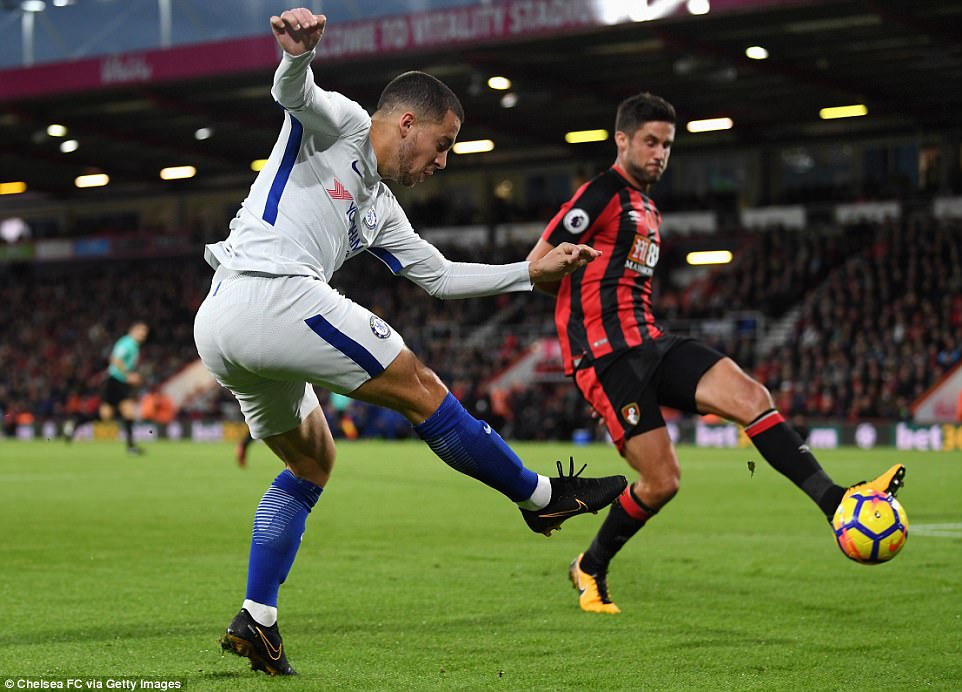 Morata was the first culprit. A tragicomic 30 seconds saw Begovic skew a clearance straight into Eden Hazard’s path. The Belgian carried the ball forward and teed up Morata perfectly but as the Spaniard opened up his body, he sidefooted the ball wide of the post.

At times this season, Conte has appeared to be spoiling for a fight at every turn. This week, the print media felt Conte’s wrath but unease towards the club hierarchy and his own players has pockmarked the Italian’s tenure since the end of last season.

The officials may have been next on his hit-list after Morata was then spurned by Eddie Smart’s offside flag.

A well-worked set-piece saw Hazard pull the ball back for David Luiz, whose effort was deflected towards Cesar Azpilicueta. Begovic smothered the defender’s effort and Morata turned the ball in. Yet up went Smart’s yellow flag to curtail the celebrations. Replays did not reflect well on the decision, with Azpilicueta shown to be level.

Bournemouth, languishing in the relegation zone and with pressing needs for points of their own, threatened rarely.

A victory at Stoke aided matters last week but the club have not won consecutive Premier League matches since April and it may be one reason why boyhood Everton fan Eddie Howe’s name has scarcely been mentioned in relation to the vacant job at Goodison Park.

Howe’s concern was such here that he removed the anonymous Jermain Defoe at the interval. Bournemouth were tepid for long periods here, too passive off the ball and lacking incision during the rare periods they exercised control. 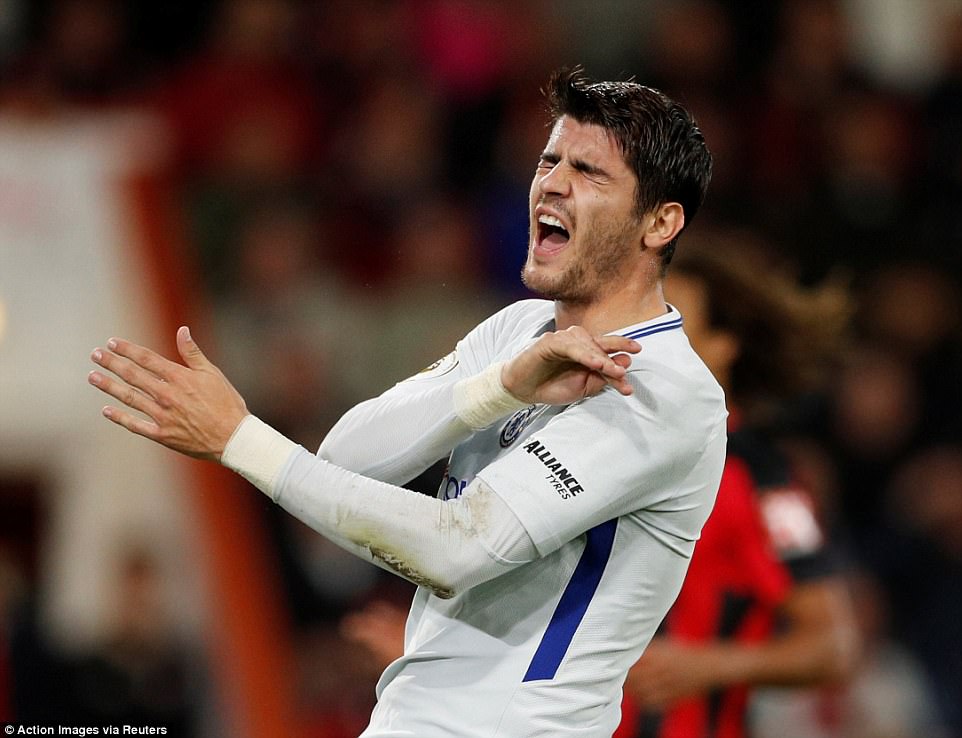 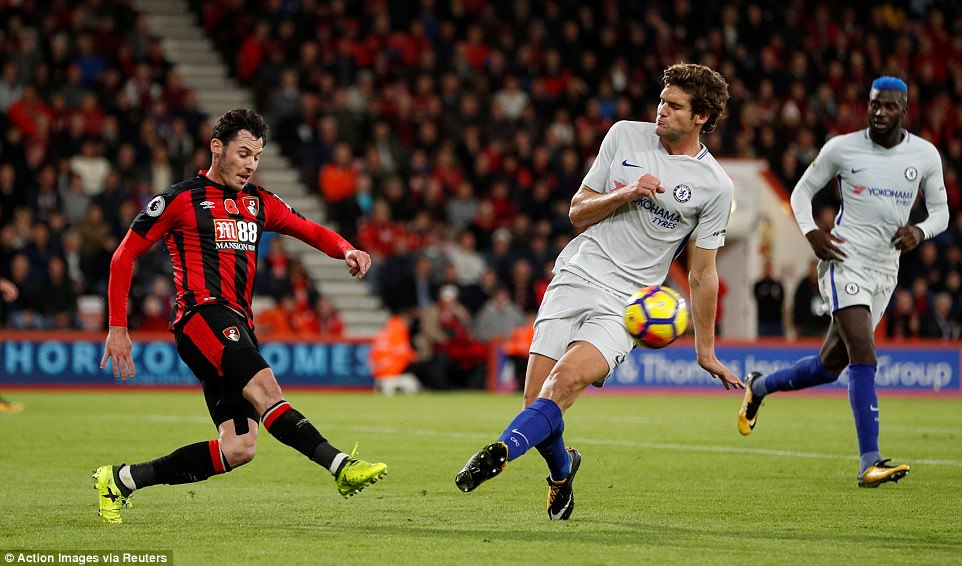 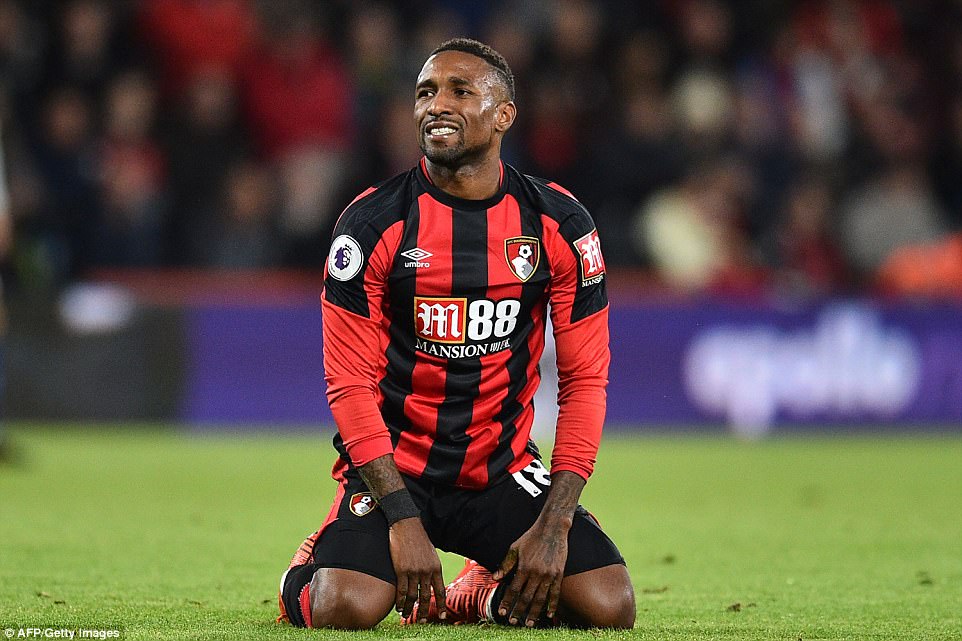 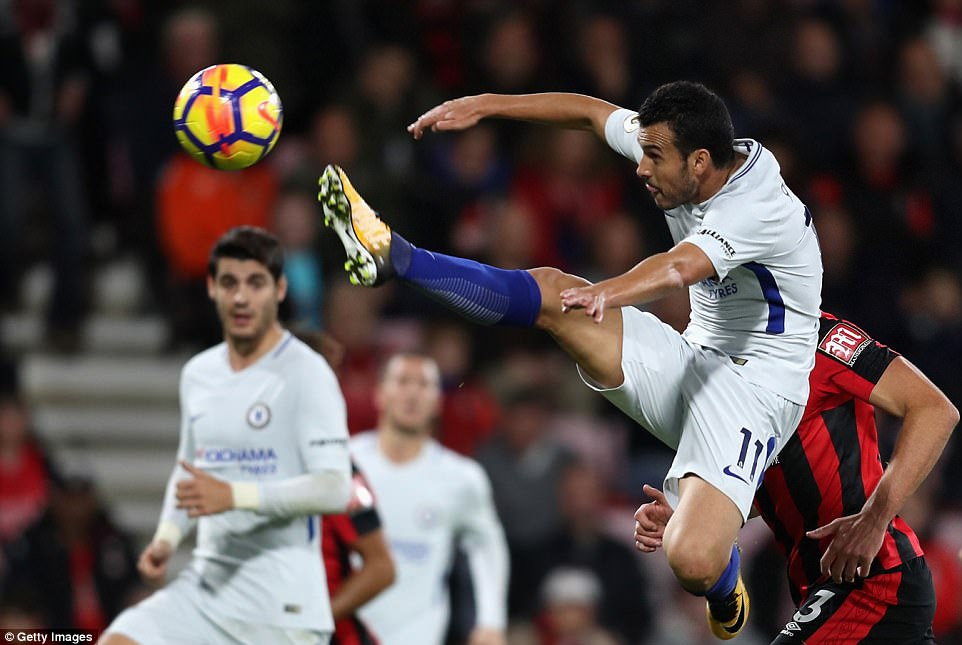 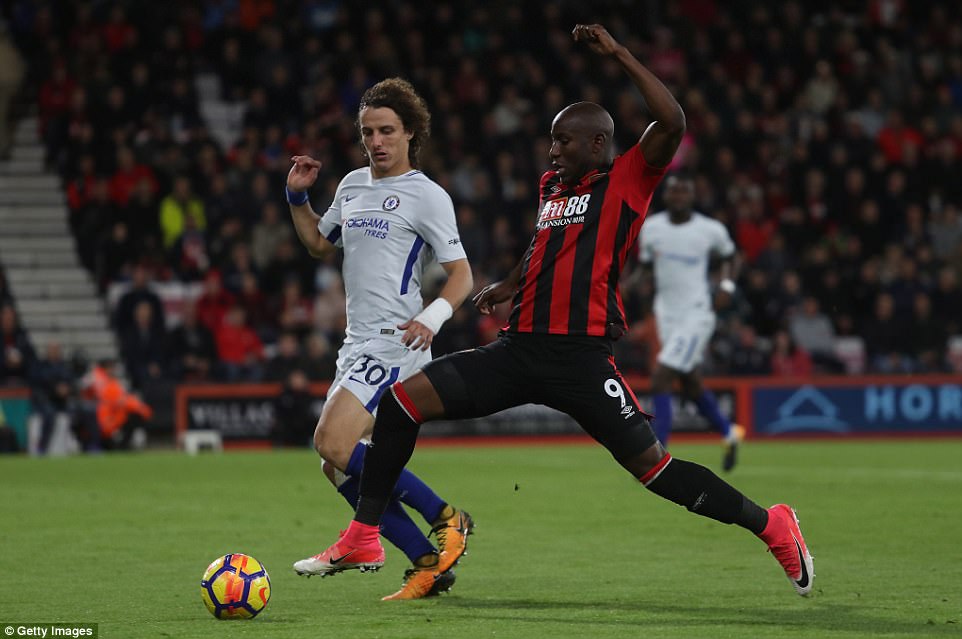 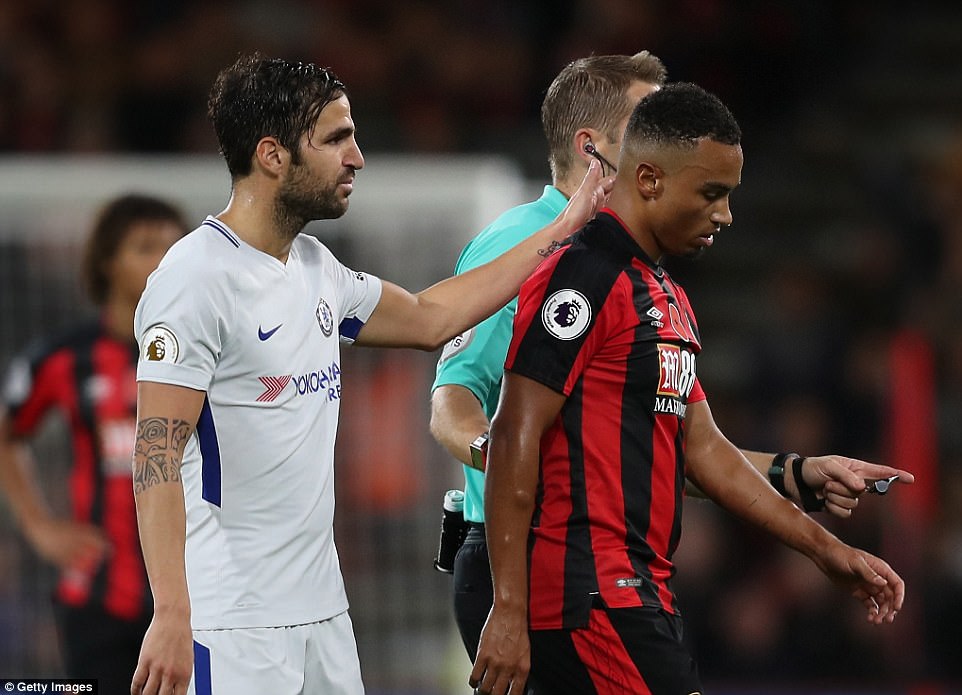 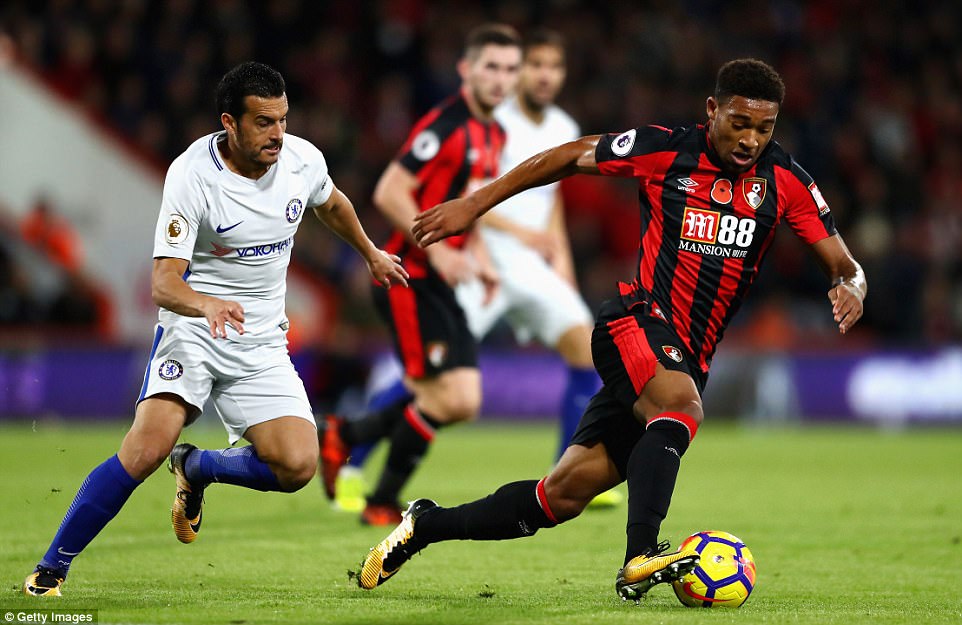 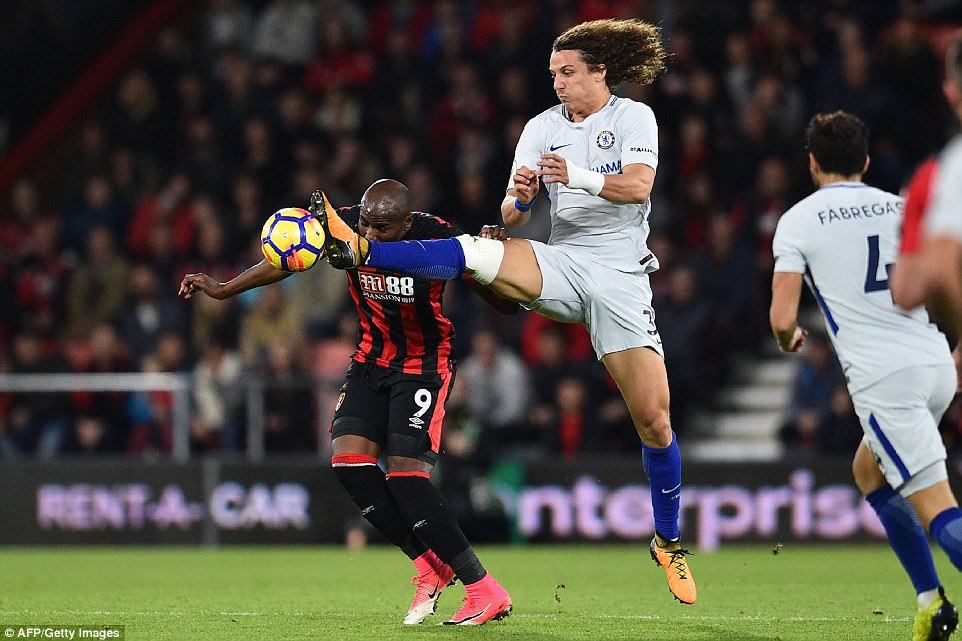 Chelsea kept coming. As the first-half ended, Chelsea could not have set up camp more in the Bournemouth half if they pitched a row of tents across the 18-yard-line. A breakthrough appeared inevitable.

Morata’s qualities soon came to the fore, as he tip-toed by two opponents after lovely interplay with Hazard. Morata drove the strike powerfully towards goal but Begovic spread himself and diverted the ball over. Conte screwed up his features and ran his hands over his visage before turning back to the dugout in frustration. Little wonder he smiled so broadly when the breakthrough came.

His team still had the occasional fright, most notably when David Luiz and Cesc Fabregas ran into each other and Defoe’s replacement Jordon Ibe struck the ball over the top. Captain Azpilicueta appeared to meet every cross. When Thibaut Courtois was finally called upon, he held firm when Steve Cook powered a strike on goal.

Indeed, Chelsea should have closed the game off themselves when Fabregas broke from midfield and curled over the top from the angle. For Conte, however, the victory was all that really mattered. 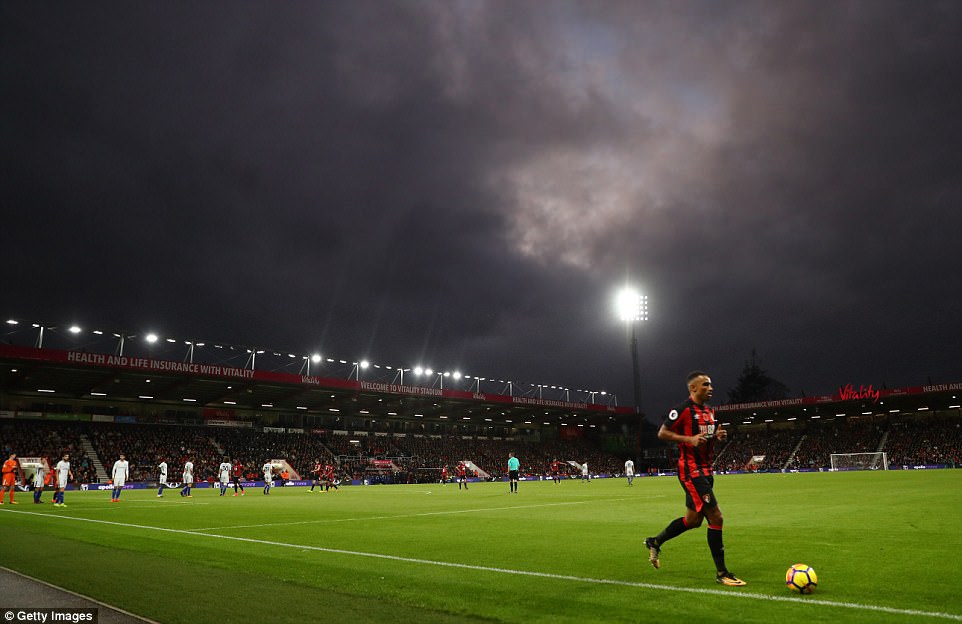 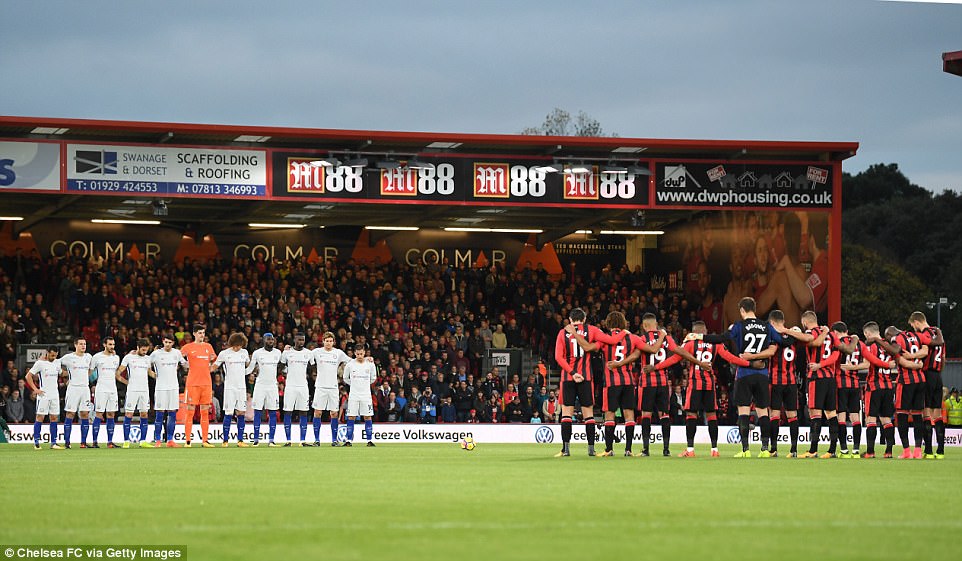