Bournemouth jewellery raiders jailed for a total of 28 years

Shocking CCTV captured the moment armed robbers posed as customers before overpowering staff at a jewellers with handguns and a lump hammer.

Smartly-dressed Mustafi Ali, 25, and Michael Adiat, 23, shook hands with jeweller Ben-Simon Charles before sitting down at a desk and being shown two luxury watches worth £50,000 each.

Without warning Ali stands up, pulls out a pistol hidden under his jacket and grabs Mr Charles and the manager in a headlock while threatening to kill them.

Ali, wielding the hammer, threatens a third employee with it before smashing the reinforced glass of display cabinets to get to more expensive watches. 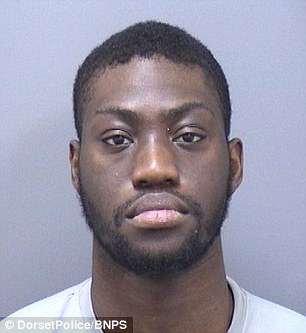 Mustafi Ali, 25 and left, and Michael Adiat, 23 and right, both from east London, have been jailed for a total of 28 years for a terrifying raid on a jewellers in Bournemouth 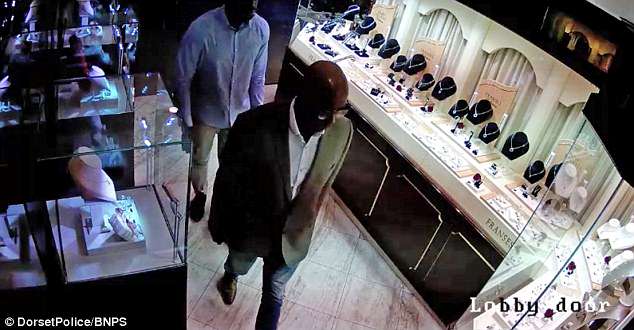 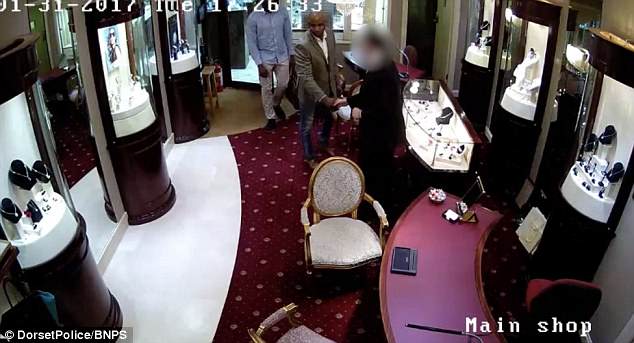 The pair shook hands with the jeweller before sitting down at a desk with him and shown two luxury watches worth £50,000 each

After 90 seconds the two robbers flee the store and make off in a getaway car.

But quick-thinking member of the public made a note of their licence plate and the pair were caught by armed police less than a mile from the scene.

While the footage looks like something from a thrilling TV crime drama, the shocking raid actually played out in the genteel seaside town of Bournemouth, Dorset.

Ali and Adiat, both from east London, have now been jailed for 16 years and 12 years for the robbery.

Bournemouth Crown Court heard the two men had rang ahead to Franses Jewellers on January 31 last year and arranged to look at Patek Philippe watches.

They arrived at 4.30pm and Mr Charles took them into a back room where Ali tried on two watches before pulling out the imitation handgun with the valuable watch still on his wrist.

The CCTV shows Adiat grab first Mr Charles and then Mr Franses in headlocks, pointing the gun at their heads and holding their throats so tight they struggled to breathe. 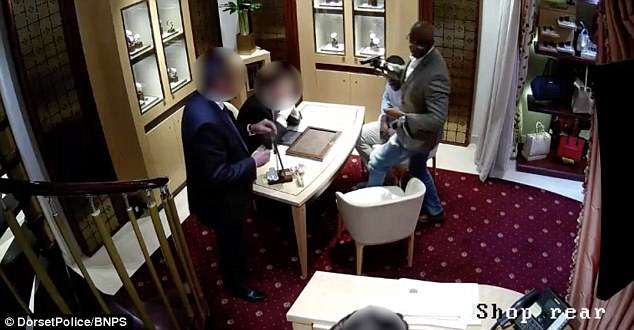 Without warning Ali stands up, pulls out a pistol hidden under his jacket and grabs Mr Charles and the manager in a headlock while threatening to kill them 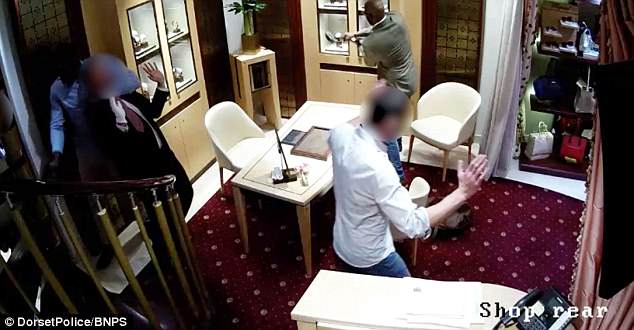 While Adiat grabs the jeweller around the throat, Ali takes out a hammer and starts smashing the cabinet 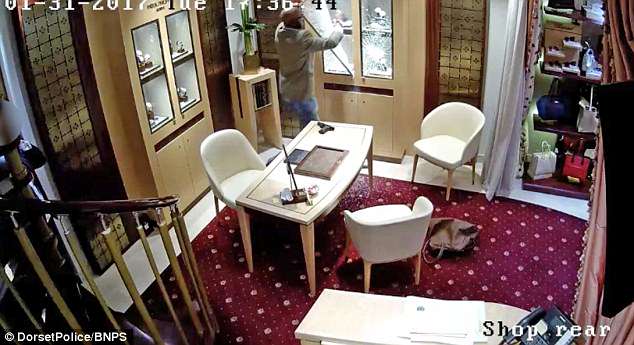 At one point there is a scuffle and Ali threatens a third member of staff, who holds his hands in the air, with the lump hammer.

Ali cut his hand in the process of smashing the display cabinet and a member of staff managed to press a panic alarm.

The pair fled the shop and got into a blue Ford Focus but passer-by Ellis Spiers noted the number plate and called police.

When officers stopped the car on the Wessex Way they discovered two guns and two hammers inside the vehicle, one with Ali’s blood on it. The stolen watches were recovered.

Franses was the fourth jewellery store Ali had targeted in a month-long spree, with his thefts amounting to more than £350,000 worth of jewellery. 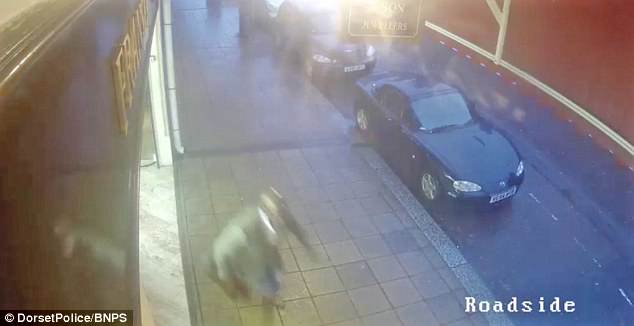 The pair then make their getaway. A witness managed to take down the vehicle registration number and a short time later the car was stopped by armed police in Bournemouth

Judge Brian Forster described them as ‘ruthless’, praised Dorset Police for the speedy arrest and said he would recommend Mr Spiers to the High Sheriff for an award.

Ali, who also admitted three other robberies at jewellers in Buckinghamshire, Bedfordshire and Essex, was jailed for 16 years and told he would be subject to an extended five-year licence period.

Adiat was sent to prison for 12 years with a three-year extended licence period.

Detective Constable Jo Regan, of Bournemouth CID, said: ‘This was a violent offence and a very frightening ordeal for the victims, who all showed considerable bravery in the circumstances.

‘I hope the sentence imposed by the court will send out a clear message that this kind of offending will not be tolerated.’