A bowl of lamb stew could be as polluting as boiling a kettle 258 times, a report has suggested.

Producing and cooking the ingredients for one portion of a traditional Welsh Lamb Cawl produces 5.9kg of greenhouse gases because of the methane produced by sheep, the World Wide Fund for Nature (WWF) said.

The claims made in the study has provoked outrage from farmers who said it did not highlight the environmental benefits of rearing sheep.

Producing and cooking the ingredients for one portion of a traditional Welsh Lamb Cawl produces 5.9kg of greenhouse gases because of the methane produced by sheep

The report, called Food in a Warming World, looked at the environmental impact of four traditional British dishes – Chicken Tikka Masala, Fish and Chips, a Ploughman’s, and Welsh Cawl.

Based on greenhouse gas emissions, or carbon dioxide equivalent (CO2e), the charity found Welsh Cawl was the most environmentally unfriendly of the four.

Of the 5.9kg of CO2e produced in preparing the stew, 4.51kg came from rearing the lamb.

The total environmental impact of the dish was found to be the same as driving 31 miles in a car, or charging a smartphone 722 times.

The traditional stew, made with potatoes, swede, carrots and leeks, also produced greenhouse gases equivalent to switching an LED lightbulb on for 65 days.

The report said: ‘The iconic dish with the highest footprint is for cawl, at 5.9kg CO2e per serving, of which three quarters derive from the lamb, largely due to the enteric fermentation of sheep digestion that leads to methane release.’

A Cheese Ploughman’s was the second most environmentally unfriendly out of the four, producing 2.6kg of CO2e.

The pollution created by the selection of bread, cheese and onions was equivalent to boiling a kettle 113 times, or charging a smartphone 316 times. 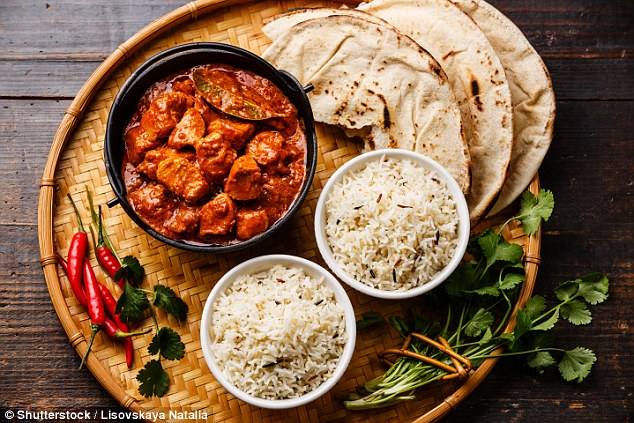 Almost half of the greenhouse gases came from making the cheese, around 1.28kg of CO2e for just 125g.

Chicken Tikka Masala was the second least environmentally unfriendly dish, producing 2kg of C02e, the same as having an LED lightbulb on for 22 days.

Fish and chips was the least polluting dish out of the four examined, with just 1.54kg of CO2e, or boiling a kettle 67 times.

Yesterday farmers voiced their outrage at the report, claiming it did not highlight the environmental benefits of rearing sheep.

Phil Stocker, chief executive of the National Sheep Association, told the Daily Telegraph: ‘It has taken a very narrow view of the impacts of lamb cawl and is it really quite astonishing.

‘Lamb cawl is the exact kind of dish that we should be promoting, it is highly nutritious and a good source of protein.’

A WWF spokesman said in a statement: ‘Climate change is a major threat to our world and its precious wildlife and landscapes.

‘Food consumption is one of the biggest drivers of carbon emissions which is why our report showed the impact of climate change on Britain’s most iconic dishes, including Welsh cawl.’