Boy, 10, dies eight years after eating contaminated burger from Lidl which left him unable to talk, walk or eat

A ten-year-old boy left unable to talk or walk after eating a contaminated burger bought from Lidl has died.

Nolan Moittie was rushed to intensive care on Saturday morning after his heart stopped beating, with doctors unable to revive him.

In June 2011, aged just 23 months, he was one 15 children in the Hauts-de-France region who fell ill after eating beef contaminated with E.coli.

It left him paralysed for life and he was unable to talk or even eat.

Nolan Moittie died on Saturday, eight years after eating a contaminated burger from Lidl that left him physically and mentally disabled

He was also left severely mentally disabled after developing neurological sequelae, a condition which results from a previous disease.

The other children suffer from conditions that will affect their kidneys for the rest of their lives.

The lawyer of Nolan’s family, Florence Rault, said the boy had suffered a ‘real ordeal since the accident’.

Bosses at Seb-Cerf, who marketed frozen steaks under the Steak Country brand, were tried at Douai Criminal Court in northern France in 2017.

Former boss Guy Lamorlette, 78, was sentenced to three years in prison for failing to carry out checks on the meat. 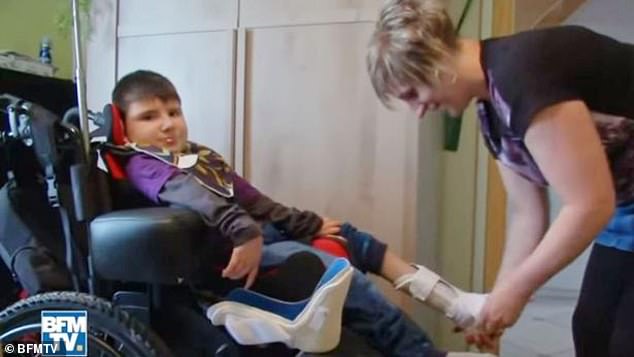 The beef was contaminated with E.coli and it left Nolan unable to walk, talk or even eat from 23 months old to his death

He was also banned from any industrial or commercial activity and ordered to pay damages to the victims.

In a hearing in February this year, he blamed the contaminated meet on Laurent Appere, his former quality manager.

Appere died a few days before the deliberations of the first trial.

According to his lawyer, Lamorlette is now ‘very seriously’ considering an appeal.

The lawyer said: ‘We do not want to remove the victim status of all these children and their parents, it is simply a legal debate on the responsibility of Mr Lamorlette.’

Nolan’s family lawyer, Ms Rault, said: ‘I hope that the person responsible for this tragedy will have the decency to withdraw his appeal on points of law.

‘At the first trial, he did not even want to watch Nolan, now he must serve his sentence and Nolan’s parents must be able to be compensated and mourn.’