Boy, 13, left with gaping wounds on his feet after being attacked by a shark in the sea in Florida

Boy, 13, is left with gaping wounds on his feet after being attacked by a shark while paddling in the sea in Florida

Logan Radd, 13, was attacked while in the water off Brevard County beach on Tuesday afternoon

A 13-year-old surfer who had his foot torn open in a vicious shark attack in Florida said ‘Mommy, don’t cry,’ when she saw the gaping wound.

Logan Radd, of Satellite Beach, was paddling off Brevard County beach at around 4.30pm on Tuesday when he felt something biting his foot.

‘I was coming in and he bit my foot and then he bit it again,’ Logan told Florida Today. ‘It was probably a two-foot shark.’

The heel of his left foot was lacerated in two places and his mother watched as her teenage son whipped his foot out of the sea in pain.

Jennifer Radd dashed over to her son as she saw the black-tipped shark nearby and rushed the boy to Holmes Regional Medical Center in Melbourne.

‘He just told me, “Mommy, don’t cry,”‘ Radd told Florida Today. ‘He was so brave, just telling me he was going to be OK. The bites looked pretty gnarly and got him 19 stitches … It’s just the worst thing a mother could go through.’

Logan, who is a competitive surfer, had recently finished third in the Boys Under 14 ESA Easterns Surfing Championships in Nag Head, North Carolina while riding for the Central Florida team. 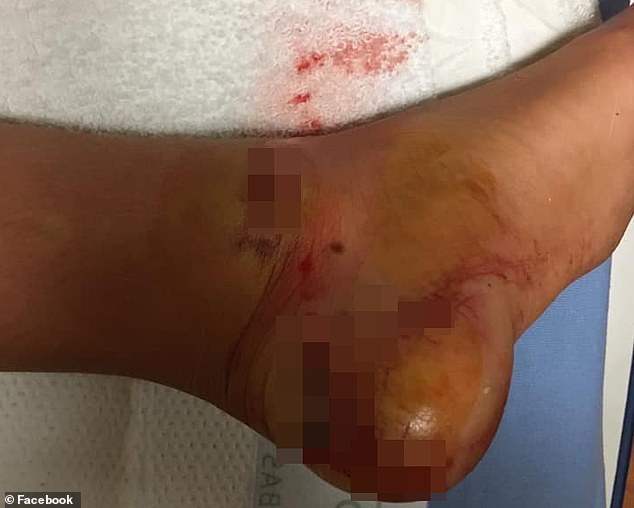 Logan said: ‘I’m going back in as soon as I get the stitches out … Sharks are out there. I guess it was just my time to get bit. It’s all a part of the water’ (pictured: his foot before it was stitched up)

He was practicing all day with his coach when the freak incident occurred.

It was the first recorded shark bite of the year at Brevard County beach, according to the Florida paper.

His mother told Florida Today: ‘You hear about these things but you never think it will happen to someone you love.’

Logan is unable to surf and is on crutches at the moment, although X-Ray scans were able to rule out any ligament damage.

However, he did have some tooth fragments embedded in his flesh.

Logan told Florida Today: ‘I’m going back in as soon as I get the stitches out … Sharks are out there. I guess it was just my time to get bit. It’s all a part of the water.’