Boy, 16, is charged with murdering Uber Eats delivery driver who was beaten to death

Boy, 16, is charged with murdering Uber Eats delivery driver who was beaten to death as he tried to stop gang stealing his moped from a Tesco car park in south-west London

A 16-year-old boy has been charged with murder after a Brazilian food delivery driver man died of his injuries after being attacked in south-west London.

Iderval da Silva, 46, was found by emergency services with a head injury in Battersea, at 4.30pm on Saturday and died on Tuesday, Scotland Yard said.

Mr da Silva, who had a 26-year-old son, was punched and beaten over the head with a hammer.

Iderval da Silva, 46, moved to the UK from Brazil earlier this year. He was attacked on Saturday

After driving through Westminster to the Houses of Parliament they knelt in a circle on the green.

One from the Stolen Motorcycle Recovery group told the Evening Standard: ‘People were were riding in support of the victim and to protest over the levels of crime suffered by delivery riders.

‘Many are Brazilian and feel because they are foreign no-one really cares about them.’

Friends of Mr da Silva, who is Brazilian with Portugese citizenship, said he arrived in London three months ago and had been working for Uber Eats.

He was from São Paulo and had served in the Brazilian army and taught capoeira, an Afro-Brazilian martial art.

His friend Silva Rodge, 41, told the Standard: ‘He was the friendliest man I’ve ever met. He helped people and asked for nothing back. He would always have his hands open for anyone that needed help. He was alone and came to London to be close to his friends. 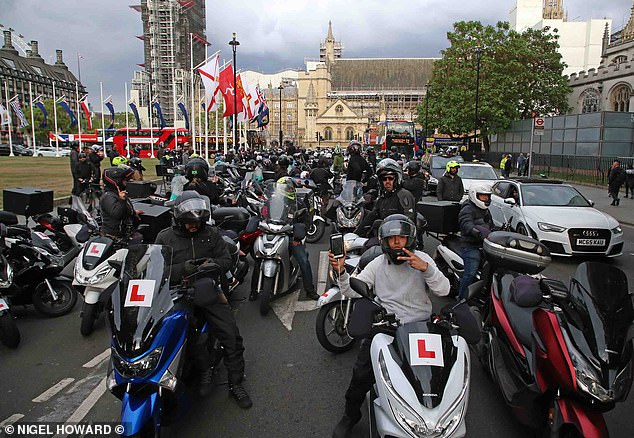 Moped and scooter food delivery riders at Parliament Square in solidarity after the murder of their colleague in Iderval da Silva, 46, 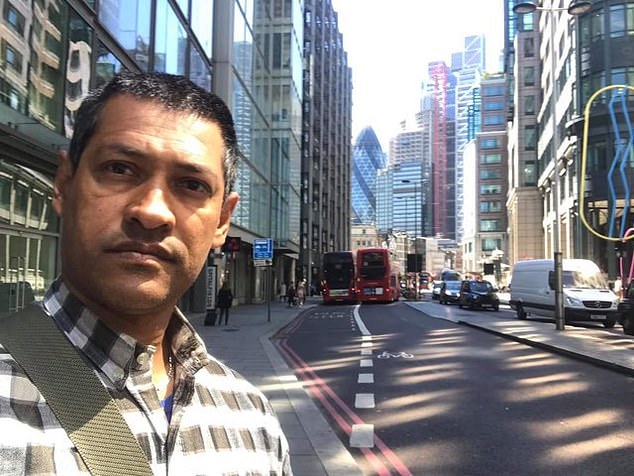 ‘He studied martial arts for 27 years and back home he used to teach it for free to young children. He loved riding a bike and it was a way for him to earn money and save for his dreams.

‘He wanted to have his own studio and teach martial arts to young boys as a way to keep them off the streets.’

Mr da Silva was attacked outside a Brazilian restaurant in Charlotte Despard Avenue and found in the nearby Tesco car park, by teenagers attempting to steal his moped.

Mr Rodge, who helped organise the ‘ride-out’, told the paper: ‘They’ve taken someone’s life. We want justice because this is not only for the community of riders, it’s for all of us. The purpose is to let people know we’re not going to let it be swept under the carpet.’

Detective Chief Inspector Mark Cranwell, leading the murder investigation, said: ‘I am certain several people — probably local to the area — will know what happened and who was responsible for this attack on the victim and on their own community. I need them to come forward and share information with me.’

The 16-year-old, from Wandsworth, who cannot be named for legal reasons, was charged last night and appear before magistrates in Wimbledon today. A 19-year-old man has been arrested on suspicion of murder in connection with the incident, police added.