Boy, 17, is arrested after the deaths of a woman and young child in Ipswich

A young mother was found dead alongside her toddler son by her 15-year-old brother after she killed herself, neighbours claim.

Tragic Kia Russell, 19, was discovered at the family home on the Whitton Estate in Ipswich, Suffolk at 5pm last night.

Her son, who was named by neighbours as two-year-old Kamari, was treated by paramedics at the semi-detached house but died at the scene.

Police are currently quizzing a 17-year-old boy but they have refused to confirm why he was arrested, but stressed that it was not on suspicion of murder or manslaughter.

Kia Russell, pictured with her son Kamari, was found dead at their home in Ipswich, Suffolk 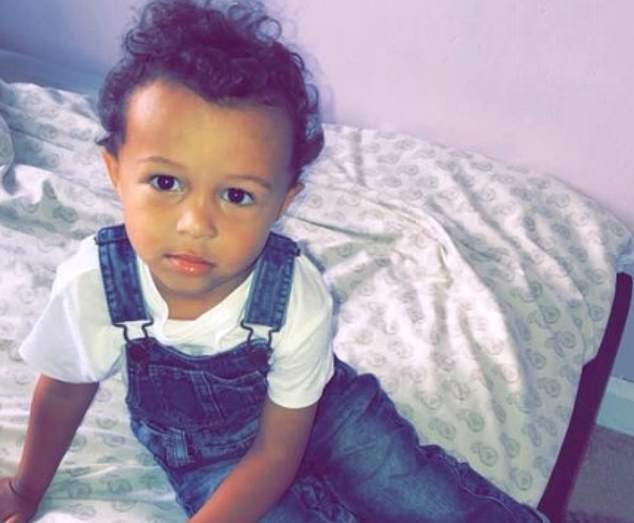 Her son, who was named by neighbours as two-year-old Kamari (pictured) was treated by paramedics at the semi-detached house but died at the scene

He was today still being quizzed by detectives at a police investigation centre in Martlesham near Ipswich.

Neighbours said today that they believed Kia suffered from mental health issues for many years and had a part time job as a cleaner.

A woman who knew her said she was told her younger brother Rhys, 15, found her dead at the house when he returned home. It is believed she killed herself.

She said: ‘I think it was him who called the ambulance.

‘She was a good mum. She had her little boy when she was just 16 and would always look after him. 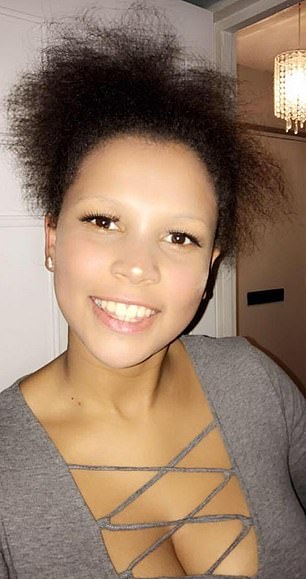 Kia (pictured) is thought to have lived for around ten years at the house with her young son, mother Leanne Clarke, 38, and 14-year-old brother Rhys

‘She was so young when she had him, but she did her best.

‘Her little boy was so cute and lovely. People were saying she had split up from her boyfriend, but I don’t know for sure.

‘I would see him in the garden playing with the boy in the summer. I last saw Kia on Wednesday at about 10am when she went out in her dressing gown to her car to get something and then went straight back inside.

‘You would always hear her son in the house. But yesterday it was very quiet and I just assumed they were out.’

Officers were called at around 5pm yesterday by the East of England Ambulance Service to reports that a body of a woman had been found.

Kia lived is thought to have lived for around ten years at the house with her young son, mother Leanne Clarke, 38, and brother Rhys.

Rhianna Nujeerrallee, a close friend of Kia, revealed that she had been planning to hold a third birthday party for her son Kamari next week.

Ms Nujeerrallee who met Kia three-years-ago at Suffolk New College, said: ‘I am shocked and heartbroken.’

In an emotional Facebook post, Ms Nujeerrallee wrote: ‘My heart hurts’, later adding a picture with the message: ‘Suicide victims are not “weak”, “selfish” or “cowards”.’

Ms Nujeerrallee added: ‘Kia was round my house Saturday with her son. We had McDonald’s and we were talking about my son Cruize’s birthday party this weekend.

‘Kamari was supposed to be coming along, and Kamari’s third birthday party was going to be next Sunday.’

Mother-of-four Lisa Horne, 39, who left flowers outside the house today, said: ‘I didn’t know her loads.

‘If I saw her, it was always with her little ‘un. We would always say, ‘Hello’ or ‘Good morning’. 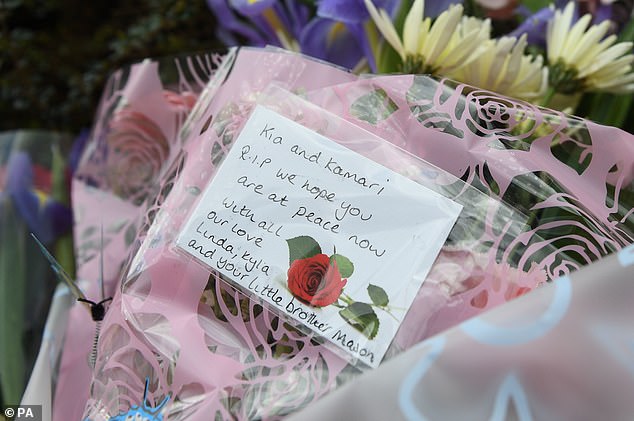 A floral tribute left outside the home in Ipswich reads: ‘Kia and Kamari, RIP we hope you are at peace now. With all our love, Linda, Kyla, and your little brother Mason’ 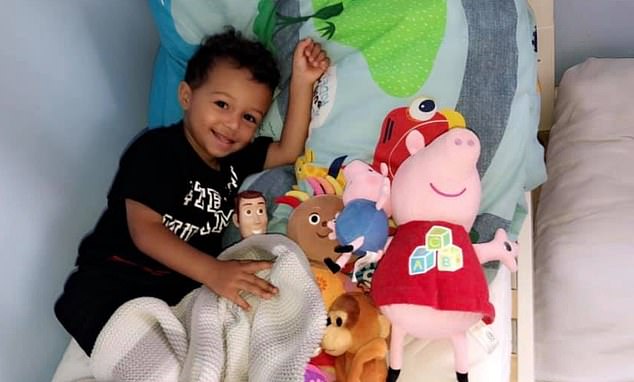 A neighbour said they are a ‘friendly family’ and ‘would always wave to say hello.’ Pictured: Two year old Kamari

‘She would go out with her boy doing shopping and whatever. It was just general mum’s stuff.’

Ms Horne, who used to live opposite house until moving before Christmas, added: ‘It is just very hocking whatever the situation. I just hope the family get some peace.

‘There was never anything to think that she would do anything or someone would hurt her.

‘It is just really sad for a young girl and her boy to lose their lives. She never had any issues with anyone around here.’ 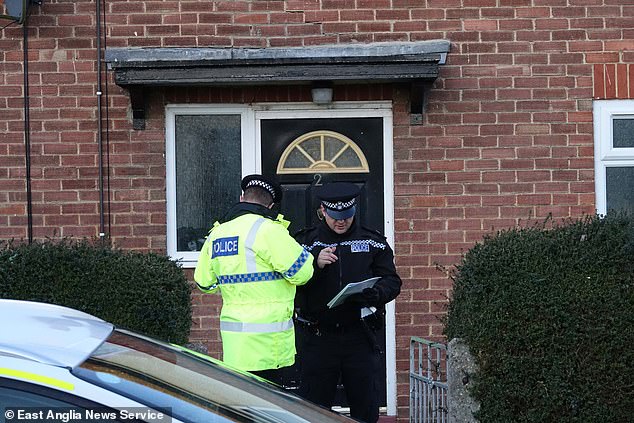 Police at the house in Ipswich after the teenager’s body was found yesterday at 5pm. A young child was also found and treated by paramedics, but died at the scene

A near neighbour who asked not to be named said: ‘They are a friendly family and would always wave to say hello, I am so shocked.’

Another neighbour said: ‘As a family, they kept themselves to themselves. Nobody has a clue what happened.

‘When we had the nice weather a few days ago, I saw the girl cutting the grass in the front garden as I was walking past.’

The rev Mary Sokanovic, 60, who is priest in charge of St Mary’s and St Botolph’s church in Whitton, said: ‘She would be opening her church for local people to pray and light candles.’ 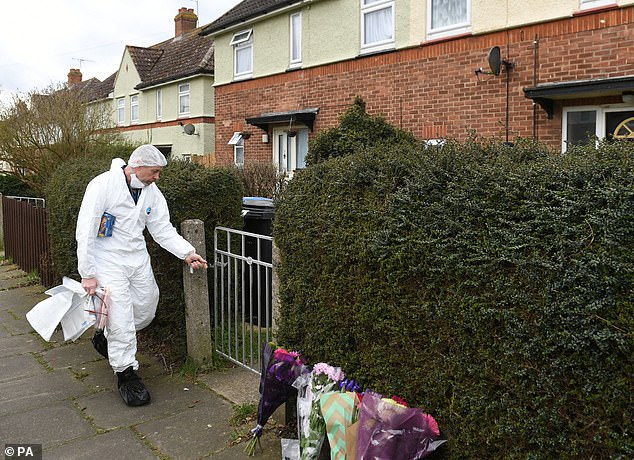 Speaking when she visited the scene today, she said: ‘It is absolutely distressing. There is no other word for it.’

‘It is very early days. People around her have only just woken up to this and it will take a while for it to sink in.

‘I have just come round to show support for the community. It is a very mixed area around here with all sorts of people striving to live as best as they can.

‘There are people who do very well and others who do no to do so well.

‘The family were not regular worshipers in the congregation of the church, but we have a care for the souls of everyone in the community. 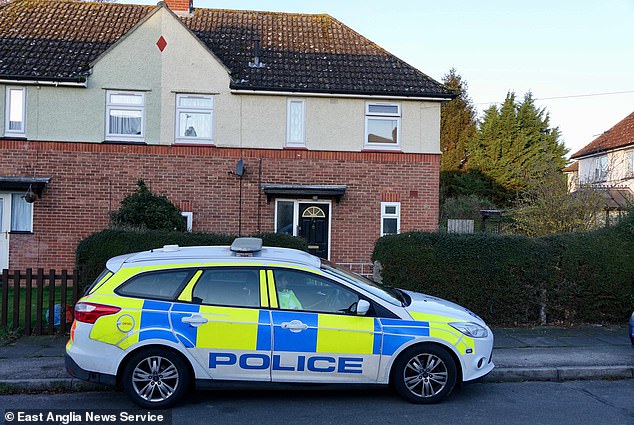 A police car outside the property in Ipswich this morning. Officers remain at the scene following the deaths yesterday

‘I am opening the church so people can come in and say a prayer, light a candle or just have somewhere quiet to sit in a bit of peace. It is a question of being available.’

A Suffolk Police statement said: ‘Police have launched an investigation after the sudden death of a woman and a child at an address in Ipswich.

‘Officers were called by the East of England Ambulance service, today, Wednesday 6 March at 5pm to reports that a woman’s body had been discovered in a property on Swinburne Road.

‘A young child also found at the address was treated by paramedics but sadly died at the scene.

‘Next of kin for both people have been informed.

‘A police scene is in place whilst an investigation into the circumstances of the deaths continues. 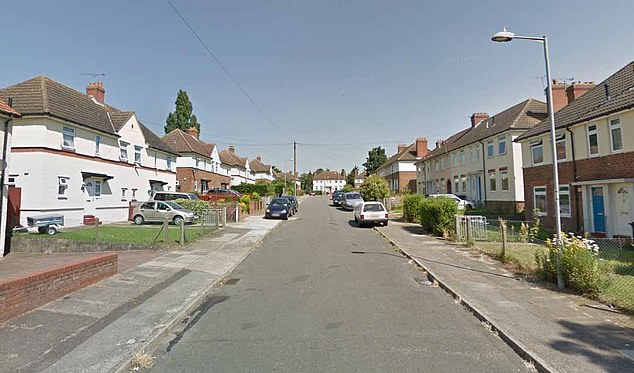 A 17-year-old boy has been arrested after police were called to Swinburne Road, Ipswich, pictured

‘As a result of subsequent enquires connected to the investigation a 17-year-old male youth from Ipswich has been arrested by police.

‘He has been taken to Martlesham Police Investigation Centre where he will be questioned by officers.’

The statement added: ‘The 17-year-old boy detained in connection with this investigation has not been arrested on suspicion of murder or manslaughter.

‘No further details regarding the incident or the arrest can be confirmed at this time.’

Anyone with any information is asked to call Ipswich CID on 101 quoting CAD reference 284 of March.