Boy, 2, reunited with his mom 43 days after infertile woman ‘paid two children to kidnap him’

A two-year-old boy has been rescued 43 days after he was kidnapped from a market in Mexico, allegedly by an infertile woman who paid two children to lure him away from his mother.

More than a hundred agents raided a home in the municipality of Cintalapa de Figueroa on Thursday – 125 miles from the city of San Cristobal de las Casas where Dylan Gómez was kidnapped on June 30.

Chiapas state attorney general José Luis Llaven said Dylan was found with his abductor, identified only as 23-year-old Margarita due to Mexico’s due process law.

‘His health is very good. He was checked by a pediatrician,’ said Llaven at a press conference Friday attended by the boy and his mother Juana Pérez.

‘Fortunately, the conditions in which the accused had him were humane, she fed him and cared for him. She says that she became fond of the child.’

Pérez said her ‘little fat boy’ seemed a bit shocked when they reunited but that he had recognized all of his loved ones.

Juana Pérez (right) was reunited with her two-year-old son Dylan Gómez (left) 43 days after he was kidnapped at an outdoor market in Chiapas, Mexico 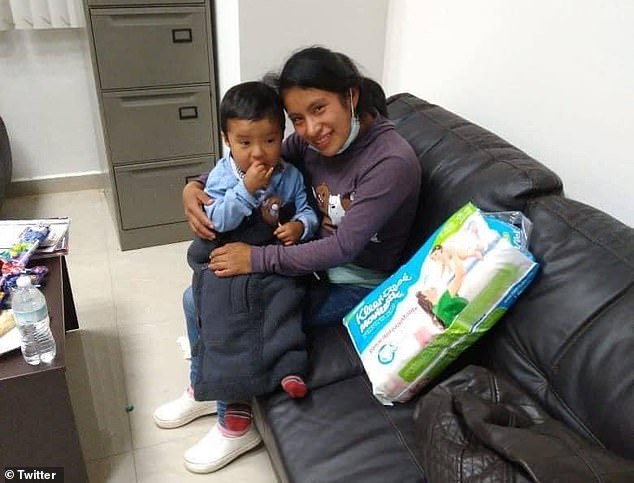 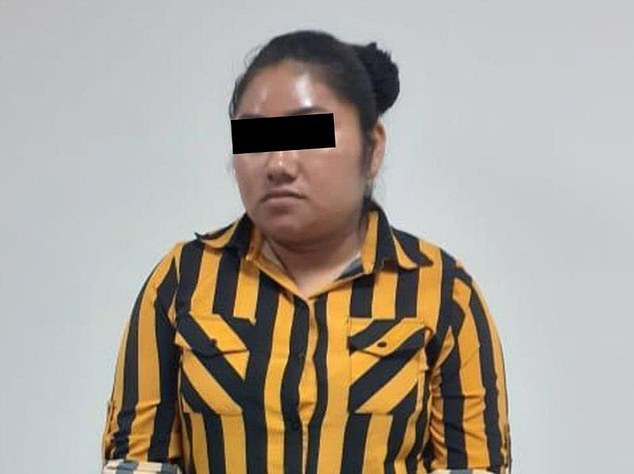 Margarita (pictured), the 23-year-old woman who was arrested Thursday by more than 100 agents who were searching for a two-year-old boy she allegedly abducted on June 30

Llaven said the 23-year-old woman confessed that she spent two days in San Cristobal de las Casas looking to kidnap a child as a way to entice her ex-boyfriend to resume their relationship.

The couple had reportedly broken up because she could not get pregnant.

Pérez was working her market post, where she sells fruits and vegetables, when she asked Gómez and her other son to walk over to her mother’s table.

It is then that Margarita allegedly approached two other children, and deceived them by asking them to assist her in getting Gómez, whom she identified as her son, because ‘he is too stubborn and does not want to leave with me.’

She allegedly paid the two other children $1 each for their help. 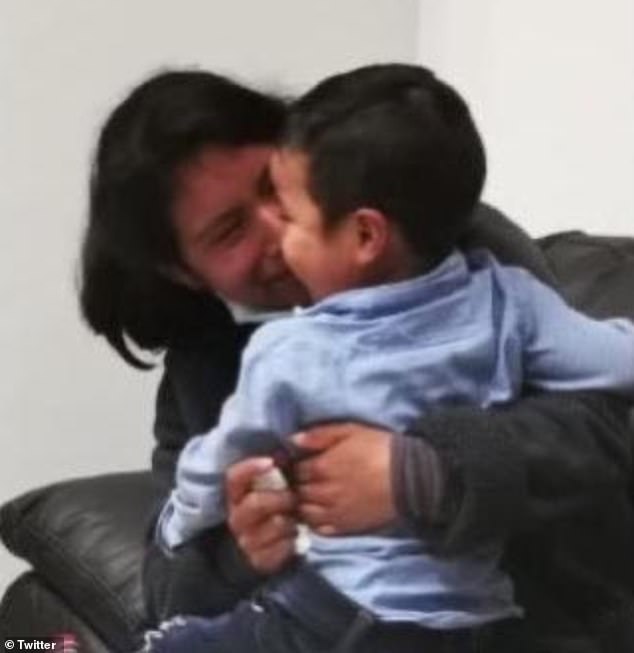 While searching for her son Dylan Gómez (right), Juana Pérez (left) sought the help of Mexico’s president and almost interrupted his daily press briefing at the National Palace 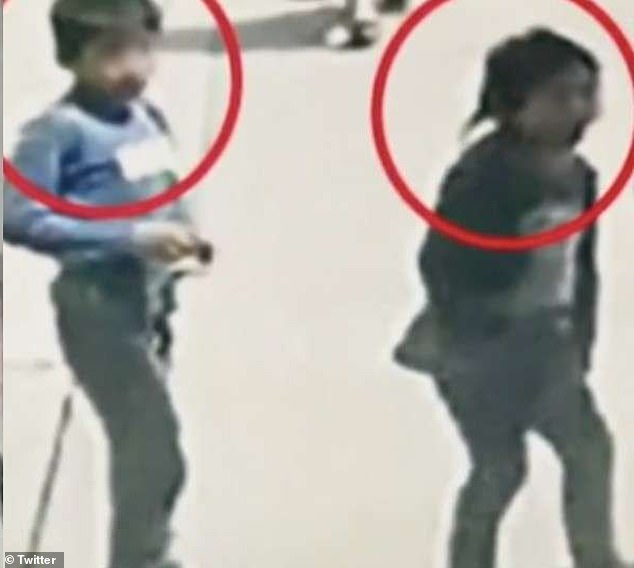 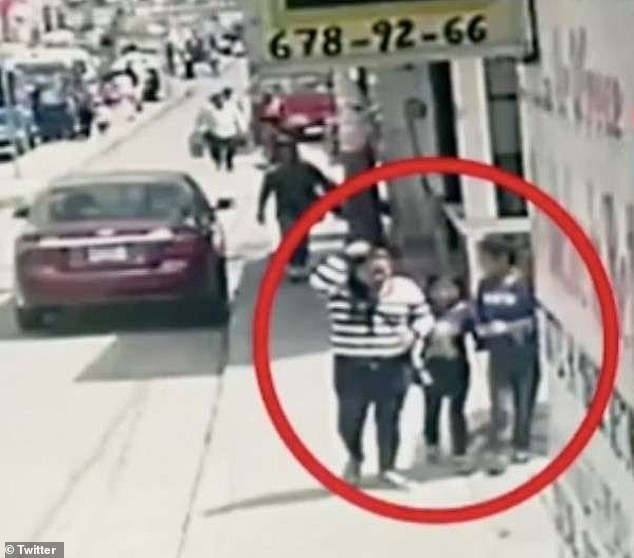 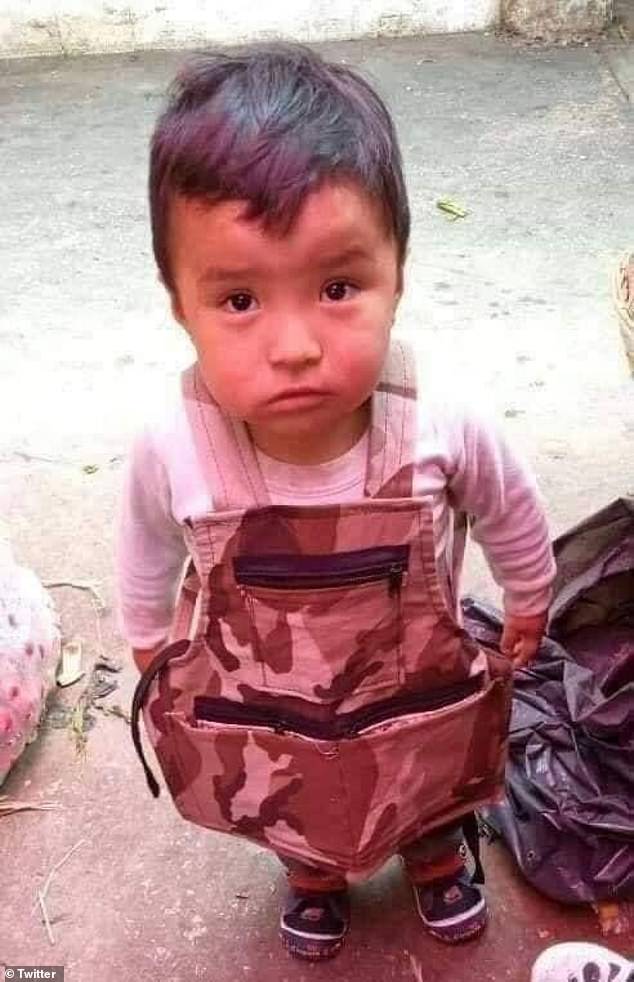 Surveillance cameras showed Gómez being led away by the two children.

Margarita spent the night with Gómez at a hotel in San Cristobal de las Casas while the frantic search for the missing boy was underway and then hailed a taxi the following morning to Cintalapa de Figueroa.

During the search for her son, Peréz tried interrupting Mexico President Andrés Manuel López Obrador’s press briefing July 22 to plead for his assistance in finding Gómez and participated in a demonstration outside the National Palace.

Llaven said he will seek the maximum prison sentence of 75 years for Margarita. 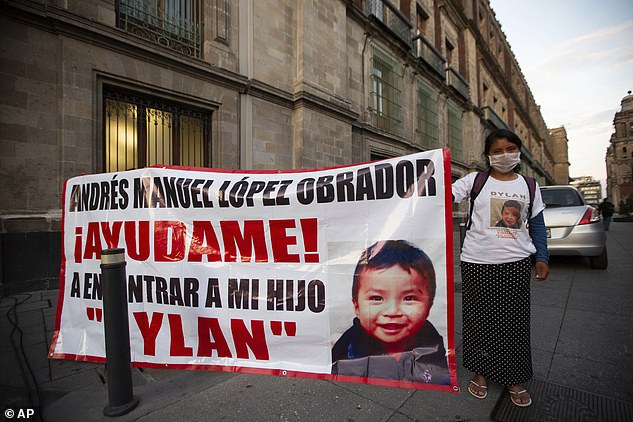 Juana Pérez holds a banner with her son’s photo outside the presidential palace in Mexico City on July 22, the same day she tried to interrupt a president’s daily press briefing to seek help in finding her two-year-old boy. Dylan Gómez Pérez had been missing since June 30 and was found in good health Thursday

The older sister of one of the girls who lured Dylan away was among three women arrested during the hunt for the two-year-old – after cops discovered 23 kidnapped children in a separate home in southern Mexico.

The kidnapped children were being kept and forced into hard labor.

The horrifying discovery came in July in San Cristobal de las Casas, Chiapas, while authorities were looking for the whereabouts of Dylan.

Chiapas state prosecutors said Tuesday that most of the children were between two and 15 years old, but three babies aged between three and 20 months old were also found during a raid at a house in the Tlaxcala neighborhood. 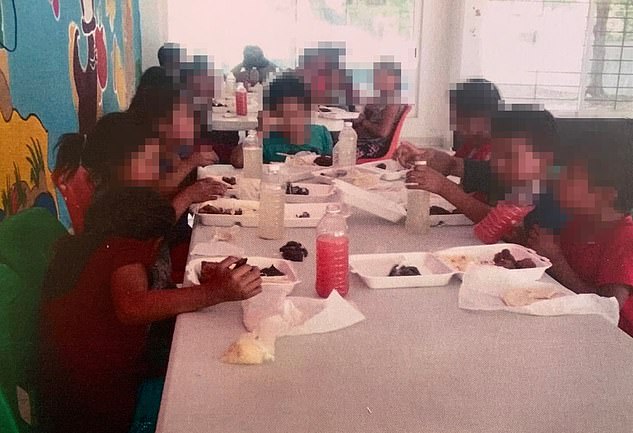 Some of the 23 abducted children who were rescued by the police in Chiapas, Mexico, on Monday while they were searching for Dylan Esaú Gómez Pérez. Authorities shared this photo of some of the children having a boxed lunch after their rescue

The indigenous colonial city of San Cristobal de las Casas is popular among tourists and it is common to see children and adults hawking local crafts like carvings and embroidered cloth on its narrow cobblestone streets.

However, few visitors to the city suspected that some of the kids selling trinkets had been snatched from their families and kept in deplorable conditions.

The Chiapas state prosecutors’ office said in a statement that the children ‘were forced through physical and psychological violence to sell handicrafts in the center of the city,’ adding the kids showed signs of ‘malnutrition and precarious conditions’.

‘According to the children, many of them were forced to go out on the streets to sell things, and moreover they were forced to return with a certain minimum amount of money for the right to get food and a place to sleep at the house,’ said state prosecutor Jorge Llaven.

According to video presented by the prosecutors, many of the children slept on what appeared to be sheets of cardboard and blankets on a cement floor.

Three women – identified as Maribel o María, María Hortensia and Juana – have been detained in the case and may face human trafficking and forced labor charges.

The children were handed over to child welfare authorities.