Dallas grandmother, 53, and her boyfriend are arrested for ‘tying up her six-year-old grandson and locking him in a shed for TWO WEEKS because he stole food’ as the boy claims the abuse started once schools closed for COVID-19

A 53-year-old grandmother and her boyfriend have been detained by Dallas authorities after police found a six-year-old boy trapped inside a shed on the woman’s property.

Esmeralda Lira and her boyfriend, Jose Balderas, have both been charged with felony counts of child endangerment.

Police were called to the home on Coston Drive at around 11.30pm on Sunday after receiving calls that the boy was locked in the shed, KTVT reports.

Esmeralda Lira and her boyfriend, Jose Balderas, have both been charged with felony counts of child endangerment 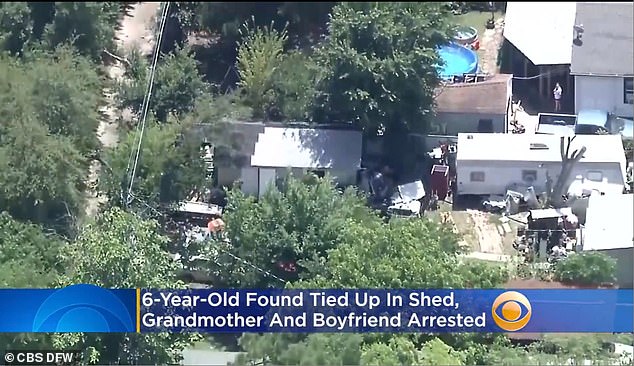 Dallas police were called to the home on Coston Drive at around 11.30pm on Sunday after receiving calls that the boy was locked in the shed

When asked about the boy’s whereabouts, Lira explained to authorities that he was with his mom.

But authorities soon discovered Balderas, who directed them towards the shed.

Police instructed Lira to open the door, declaring they would break it down if she refused. Lira opened the door and the boy was found inside with his hands tied behind his back.

Lira told police that the boy was there for a one-time punishment but Balderas told them that the boy had been confined in the shed for two weeks for stealing food.

Speaking with the minor, police say the boy told officers that the alleged abuse started since he ‘got out of school for this corona thing.’

The case is being investigated by the Texas Department of Family and Protective Services, WCTV reports. They have taken the boy, his seven-year-old sister and his four-year-old brother from the home. All have been placed in foster care.

Students learning from home during the pandemic could be at a greater risk of abuse as they aren’t protected by teachers who file abuse reports on parents.

‘Our concern has always been children being with their abusers all the time and having no safe adult to confide in or a safe adult that can report that abuse,’ Sarah Burns of the Dallas Children’s Advocacy Center explained to the Dallas Morning News.

In the last six weeks, reports of child abuse from teachers has fallen some 50 per cent compared to the six weeks before the pandemic.