A boy whose parents say they were accused of abusing him when they took him to A&E with bruises turned out to have a rare blood condition.

Jack Fearns, from Widnes in Cheshire, was taken to hospital by his parents when they noticed severe bruising on his body when he was six months old.

Doctors quizzed Tom and Darryl-Anne Fearns about the bruises and asked whether they had been hurting him, they claim.

But within 48 hours, Jack was diagnosed with severe haemophilia, an inherited condition which means his body doesn’t have the ability to clot blood.

Because of this, any knock or fall could cause Jack to have a serious bleed and even, in a severe accident, to sustain life-threatening injuries.

Jack Fearns was diagnosed with severe haemophilia, an inherited condition which means he doesn’t have vital blood clotting proteins at six months old. It causes bruising 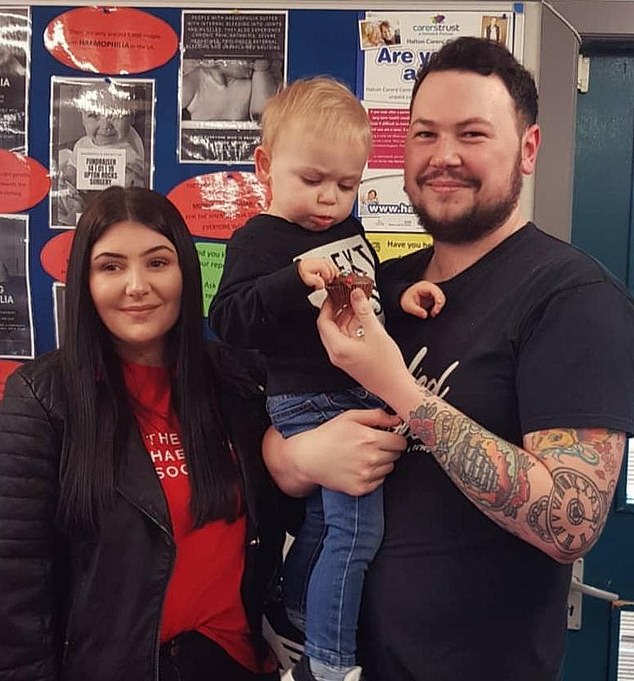 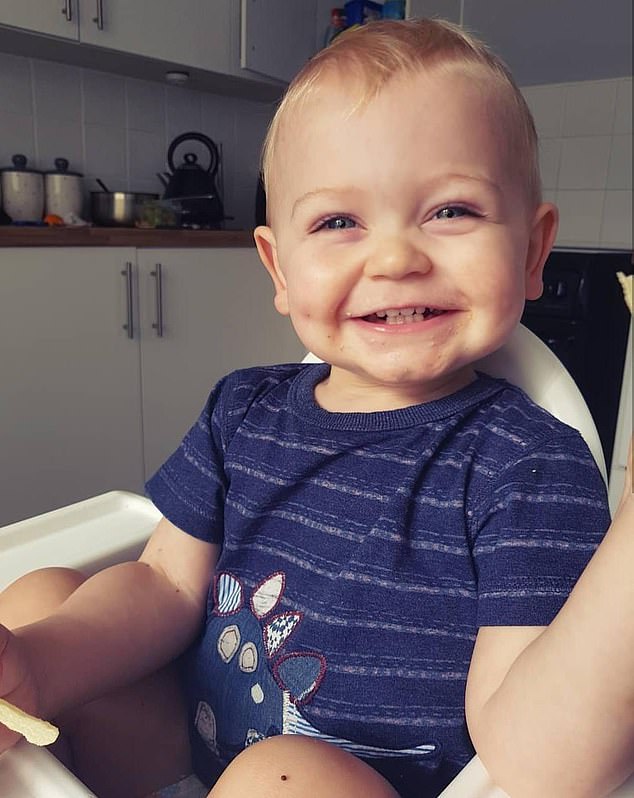 Jack, pictured recently at the age of two, must have an injection of medication every 72 hours in order to keep bruising to a minimum and help the blood to clot

The couple were shocked when doctors began interrogating them about how he had been hurt.

Mrs Fearns, 27, said: ‘The doctors were asking all sorts of questions about how the bruises got there. Lots of photos were taken.

‘We were asked if we were abusing him. It was incredibly stressful. We knew we hadn’t caused them and that something was wrong with Jack. But instead of looking for the cause, they were pointing the finger at us.

‘Not every child with bruises is being abused. That was one of the lowest times for us. We think a blood test should be done before doctors start quizzing parents.’

Haemophilia is a rare condition that affects the blood’s ability to clot. It’s usually inherited, and most people who have it are male.

Normally, when you cut yourself, substances in the blood known as clotting factors combine with blood cells called platelets to make the blood sticky. This makes the bleeding stop eventually.

People with haemophilia don’t have as many clotting factors as there should be in the blood. This means they bleed for longer than usual.

There are several different types of haemophilia. The following two are the most common:

There’s no cure for haemophilia, but treatment usually allows a person with the condition to enjoy a good quality of life.

Genetically engineered clotting factor medicines are used to prevent and treat prolonged bleeding. These medicines are given as an injection.

Haemophilia occurs in about one of every 5,000 male births, according to the CDC. Currently, about 20,000 males in the US are living with the disorder.

In the UK, figures suggest there are 2,000 sufferers of the condition.

A blood test revealed Jack had the lifelong condition haemophilia A, the more common of the two types caused by a lack of clotting factor VIII.

The severity of haemophilia that a person has is determined by the amount of factor in the blood, and Jack has the most severe.

Figures suggest there are 2,000 sufferers of the condition in the UK, while estimates state there is nearly 10 times that amount in the US.

Mrs Fearns, Jack’s full-time carer, said: ‘He is the first of our family to have it, I’d never even heard of it. We have an older son Thomas, now five, who is not affected.

‘Mum is a symptomatic carrier which means she too has very low levels of Factor VIII in her blood. She has bruised easily her whole life and never knew why.’

It’s a sex-linked genetic disease, carried by females, who have a 50/50 chance of passing it on to sons.

There is no cure for haemophilia, and immediately after Jack’s diagnosis, his parents were told he’d need treatment for the rest of his life.

Patients are given prophylaxis injections, which inject a synthetic form of the clotting agent Factor VIII into their blood.

Jack must have an injection of medication every 72 hours in order to keep bruising to a minimum by helping the blood to clot. 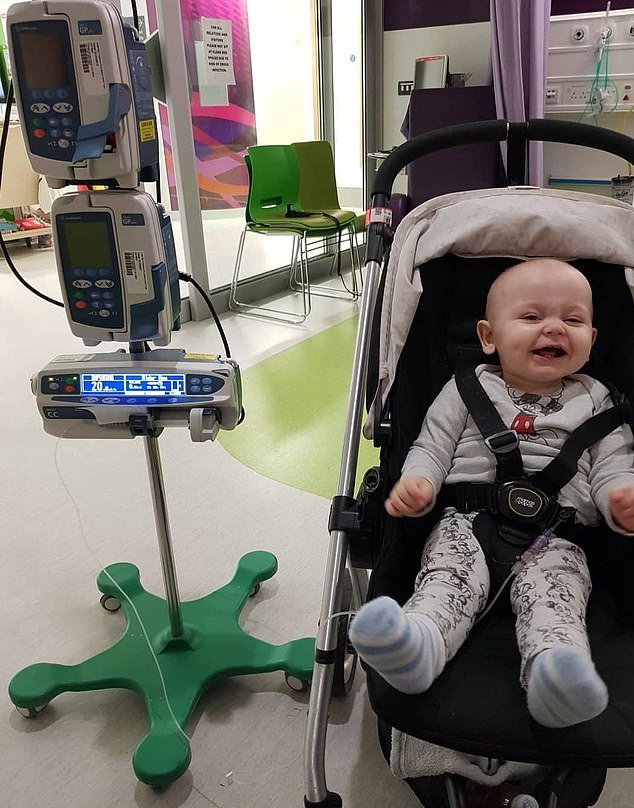 Mr and Mrs Fearns were shocked when doctors began interrogating them about how Jack had been hurt and said blood tests should be run first. He is pictured at hospital 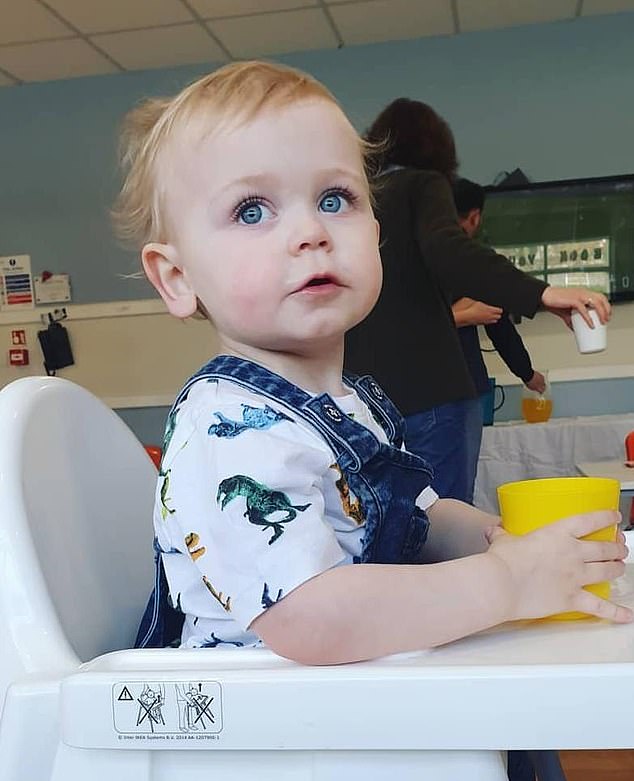 Any knock or fall could cause Jack to have a serious bleed and, in some cases, to the head for example, it could be life-threatening. Pictured at a younger age

But as yet he’s had no serious accidents. He did have a spontaneous bleed in his ankle in May 2019 and the unpredictability of his illness is tough on the family.

Mr Fearns said: ‘We want to give Jack the best quality of life we can.

‘It’s extremely important we don’t wrap him in cotton wool. It’s hard if I have a play wrestle with his brother as I don’t want Jack to feel left out. But we need him to know his limits, it’s a fine balancing act.

‘As he gets older, Jack won’t be able to play contact sports. We live in a rugby town and a lot of his friends will play, it will be a big part of his school life and that may be hard.

‘As parents, we worry that he may rebel against what we tell him and try it. We just have to make sure he knows the risks. At the moment, if he does have an accident, we are there to administer his injections. That might not always be the case.’

The couple got married in March and are unlikely to honeymoon because they prefer to be by Jack’s side.

Mrs Fearns said the condition had changed their lives, particularly because they have to deal with strangers wondering why Jack is bruised. 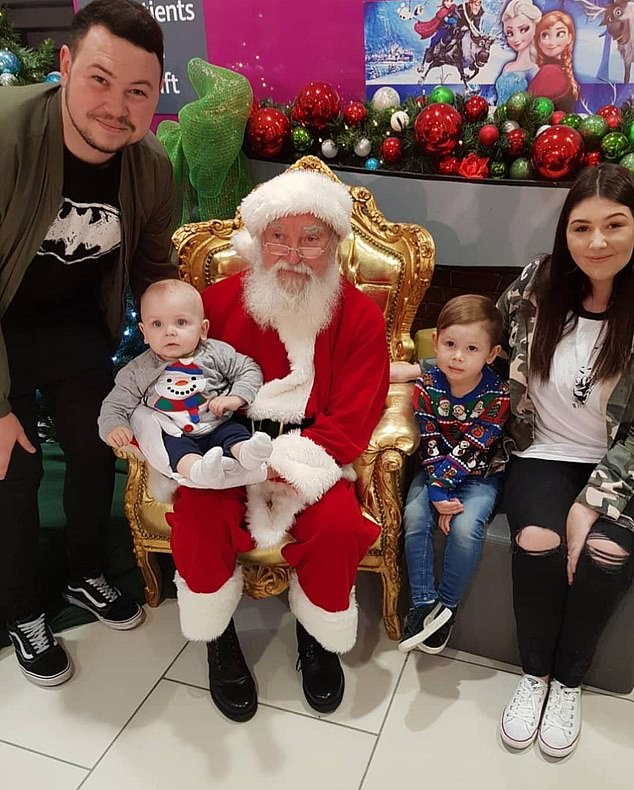 Mrs Fearns said the diagnosis had been difficult but the family had grown stronger. She is pictured with Mr Fearns, Jack, and their other son, Thomas, five, at Christmas

She said: ‘I hate putting Jack in shorts in the summer as I worry what people will think.

‘The bruises on his legs can be horrific and you know what people are thinking, those awkward glances.

‘It’s hard as a parent when you’d do anything to protect your child.’

The family has got stronger since Jack’s diagnosis and hope to help charities such as The Haemophilia Society, who ‘were there for us when we felt there was no hope’ and introduced Jack to a Paralympic swimmer with the condition.

Mrs Fearns said: ‘One of our biggest aims has been to change the public perception of what haemophilia is.

‘No matter how hard it gets, you can still live a very happy and normal life. You can get married, have kids, or a career. It doesn’t have to hold you back.

‘When Jack grows up, I’d really like for him to be an advocate of the condition. I’d like him to be part of the community which has been so amazing to us.’