A five-year-old boy who has been off school for seven months because he has life-threatening cancer can finally attend his lessons – using a robot.

Oscar Saxelby-Lee, from Worcester, was diagnosed with leukaemia in December and is now in hospital having intense treatment.

He had been unable to go to his Reception year lessons at Pitmaston Primary School but can now watch them through a video link and contribute with his friends.

Oscar was ‘over the moon’ at being able to get at least a little bit of normality back, his mother said, and his friends cheered when it was switched on for the first time.

He is recovering from a bone marrow transplant which was a last-ditch attempt to get rid of his cancer, after he inspired thousands of people to turn up to find out whether they were a match at an event at his school in March. 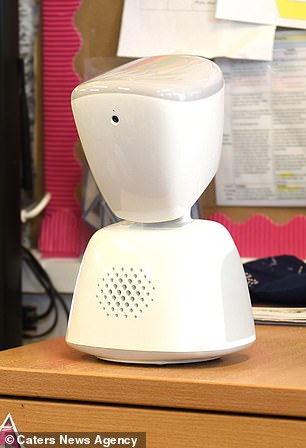 Oscar Saxelby-Lee (left), from Worcester, hasn’t been able to go to school since being diagnosed with acute lymphoblastic leukaemia in December. But now, thanks to the AV1 ‘Ozzybot’ (right) he can watch his teachers and school-friends live through a camera and microphone feed linked up to a tablet or smartphone in his hospital bed

‘Oscar was over the moon, his face lit up completely,’ said his mother Olivia Saxelby, 24.

‘It was the first time he’d had a class registration since December so he was really overwhelmed.

‘It was an incredible feeling for us as parents for him to get some normality back in his life.’

Oscar can now see and hear what’s happening in his classroom thanks to a £300-a-month ‘Ozzybot’ robot provided through the Grace Kelly Childhood Cancer Trust.

The robot has a camera which live streams lessons to a tablet or smartphone in his hospital bed, and a speaker allows him to talk to people on the other end.

It is small enough to be moved about and can rotate to give Oscar a 360° view of the room.

Also known as AV1, the robot even has built-in eyes which let Oscar communicate how he’s feeling in class with modes for happy, sad or confused.

Oscar’s story hit headlines in March when his parents launched an appeal to find a stem cell match who could give their son a bone marrow transplant.

Doctors had given Oscar just three months to live unless a donor was found. 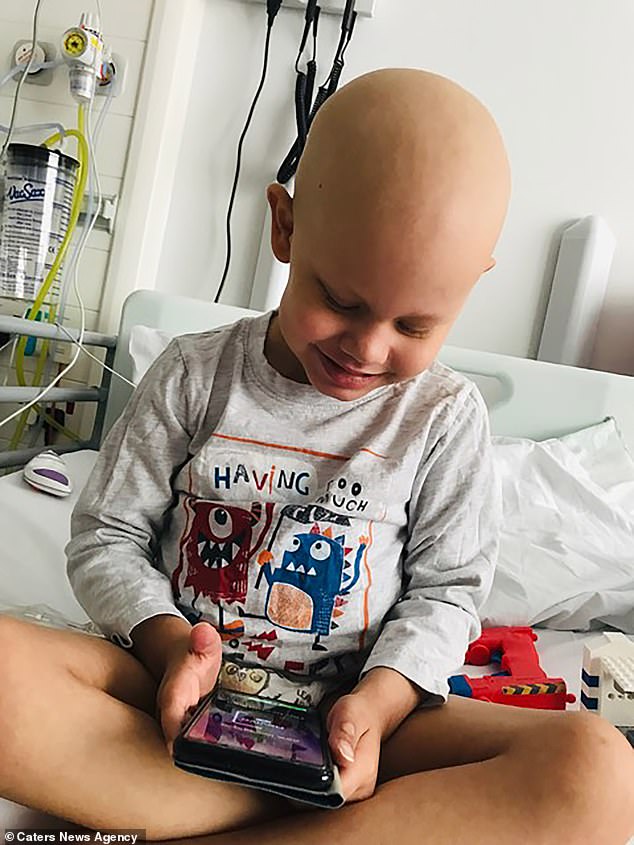 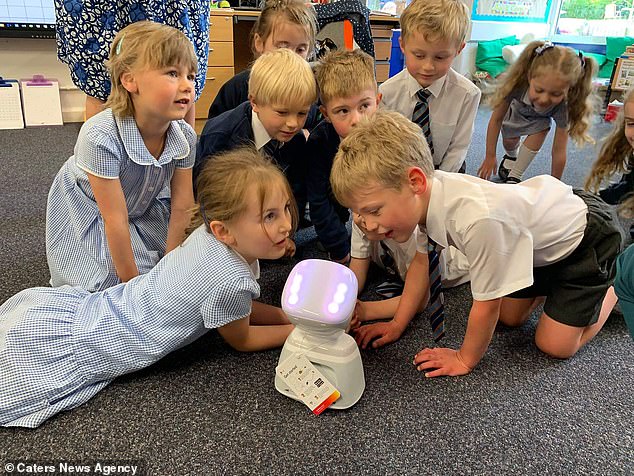 Oscar’s headteacher, Sue Bladen, said: ‘When Oscar took part in his first school registration this week since December saying “Good morning Mrs Keating” the joy, emotions and cheers from his friends, as you can imagine, were overwhelming’ (Pictured: Oscar’s classmates talk to him through the robot) 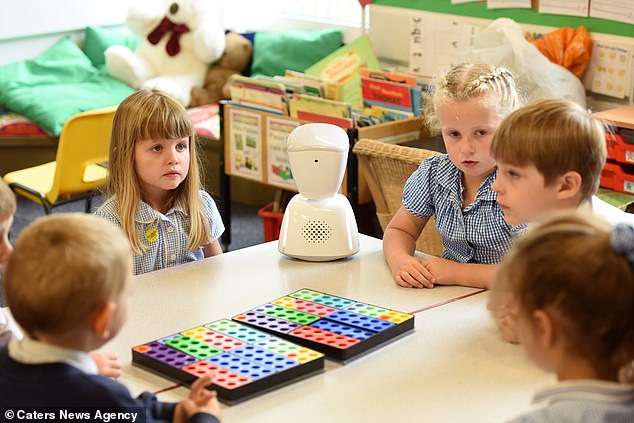 Oscar has been loaned the AV1 robot by a charity called the Grace Kelly Trust – it costs £300 per month for a child to use one (Pictured: Oscar’s robot at a table with his classmates) 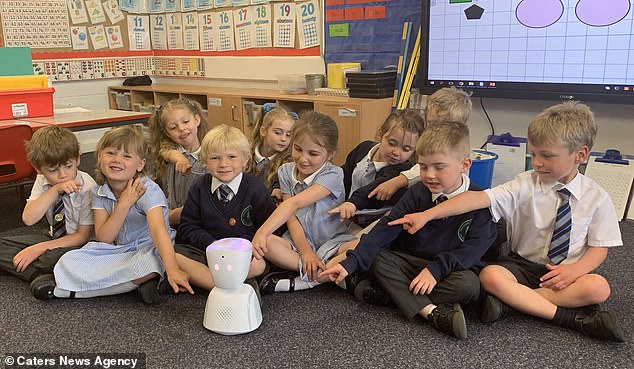 Olivia Saxelby, Oscar’s mother, said her son’s face ‘lit up’ when he first used the robot, adding: ‘It was an incredible feeling for us as parents for him to get some normality back in his life’

But thanks to a massive turnout of 4,855 people at a swab session at his school, a match was found and Oscar has now had the life-changing treatment.

Although it is yet to be seen whether it has worked and knocked his cancer back, Oscar appears to keen to carry on with his old life.

His headteacher, Sue Bladen, said: ‘This truly is technology working at its best – we are so thrilled to be able to have Oscar’s “Ozzybot” in the classroom so that Oscar can be part of his class, interact with his friends and be a part of the school day.

‘We are very grateful to The Grace Kelly Foundation for funding AV1 to ensure that Oscar, although in isolation in hospital, feels included and part of his class.

‘When Oscar took part in his first school registration this week since December saying “Good morning Mrs Keating” the joy, emotions and cheers from his friends, as you can imagine, were overwhelming.’

Oscar has T-cell acute lymphoblastic leukaemia (ALL), a rare illness and only affects around 650 people in the UK each year, around half of whom are children.

It is a fast-growing, aggressive cancer which causes large numbers of underdeveloped white blood cells to be released from diseased bone marrow.

These blood cells continue to spread and cause symptoms like tiredness, difficulty breathing, pale skin, fever, and bone and joint pain.

Before his transplant Oscar had had more than 20 blood transfusions and four weeks of chemotherapy.

Jennifer Kelly, from the Grace Kelly Trust, said: ‘It was an honour to go into Oscar’s school and work with them to make this possible.

‘To see Oscar’s beaming face on seeing his classmates is absolutely amazing we are absolutely delighted that Grace’s legacy is making this possible.

‘Since we released this announcement on social media, we have been approached by two other families in Worcester.

‘Their children also have cancer and are hugely isolated. They are hoping that we can help their children too.’

It costs £900 to sponsor an AV1 machine for a child for three months, and the charity is appealing to more individuals and businesses to donate.

Miss Saxelby added: ‘He can log on whenever he wants from his hospital bed so it’s great that he can finally get some routine.’

To give to the Grace Kelly Trust’s AV1 fund through a fundraiser set up by Oscar’s family go to their Virgin Money Giving page.