A man who king hit and dragged a man across the road in a one-punch attack before leaving him lying unconscious has been jailed.

Brad Cameron Smith pleaded guilty in Southport Magistrates Court on Friday to assault causing bodily harm, after he struck another man in Southport on the Gold Coast on March 4.

Smith claimed in court the man spat at his girlfriend and abused him and a group of friends before his shocking attack.

A man who hit and dragged a man the road in a one-punch attack, before leaving him lying unconscious, claimed he was provoked

CCTV footage caught the attack, and showed the victim collapsing on the road as Smith walked away, before returning to drag him to the footpath.

Smith was arrested the following day and sentenced to 15 months jail on Monday, reported the Gold Coast Bulletin.

The victim was unconscious on the road after the attack until he was taken to hospital by paramedics.

‘Mr Smith has expressed his remorse for his actions demonstrated in his apology within the documents tendered to the court,’ she said.

‘[He] has indicated that he intends to use his time in custody positively to work on his rehabilitation and to continue once released in the community, to become a contributing member to society.’ 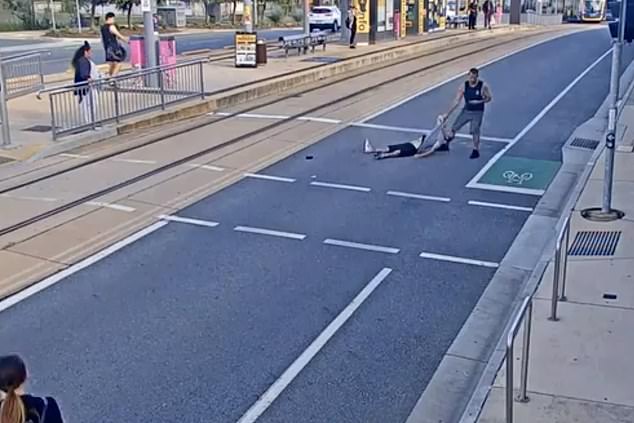