A brand new Air New Zealand plane was forced to turn around at the Iranian border after departing a airbus facility because of an error with paperwork.

The A321neo, which was being delivered to Auckland, was forced to make a U-turn 39,000 feet above Erzincan, Turkey, because it hadn’t received clearance to fly over Iran.

Flight NZ6093 had travelled almost four hours on February 15 when it was forced to return to Hamburg, Germany, amid the mishap.

The plane had departed from a production base in Hamburg in preparation for commercial use.

The problems occurred days after another Air New Zealand flight, NZ289 to Shanghai, was forced to return to Auckland because of a lack of Chinese regulatory approval.

A spokeswoman told Daily Mail Australia a tight flight schedule in Hamburg meant the aircraft took the risk to leave before the paperwork had been cleared.

‘In this case, a last minute delay in the delivery process meant that in order to land in Oman on time, we needed to depart Hamburg before clearance paperwork had been received to overfly Iran.’

‘We had received assurances by our delivery flight planning agent that the Iranian clearance paperwork would come through during the flight.’

‘Unfortunately this was not received in time and the decision was made to return to Hamburg.’ 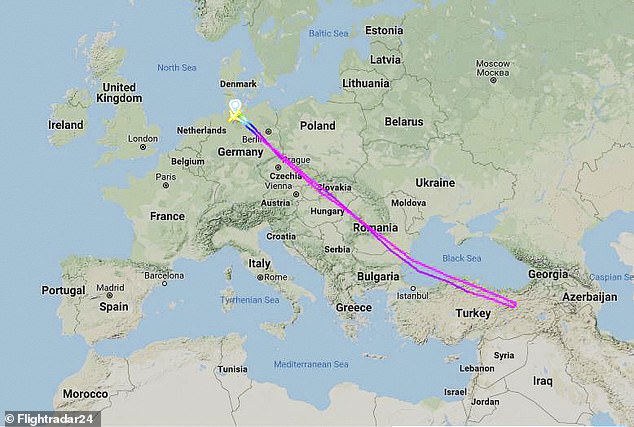 Flight NZ6093, a delivery plane, had travelled almost four hours on February 15 when it was forced to return to Hamburg, Germany

‘While the turn back is unfortunate, the nature of obtaining a chain of interlinked clearances means scenarios of this nature are not uncommon.’

The plane is due to arrive in Auckland on Thursday evening after stopping in Oman, Kuala Lumpur and Cairns.

The Air New Zealand spokeswoman said all aircraft are required to get clearance to fly through any airspace on its flight path.

The turned back flight was the fourth aircraft to leave the airbus facility in Hamburg.

‘Our previous delivery flights have travelled from Hamburg to Auckland via Oman, Kuala Lumpur and Cairns and required around a dozen different overflight clearances en route,’ the spokeswoman said.

‘Each clearance process is managed differently and has different application deadlines and parameters.’

Iranian airspace is constrained by strict laws which led the United States to release a warning in 2018 for aircraft flying in the area.

The Flight Service Bureau warned the deteriorating relationship between the US and Iran had to be taken into consideration when opting for a flight path over the area, due to concerns over military activity.