Brandon Lewis today defended Downing Street over its failure to disclose that the UK’s top civil servant Sir Mark Sedwill had coronavirus at the same time as Boris Johnson amid a growing secrecy row.

The Prime Minister tested positive for the disease on March 27, and Sir Mark is thought to have found out he also had the virus at the start of April.

But Number 10 only confirmed yesterday that Sir Mark had had the virus – approximately six weeks after the fact.

It means Mr Johnson, Sir Mark, Health Secretary Matt Hancock and the PM’s top aide Dominic Cummings were all battling coronavirus at a similar time raising questions over who was running the country.

Downing Street is facing growing questions over why Sir Mark’s illness was not disclosed earlier.

But Mr Lewis, the Northern Ireland Secretary, today insisted ‘business was as usual’ within Whitehall at the start of April despite the heart of government being rocked by the disease.

Brandon Lewis, the Northern Ireland Secretary, today insisted ‘business was as usual’ within the Government at the start of April despite key players catching coronavirus 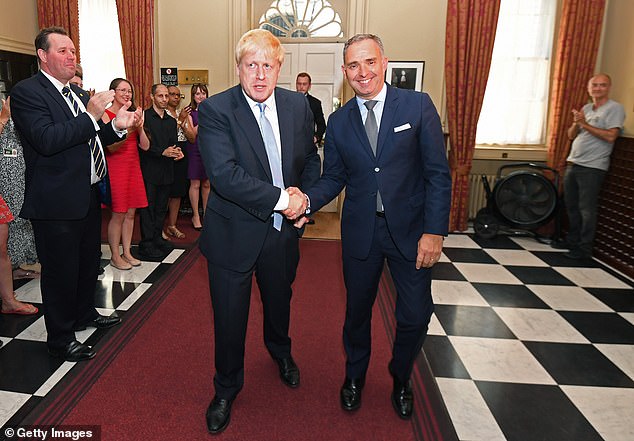 Sir Mark Sedwill, pictured with Boris Johnson inside Number 10 on July 24 last year, had coronavirus at the same time as the PM 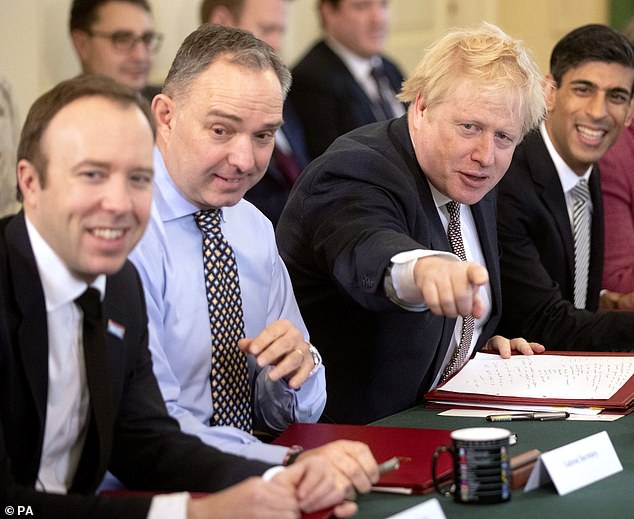 The revelation means that (from left) Health Secretary Matt Hancock, Sir Mark and Mr Johnson were all battling coronavirus at a similar time

Mr Lewis also claimed it did not matter that Cabinet ministers had not been told about Sir Mark because he was ‘playing a full part and working continuously from home’.

Told that as a Cabinet minister he should have been made aware of the situation, Mr Lewis said: ‘My focus would be on the ability of somebody to do their job. Mark Sedwill is the Cabinet Secretary and he continued to do his job.

‘I have worked with Mark at the Home Office and in his role as Cabinet Secretary and I have to say my experience of working with Mark has always been an excellent one.

‘He is somebody who has always been in my experience pretty much on top of his game no matter what the situation.’

Mr Lewis was told during an interview with the BBC this morning that it was ‘odd’ such important information was held back from Cabinet ministers.

‘And at all times that was the case. I have never had an experience where I could not deal with or was unable to access the Cabinet Secretary should I needed to do so.

‘I have to say my experience was that business was as usual and things were carrying on and that is what I would expect from the Cabinet Secretary.’

One Tory MP told MailOnline that Sir Mark’s illness ‘should have been disclosed publicly’ at the time and added: ‘The Government views this coronavirus outbreak as a war and the first casualty of war is the truth.’

Though not particularly well known, Sir Mark’s role as Cabinet Secretary makes him the second most powerful figure in government, executing the Prime Minister’s will on a daily basis.

Number 10 was grilled almost daily about the health status of key government players before and after Mr Johnson tested positive amid concerns about the whether the Government was continuing to function effectively.

The Prime Minister’s Official Spokesman said yesterday he had only become aware ‘recently’ of Sir Mark having had coronavirus after he was told by a journalist.

Told that Number 10 had previously always insisted Sir Mark was fine, the spokesman said: ‘Your recollection is entirely right.

‘You were asking me about the Cabinet Secretary and I said throughout that he was working as normal which he was.

‘He continued to carry out his duties in full so I was only aware very recently when it was pointed out to me by a journalist. 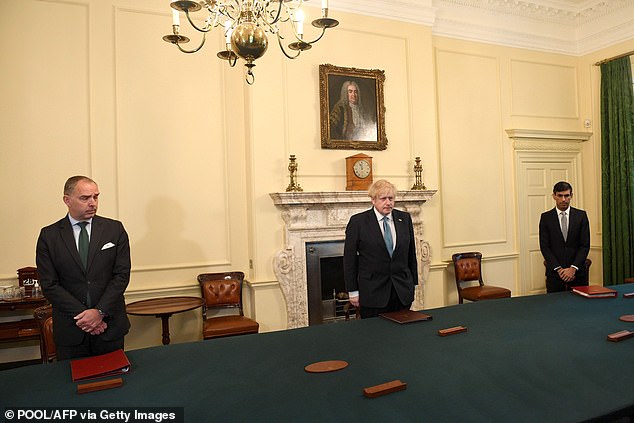 Number 10 yesterday said Sir Mark, pictured alongside Mr Johnson and Rishi Sunak on April 28, had ‘continued to carry out his duties in full’ while working from home during his illness

‘The Cabinet Secretary was carrying out his duties in full and I was seeing him everyday chairing the meetings via Zoom.’

Asked directly if Sir Mark had coronavirus at the same time as the PM, the spokesman said: ‘He worked from home as usual throughout.

‘You will remember at the time most people were working from home so there is nothing unusual about that.’

The spokesman said he was unaware exactly when Sir Mark had developed coronavirus symptoms.

The fact that a handful of people at the top of the government caught coronavirus has previously prompted intense scrutiny of its handling of the outbreak.

Prime Minister Johnson and Mr Hancock were criticised at the time when they were pictured at close quarters in the Commons – well within the advised 6ft limit.

Senior officials including Sir Mark and Chief Medical Officer Chris Witty were also photographed close to the PM in Downing Street for conference meetings with a digital cabinet.

Ministers have always dismissed accusations that positive tests at the heart of government showed they had taken the wrong approach, insisting that it simply demonstrated the indiscriminate nature of the disease. 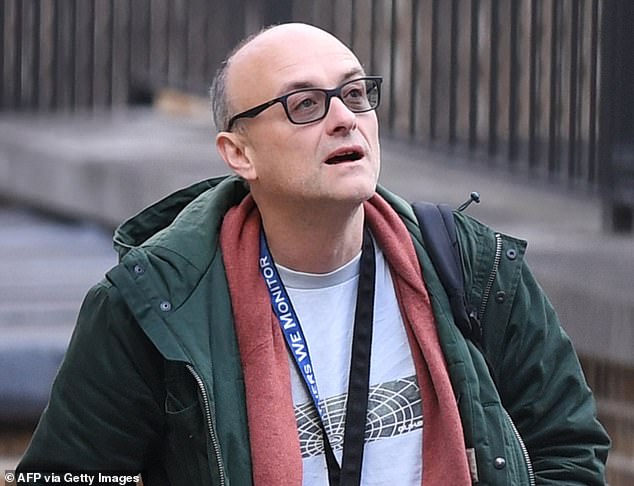 The PM’s top aide Dominic Cummings also developed symptoms of coronavirus, with his wife saying that he was so ill that she believed he should have gone to hospital 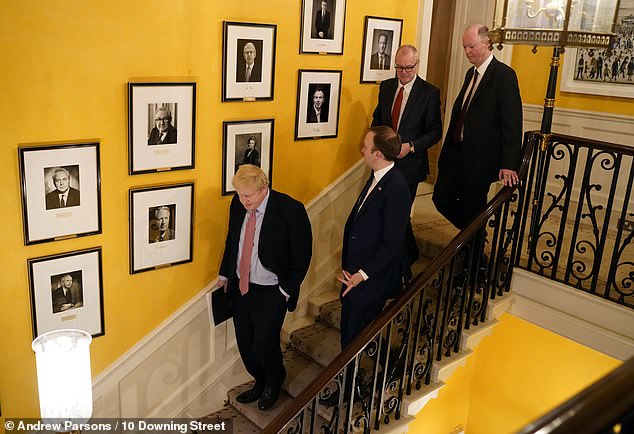 Boris Johnson pictured within six-foot of Health Secretary Matt Hancock before a press conference at No10 Downing Street on March 12. Both tested positive for the virus while chief medical officer Chris Whitty, pictured at the top of the stairs, had symptoms

Mr Johnson was then admitted to hospital on April 5 and moved to an intensive care unit on April 7 before being released on April 12.

He spent a number of weeks recovering at Chequers before returning to work on April 27.

Mr Johnson said of his illness that there were ’48 hours when things could have gone either way’.

Mr Hancock spent a week in self-isolation after his positive test. He said it had felt ‘like having glass in my throat’ and that he had lost half a stone in just seven days.

Meanwhile, Mr Cummings’ wife revealed last month that her husband was so ill with coronavirus that she believed he should have gone to hospital.

Journalist Mary Wakefield revealed that Mr Cummings, 48, spent 10 days bedridden with the disease after coming home to nurse her through a milder case.