A brave news reporter has warned violent anti-vax protestors that she will not be intimidated as Melbourne braces itself for a third day of wild demonstrations.

Channel Nine reporter Christine Ahern found herself at the mercy of a demonstrator as she tried to provide an update on the scene in Melbourne’s CBD on Wednesday.

‘We’re marching with the second group of protestors, we’ve been following them all around the city and now we’re going up Swanston street,’ she says.

A group of men clad in fluorescent-yellow vests begin to heckle at the reporter, forcing her to apologise for their crude language.

‘I do apologise for the language, one again they are very fired up and unfortunately at the media as well,’ she shouts over the noise of the protestors.

One man passing the live-cross tries to roughly grab the microphone from her hands before turning his attention to a man taking photos of the unruly crowds.

‘I’m ok, I’m ok,’ she reassures her colleagues as protestors sound air horns and gesture aggressively into the camera.

One man wearing a black balaclava and large ski goggles is heard yelling ‘fake news, it’s fake news’ as he passes the media.

‘Look we’re not going to be intimidated, we’re going to keep on giving you what is happening here,’ the brave reporter continues.

‘I’ve been hearing them say “keep moving, keep moving away from the police” because there are some police that are following us.

‘Police are determined for this not to become another game of cat and mouse but it’s exactly what it’s turned into again.’ 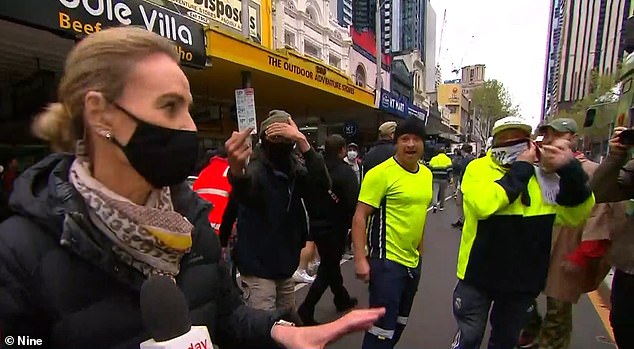 ‘Look we’re not going to be intimidated, we’re going to keep on giving you what is happening here,’ the brave reporter continued as men clad in tradie uniforms heckle at the camera

Ms Arhern’s altercation with the angry protestors comes just 24 hours after her TV colleague Paul Dowsley copped his own share of abuse.

The veteran newsman was reporting on the second day of anti-vax protests when he was jumped by one demonstrator who grabbed him around the neck.

He said during his time at the scene in Melbourne’s CBD he was spat on, doused with urine, including in his mouth when open bottles were thrown at him.

‘My colleague myself and I are covered in what I understand to be urine,’ he revealed live on air as he described how he had been attacked while covering the protest.

‘To put it lightly, I’m not a fighter, I’ve never thrown a punch in my life, so in those situations I thought I’d be quick to make a move.

‘But that guy came in to my side very quickly – I did my best to get out of what felt like a headlock.

‘My [cameraman] colleague Rick who was standing on a seat trying to get an elevated shot, jumped down with his camera and came to my assistance.

‘Some other people came in and tried break it up – they did try to defuse it.

‘I will give credit to some protesters who stopped in the minutes after to check I was OK and one made a point of telling me that’s not what they were about.

‘He was disgusted by any attack like that on media.’ 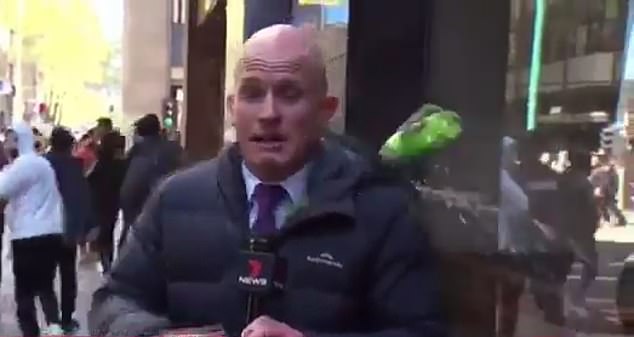 Reporter Paul Dowsley (pictured) said during his time at the scene in Melbourne’s CBD he was spat on, doused with urine, including in his mouth when open bottles were thrown at him 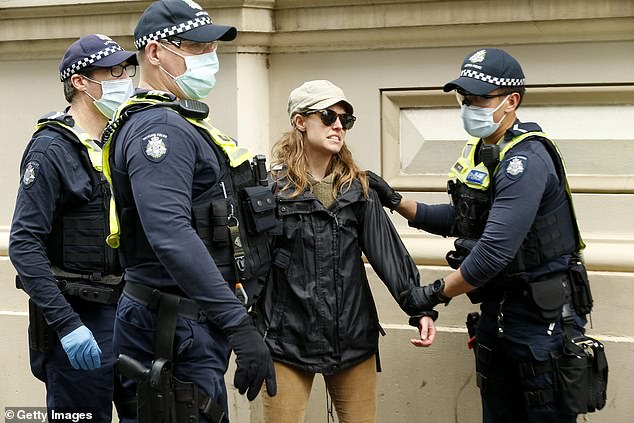 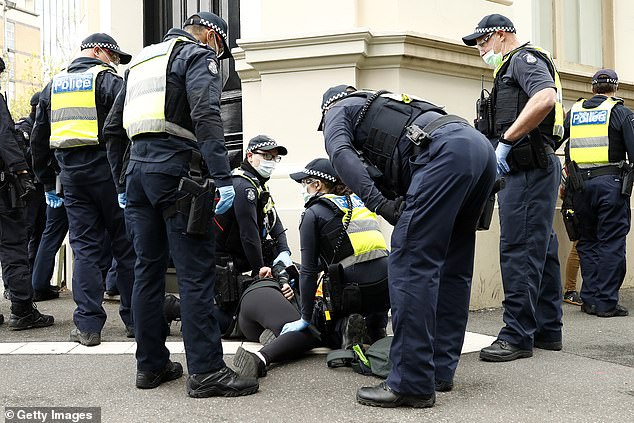 Several demonstrators have already been arrested in Melbourne as they return to the streets for another day of protest against mandatory Covid vaccinations.

Another video showed around 20 riot squad officers marching swiftly down Elizabeth Street in the city centre.

Police have vowed they would be better prepared for violence since being caught off guard on Tuesday when crowds turned on both attending media and police.

About 2,000 tradesmen and anti-vaccination and freedom campaigners rampaged through the city for ten hours on Tuesday to demonstrate against a two-week shutdown of the construction industry imposed due to rising Covid cases.

Protesters first gathered outside CFMEU’s boarded-up union head office on Tuesday morning, only a day after the building was badly damaged in violent demonstrations on Monday.

The crowds then marched to Victoria’s parliament building while chanting ‘f**k the jab’ and singing Advance Australia Fair.

Protesters are also using encrypted platform Telegram to call for an end to lockdowns, mandatory mask orders and the immediate reopening of the construction industry.

Protesters also called for a royal commission into the government’s response to the pandemic and for officers they claim ‘assaulted peaceful protesters’ to be charged.

Their final demand was for the ‘mass distribution of invermectin, Vitamins C, D and Zinc’ as alternative treatments for Covid-19.

Invermectin, a horse tranquiliser used to treat parasitic infections, has not been proven to be effective in treating the virus. 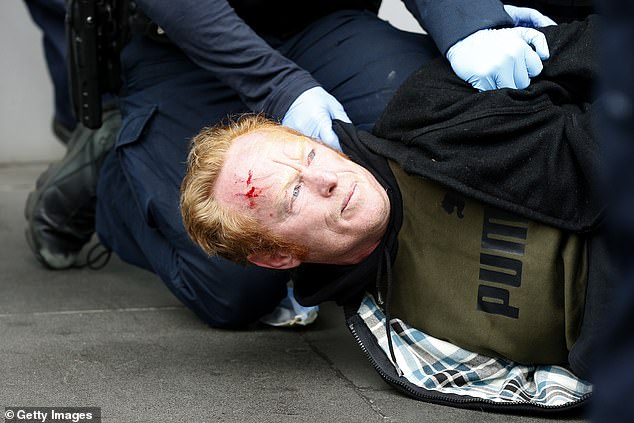 Around 20 riot squad officers have been seen marching swiftly down Elizabeth Street in the city centre in response to the violent scenes witnessed the day previous (pictured, police arrest a man on Elizabeth street on Wednesday) 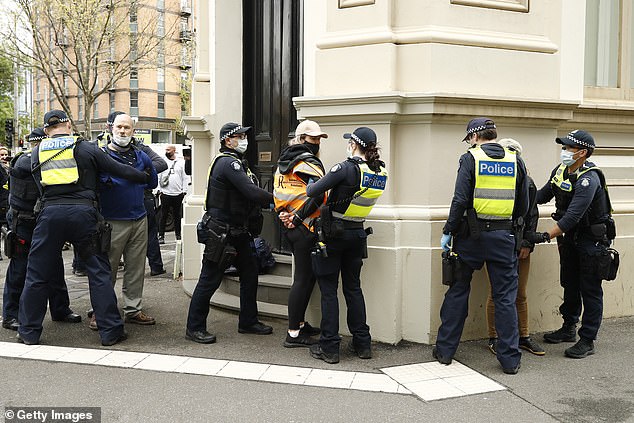 Police have vowed they would be better prepared for violence since being caught off guard on Tuesday when crowds turned on both attending media and police (pictured, police detain protestors near the CFMEU building on Wednesday) 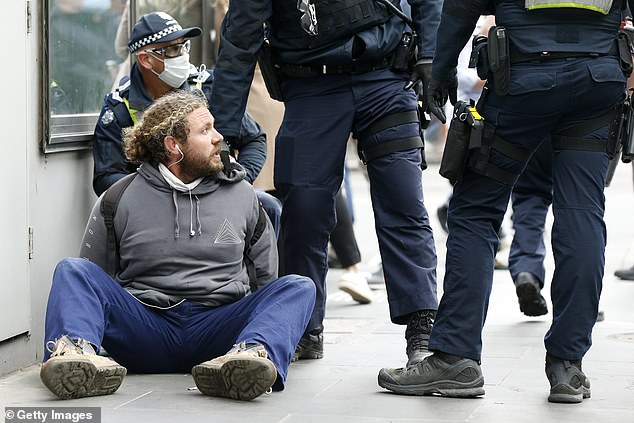 Protestors have returned to the streets to protest mandated Covid-19 vaccinations for the third consecutive day (pictured, police arrest a man in Melbourne on Wednesday)

Police have arrested 62 people were arrested on Tuesday after wild videos circulated social media of officers being attacked with fists, bottles and other projectiles.

Daniel Andrews blasted violent protesters who caused chaos in Melbourne as police vowed to use new tactics to fight back with more carnage expected on Wednesday.

Mr Andrews said the actions were an ‘insult’ to the majority of law-abiding tradies and said the protesters were not just builders but also far-right freedom and anti-vaxx protesters.