Brave people of Moscow dare to speak out against Ukraine invasion

Brave critics of Vladimir Putin living in Russia today spoke out to accuse him of wrecking their country and ‘starting World War Three’ as protesters took to the streets of more than 50 cities despite the threat of being charged with treason.

Thousands marched amid claims Putin may have ‘overplayed his hand’ with an invasion of Ukraine his critics hope will sink him – and some were interviewed by the foreign press including the BBC despite knowing the Kremlin would be watching.

One woman broke down and said she ‘can’t stop crying’  while another protester said: ‘Most Russians don’t support this. It’s horrible’.

While the protest numbers in a country of 180million were in the low thousands, their bravery has been hailed around the world because of Putin’s policy of smashing protests and jailing his enemies.

They also spoke out despite facing near-certain arrest and imprisonment because the Kremlin says ‘negative comments’ about Putin’s invasion of the Ukraine would be treated as ‘treason’. And despite this Facebook was awash with Russians angry about the war.

Dmitry Muratov, the editor of Russia’s only anti-Putin newspaper who won the 2021 Nobel Peace Prize, says they will publish the next version of Novaya Gazeta in two languages ​​- Ukrainian and Russian – declaring: ‘We do not recognize Ukraine as an enemy’

Branded ‘Russia’s bravest man’ because of his vocal opposition to Putin, told the BBC that the day of the invasion brought ‘shame’ and would go down as the day ‘Russia’s future was taken away from it’, adding: ‘Our peace-loving Russian people will now feel the hatred of the world because we are starting a third world war in the centre of Europe.’  He added: ‘Only the anti-war movement of the Russians can save life on this planet’.

More than 1,000 people had their banners torn up and were dragged into custody as they marched the streets of Moscow close to the Kremlin chanting ‘No to war!’ as passing cars honked their horns.

One man told the BBC: ‘There is a sense of horror and a sense of shame about what our authorities are doing. In my circle of friends this is a very common feeling. I never voted for those who are in power now and I did what I could, what a person in Russia is currently able to do to affect political life – went to protests. But I don’t think there will be any now. Everyone is much too scared.’

In Putin’s home city of St Petersburg there was a major protest of hundreds of mainly young Russians chanting against the war and the President despite Russia’s Investigative Committee issued a warning reminding them that unauthorized protests are against the law.

‘This is the most shameful and terrible day in my life. I even was not able to go to work. My country is an aggressor. I hate Putin. What else should be done to make people open their eyes?’ Yekaterina Kuznetsova, 40-year-old engineer who joined the demonstration said.

There are hopes that an unpopular war with Ukraine could sink Putin. Defence Secretary Ben Wallace said yesterday that the Russian President  is trying to ‘secure his legacy’, predicting that it would not be the legacy ‘that he wishes’ in a hint that he believes he could be thrown from office. 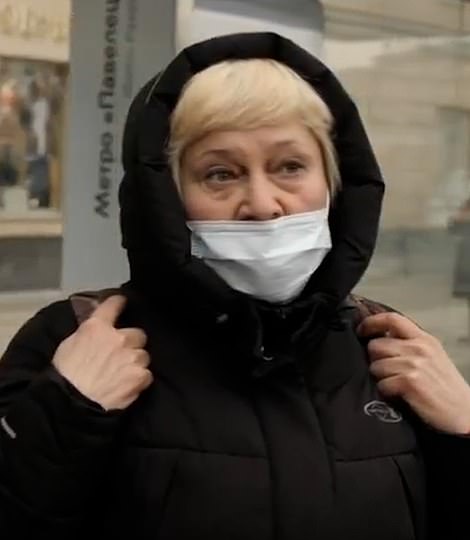 Despite knowing the authorities would be watching, Russians spoke out to say they ‘hate’ Putin and his war with Ukraine despite being told it would be treason 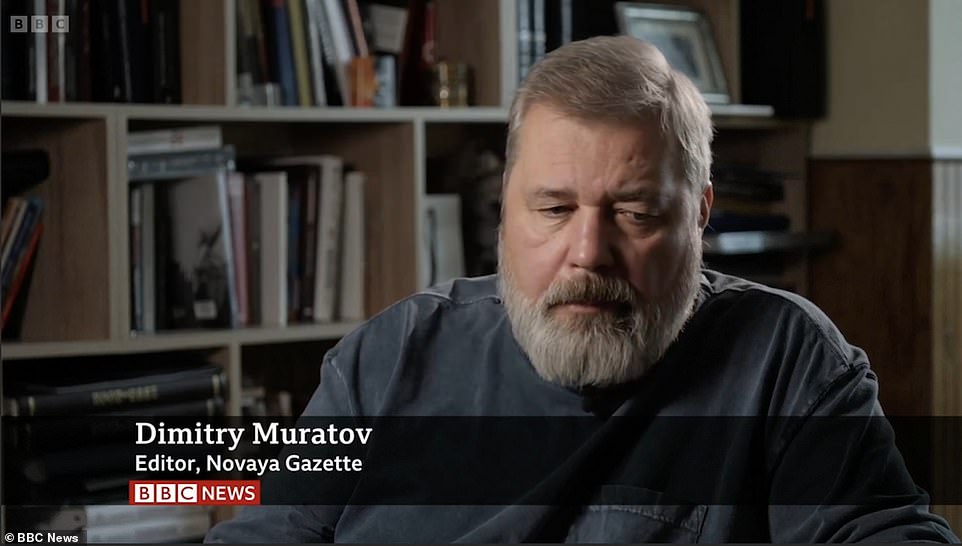 Dmitry Muratov, the editor of Russia’s only anti-Putin newspaper who won the 2021 Nobel Peace Prize, says they will publish the next version of Novaya Gazeta in two languages ​​- Ukrainian and Russian as anger in the country grows 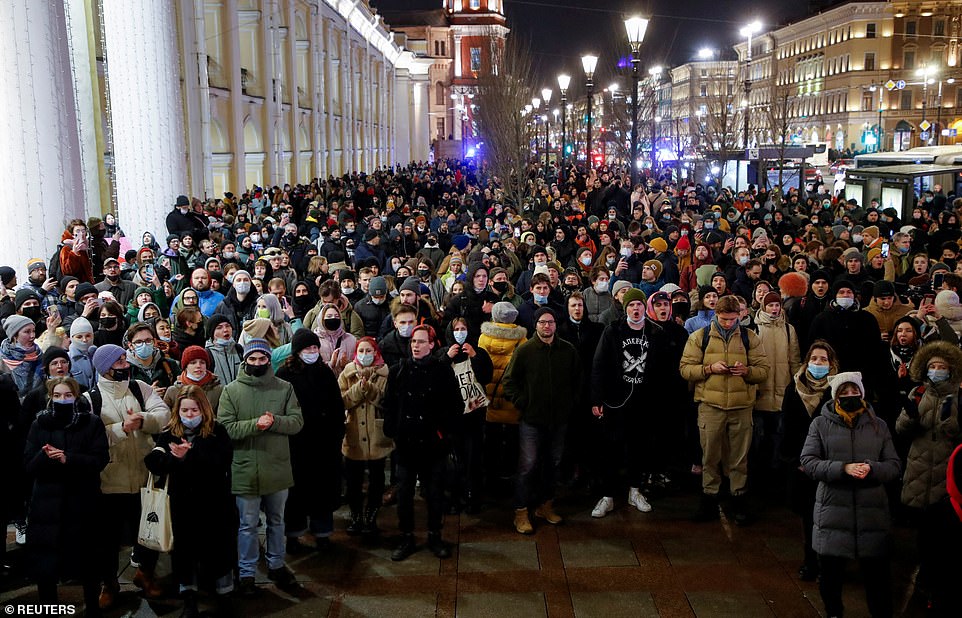 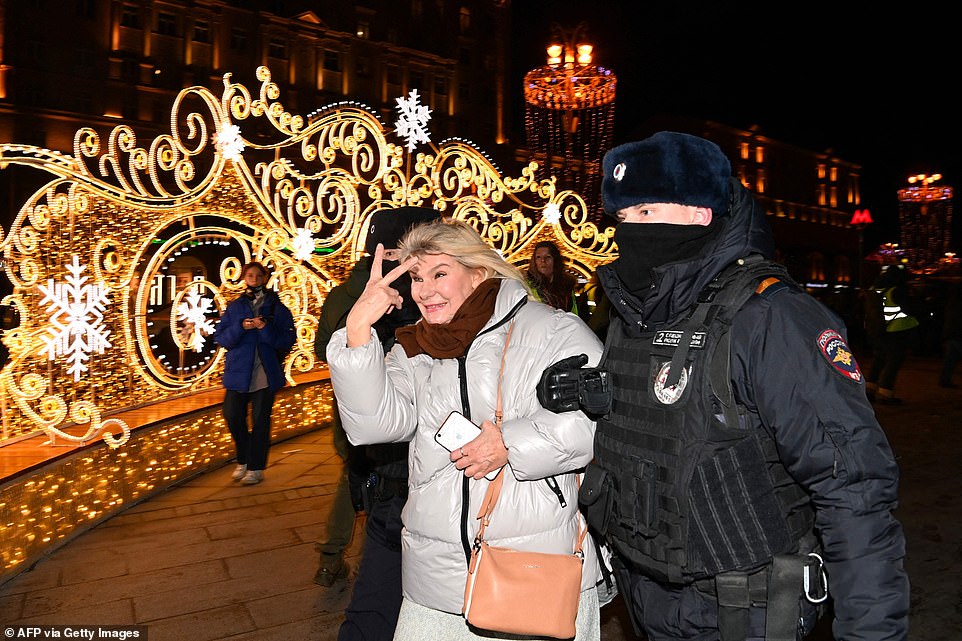 MOSCOW: A woman gestures as she is marched off by Russian police officers in Russia’s capital on Tuesday night 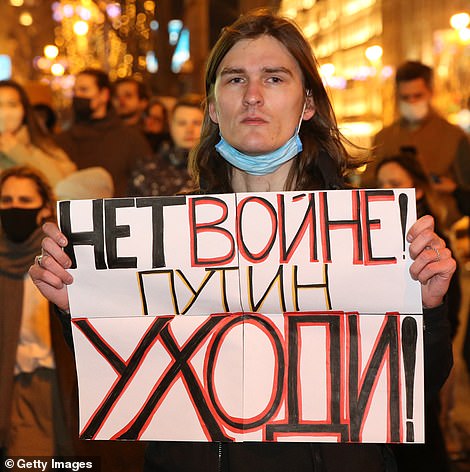 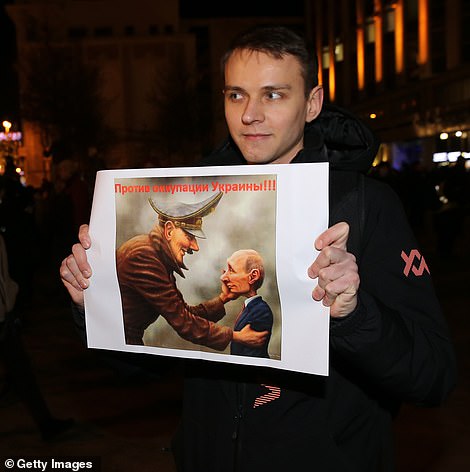 Moscovites with placards reading ‘No war. Putin, go away’ and comparing him to Hitler walked the streets 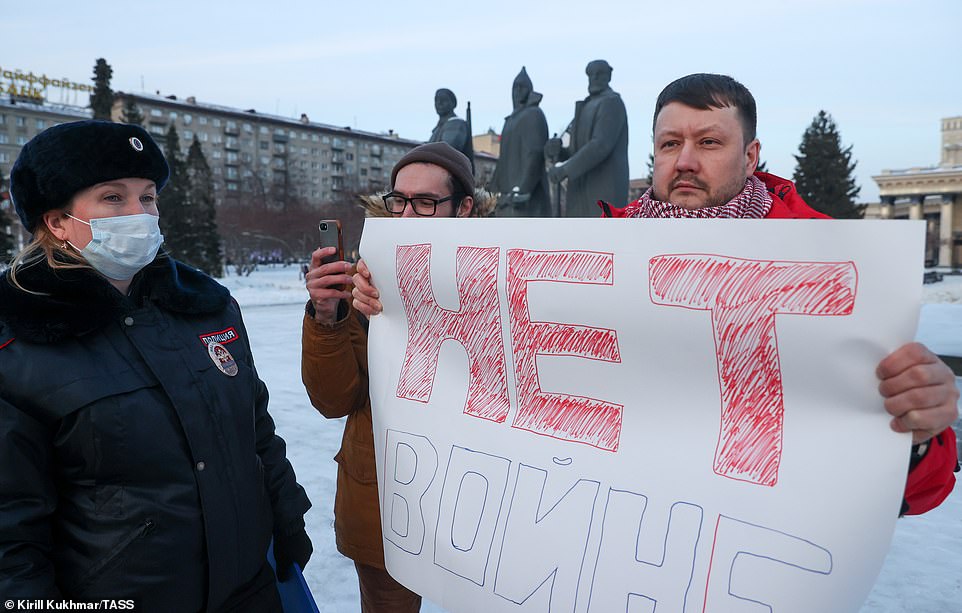 A man holds a placard reading “No” during an anti-war protest in Lenin Square, Novosbirsk in central Russia 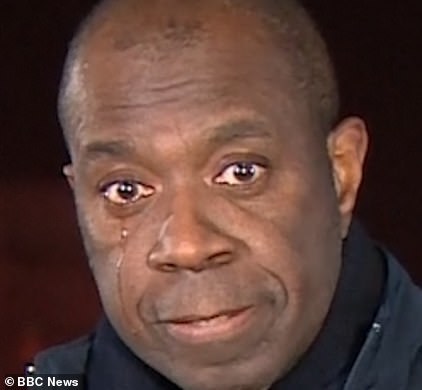 Myrie was reporting live in Kyiv for BBC News at 10 in front of St. Michael’s Golden-Domed Monastery as sirens blared around him.

He told viewers that ‘fierce fighting’ was taking place and said Russia had attacked Ukraine ‘by land, sea and air’ on a brutal day of violence and bloodshed as the invasion got underway yesterday.

Then, as he introduced BBC News international correspondent Orla Gueri, a tear visibly streaked down his face. Dozens took to social media to share their shock at the scene.

One person wrote: ‘Extraordinary! Clive Myrie presenting the @BBCNews at 10 from Kyiv with a tear rolling down his cheek.’

Another said: ‘Wow, a tear ran down the face of Clive Myrie just now while presenting the BBC News at 10.’

While a third said: ‘Extraordinary – Clive Myrie delivering the news from Kyiv with great dignity, and a tear on his cheek.’

The BBC is reporting that there were similar scenes in dozens of cities across the country of 180million people. Some 1,745 people in 54 Russian cities were detained, at least 957 of them in Moscow.

One young man told the BBC: ‘I have been crying all day. People in Ukraine are dying. Children are dying. Men who fight are dying. And then what? We, young Russian men, 19-20 years old will be packed off to fight too?’

Hundreds of posts came pouring in condemning Moscow’s most aggressive actions since the 1979 Soviet invasion of Afghanistan and growing concerns it could tip into a global conflict as Putins tries to piece together the USSR and the Iron Curtain.

Vladimir Putin called the attack a ‘special military operation’ to protect civilians in eastern Ukraine from ‘genocide’ – a false claim the U.S. had predicted would be a pretext for invasion, and which many Russians roundly rejected.

Many people who took to the streets also took to social media.

Tatyana Usmanova, an opposition activist in Moscow, wrote on Facebook that she thought she was dreaming when she awoke at 5:30 a.m. to the news, which she called ‘a disgrace that will be forever with us now.’

‘I want to ask Ukrainians for forgiveness. We didn’t vote for those who unleashed the war,’ she said.

As sirens blasted in Kyiv, Ukraine’s capital, and large explosions were heard there and in other cities, Russians were signing open letters and online petitions demanding the Kremlin halt the assault, which the Ukrainian health minister said had killed at least 57 Ukrainians and wounded dozens more.

One petition, started by a prominent human rights advocate, Lev Ponomavyov, garnered over 150,000 signatures within several hours and more than 330,000 by the end of the day. More than 250 journalists put their names on an open letter decrying the aggression. Another one was signed by some 250 scientists, while 194 municipal council members in Moscow and other cities signed a third.

‘I’m worried about the people very much, I’m worried to tears,’ said Zoya Vorobey, a resident of Korolyov, a town outside Moscow, her voice cracking. ‘I’ve been watching television since this morning, every minute, to see if anything changes. Unfortunately, nothing.’

Several Russian celebrities and public figures, including some working for state TV, spoke out against the attack. Yelena Kovalskaya, director of a state-funded Moscow theater, announced on Facebook she was quitting her job, saying ‘it’s impossible to work for a killer and get paid by him.’

‘I know that right now many of you feel desperation, helplessness, shame over Vladimir Putin’s attack on the friendly nation of Ukraine. But I urge you not to despair,’ human rights activist Marina Litvinovich said in a video statement on Facebook, calling for mass protests Thursday evening.

‘We, the Russian people, are against the war Putin has unleashed. We don’t support this war, it is being waged not on our behalf,’ Litvinovich said.

But the authorities were having none of that.

In Moscow and other cities, they moved swiftly to crack down on critical voices. Litvinovich was detained outside of her residence shortly after posting the protest call. OVD-Info, a rights group that tracks political arrests, reported that 1,745 people in 54 cities had been detained by Thursday evening, at least 957 of them in Moscow. 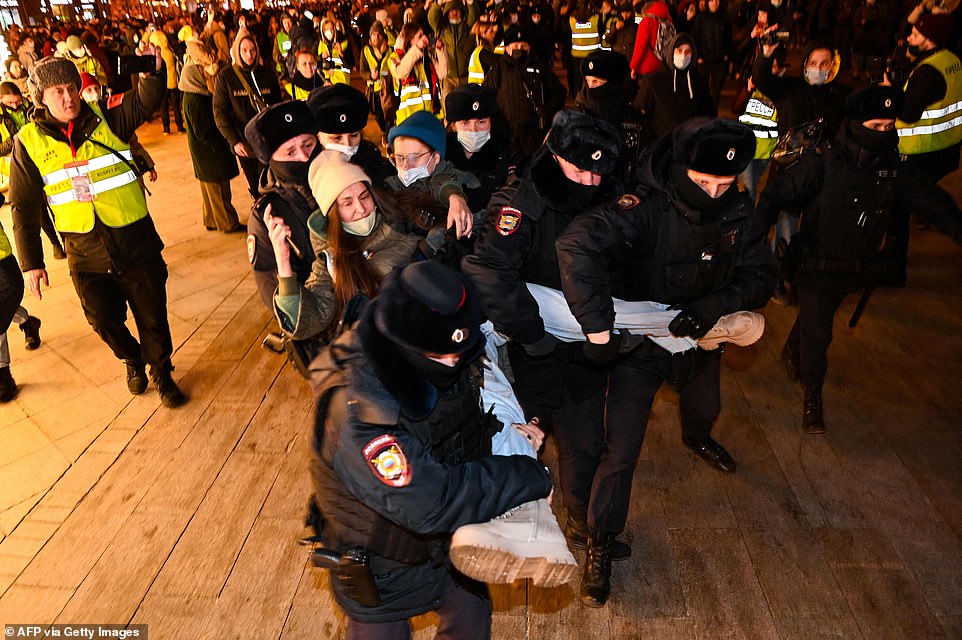 MOSCOW: Police officers detain a woman during a protest against Russia’s invasion of Ukraine 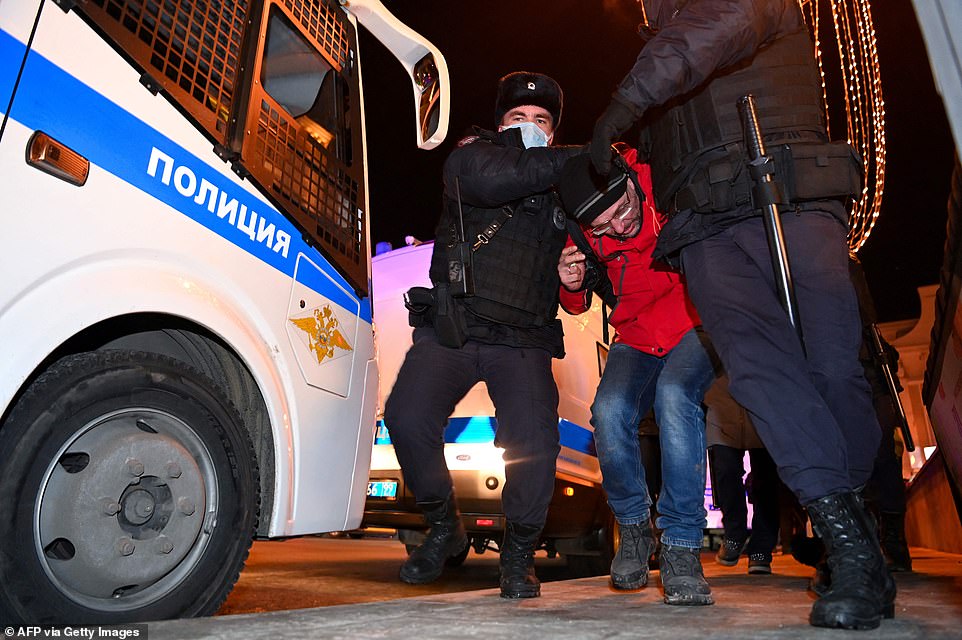 MOSCOW: Police officers drag a protester towards a police van in Moscow on Thursday night amid anti-war demonstrations 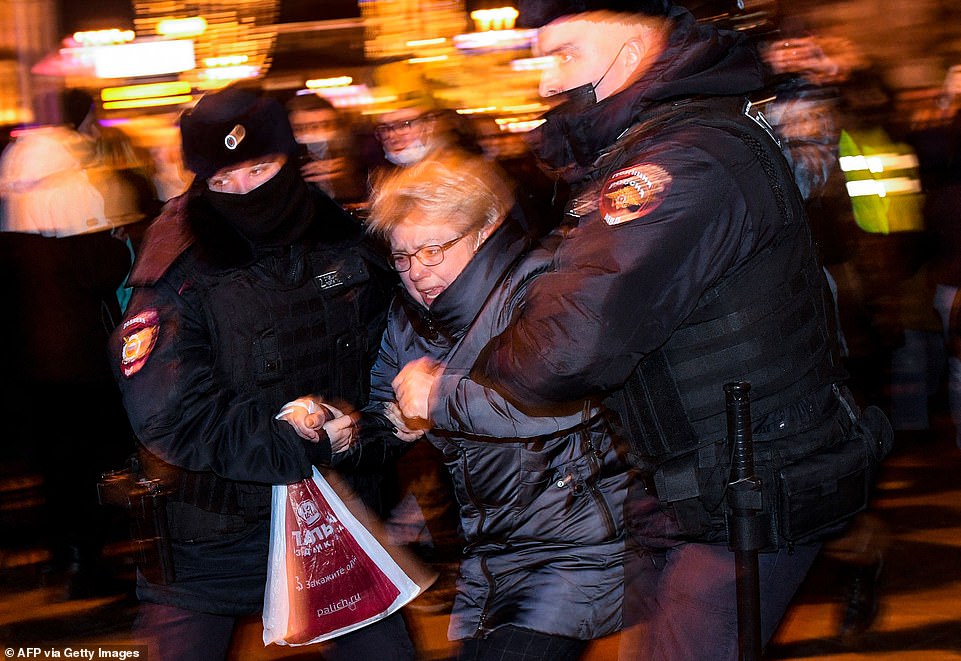 MOSCOW: Police officers detain a demonstrator during a protest against Russia’s invasion of Ukraine 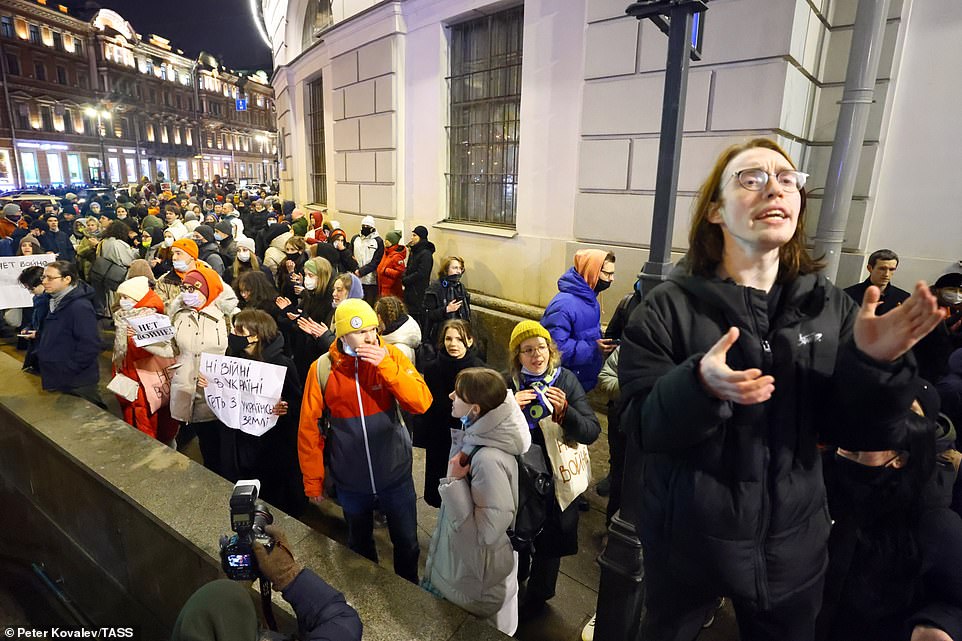 ST PETERSBURG: Demonstrators are seen during an unsanctioned anti-war protest after Putin announced his decision to launch a special military operation 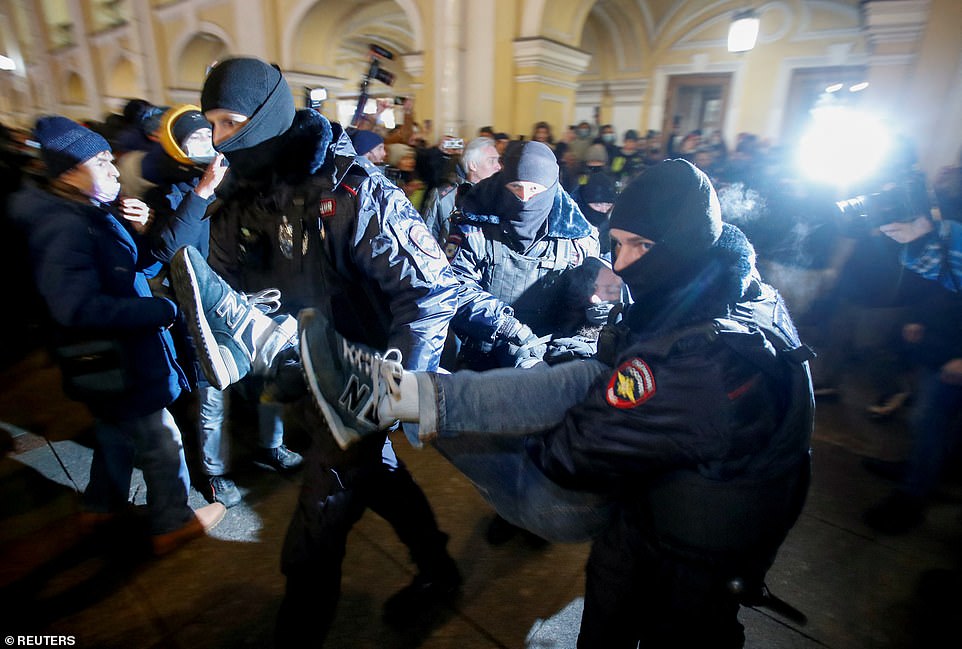 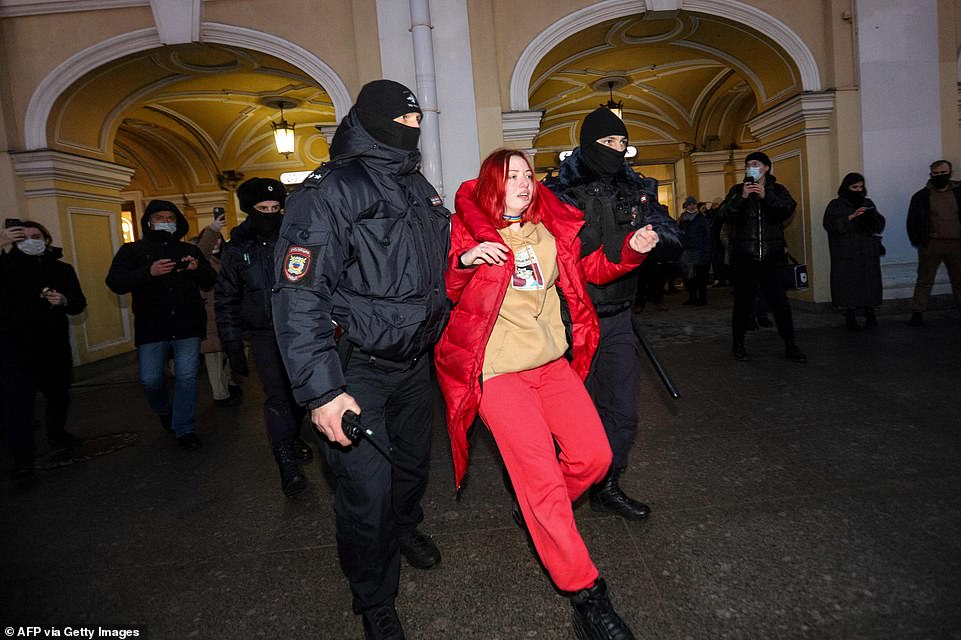 SAINT PETERSBURG: Police officers detain a woman during a protest against Russia’s invasion of Ukraine in central Saint Petersburg on February 24, 2022 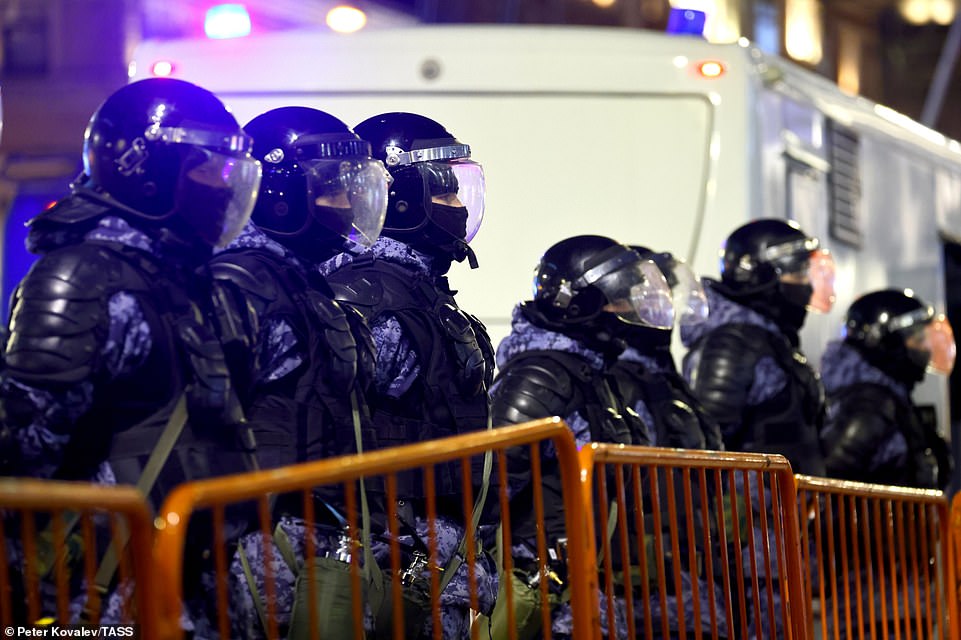 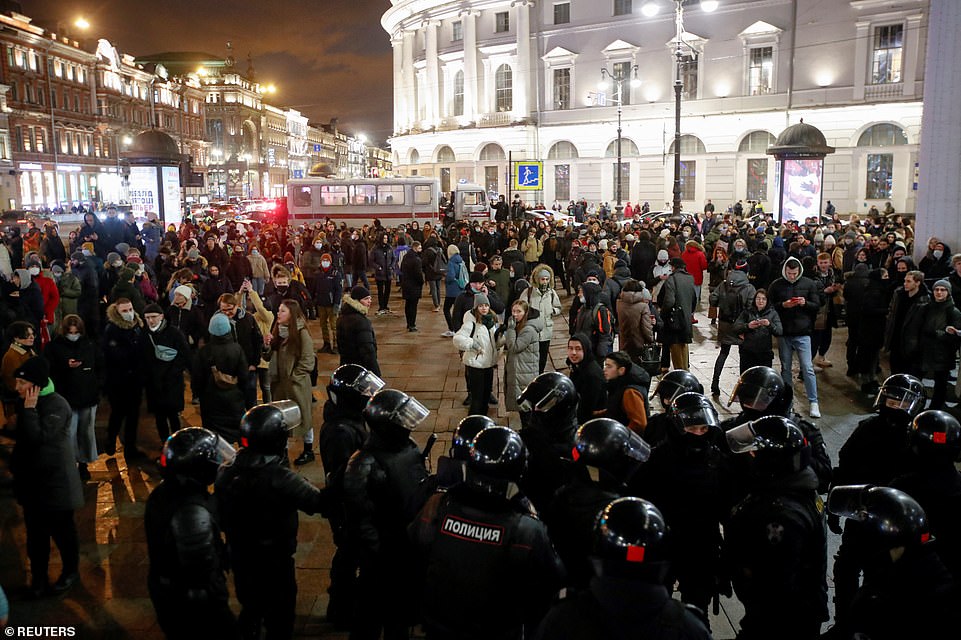 SAINT PETERSBURG: Armoured police gather in a square near demonstrators during an anti-war protest on Thursday night

Roskomnadzor, state communications and media watchdog, demanded that Russian media use ‘information and data they get only from official Russian sources.’ Some media reported that employees of certain state-funded companies were instructed not to comment publicly on the events in Ukraine.

Human rights advocates warned of a new wave of repression on dissent.

‘There will be new (criminal) cases involving subverters, spies, treason, prosecution for antiwar protests, there will be detentions of journalists and bloggers, those who authored critical posts on social media, bans on investigations of the situation in the army and so on,’ prominent human rights advocate Pavel Chikov wrote on Facebook.

‘It is hard to say how big this new wave will be, given that everything has been suppressed already.’

Russia’s official line in the meantime remained intransigent. Speaker of the upper house of parliament, Valentina Matviyenko charged that those who spoke out against the attack were only caring about their ‘momentary problems.’

State TV painted the attack in line with what Putin said in his televised address announcing it.

Russia 1 TV host Olga Skabeyeva called it an effort ‘to protect people in Donbas from a Nazi regime’ and said it was ‘without exaggeration, a crucial junction in history.’